From the New York Times bestselling author of The Revenge of Geography comes a sweeping yet intimate story of the most influential humanitarian you’ve never heard of—Bob Gersony, who spent four decades in crisis zones around the world.

“One of the best accounts examining American humanitarian pursuits over the past fifty years . . . With still greater challenges on the horizon, we will need to find and empower more people like Bob Gersony—both idealistic and pragmatic—who can help make the world a more secure place.”—The Washington Post

In his long career as an acclaimed journalist covering the “hot” moments of the Cold War and its aftermath, bestselling author Robert D. Kaplan often found himself crossing paths with Bob Gersony, a consultant for the U.S. State Department whose quiet dedication and consequential work made a deep impression on Kaplan.

Gersony, a high school dropout later awarded a Bronze Star for his service in Vietnam, conducted on-the-ground research for the U.S. government in virtually every war and natural-disaster zone in the world. In Thailand, Central and South America, Sudan, Chad, Mozambique, Rwanda, Gaza, Bosnia, North Korea, Iraq, and beyond, Gersony never flinched from entering dangerous areas that diplomats could not reach, sometimes risking his own life. Gersony’s behind-the scenes fact-finding, which included interviews with hundreds of refugees and displaced persons from each war zone and natural-disaster area, often challenged the assumptions and received wisdom of the powers that be, on both the left and the right. In nearly every case, his advice and recommendations made American policy at once smarter and more humane—often dramatically so.

In Gersony, Kaplan saw a powerful example of how American diplomacy should be conducted. In a work that exhibits Kaplan’s signature talent for combining travel and geography with sharp political analysis, The Good American tells Gersony’s powerful life story. Set during the State Department’s golden age, this is a story about the loneliness, sweat, and tears and the genuine courage that characterized Gersony’s work in far-flung places. It is also a celebration of ground-level reporting: a page-turning demonstration, by one of our finest geopolitical thinkers, of how getting an up-close, worm’s-eye view of crises and applying sound reason can elicit world-changing results.

An excerpt from The Good American

She was a displaced farmer from Chemba, near to the border of Sofala and Tete provinces, in central Mozambique. Her village was at the intersection of the great Zambezi River and one of its tributaries. She spoke to him through a translator in Sena, a Bantu language of the Mozambique, Malawi, and Zimbabwe border areas. He had found her wearing a black kerchief and blue blouse. She appeared as “quite self-possessed,” crouching on the dirt floor of the hut, and beckoning him to sit beside her on a chair. The government troops of FRELIMO had fled her village, she explained to him, and RENAMO soldiers closed in from several directions, forcing the villagers to the bank of the Zambezi. FRELIMO, the Front for the Liberation of Mozambique, had come to power as an anti-Portuguese guerrilla group, with some support from Cuba and the Soviet Union. But it couldn’t control the countryside where RENAMO, an indigenous African, anti-communist insurgency supported by apartheid South Africa, was on the rampage. RENAMO soldiers executed her niece, and soon afterward her niece’s nursing daughter died of hunger and exposure. The woman told him she saw half a dozen bodies up close: of two young boys and other women and children. There were more bodies still, but she didn’t have the courage to look at them. The woman and her own seven-year-old daughter then began to run but were chased into the big river by more RENAMO troops who had just arrived and were shooting at them, spraying the water’s surface with bullets. People drowned, trying to escape the barrage.

She told him that “she tried as best she could,” but exhausted, made the split-second choice to save herself and in a panic let go of her daughter, “who was swept away by the current and drowned.” She said that “God helped me to an island in the river,” where people from Mutarara, on the far side of the river, came with boats to evacuate them. She remained in Mutarara as a displaced person for five months. But then RENAMO attacked it and she fled again, helped by the cover provided by the outnumbered FRELIMO troops. She then walked roughly twenty miles north to a refugee camp across the border in Malawi. She remained at Makokwe camp in southern Malawi for three months. But “there was no future there,” she told him. So she crossed the border back into Mozambique, where she stayed in a transit camp by a railway yard in Moatize, which was mortared by RENAMO. Then she escaped to a displaced persons camp in Benga, in Changara district, west of Moatize. She had been in Benga four months when he interviewed her on Monday, February 29, 1988, the third person he had interviewed there, according to his diary.

He remembered each person he interviewed by a distinguishing characteristic that he marked down in his notes. That way he could remember them as individuals, and thus preserve their humanity. This interviewee was “the woman with the black kerchief.”

“The various expressions on her face, and the way she pronounced the words, were powerful and full of emotion. The moment she told me of letting go of her seven-year-old daughter’s hand in the great River, her hand slowly waved in the air, as if she were letting go again, and again.”

He had no children of his own yet, though he was already forty-three. But he was torn apart by the image of the woman’s decision between surviving herself and letting her own daughter drown. He never got used to the stories he heard.

She was the 143rd of 196 refugees and displaced persons of the Mozambique civil war he interviewed, traveling between camps that were separated by hundreds of miles in war zones in Malawi, Zimbabwe, Tanzania, and Mozambique itself. He was eating one meal a day, interviewing people like her during all the daylight hours, concentrating hard so as never to ask a leading question. He lived out of a tent with a sleeping bag and mosquito coil, writing in his lined notebook and typing by candlelight as there was no electricity, remembering each voice through his fingertips.

It was merely another day of work for him, just another assignment, like all the others in war and disaster areas of the developing world: assignments which continued—literally one after another—for four decades, on several continents. He was often lonely, depressed, but lived in fear of being promoted out of what he was doing. He was truly calm only while interviewing and taking notes. It was in such moments that he attained the quality of an ascetic, inhaling the evidence almost. For him, listening to these voices was like slow breathing. So he never stopped doing it.

The surroundings meant little to him. In his mind, the towering and interminable bush of Mozambique had been reduced to the lined pages of his notebooks, where his swift, graceful jottings became a sacred script: all he was able to remember were the stories that these refugees and displaced persons had told him.

He was not a journalist or a relief worker. He worked for the U.S. government in a very unusual capacity. He deliberately avoided publicity, and thus many of those who flock to war zones barely knew he existed. In any case, as someone who was at heart an introvert, he was easily ignored by them. They made legends out of other people, not out of him.

I first met him in a cheap hostel in Khartoum more than a third of a century ago as I write these words, and crossed paths with him over the decades in Somalia, Liberia, Ethiopia, the Sudan-Chad border, Nepal, and other places. He was everywhere the news was, and also where it wasn’t. Yet in a certain sense he was invisible, and he was happy that way.

To the media and the human rights community, Robert “Bob” Gersony was often the forgotten man.

This is his story.

It is the story of a son of Jewish Holocaust refugees who dropped out of high school, was awarded a Bronze Star in Vietnam, and then spent forty years interviewing at great length over eight thousand refugees, displaced persons, and humanitarian workers in virtually every war and disaster zone on earth as a special contractor for the U.S. State Department, the U.S. Agency for International Development, and the United Nations. The results were legendary “Gersony reports,” of which Mozambique was one. The story of “the woman with the black kerchief” made it all the way up to Secretary of State George Shultz and Maureen Reagan, whom Gersony briefed days after returning from the field.

It was a standard pattern for him: living in the bush for many weeks and then briefing high policymakers in person about his findings. They listened to him and often changed policy accordingly—making it smarter and more humane—because of the way that Gersony was able to ingeniously integrate a concern for human rights within the framework of national interest. For the two were inseparable in Gersony’s mind: a mind that eschewed grand schemes and was always emphatically loyal to the minutiae of the local situation, in which each far-flung place was a product of its own unique geography and history. Gersony’s life is about how the granularity of distant places defeats all theories. It is about how if foreign policy ignores the effect it has on individual human beings it descends into a realm of inhuman abstraction.

Indeed, this is the story of a man who epitomized the American Century more than anyone I know or was ever aware of. His story is that of the Cold War and the post Cold War, of America’s vast moral responsibilities in this world and its total immersion in it, which grew out of both America’s geopolitical necessities and its aspiration to be an exemplar of humanity. It is a story of fieldwork and reporting, of letting the facts emanate from the ground up—what in particular the State Department for so long was so great and indefatigable at, and which he so typified. And it is a story of the last golden age of American diplomacy, as he interacted with ambassadors, assistant secretaries of state, and others who were giants in their day: a day when the bureaucracy at all levels had sufficient money and rewarded talent.

This is as much a picaresque as a biography: a series of overseas assignments that make up an epic life.

Robert D. Kaplan is the bestselling author of twenty books on foreign affairs and travel translated into many languages, including Adriatic, The Good American, The Revenge of Geography, Asia’s Cauldron, Monsoon, The Coming Anarchy, and Balkan Ghosts. He holds the Robert Strausz-Hupé Chair in Geopolitics at the Foreign Policy Research Institute. For three decades he reported on foreign affairs for The Atlantic. He was a member of the Pentagon’s Defense Policy Board and the U.S. Navy’s Executive Panel. Foreign Policy magazine twice named him one of the world’s “Top 100 Global Thinkers.” 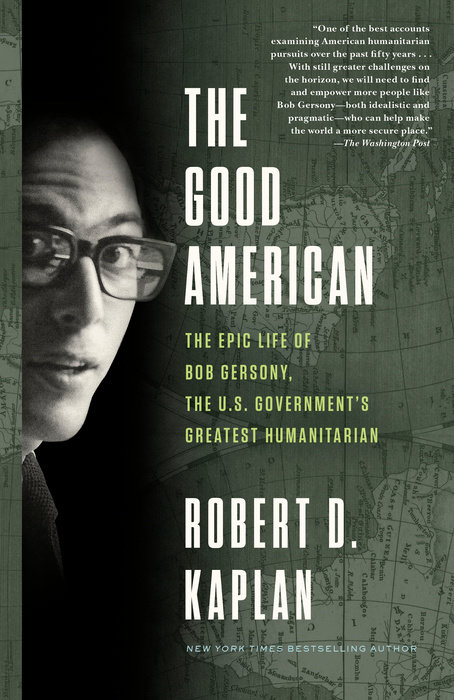