Balance Your Energy, Transform Your Life

Learn how to destress, recharge, and heighten your intuition by harnessing the power of crystals in this indispensable modern guide to the basics of ancient, elemental self-care.

Rose quartz, amethyst, tourmaline, and many other eye-catching crystals have captivated people for centuries—for healing, protection, or divination. Crystal healer Tamara Driessen sees these glittering stones as cosmic technology for navigating today’s hectic world, whether it’s boosting your confidence (Peacock Ore), conquering anxiety (Celestite), finding your center (Amethyst), or even getting over your ex (Kunzite).

In The Crystal Code, she brings her insight and experience to help you harness the earth’s energy to manifest harmony, health, and connection with ourselves on a deeper level. With Driessen as your guide, you’ll learn about

Loaded with vivid photographs, The Crystal Code also includes a comprehensive index to the colors and meanings of crystals. And Driessen’s mindful meditations and crystalized self-care rituals will help you follow your intuition, respect your body, and center your priorities.

Whether you’re a modern mystic, a new collector, or just crystal curious, this stylish, down-to-earth book will help you unlock the powers of these mystical stones to quiet your mind, enliven your heart, and transform your life.

An excerpt from The Crystal Code

Crystals have a way of magnetizing us, and it can happen in the most random places. Once, I was boarding a plane with my boyfriend – we were on our way home after four days of exploring Ibiza. We’d queued for what felt like for ever to board, and now we were waiting to find our seats on that no-frills aircraft. As a man reached up to put his bag in the overhead locker, my gaze was drawn to the huge Fluorite pendant he was wearing. I couldn’t take my eyes off it. ‘I love your crystal!’ I said. I was trying to play it cool and suppress my inner Gollum. He just nodded. I slunk into my seat.

I can’t help it. A crystal gets me every time. My eyes just want to be on it. I know I’m not the only person this happens to. There’s always a sense of familiarity, like being reunited with a long-lost friend ‒ ‘Where have you been all this time?’

Perhaps a few crystals have found their way into your life and their magnetic pull makes you want to keep them close. They may feel as if they fit perfectly with you and your life as you hold them; the missing piece to your jigsaw puzzle.

The thing is, they’re more than just lucky rocks.

I must have been about eight when I bought my first crystal. We were on a half-term trip to the Natural History Museum in London. I chose a light pink Rose Quartz instead of a dinosaur stationery set from the gift shop. I loved that rock because, although I didn’t know why, it comforted me. Since then, I’ve always had at least one crystal at my side – or in my bra.

As a teenager I’d carry a piece of Tiger’s Eye so that I’d feel more confident – it gave me the courage to ignore the bullies in my class. And I bought myself a Garnet ring from Elizabeth Duke in the Argos catalogue because I’d read in one of my nineties teen magazines that it would attract a boyfriend. It worked!

In my twenties, I had a constant knot of anxiety that I’d attempt to numb with food, partying and being a chronic people-pleaser. I felt as if I was constantly chasing my tail, trying to escape my inner critic. I thought that if I made everyone else happy, I’d be happy. I was wrong. Amethyst and Citrine were my allies in overcoming regular panic attacks, anxiety, depression and a long-term eating disorder. These crystals have calmed my overactive mind, decluttered my thoughts and guided me to trusting that I deserve to be happy before anything else.

While my collection has grown, I’ve learnt more about crystals through my personal practice, and from the crystals I’ve intuitively given to friends, with notes of their powers – always confirmed to be the medicine they needed.

A few years ago Lee, one of my housemates, was holding my beloved Clear Quartz cluster: ‘How do they make them? Are they stuck together?’

No one had ever asked me this before. ‘They’re mostly formed when the earth began, and some take millions of years to form, in caves or underground.’ I googled the Selenite Cave in Mexico to show him what I meant. It can be hard to believe that these formations are native to our own planet when you think of the urban jungles a lot of us live in.

He zoomed into the picture for a better look. ‘Why doesn’t yours look like this cave?’

‘Crystals are made of minerals, and every crystal has its own composition, which gives it its colour and shape. This also depends on where in the world they form. Like, different countries or places have different terrains. Some are man-made but the natural ones are my favourites.’ I showed him a piece of rainbow-infused crystal – Angel Aura – so that he could compare the difference between a heat-treated crystal and a natural specimen.

‘But why do you have so many? What do you do with them?’

‘I use them for healing. They’re full of good vibes.’

‘According to scientists, they’re made of particles that hold energy. These particles are tightly compacted but have the smallest amount of space for movement, which can emit a vibration. Even though we can’t see it, crystals vibrate.’ I knew he suffered from anxiety and offered to make him a crystal healing elixir – water infused with the energy of crystals.

He was open to the idea and drank it to humour me. The next day he asked me to make it for him again, and ‘borrowed’ some of my crystals. My affinity with the realm of crystals has led me to study various crystal bibles and guides, attend crystal healing workshops and courses, and explore the power of crystals with a shaman in Bali. I wanted to consolidate what I was learning with facts and confirmed knowledge so that I could work with crystals as a professional healer and share what I was discovering.

Every crystal has its own personality that can initially be interpreted through colour, shape, the amount of light that shines through it or, if it’s opaque, how much light it absorbs. (See the Crystal Guide, page 111). Likewise, I believe that the crystals you choose say a lot about your personality and pursuits.

Although I have a vast selection of crystals, I’m drawn to some again and again. It’s like when you buy a new lipstick: you feel amazing when you try it on but when you get home you realize it’s more or less the same as all the others in your make-up bag. I went through a stage of doing this with Amethyst. I’m an Aries and a born over-thinker. During my teens and twenties I overanalysed everything – the way I looked, the things I said, the decisions I made, how I perceived the way other people acted towards me. It was exhausting. I was blocked from my intuition because my brain was so cluttered. That was until Amethyst came along. Whenever I connect with Amethyst, everything slows down and time seems to expand. The words ‘Chill out’ come to mind.

Tamara Driessen (a.k.a. Wolf Sister) is a crystal healer, shamanic practitioner, reiki master and tarot advisor. She's an intuitive healer who infuses mystic wisdom into everyday life. She trained with a shaman in Bali and now runs regular moon ceremonies and crystal healing workshops in the UK and beyond. She is the author of the bestselling book The Crystal Code.

Balance Your Energy, Transform Your Life 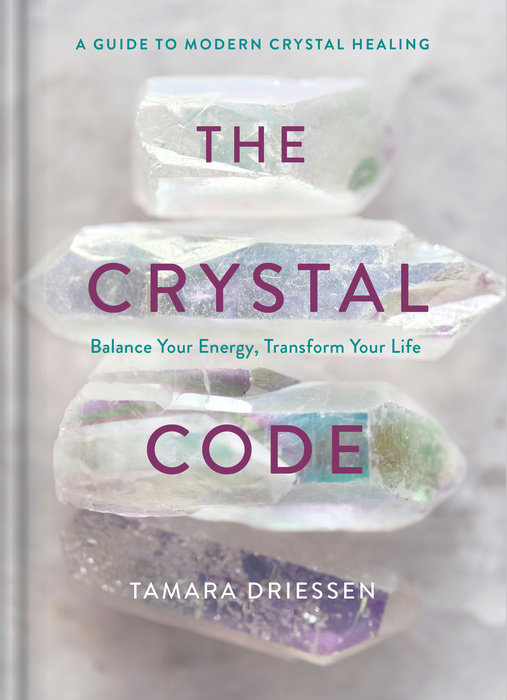