See how the story of Jamie Frasier and Claire Beauchamp Randall comes to life on the screen with this official, photo-filled companion to the third and fourth seasons of the hit Starz television series based on Diana Gabaldon’s bestselling Outlander novels.

From its very first episode, the Outlander TV series transported its viewers back in time, taking us inside Diana Gabaldon’s beloved world. From the Scottish Highlands to the courts of Versailles to the shores of America, Jamie and Claire’s epic adventure is captured in gorgeous detail.

Now travel even deeper into the world of Outlander with this must-have insider guide from New York Times bestselling author and television critic Tara Bennett. Picking up where The Making of Outlander: Seasons One & Two left off, this lavishly illustrated collectors’ item covers seasons three and four, bringing readers behind the scenes and straight onto the set of the show. You’ll find exclusive interviews with cast members, including detailed conversations with Caitriona Balfe and Sam Heughan (on-screen couple and real-life friends), as well as the writers, producers, costume designers, set decorators, technicians, and more whose hard work and cinematic magic bring the world of Outlander to life on the screen.

Every page features gorgeous full-color photographs of the cast, costumes, and set design, including both official cast photography and never-before-seen candids from on set. The Making of Outlander: Seasons Three & Four is the perfect gift for the Sassenach in your life—and the only way to survive a Droughtlander!

An excerpt from The Making of Outlander: The Series

There are things that every show shares—the long hours, the rewrites, and the difficulty of location scouting, to name a few. But what the creative team on Outlander discovered after two seasons is that their show will always be a beast to produce, no matter how well oiled the machine they’ve created. Diana Gabaldon’s books get more ambitious with each entry in the series, featuring multiple time lines, changing eras, exotic locales, and an everexpanding ensemble.

For the adaptation of Voyager as Outlander’s third season, the biggest decision executive producers Ron D. Moore, Maril Davis, Matthew B. Roberts, and producer David Brown made was to leave Scotland and relocate to South Africa for the last half of the season, a huge undertaking for any series to make. “Every year we try to come in more prepared,” Maril Davis explains. “There’s nothing better than having material early, but you can never prepare for the unexpected. Season three—perhaps at first we underestimated. We thought that, certainly, the move to South Africa would be daunting, but I don’t think we realized how daunting it all would be.”

“For instance, in the first half of season three, which I think is some of the best work we’ve done, we underestimated how difficult that would be, to do several different time periods,” David Brown continues. “We had Claire back in the forties, fifties, sixties. Then, we had Jamie back in the 1700s. There were so many hair [issues]. Certainly, for Gary [Steele] and his team, it was an immense hurdle to have to keep changing the Boston apartment for each decade.”

Although Outlander adopted cross-board shooting—shooting everything needed in blocks from any of the season’s scripts, even if out of chronological order, to keep costs down—the coordination and scheduling was still massive.

Behind the scenes, the day-today duties of the series also shifted. “The third season felt like the time to delegate more,” Ron Moore explains. “I was definitely ready to stop being on the treadmill between Scotland and Los Angeles. It was time to give other people a chance to experience responsibility and authority and to come into their own. Matt, in particular, we started to give him more things to do, and Maril, and Toni Graphia. I think it creates, in the broader sense, a healthier business, because you’re essentially mentoring and training people to discover their own talents and learn more. Then they can take that and make other great shows.

“So I knew at the outset that episode one of season three was probably going to be the last first draft that I sat down and wrote for Outlander,” Moore admits. “That had a certain bittersweet quality to it, but it meant I would spend more time in editorial and postproduction in Los Angeles, which is one of my other great loves. Also, just generally speaking, I was starting to think about other [TV series] in development.”

Davis then began to travel back and forth more from Los Angeles to Scotland and eventually South Africa. “Matt started spending most of his time exclusively in Scotland in season three and really kept that ship afloat there. My job does not require me to be on set, as we always have a covering producer. But I like to be on set, because I like to know what’s going on. I deal with casting, publicity, directors, and writers. So having Matt there for me, and for Ron, is essential. He is operating in a director-producerwriter role.”

As the man on the ground for two years, shooting second unit, problem-solving, liaising with cast and crew, and writing, Roberts was ready to invest even more, including taking point with David Brown on transitioning their team to a new country for several months. “Knowing where the story was going, we had already started to look way down the road, because we knew we needed ships and the Caribbean,” Roberts says. “For the first half of the season, we knew that half of the stories would be in Scotland, and that was a great thing because we were in Scotland. But to make that even more challenging, we were going to [make it into] period Boston, which makes it more exciting.”

Of course, before anything else, the Outlander writers’ room convening in Los Angeles represented the official kick-off of season three. “We were shooting season two and they started a pre-room early to break down the book,” Roberts explains. “So I was on the phone a lot and reading the [script] notes.”

In the room, Moore, Davis, Graphia, and Roberts, initially remotely, were guiding the writing staff on how to dissect the big plot points from Voyager into the thirteen individual episodes for the season. From the top, they decided that Jamie and Claire would be in separate times and narratives until the huge printshop reunion, which is beloved by fans of the books.

“Before the season even started, people were already asking the question of how long are you going to keep them apart?” Graphia remembers. “I would see people theorizing online. So we made the rule for ourselves that we will show them but never in the same frame. We wanted to do the sweet torture of keeping them apart for as long as we could. It’s kind of the cardinal rule of TV writing; you don’t keep your leads apart. But we found a way to make the scenes about the two of them without having them both in the scene. We kept them alive as a couple even though they weren’t together.”

Roberts adds, “The only time we [broke that] was once in the very beginning, in Culloden, where Claire comes to Jamie in a dream, and that’s it. We wanted the audience to wait for their big reunion, because we knew that was going to be the fulcrum of the season. The story really changes after that anyway. Getting back together is the first half. And then rescuing Ian is the second half.”

“And we always planned the reunion to be episode six,” Graphia clarifies. “I know that was way later than people were expecting,” she chuckles. “Even the network was like, ‘What do you mean, six?’ I think they expected us to do it around three.”

With the outline in place, Moore says, the writers then had to figure out how to show twenty years of living, on both sides, in the first five hours. “To separate these two characters and to move through this big chunk of time in their lives, every moment had to count,” he emphasizes. “Every moment had to be chosen, not just because it was an interesting part of their lives, but because it also advanced the story and advanced the character’s story along.

“The book neatly delineated Jamie’s story into chapters,” Moore continues. “Our first task when we sat down was, ‘Let’s start with the Jamie story, because those are each going to be an episode, and let’s lay out those episodes.’ Then we said, ‘Now we need a Claire story that goes along with that,’ and that was more complicated, because you were drawing from various sources and the time lines didn’t neatly line up. You couldn’t have the same passage of time in Jamie’s world and the same passage of time in Claire’s world. There was a lot of complexity to try to figure out how Claire’s story would mimic in some way Jamie’s story over these multiple episodes. That’s what took the most work. The Claire story definitely got reworked several times, whereas the Jamie one was always kind of clear.”

The writers also learned from their previous two seasons that they had to figure out how to honor Gabaldon’s narratives but be confident to take their own story path sometimes. “The way Diana tells stories is different than the way you have to tell them onscreen,” Roberts details. “An event might take place in the book, and Diana will skip over it in the moment. We can’t do that. We have to tell it in the moment, or it doesn’t play. So, those are the big things that we have to adjust. We also have to deal with other living people, who are directors and actors, and production designers, and costume designers, who bring in their own interpretation of things that are on the page. When you bring it all together, it’s so collaborative. And there were multiple times we wanted to put people together and they just weren’t available, so we have to tell a different story.”

Tara Bennett is a New York Times bestselling author and entertainment journalist. As an author or co-author she’s written more than thirty official movie and TV companion books including Sons of Anarchy: The Official Collector’s Edition, The Official Making of Big Trouble in Little China, Fringe: September’s Notebook, the impending official history of Marvel Studios, and many more. Tara Bennett is also a senior producer and podcast host for Syfy Wire, a U.S. editor for SFX magazine, and a feature writer for Sci Fi magazine and Total Film. She is a TCA member and an adjunct professor of radio, television, and film at Rowan University. 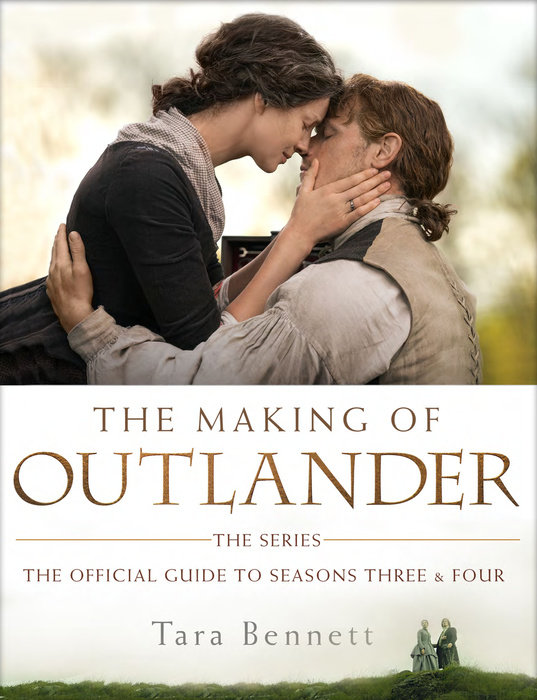