How to Design a Creative and Comprehensive Homeschool Curriculum

A comprehensive guide to designing homeschool curriculum, from one of the country’s foremost homeschooling experts—now revised and updated!

Homeschooling can be a tremendous gift to your children—a personalized educational experience tailored to each kid’s interests, abilities, and learning styles. But what to teach, and when, and how? Especially for first-time homeschoolers, the prospect of tackling an annual curriculum can be daunting. In Home Learning Year by Year, Rebecca Rupp presents comprehensive plans from preschool through high school, covering integral subjects for each grade, with lists of topics commonly presented at each level, recommended resource and reading lists, and suggestions for creative alternative options and approaches. Included, along with all the educational basics, are techniques and resources for teaching everything from philosophy to engineering, as well as suggestions for dealing with such sensitive topics as sex education.

Now revised throughout with all-new updates featuring the most effective and up-to-date methods and reading guides to homeschool your child at all ages, Home Learning Year by Year continues to be the definitive book for the homeschooling parent.

An excerpt from Home Learning Year by Year, Revised and Updated

To School or Not to School

Thank goodness I was never sent to school; it would have rubbed off some of the originality.

Today, about two million kids in the United States are homeschooled. Reasons for homeschooling choices vary: In a 2016 survey conducted by the National Center for Education Statistics, 80 percent of parents cited concern about a negative school environment, and 61 percent were dissatisfied with the quality of public school academics. Some had moral or religious issues. Others mentioned the importance of family togetherness and the benefits of nontraditional or small-scale individualized instruction.

Some choose to homeschool from the very beginning. Others make their decisions following unhappy experiences with public or private schools, variously describing emotional, physiological, and intellectual miseries—everything from temper tantrums to tummy aches to chronic academic boredom.

According to the 2018 Phi Delta Kappa (PDK) poll of attitudes toward public schools, 81 percent of participants nationwide give the public schools a grade of C or lower; and in a Gallup poll of 2019, 62 percent of pollees pronounced themselves somewhat or completely dissatisfied with the quality of public education. Communities still support their local schools, and we all know many teachers who are wonderful and talented educators and dedicated troupers—but there’s no getting around the fact that public education, as practiced in the United States, has serious problems.

Exactly why is a matter of contention. According to educators, reasons for the schools’ struggles include lack of funding; lack of parental involvement and support; gaping socioeconomic divides among students’ families; invasive screen and social media technology; lack of innovation in teacher education; mediocre textbooks; bullying; and the nature of school culture itself, which reinforces conformity, obedience, and the ability to shut up and sit still all day long.

Another potential culprit is increasing school size: educational research indicates that bigger doesn’t always mean better. School consolidation, heavily promoted by school districts attempting to save money, makes for centralized schools catering to hundreds or even thousands of pupils—and these, with escalating discipline problems and declining levels of academic achievement, can resemble nothing so much as boot camp. Small schools may not be able to afford the splashy range of activities available at large ones, but there are real emotional advantages to small neighborhood schools, where civility rules and everybody knows your name.

Academically, our current school system, despite all the effort that professional educators put into it, doesn’t seem to be doing us any favors. According to the National Assessment of Education Progress (NAEP), fewer than 40 percent of graduating high school seniors have adequately mastered reading and math. On the Program for International Student Assessment (PISA), a worldwide exam administered every three years to 15-year-olds in seventy-two different countries by the Organization for Economic Cooperation and Development (OECD), the United States is less than impressive: in 2015, for example, our kids ranked fortieth in math, twenty-fourth in reading, and twenty-fifth in science.

A major part of our problem may be our obsession with those very tests. “Our schools will not improve if we value only what tests measure,” writes educator Diane Ravitch in The Death and Life of the Great American School System (Basic Books, 2010). “Not everything that matters can be quantified. What is tested may ultimately be less important than what is untested, such as a student’s ability to seek alternative explanations, to raise questions, to pursue knowledge on his or her own, and to think critically and creatively.”

Another point for the anti-test crowd is the overwhelming success of essentially testless schools, most famously those of Finland. Finnish kids are routinely among the top PISA scorers, but in general no kid in Finland takes a standardized test until the end of their senior year in high school. Says Finnish educator Pasi Sahlberg, “We prepare children to learn how to learn, not how to take a test.”

Formal education in Finland doesn’t begin until the age of 7, and while kids spend time in the classroom, they also spend a good chunk of the day outdoors. Children get a lot of individual attention, and each school has a welfare team, whose purpose is to ensure student happiness. Schools are wholly funded by the federal government—which means that the quality of student education isn’t dependent on local economies or parental income. School policies are driven by vetted independent research, which means that the Finnish educational system is resistant to the ups and downs of politics—and teachers, viewed as respected professionals, have the freedom to design and implement their own curricula.

So why can’t the United States simply do what Finland does? Sahlberg points out that we can, provided we’re willing to make fundamental changes to our current system. One of the most sweeping would require social change to establish student equality. Equality is a watchword in Finnish education; rather than the American schools’ vast differences in services and performance levels, Finnish schools are pretty much the same across the board, all with equal access to quality instructors and public support. And all Finnish citizens, by law, have access to childcare and healthcare in their communities, and a right to a free education from preschool to university. We could level our playing field too—but we haven’t done it yet, and we’ve got a long way to go. And clearly it’s not a priority among politicians: just a tad over 3 percent of the federal budget goes to fund education.

If standardized tests aren’t the be-all and end-all of academic achievement, how else to assess the public schools? One approach might be to track students’ responses to their learning experiences—which again paints a sorry picture. Surveys show that the majority of high school students find school tedious and boring—and bored, unmotivated kids don’t learn well. There’s a price to be paid for this later: while about 65 percent of American high school graduates go on to college, many are unprepared once they get there. One-fifth of students enrolled in four-year colleges and half of community college kids need remedial education. Similarly, about a fifth of students at four-year colleges and a third of community college attendees drop out after just one year—which means that while the United States has one of the highest rates of college entry in the industrialized world, it’s far down the list in terms of college completion.

Choosing a mode of education for one’s kids is one of the most difficult decisions parents make. Which is best: public school, private school, alternative school, homeschool? Should they go to preschool? Should they try a Montessori or Waldorf school? Which system will enable our kids to grow up healthy, happy, ethical, self-sufficient, tolerant, mannerly, compassionate, and intellectually above average?

Kids succeed in any number of learning environments, and which works best when and for whom is hard to predict. Josh, Ethan, and Caleb, our three sons—now all adults—never went to public school, barring an odd class here and there. All went on to college—two to Bennington College, one to Clarkson University—and two, so far, have gone on to obtain master’s degrees, Josh from the New School in New York City and Ethan from Carnegie Mellon University in Pittsburgh. All three, from birth on, were educated at home, a process that was fascinating, exciting, and deeply rewarding—though not always smooth sailing. We all remember the days when I threatened to send them to military boarding school in Oklahoma, and when they threatened to run away from home and live in trees. Some days, believe me, are just like that.

Homeschooling is a learning experience for everyone involved. Randy, my husband, and I figured that at-home learning would resemble our own more or less orderly, workbook-laden progression from alphabet books to English literature, arithmetic facts to algebra. What we got from our kids instead were a lot of strong opinions and passionate enthusiasms for everything from Egyptology to rocket models, submarines, Shakespeare, and ant farms. Nobody liked workbooks. One kid sneered at the multiplication tables (“Come on, Mom. That’s what calculators are for!”). One balked at geography (except for—don’t ask me why—islands). One spent months demanding, as bedtime reading, excerpts from The Encyclopedia of Fish. It’s in this eccentric way that kids learn best—but it’s not possible in the one-size-fits-all atmosphere of the public schools.

REBECCA RUPP has a Ph.D. in cell biology, has written for many professional journals and national magazines, and has published several books. She lives in Vermont with her husband and three sons, with whom she shares a tractor, a telescope, and a toboggan. Alliteration helps her remember, though mostly she forgets things unless she writes them down.

How to Design a Creative and Comprehensive Homeschool Curriculum 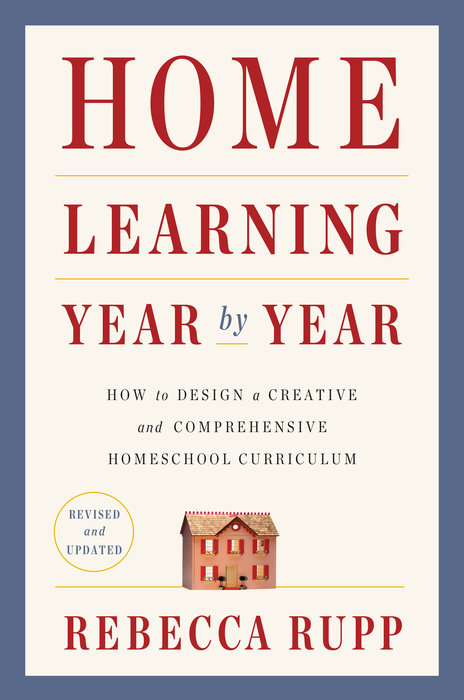