NEW YORK TIMES EDITORS’ CHOICE • An “extraordinary” (The New York Times Book Review) tender and vivid memoir about the radical grace we discover when we consider ourselves bound together in community, and a moving account of one woman’s attempt to answer the essential question Who are we to one another?

“Your heart will be altered by this book.”—Gregory Boyle, S.J., New York Times bestselling author of Tattoos on the Heart

Liz Hauck and her dad had a plan to start a weekly cooking program in a residential home for teenage boys in state care, which was run by the human services agency he co-directed. When her father died before they had a chance to get the project started, Liz decided she would try it without him. She didn’t know what to expect from volunteering with court-involved youth, but as a high school teacher she knew that teenagers are drawn to food-related activities, and as a daughter, she believed that if she and the kids made even a single dinner together she could check one box off her father’s long, unfinished to-do list. This is the story of what happened around the table, and how one dinner became one hundred dinners.

“The kids picked the menus, I bought the groceries,” Liz writes, “and we cooked and ate dinner together for two hours a week for nearly three years. Sometimes improvisation in kitchens is disastrous. But sometimes, a combination of elements produces something spectacularly unexpected. I think that’s why, when we don’t know what else to do, we feed our neighbors.”

Capturing the clumsy choreography of cooking with other people, this is a sharply observed story about the ways we behave when we are hungry and the conversations that happen at the intersections of flavor and memory, vulnerability and strength, grief and connection.

An excerpt from Home Made

The House is a two-­story redbrick building, like the one the Big Bad Wolf couldn’t blow down. It sits on a busy city corner, across from a funeral home on one side and an animal shelter on the other. One half mile to the left of it live some of the poorest people in the city of Boston; one half mile to the right live some of the richest. Gerry calls this the world’s longest socioeconomic mile, and he says that there are strategy and symbolism in his having chosen this location for the headquarters of his agency. The doors, porch, and shutters that frame each window are painted a bright, flat Crayola green. There’s usually graffiti to the left or right of the back door, which was rarely locked during daylight hours. The stairs leading up from the street make an aching sound when you walk on them; covered in carpeting the same gray as the sidewalk outside, they connect the building’s two floors. The agency offices were located on the first, and one of the residences the agency ran for youth in state care was on the second, before everything changed. The residence upstairs from my dad’s office was one of the boys’ programs. At a given time, it housed up to eight of the agency’s adolescent clients age fourteen to nineteen who were designated wards of the state, referred through other human service agencies, often after removal from their homes, failed placements with foster families, or short stays in juvenile detention facilities. For them, the House was a temporary group home placement, or at least somewhere to sleep and eat. It used to seem to me that upstairs and downstairs were two clearly divided worlds. Whenever I was at the House as a kid, it was to wait for my father, for a ride home. I’d sit in the waiting room on the couch, which was beige, the way that things that could be anybody’s things are beige. Sometimes I would hear raised voices, or the thud of a basketball being dribbled hard against the other side of the ceiling. But for the first twenty-­six years of my life, I never went upstairs.

I went to the House to speak to Gerry a few days after receiving his voicemail. Ostensibly, I wanted to discuss the meeting he had scheduled for me with the residents. But really, this visit was a kind of dry run; I didn’t want my first time back in the House after my father’s death to be the night I met the kids. I didn’t know how it would feel to be there without my father, and I didn’t want to be messy; I knew I was already fighting other stereotypes. What would the boys think of me, or think I was trying to be? I took a deep breath before going in, noticing the veins in the late-­September leaves on the tree between the House and the street, gilded in a final jolt of beauty before their inevitable fall. I pressed my hand against the familiar green door and it was open, so I went inside.

I walked up to the first-­floor landing and turned the worn brass knob on the door that led to the office, like I had so many afternoons before. Inside, it looked and smelled the same: the walls, the floor, the stale coffee from that morning still in the coffeepot, the stack of magazines by the entryway. Gerry hadn’t changed anything in the building since my father’s last day, except for the ceiling, which he reluctantly allowed to be patched when someone warned him that if he didn’t, it would fall in.

I made my way to the administrative coordinator’s desk and told her I was there to talk to Gerry. My heart pounded. I stared at the typewriter as it sat in the front office. I remembered my dad at that exact typewriter: the mechanical clink as he filled in forms and typed up budgets, the tink-­tink of each letter being hit, the clack and whoosh at the end of a line. His exasperated “Shit!” and slow plack-­plack of backspacing. I could almost see his solid frame hunched over the outdated machine, glasses perched on his nose, bushy eyebrows furrowed in thought, hands moving slowly over the keys, silk tie thrown over his shoulder to save it from getting sucked in.

“I know, you’d think since we have computers, we could just get rid of that thing,” the administrative coordinator said. “But Gerry won’t let me. It’s kind of ridiculous. You must be Liz.”

I averted my eyes from the doorway to what had been my father’s office, across the hall. I didn’t want to see the pastel drawing of the House that he had commissioned by a local artist, or his chair or books or phone. Especially his phone. That phone looked ugly, plastic, and nondescript. But his for years, it had the patina of the diminishing supply of things he had touched.

I asked the administrative coordinator if she thought a cooking program might work upstairs.

As we were talking, one of the boys walked in. He was Black, had caramel-­brown eyes, stubble grabbing at his chin, and his head and shoulders tilted to one side. I had no idea how old he was, except that he was old enough to grow a beard but young enough to not live on his own. “You know when we’re going to get our fall clothing allowance checks?” he asked. “’Cause I found some sneakers I like and I’m not sure how long they’ll have my size.”

“I think soon,” the administrative coordinator replied, and then introduced us. “Leon, this’s Liz. She might be starting a cooking program upstairs. And Liz, this’s Leon.”

“Hey, Leon,” I said, reaching out to shake his hand. He looked familiar.

“Nice to meet you,” Leon said, placing his left hand over his stomach as he shook my hand, looking at me more out of his left eye than his right. “You’re pretty tall, actually.” The old floorboards creaked beneath us as he shifted from one foot to another.

“Nice to meet you, too,” I said. I noticed that he was a few inches shorter than me, but I didn’t say. I was used to people commenting on my height; I stand almost six feet tall and little kids, male students, and elderly folks tend to mention it. “I am pretty tall, and I think, maybe, we’ve met before. At Gerry’s party.” In February of that year, Gerry’s wife had thrown him a seventieth birthday gathering. I’d stopped by with one of my sisters on our way to a basketball game with season tickets still printed in our dad’s name. The event was a blur, except that I was sure I’d met Leon, briefly. I didn’t remember his name, but I recognized his face. Meeting him and the other kid he was with at the party was part of what inspired me to resuscitate the cooking project idea.

He looked at me again. “Oh yeah, I was there. I think I remember you.”

“You might not,” I said. “There were a lot of people there.”

“Yeah, I mean, I think I remember. But I met a lot of people that night,” he said.

“Do you think the guys upstairs would be interested in cooking?” I asked.

“I was thinking more of a we all cook, then we all eat kind of thing,” I said.

He thought about this for a second. “Tell you the truth,” he said, “I think people would be more interested in my idea: you cook, and we eat.”

“You’re probably right,” I agreed. “But would you help if we tried everybody cooking and everybody eating?”

Leon looked at me. “Yeah, I mean I’ll probably help. ’Cause I’m like that,” he said, his eyes widening. “But I’m not sure about anybody else.”

“Maybe if you do, other people will, too,” I suggested.

“Maybe.” He shrugged. “But you don’t know these people.” His tone was somber, as if he were prepping me for a business meeting with foreign clients.

As Leon shook my hand goodbye, I decided that if he agreed to help, cooking could work. I headed toward Gerry’s office and noticed the same old beige couch in the waiting room at the other end of the hall.

Gerry heard me coming and leaned into the hallway. “I’ve got to take an unexpected call,” he said. “But you’ve met Leon. You’ll come on Tuesday and meet the others. Are we still on?”

I said yes, and Gerry asked if there was anything else.

But there was no time for orientation. Our logistics meeting was over before it began. I figured there must be a stove and refrigerator upstairs, and hoped Leon would show up like he said he would so there’d be at least one participant. Everything else was negotiable.

Liz Hauck is an educator and writer from Boston, Massachusetts. She has worked in three schools and one hospital, and her community service projects have included teaching literacy in a shelter for people surviving homelessness, digging an outhouse on a mountain in Virginia, and cooking with teenagers who were in state care. She’s currently completing her Ph.D. in educational policy studies and history at the University of Wisconsin-Madison, and she holds a B.A. and M.Ed. from Boston College. Home Made is her first book. 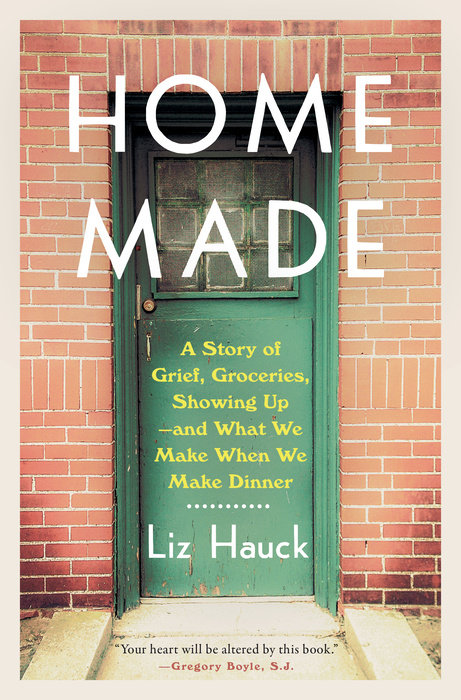