What happens when Americans lose their jobs?  In American Made, an illuminating story of ruin and reinvention, Pulitzer Prize-winning journalist Farah Stockman gives an up-close look at the profound role work plays in our sense of identity and belonging, as she follows three workers whose lives unravel when the factory they have dedicated so much to closes down.

Shannon, Wally, and John built their lives around their place of work. Shannon, a white single mother, became the first woman to run the dangerous furnaces at the Rexnord manufacturing plant in Indianapolis, Indiana, and was proud of producing one of the world’s top brands of steel bearings. Wally, a black man known for his initiative and kindness, was promoted to chairman of efficiency, one of the most coveted posts on the factory floor, and dreamed of starting his own barbecue business one day. John, a white machine operator, came from a multigenerational union family and clashed with a work environment that was increasingly hostile to organized labor.

The Rexnord factory had served as one of the economic engines for the surrounding community. When it closed, hundreds of people lost their jobs. What had life been like for Shannon, Wally, and John, before the plant shut down? And what became of them after the jobs moved to Mexico and Texas?

American Made is the story of a community struggling to reinvent itself. It is also a story about race, class, and American values, and how jobs serve as a bedrock of people’s lives and drive powerful social justice movements. This revealing book shines a light on a crucial political moment, when joblessness and anxiety about the future of work have made themselves heard at a national level. Most of all, American Made is a story about people: who we consider to be one of us and how the dignity of work lies at the heart of who we are.

An excerpt from American Made

My journey into the lives of Rexnord factory workers began on election night of 2016 at Wellesley College, Hillary Clinton’s alma mater. I’d been dispatched there to gather string for a story marking the historic election of the nation’s first female president.

I spent the day interviewing students as they cast their ballots, considering it a small coup when I found one who had lived in Hillary’s old freshman dorm. In the gift shop, an army of Hillary Clinton action figures in plastic turquoise pantsuits stood at attention by the cash register. A coffee mug read madam president. deal with it.

Over the phone, I interviewed a ninety-­four-­year-­old Wisconsin woman who’d cast a ballot for Hillary from her hospital bed. I traded emails with a descendant of Elizabeth Cady Stanton. I texted a colleague who’d been dispatched to the Illinois town where Hillary Clinton had grown up. Other colleagues camped out at the Javits Center in New York, waiting for Hillary to give her victory speech.

I considered heading home to my six-­month-­old daughter. But a group of Wellesley alumnae persuaded me to pop into the victory party. None of them had canvassed or phone-­banked for Hillary, but they’d all voted for her. And they’d bought their plane tickets six months earlier, along with thousands of other alumnae who had trekked back to campus to mark the happy occasion. We headed across the grassy lawn, strewn with the bright leaves of November, to the field house, where circular tables draped with white tablecloths offered up ham-­and-­cheese spirals with “goddess dressing.” A woman with a nose ring wore a T-­shirt that read lord, give me the confidence of a mediocre white man. In the bleachers, another woman adjusted the strap of her homemade headpiece, which looked like a glass ceiling being smashed by a hammer.

On the volleyball court, a male computer science professor gave a lecture on the historical significance of this night. “Just one hundred years ago, women were picketing for the right to vote,” he said. “Now students aren’t going to aspire to be the first female president but rather the next female president.”

From my seat in the bleachers, I spotted a square-­jawed woman in a straw hat glancing at her smartphone. Her jaw dropped. That was the first clue.

The professor scurried from the podium. The screen behind him turned back to CNN, which reported that Donald Trump was leading in Michigan, North Carolina, and Wisconsin.

Anxiety gripped the room. Then a cheer rose up. Had they called Ohio?

No. It was Secretary of State Madeleine Albright—­another famous Wellesley grad—­looming on a screen like a general in a sci-­fi film.

“I think we’re going to pull this one off,” she told the crowd. “Nothing comes easy for women.”

A short while later, the crowd let out a collective boo. Trump had won Ohio.

A moment later, a chant began: “1.9.6.9. Wellesley,” like a spell to ward off the inexplicable middle swath of the country.

“Who’s going to break the glass ceiling? Hillary! Who’s our next commander in chief? Hillary!”

Then the news broke that Trump had carried Florida.

The voices of CNN reverberated from too many television screens, monstrous, distorted, unintelligible. Everything liberal America had told itself about itself and the rest of the country seemed inside out and upside down.

A woman breastfeeding near me looked shaken, as if she’d just witnessed a crime.

A staff member from the college dragged the life-­sized cardboard likenesses of Donald Trump and Mike Pence to the safety of the pressroom. “They’re beginning to attack the cutouts,” she explained.

Out in the large hall, two prospective students in the bleachers—­a dark-­skinned girl in a hijab and an olive-­skinned girl in a stop harassing muslims sweatshirt—­clutched each other in fear. “I think Trump is going to put us in a concentration camp,” one said.

At 1:10 a.m. it dawned on the crowd that the good people of Michigan weren’t going to save the Democratic Party; that there is no inevitable arc of history bending toward justice; that the North could have lost the Civil War. That Adolf Hitler could have prevailed. That our very existence—­dating back to our evolution from slime—­could be nothing more than an unlikely series of highly improbable lucky breaks.

Overheard on the gradually emptying floor: “F*** you, middle part of the country.” In the all-­gender restroom: “She’s in the bleachers. I don’t know how to get her to stop crying.” The women of Wellesley staggered out of the field house like survivors from a bomb shelter, into a changed world. How could this have happened? The answer literally littered the ground: blue triangle flags scattered everywhere read make the impossible possible. Yet Hillary Clinton’s presidency had never felt impossible. It had felt inevitable. The candidate who’d made the impossible possible was actually Donald Trump, who had never served a single day in government at any level, not even on a school committee.

After the election, the residents of the city where I lived, Cambridge, Massachusetts, spent months in shock, grief, fear, and anger.

The election felt all the more surreal to me since five years earlier, in 2011, I’d attended the White House Correspondents’ Association annual dinner and watched President Barack Obama roast Donald Trump, an irrelevant figure in Washington at the time. Although Trump had floated the idea of running for president since the 1980s, he had been best known for a reality television show called The Apprentice and for promoting the false right-­wing conspiracy theory that Obama had been born in Kenya. The subtext of Trump’s accusation was clear: Obama wasn’t supposed to be president. He wasn’t really one of us.

At the dinner, Obama stepped up to the podium in his tuxedo and flashed his million-­dollar smile. “My fellow Americans,” he said, in a pretend-­somber tone. “. . . the state of Hawaii released my official long-­form birth certificate. Hopefully this puts all doubts to rest. But just in case there are any lingering questions, tonight I am prepared to go a step further. Tonight, for the first time, I am releasing my official birth video.”

Then he played a clip from The Lion King, with the newborn cub held up to the sky. I laughed. We all laughed. The entire room of journalists and diplomats and government officials in tuxedos and ball gowns laughed at Donald Trump, who smirked at the cameras from a table in the middle of the room. By the time the comedian Seth Meyers got up and continued roasting Trump from the stage, the reality television star was stone-­faced and smoldering.

We learned later that Obama went back to the White House that night and waited for news that Osama bin Laden, the most wanted terrorist in U.S. history, had finally been killed in a raid he’d ordered.

And Donald Trump went away that night, I’m convinced, and plotted his revenge.

The morning after Trump’s election, churches put up posters in my neighborhood asking people to pray for the country.

“I can’t believe there is no law to stop this!”

On election day 2016 in Indiana, a thousand miles away, Shannon Mulcahy dragged herself out of bed in her little ranch house in the cornfields north of Indianapolis. She had hair the color of a bale of hay, a round Irish nose, and a chin that jutted out stubbornly whenever she got angry, as if daring the world to punch it. She was forty-­two years old and already a grandmother, a responsibility she took seriously.

Election day for Shannon was no different from any other day. She followed her usual routine: letting the pit bulls out into the pen; bellowing at her boyfriend, who tinkered with dead cars in the yard; soothing her four-­year-­old grandbaby, who slept in Shannon’s cluttered living room, surrounded by medical machines to help her breathe.

I can imagine Shannon cooing to the little girl as she emptied a bottle of PediaSure Peptide into the girl’s feeding tube, “Maw-­maw will take care of it.”

Born with a rare genetic disorder, Carmella couldn’t talk or walk. She had a hole in her neck with a tracheotomy tube that doctors had made to help her breathe after a near-­death experience in the hospital earlier that year. During that hospital stay, Carmella had also lost most of her fingers. Shannon showered the sickly child with gifts: DVDs, stuffed animals, a toy drum set. When Shannon came home from the factory late at night, Carmella flapped her arms with joy. When Shannon left for the factory each afternoon, the little girl whimpered and moaned.

Shannon had worked at the factory for seventeen years. Everything she had—­her house, her car, her self-­esteem, and maybe even her life—­she had because of that job. Her very body had been shaped by it: her fingernails had been blackened by the carbon the furnaces belched; her shoulders had bulked up from muscling seventy-­five pounds of steel up a narrow set of stairs. She even smelled like the factory long after she showered, as if the quench oil from the furnaces had seeped into her skin.

Farah Stockman joined the New York Times editorial board in 2020 after covering politics, social movements, and race for the national desk. She previously spent sixteen years at the Boston Globe, nearly half of that time as the paper’s foreign policy reporter in Washington, D.C. She has reported from Afghanistan, Pakistan, Iran, South Sudan, Rwanda, and Guantánamo Bay. She also served as a columnist and an editorial board member at the Globe. In 2016, she won the Pulitzer Prize for a series of columns about the efforts to desegregate Boston’s schools. She lives in Cambridge, Massachusetts, but also spends time in Michigan. 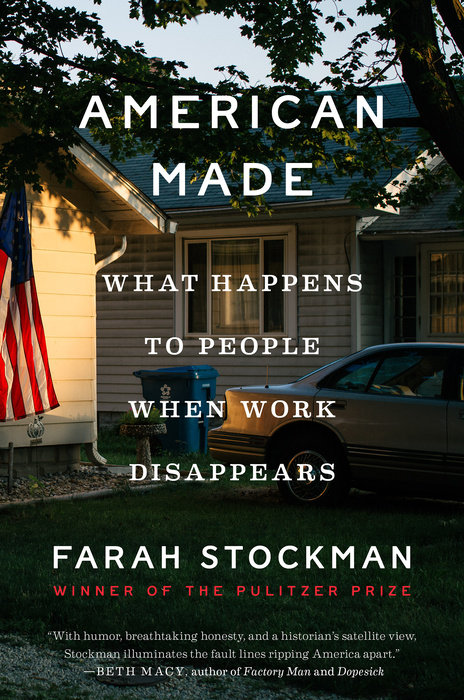