80 Recipes and Stories from My Shared Cultures: A Cookbook

In A Common Table, Two Red Bowls blogger Cynthia Chen McTernan shares more than 80 Asian-inspired, modern recipes that marry food from her Chinese roots, Southern upbringing, and Korean mother-in-law’s table. The book chronicles Cynthia’s story alongside the recipes she and her family eat every day—beginning when she met her husband at law school and ate out of two battered red bowls, through the first years of her legal career in New York, to when she moved to Los Angeles to start a family.

As Cynthia’s life has changed, her cooking has become more diverse. She shares recipes that celebrate both the commonalities and the diversity of cultures: her mother-in-law’s spicy Korean-inspired take on Hawaiian poke, a sticky sesame peanut pie that combines Chinese peanut sesame brittle with the decadence of a Southern pecan pie, and a grilled cheese topped with a crisp fried egg and fiery kimchi. And of course, she shares the basics: how to make soft, pillowy steamed buns, savory pork dumplings, and a simple fried rice that can form the base of any meal. Asian food may have a reputation for having long ingredient lists and complicated instructions, but Cynthia makes it relatable, avoiding hard-to-find ingredients or equipment, and breaking down how to bring Asian flavors home into your own kitchen.

Above all, Cynthia believes that food can bring us together around the same table, no matter where we are from. The message at the heart of A Common Table is that the food we make and eat is rarely the product of one culture or moment, but is richly interwoven—and though some dishes might seem new or different, they are often more alike than they appear.

An excerpt from A Common Table


Around the time that I first began thinking about this book, my husband, Andrew, and I were in the middle of a cross-country move from Brooklyn, New York, to Los Angeles, California. We were junior attorneys partway through our third years at law firms in Manhattan, expecting our first baby, and, with our little guy on the way, trying to figure out where it was that we wanted him to arrive.

I grew up in Greenville, South Carolina, a city big enough for an airport but small enough that the airport only had two terminals, friendly and slow-moving and comfortable. After going to college three hours away in North Carolina, I trekked north to snowy Cambridge, Massachusetts, for law school, which led to my first gainful employment as an attorney in New York. In the five-and-a-half frigid winters since I’d left the Carolinas, my family had moved to Southern California; my husband’s family, by turn, had always been in Hawaii. Neither of them were very close to New York. Even though we’d never spent more than a week in California, we decided to move to Los Angeles for family—because we wanted to live closer to our siblings and parents, and because we hoped sunny LA would be where the story of our own family began. (Of course, the warm weather didn’t hurt.)

So, when I was about four months pregnant, an apartment in a little duplex on the west side of LA became our home. It was bright and airy and filled to the brim with California sunshine. We started that thing called “nesting,” fawning over (and then cursing while assembling) cribs and baby swings. With five months to go until our son arrived, we talked endlessly about what life would be like with him. What did we want to pass down to him? What would being a family mean for us, and for him? And—because for me, it always comes back to food—what would he eat?

A few months later Luke arrived, and with him the answers to our questions. Family meant hazy early mornings, bleary-eyed midnight diaper changes, and sunny Saturday afternoons crawling around on all fours. It meant visits from his Chinese grandparents on my side of the family, with stuffed monkeys for his Chinese zodiac year in tow, and, on my husband’s side, weekly Skype sessions with Luke’s Irish grandpa and his Korean halmuni in Honolulu, who dove into planning Luke’s first birthday party, his dol, with gusto. Our baby’s first purées were jook (or congee, page 24, depending on who you ask!), the purple sweet potato familiar to my Hawaii-born husband, the bright orange yam familiar to me; his first finger foods were my mother’s soy-glazed salmon (page 118) and little bites of pork and vegetable dumplings (page 157).

Over the course of his first year, I came to realize that, in many ways, Luke embodied the spirit of the book I wanted to write. He is, after all, a combination of “shared cultures.” His mom is a Chinese girl who grew up in South Carolina, eating mapo tofu alongside cornbread (page 213) and washing it down with sweet tea. His dad is a Korean-Irish boy who grew up halfway around the world in Hawaii, toting Spam musubi (page 87) to school and coming home to kimchi fried rice (page 113). In my little guy, I see a mix of cultures that is both incredibly diverse and utterly American. And those cultures, the food he eats, the traditions we’re building together with him, all have so much more in common than first meets the eye.

As I wrote this book over the course of Luke’s first year, A Common Table became a chronicle of all of these things. These recipes are a journal of the food that I make for our little family, reflecting the myriad cultures and influences that make us who we are. There are Chinese dishes that my mother taught me when I first moved away from home and, missing her cooking terribly, emailed and called her incessantly to learn how to make her spicy braised lamb (page 164) and Ginger Shrimp & Green Peas (page 191), thousands of miles away from home. Alongside those are recipes from the American South, pimento cheese (page 207) and flaky biscuits (page 52), food that makes me nostalgic for my childhood and the baking-hot summers of South Carolina, and the Sweet Tea (page 258) that accompanied every meal growing up.

And then there are the Korean dishes that my husband introduced to me when we began dating as law students in Boston, and that I later learned to cook from my mother-in-law, peering over her shoulder in her apartment in downtown Honolulu. You can also find a few homemade takes on the Hawaii staples that my husband misses most when he’s on the mainland, cobbled together from my trials and his taste-tests until they reminded him most of home.

Importantly, putting all these recipes in one place revealed that they had far more in common than I’d realized—for instance, that the dumplings in kimchi sujebi (page 82) are the same as the flat dumplings in familiar Southern chicken and dumplings (see page 79), and even the same as the wrappers for the Potstickers (page 157) that I ate when I was a child, or that char siu pork (page 76), traditionally roasted on hooks, can be made just as easily in the oven as baby-back ribs can, even though they are traditionally smoked.

Finally, sprinkled between these are recipes that don’t fit neatly within any of these categories. There are recipes for foods we’ve loved in places we’ve traveled and that I’ve sought to re-create at home. Matcha-Glazed Swirl Bread (page 232) that we had in a basement food hall in Japan on our honeymoon, for instance, or soft, savory ham and egg buns (page 35) that I loved while studying abroad in Hong Kong. There are playful explorations of all of the above, dishes that are a little bit unconventional but still so familiar, like Milk Tea Rice Pudding (page 248) or Sweet Sesame Skillet Cornbread (page 213). If the traditional dishes in this book represent where we come from—my family, my husband’s family, and the traditions that were passed down to us—I like to think of these “new” dishes as the quirky emblem of where we are going.

Ultimately, I wrote A Common Table because I know food can bridge all kinds of distances, geographical or cultural, to bring us all around the same table. It represents the traditions and loved ones from our past and present, and it can represent things that are totally new to us, too. Food is what connects us, a common denominator that sustains all of us, both physically andemotionally—and I hope this book will serve to make that only more true.

Cynthia Chen McTernan is a lawyer and the self-taught home cook and photographer behind Two Red Bowls, winner of the 2015 Saveur Blog Award for Most Delicious Food. She has been featured in Food & Wine, Saveur, Better Homes and Gardens, Good Housekeeping, and Huffington Post, and has collaborated with West Elm, Crate & Barrel, King Arthur Flour, Food52, Urban Outfitters, and more. Cynthia graduated from Harvard Law School in 2013 and spent three years at a law firm in Manhattan before moving to Los Angeles, California, where she continues to practice law—when not cooking—and where she lives with her husband, the patient taste-tester and the original owner of the two red bowls, and their baby, Luke.

80 Recipes and Stories from My Shared Cultures: A Cookbook 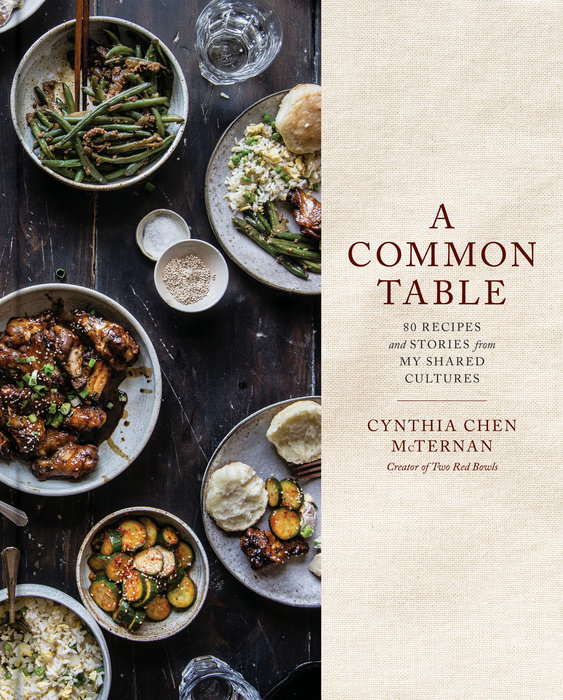