You never know just what will change your life.

Massimo Vacchetta, an Italian veterinarian, provides expert care for large animals—cows, horses, sheep. One day, a friend asks him to help care for something much smaller: an orphaned baby hedgehog. Only a few days old and so very alone, Massimo is struck by her helplessness and connects with her in a way he’s never connected with any other animal. He names her Ninna.

Soon, another sick hedgehog lands in his lap. And then another. As Massimo finds these hedgehogs who need his help, he finds himself—and the true meaning of compassion.

While his other prickly patients are healed and released, Massimo continues to dote on Ninna like a child, constantly fretting about her health and happiness, not ready to say goodbye. But the cage that once kept her safe soon becomes a prison, and as much as it breaks Massimo's heart to let her go, he knows she longs to be free.

Through this life-affirming story of a man and his hedgehog, we learn that there’s no such thing as too small an act, if it’s done out of great compassion and love.

An excerpt from A Handful of Happiness

The pages ahead tell a story that’s true to its core: the story of Massimo Vacchetta and his hedgehogs. I met Massimo by chance—though who knows, maybe nothing happens purely by chance—and immediately wanted to write about him. About his hedgehog world and La Ninna Hedgehog Rescue Center. I wrote a two-page feature for a weekly magazine I contribute to called Confidenze tra amiche. The response was enthusiastic.

Then came a request from publisher Sperling & Kupfer: “Can we make this into a book?” And here it is. Massimo told me everything over hours, days, weeks, and months on the telephone. As he talked, he looked after his hedgehogs—our phone conversations did not distract him from their care for a single minute. I, on the other hand, just listened attentively, so as not to miss anything. Even to the words he did not say. And especially his feelings, in all their light and shadow, so as to convey them to you, the reader. Trying not to use a filter of my own. I tried my best, but sometimes the heart, in secret, slips in, and you don’t even notice.

Like him, I have loved animals since I was little. My husband and my son have, too. We have four dogs: Luna, Mare, Blu, and Mostrilla. And a ginger cat who comes to visit us every day. Charmed, we always welcome him with open arms. His name is Pimky. We also have fifteen goldfish in a pond we built ourselves. Some frogs have made homes there, and their croaking fills the air every summer.

We’ve never seen hedgehogs in our garden, but we’re sure they come out and scamper around at night.

But back to Massimo. If every person on this earth is unique, Massimo is a little bit more so. Between one story and the next, I found myself thinking he would never grow old. He has the soul of a poet and the eyes of a child. That’s why he sees beauty even where others do not. That’s the way he is, as you are about to read. Sentimental and a dreamer. With his mistakes and faults, which he doesn’t hide. With his regrets. With his sorrows. With his joys. With his insecurities and his convictions. And with his desires to do and to give, which are irrepressible. At least as long as there are hedgehogs forgotten by the world that need him. At least as long as he lives.

Chapter 1
May 2013. Spring was in full swing, yet it was passing me by. Its sights and scents seemed faded and far away. I was lost.

An urgent need for change was burning inside me. My desire to pursue a new dream hadn’t waned. Despite everything. Despite the wounds I’d borne and battles I’d lost.

I brushed my hair off my forehead, as if to push away those intense thoughts, and opened my closet. Matching colors with meticulous care, I picked out a pair of pants, a light turtleneck, a blazer, shoes, socks. I added a nice watch. Dressed to the nines, I looked in the mirror. Everything was right, down to the last detail. I went into the living room. Greta was there, curled up on the sofa. She looked up from her tablet.

“You look nice,” she said, pleased.

As she looked at me, her bright expression faded. “But your eyes always have a little sadness. Even when you smile,” she added, almost whispering.

I let out a little sigh in response.

“I’ll be back soon,” I said and, grabbing the car keys, went out. I drove slowly through traffic, while sensations and reflections alternated and intermingled in my mind. I was dissatisfied with my work and with my life. I felt like I was groping my way through a dark, empty room, with nothing to orient me. I needed something I could get excited about. Something that would give me the desire to live that I was hungry for. Greta pushed me, thinking she was being helpful. But I didn’t want to go in the direction she suggested. It was hers, not mine.

I decided to become a veterinarian as soon as I graduated high school. To everyone around me, even me, it seemed like a random choice. But it wasn’t. I only realized later that it had deep roots in my childhood. Maybe I was simply born with a desire to help animals. Who knows.

All the same, after years of doing that job, there I was, feeling like something wasn’t right anymore. Something was missing. A great absence whose weight I could feel without knowing its name.

Greta had insisted pragmatically: “Try doing something different. For example, you could start working with small animals. Dogs, cats. All pets. You’d earn a lot more, you know. And you need to think about retirement. An extra pension. Or life insurance.” It was like talking to my father: Do this, do that. But that’s not how I was or am. I’m the opposite of someone who plans out his life. It wasn’t my style. I couldn’t see myself closed inside a clinic going back and forth between vaccinations and microchips. I was used to different situations, more extreme ones.

Following her advice, I’d started working at two small animal clinics. Just a couple of times a week. I was on my way to one that day—I had to take over for Andrea, the owner, for the weekend. When I got there, after saying hello, he launched into all the instructions. He explained everything there was to do as we exchanged banter about ourselves and work. Before we parted ways, he showed me a box. Inside was a little animal. It was tiny.

I looked at the little creature, curious.

“A woman found it in her garden. It’s an orphan,” Andrea continued. “She brought it here because she didn’t know what to do with it.”

The little thing still had its eyes closed. And pink, hairless skin. The spines were white and soft, a bit disheveled. They started just behind his tiny ears and ran all the way down his back.

“It was born two or three days ago. It weighs less than an ounce—only twenty-five grams,” Andrea said.

“Twenty-five grams is nothing,” I remarked. “Yeah. You’ll have to feed it several times.”

“Which milk is the best substitute for its mother’s?”

“I was recommended goat’s milk. Cow’s milk doesn’t work because it has a very high level of lactose, a sugar that hedgehogs don’t tolerate well. You’ll have to feed it by syringe, one drop at a time.”

I took the hedgehog and set it on the palm of my hand, to observe it more closely. I paused to look at its front paws: Its slender toes made them look like little hands. I was struck by that similarity. But, pushing away the sentimentality that was starting to wash over me, I suggested to Andrea, smiling, “Let’s take some pictures of him and put them on Facebook.”

The next morning, I got ready with my usual care. I put on a pair of jeans and a blue linen button-down. I went through my jackets and chose one that was casual yet impeccably cut. Light tan color. Paired it with loafers. I checked myself thoroughly in the mirror. My physical appearance was important to me. I was aware of having a certain appeal, and I cultivated it.

As arranged, I went to Andrea’s clinic. I wanted to see to the hedgehog again. That odd little creature had gotten to me the day before. I opened the door and stood there, frozen. It was whimpering. A soft, small whimper. Like a chick. A baby bird. A constant, tiny wail broken up by brief pauses. It went straight to the heart. It stung. It hurt. A tear-shaped sound, faint yet shrill.

The little hedgehog was crying for help.

I approached the box filled with wood shavings where it was contained. I took the critter out and set it on the nearby table.

The hedgehog was cold. It was the chill of life slipping away, moving aside for death. I felt infinite sorrow for that little animal. I was assailed by feelings that were familiar to me yet new, as if they’d been roused from a slumber that had kept them hidden or trapped for ages. I was accustomed to animals in pain. I had built a shield around myself that allowed me a certain detachment. That shield shattered at the sight of that creature.

I looked at the urchin with new eyes. I saw how it was an orphan. I imagined its mother getting hit by a car while searching for food. Maybe flattened on the asphalt. Or left incapable of returning to her den in another horrible way. I imagined the baby, waiting in vain. And its fear. Probably, desperate, it had emerged from its nest to search for its mother. And in an instant, like a thunderbolt, I felt its solitude. Complete. Boundless. I recognized it. It was like mine, mine as a child. 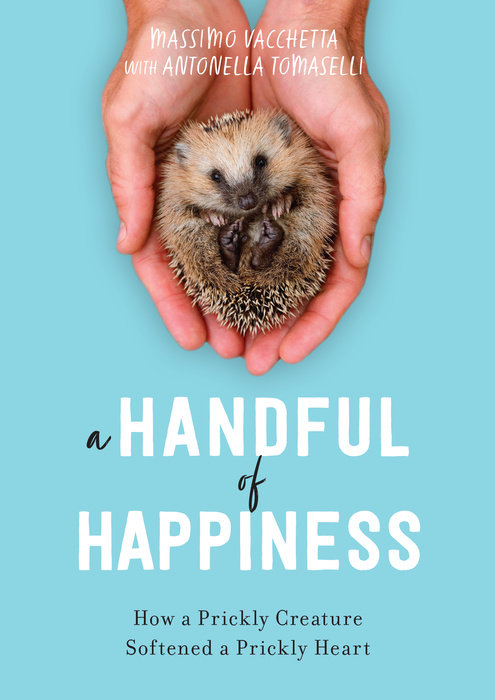