“A compulsive page-turner with shades of Donna Tartt’s The Secret History peopled by a new generation.”—Catherine Steadman, New York Times bestselling author of Something in the Water

In her first weeks at Hawthorne College, Malin is swept up into a tight-knit circle that will stick together through all four years. There’s Gemma, an insecure theater major from London; John, a tall, handsome, wealthy New Englander; Max, John’s cousin, a shy pre-med major; Khaled, a wisecracking prince from Abu Dhabi; and Ruby, a beautiful art history major. But Malin isn’t like the rest of her friends. She’s an expert at hiding her troubled past. She acts as if she shares the preoccupations of those around her—dating, partying—all while using her extraordinary insight to detect their deepest vulnerabilities and weaknesses.

By Senior Day, on the cusp of graduation, Malin’s secrets—and those of her friends—are revealed. While she scrambles to maintain her artfully curated image, her missteps set in motion a devastating chain of events that ends in a murder. And as fragile relationships hang in the balance and close alliances shift, Malin must test the limits of what she’s capable of to stop the truth from coming out.

In a mesmerizing novel that peels back the innumerable layers of a seductive protagonist, debut author Cambria Brockman brings to life an entrancing story of friendship, heartbreak, and betrayal.

Praise for Tell Me Everything

“Gripping . . . Brockman paints an unnerving portrait of the power people hold over one another—especially as they blur the line between protective and obsessive.”—Time

“At once a complex thriller and antihero origin story, Cambria Brockman’s riveting debut is a true page-turner.”—Lisa Lutz, New York Times bestselling author of the Spellman series and The Passenger

“Cambria Brockman’s dark and twisty Tell Me Everything is an impressive debut, a complicated and compelling novel of psychological suspense that deftly explores the questions of how well we know our friends and of whom we can trust.”—Karen Dionne, author of the international bestseller The Marsh King’s Daughter

An excerpt from Tell Me Everything

Those first weeks at Hawthorne appear in my mind as books might sit on a shelf, neat and ordered, separated by genre. I wonder if the others remember it as I do. Bits and pieces of memories, scattered moments, things we said, things we did. The reasons we became so close; it came down to those first few days, insecurities and nerves unifying us as one.

After my parents hauled my belongings into my bare room and escorted me to the dining hall, I was alone. I knew nobody, and I lived in a single in a dorm. It reminded me of the first day of kindergarten. My mother had dropped me off, her scent still lingering in the air after she left. She wore a perfume that defined parts of my childhood, every memory laced with that fragrance. I sat at one of the miniature communal tables, quiet and calm, while my peers panicked, cried and screamed, threw tantrums. College was similar, minus the show. Everyone older now, capable of hiding their fear—­but the pits of their stomachs gnawed at them, and I saw the same panic in their eyes. They wondered if they would make friends, if they would find a place to belong for the next four years of life.

I looked up at the shiny new dining hall, construction having barely finished over the summer, its glass walls reflecting warm light in my eyes. Posters taped to the outside promoting campus clubs and athletic events. I thought about my parents, who would be crossing the Maine–­New Hampshire border, driving the speed limit down Interstate 95 toward the airport in Boston. My mother was probably staring out the window as my father drove, watching the trees pass by, wondering when they would begin to turn.

I met John first, before anyone else came into my life at Hawthorne. Everyone pegged me as Ruby’s best friend, her sidekick from day one. I didn’t argue otherwise. Besides, people were drawn to Ruby, her bouncy ponytail of chestnut hair and enduring smile attracting the attention, not me. Everyone wanted to be close to that kind of perfection. People assumed she plucked me from the crowd of girls willing to be her friend when, in actuality, I chose her.

The dining hall was packed with new students, and a few jostled by as they made their way to empty seats. I stood still, eyeing my options. Students were introducing themselves, talking about their summers. I didn’t have to choose a seat quite yet. The talk would start in ten minutes. I could grab a coffee from the cart outside. I turned on my heels and left, relieved for open space and fresh air.

“Iced coffee,” I said to the barista behind the cart. She looked older, maybe this was her campus job. A junior perhaps. “Black, please.”

“Same,” said a voice from behind me. I glanced over my shoulder, looking up to see the face that belonged to the voice. It was rare for me to feel short.

Clear blue eyes stared down at me. He smiled, one of those half-­smiles, charming and quirky, and had a handsome face, with thick blond hair sticking out from underneath his hat. I looked back at the barista, perhaps a little too fast. She stared at him, too, until he cleared his throat and she handed us both the coffees.

“It’s on me,” he said. Before I could protest, he had already handed over four dollars.

“Oh, um,” I mumbled. “Thanks. That was really not necessary.”

I looked at him, confused. His mouth curved into a sly smile.

“The sticker,” he said, pointing at something on my book bag. “Texans?” He pointed to his brimmed hat. “Giants guy.”

I looked down at my bag. My dad had smacked the sticker on my bag after the Texans won two games in a row last winter. It was a big deal because they usually lost, by a lot. My dad was so excited, his face like a little kid’s. I hadn’t seen him like that since I was young, so I didn’t take the sticker off, in fear of his face falling back into that grief.

“Hey, you never know, with some good draft picks,” he replied with a wink.

He spoke in that relaxed, teenage-­guy kind of way. Dopey and sweet. I smiled a little, hoping to seem grateful and pleasant. But ­really, I was annoyed. I hated being indebted to people. Especially guys like this, who I knew would give me some pet name and high-­five me whenever he saw me, or hold out his fist for a bump, leaving me guessing which one he would choose. I’d rather buy my own coffee.

He held the door to the dining hall open for me, and I slipped inside, eager to get away so we didn’t have to talk.

“John,” someone called from the path outside, and John the Giants fan released the door and let it close between us, already giving the other guy a loose handshake and slap on the back. They looked like athletes, the way their bodies moved with grace and precision, despite the slight air of nonchalance they both carried in their shoulders. Tan lines on their shins. Soccer, I guessed.

I got in line for my orientation packet and watched them through the glass. I wondered if they had just met, or if there was a preseason, or if they knew each other from home. It was curious watching people interact, watching them decide what to say, how to act. Their first impression the most important. I noted their body language, the attempts to look carefree. I tried to relax my shoulders, but they were stuck in permanent intensity.

John and I locked eyes, his mouth curling into that suggestive smile I would see a thousand times. He gave me a wink, and I turned fast, pretending not to see. I preferred to go unnoticed, but I had inherited my mother’s porcelain fair skin and green eyes. My facial features were symmetrical and soft, and no matter how much I ate, my body remained thin. The Texan sun spun my hair gold, despite my urge to be plain and anonymous.

I turned my head away, but I could still feel his eyes on me, taking me in. His laughter rumbled as the glass doors opened and closed for other students.

There was a familiarity about him—­in the way he smiled, how he wanted to do something nice for me, the coloring of his skin and hair. I swallowed and forced the memory to pass.

Cambria Brockman grew up in Houston, London, and Scotland and attended Holderness School in New Hampshire. She graduated from Bates College in Lewiston, Maine, with a degree in English literature. She owns an award-winning wedding and portrait photography company, Cambria Grace, along with its popular Instagram account. Brockman lives in Boston with her husband, son, and dog. Tell Me Everything is her first novel. 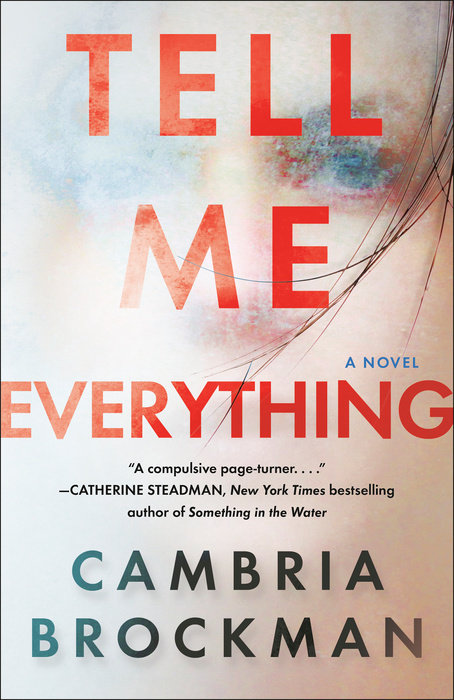