Not even the icy temperatures of a typical New England winter can match the bone-chilling scene of carnage discovered at the chapel of Our Lady of Divine Light. Within the cloistered convent lie two nuns–one dead, one critically injured–victims of an unspeakably savage attacker. The brutal crime appears to be without motive, but medical examiner Maura Isles’s autopsy of the dead woman yields a shocking surprise: Twenty-year-old Sister Camille gave birth before she was murdered. Then another body is found, mutilated beyond recognition. Together, Isles and homicide detective Jane Rizzoli uncover an ancient horror that connects these terrible slaughters. As long-buried secrets come to light, Maura Isles finds herself drawn inexorably toward the heart of an investigation that strikes close to home–and toward a dawning revelation about the killer’s identity too shattering to consider.

An excerpt from The Sinner: A Rizzoli & Isles Novel

They called her the Queen of the Dead.

Though no one ever said it to her face, Dr. Maura Isles sometimes heard the nickname murmured in her wake as she traveled the grim triangle of her job between courtroom and death scene and morgue. Sometimes she would detect a note of dark sarcasm: Ha ha, there she goes, our Goth goddess, out to collect fresh subjects. Sometimes the whispers held a tremolo of disquiet, like the murmurs of the pious as an unholy stranger passes among them. It was the disquiet of those who could not understand why she chose to walk in Death’s footsteps. Does she enjoy it, they wonder? Does the touch of cold flesh, the stench of decay, hold such allure for her that she has turned her back on the living? They think this cannot be normal, and they cast uneasy glances her way, noting details that only reinforce their beliefs that she is an odd duck. The ivory skin, the black hair with its blunt Cleopatra cut. The red slash of lipstick. Who else wears lipstick to a death scene? Most of all, it’s her calmness that disturbs them, her coolly regal gaze as she surveys the horrors that they themselves can barely stomach. Unlike them, she does not avert her gaze. Instead she bends close and stares, touches. She sniffs.

And later, under bright lights in her autopsy lab, she cuts.

She was cutting now, her scalpel slicing through chilled skin, through subcutaneous fat that gleamed a greasy yellow. A man who liked his hamburgers and fries, she thought as she used pruning shears to cut through the ribs and lifted the triangular shield of breastbone the way one opens a cupboard door, to reveal its treasured contents.

The heart lay cradled in its spongey bed of lungs. For fifty-nine years, it had pumped blood through the body of Mr. Samuel Knight. It had grown with him, aged with him, transforming, as he had, from the lean muscle of youth to this well-larded flesh. All pumps eventually fail, and so had Mr. Knight’s as he’d sat in his Boston hotel room with the TV turned on and a glass of whiskey from the minibar sitting beside him on the nightstand.

She did not pause to wonder what his final thoughts might have been, or whether he had felt pain or fear. Though she explored his most intimate recesses, though she flayed open his skin and held his heart in her hands, Mr. Samuel Knight remained a stranger to her, a silent and undemanding one, willingly offering up his secrets. The dead are patient. They do not complain, nor threaten, nor cajole.

The dead do not hurt you; only the living do.

She worked with serene efficiency, resecting the thoracic viscera, laying the freed heart on the cutting board. Outside, the first snow of December swirled, white flakes whispering against windows and slithering down alleys. But here in the lab, the only sounds were of running water and the hiss of the ventilator fan. Her assistant Yoshima moved in uncanny silence, anticipating her requests, materializing wherever she needed him. They had worked together only a year and a half, yet already they functioned like a single organism, linked by the telepathy of two logical minds. She did not need to ask him to redirect the lamp; it was already done, the light shining down on the dripping heart, a pair of scissors held out and waiting for her to take them.

The darkly mottled wall of the right ventricle, and the white apical scar, told her this heart’s sad story. An old myocardial infarction, months or even years old, had already destroyed part of the left ventricular wall. Then, sometime in the last twenty-four hours, a fresh infarction had occurred. A thrombus had blocked off the right coronary artery, strangling the flow of blood to the muscle of the right ventricle.

She resected tissue for histology, already knowing what she would see under the microscope. Coagulation and necrosis. The invasion of white cells, moving in like a defending army. Perhaps Mr. Samuel Knight thought the discomfort in his chest was just a bout of indigestion. Too much lunch, shouldn’ t have eaten all those onions. Maybe Pepto-Bismol would do the trick. Or perhaps there’d been more ominous signs which he chose to ignore: the weight on his chest, the shortness of breath. Surely it did not occur to him that he was having a heart attack.

That, a day later, he would be dead of an arrhythmia.

The heart now lay open and sectioned on the board. She looked at the torso, missing all its organs. So ends your business trip to Boston, she thought. No surprises here. No foul play, except for the abuse you heaped on your own body, Mr. Knight.

The intercom buzzed. “Dr. Isles?” It was Louise, her secretary.

“Detective Rizzoli’s on line two for you. Can you take the call?”

Maura peeled off her gloves and crossed to the wall phone. Yoshima, who’d been rinsing instruments in the sink, shut off the faucet. He turned to watch her with his silent tiger eyes, already knowing what a call from Rizzoli signified.

When at last Maura hung up, she saw the question in his gaze.

“It’s starting early today,” she said. Then she stripped off her gown and left the morgue, to usher another subject into her realm.

The morning’s snowfall had turned into a treacherous mix of both snow and sleet, and the city plows were nowhere in sight. She drove cautiously along Jamaica Riverway, tires swishing through deep slush, windshield wipers scraping at hoar-frosted glass. This was the first winter storm of the season, and drivers had yet to adjust to the conditions. Already, several casualties had slid off the road, and she passed a parked police cruiser, its lights flashing, the patrolman standing beside a tow truck driver as they both gazed at a car that had tipped into a ditch.

The tires of her Lexus began to slide sideways, the front bumper veering toward oncoming traffic. Panicking, she hit the brakes and felt the vehicle’s automatic skid control kick into action. She pulled the car back into her lane. Screw this, she thought, her heart thudding. I’ m moving back to California. She slowed to a timid crawl, not caring who honked at her or how much traffic she held up. Go ahead and pass me, idiots. I’ve met too many drivers like you on my slab.

The road took her into Jamaica Plain, a west Boston neighborhood of stately old mansions and broad lawns, of serene parks and river walks. In the summertime, this would be a leafy retreat from the noise and heat of urban Boston, but today, under bleak skies, with winds sweeping across barren lawns, it was a desolate neighborhood.

The address she sought seemed the most forbidding of all, the building set back behind a high stone wall over which a smothering tangle of ivy had scrambled. A barricade to keep out the world, she thought. From the street, all she could see were the gothic peaks of a slate roof and one towering gable window which peered back at her like a dark eye. A patrol car parked near the front gate confirmed that she had found the correct address. Only a few other vehicles had arrived so far—the shock troops before the larger army of crime-scene techs arrived.

She parked across the street and braced herself against the first blast of wind. When she stepped out of the car, her shoe skidded right out from under her, and she barely caught herself, hanging onto the vehicle door. Dragging herself back to her feet, she felt icy water trickle down her calves from the soaked hem of her coat, which had fallen into the slush. For a few seconds she just stood there, sleet stinging her face, shocked by how quickly it had all happened.

She glanced across the street at the patrolman sitting in his cruiser, and saw that he was watching her, and had surely seen her slip. Her pride stung, she grabbed her kit from the front seat, swung the door shut, and made her way, with as much dignity as she could muster, across the rime-slicked road.

“You okay, Doc?” the patrolman called out through his car window, a concerned inquiry she really did not welcome.

“Watch yourself in those shoes. It’s even more slippery in the courtyard.”

“They’re in the chapel.”

She continued to the front gate, but found it locked. An iron bell hung on the wall; she tugged on the pull rope, and the medieval clang slowly faded into the softer tick, tick of falling sleet. Just beneath the bell was a bronze plaque, its inscription partially obscured by a strand of brown ivy.

Graystones Abbey The Sisters of Our Lady of Divine Light

“The harvest is indeed great, but the laborers are few.

On the other side of the gate, a woman swathed in black suddenly appeared, her approach so silent that Maura gave a start when she saw the face staring at her through the bars. It was an ancient face, so deeply lined it seemed to be collapsing in on itself, but the eyes were bright and sharp as a bird’s. The nun did not speak, posing her question with only her gaze. 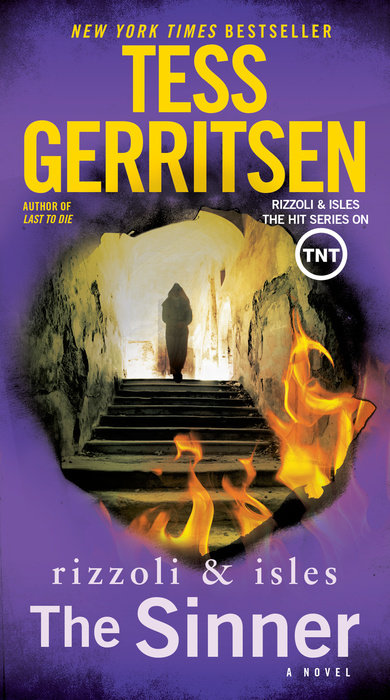