NEW YORK TIMES BESTSELLER • “A briskly paced, terrifically suspenseful work that steadily builds toward a tense and terrifying climax.”—People (Page-turner of the week)

He slips into homes at night and walks silently into bedrooms where women lie sleeping, about to awaken to a living nightmare. The precision of his methods suggests that he is a deranged man of medicine, prompting the Boston newspapers to dub him “The Surgeon.” Led by Detectives Thomas Moore and Jane Rizzoli, the cops must consult the victim of a nearly identical crime: Two years ago, Dr. Catherine Cordell fought back and filled an attacker before he could complete his assault. Now this new killer is re-creating, with chilling accuracy, the details of Cordell’s ordeal. With every new murder he seems to be taunting her, cutting ever closer, from her hospital to her home. And neither Moore nor Rizzoli can protect Cordell from a ruthless hunter who somehow understands—and savors—the secret fears of every woman he kills.

“[A] top-grade thriller . . . Sharp characters stitch your eye to the page. An all-nighter.”—Kirkus Reviews (starred review)

“Creepy . . . will exert a powerful grip on readers.”—Chicago Tribune

An excerpt from The Surgeon: A Rizzoli & Isles Novel

One year later Detective Thomas Moore disliked the smell of latex, and as he snapped on the gloves, releasing a puff of talcum, he felt the usual twinge of anticipatory nausea. The odor was linked to the most unpleasant aspects of his job, and like one of Pavlov’s dogs, trained to salivate on cue, he’d come to associate that rubbery scent with the inevitable accompaniment of blood and body fluids. An olfactory warning to brace himself.

And so he did, as he stood outside the autopsy room. He had walked in straight from the heat, and already sweat was chilling on his skin. It was July 12, a humid and hazy Friday afternoon. Across the city of Boston, air conditioners rattled and dripped, and tempers were flaring. On the Tobin Bridge, cars would already be backed up, fleeing north to the cool forests of Maine. But Moore would not be among them. He had been called back from his vacation, to view a horror he had no wish to confront.

He was already garbed in a surgical gown, which he’d pulled from the morgue linen cart. Now he put on a paper cap to catch stray hairs and pulled paper booties over his shoes, because he had seen what sometimes spilled from the table onto the floor. The blood, the clumps of tissue. He was by no means a tidy man, but he had no wish to bring any trace of the autopsy room home on his shoes. He paused for a few seconds outside the door and took a deep breath. Then, resigning himself to the ordeal, he pushed into the room.

The draped corpse lay on the table—a woman, by the shape of it. Moore avoided looking too long at the victim and focused instead on the living people in the room. Dr. Ashford Tierney, the Medical Examiner, and a morgue attendant were assembling instruments on a tray. Across the table from Moore stood Jane Rizzoli, also from the Boston Homicide Unit. Thirty-three years old, Rizzoli was a small and square-jawed woman. Her untamable curls were hidden beneath the paper O.R. cap, and without her black hair to soften her features, her face seemed to be all hard angles, her dark eyes probing and intense. She had transferred to Homicide from Vice and Narcotics six months ago. She was the only woman in the homicide unit, and already there had been problems between her and another detective, charges of sexual harassment, countercharges of unrelenting bitchiness. Moore was not sure he liked Rizzoli, or she him. So far they had kept their interactions strictly business, and he thought she preferred it that way.

Standing beside Rizzoli was her partner, Barry Frost, a relentlessly cheerful cop whose bland and beardless face made him seem much younger than his thirty years. Frost had worked with Rizzoli for two months now without complaint, the only man in the unit placid enough to endure her foul moods.

As Moore approached the table, Rizzoli said, “We wondered when you’d show up.”

“I was on the Maine Turnpike when you beeped me.”

“We’ve been waiting here since five.”

“And I’m just starting the internal exam,” Dr. Tierney said. “So I’d say Detective Moore got here right on time.” One man coming to the defense of another. He slammed the cabinet door shut, setting off a reverberating clang. It was one of the rare occasions he allowed his irritation to show. Dr. Tierney was a native Georgian, a courtly gentleman who believed ladies should behave like ladies. He did not enjoy working with the prickly Jane Rizzoli.

The morgue attendant wheeled a tray of instruments to the table, and his gaze briefly met Moore’s with a look of, Can you believe this bitch?

“Sorry about your fishing trip,” Tierney said to Moore. “It looks like your vacation’s canceled.”

In answer, Tierney reached for the drape and pulled it back, revealing the corpse. “Her name is Elena Ortiz.”

Though Moore had been braced for this sight, his first glimpse of the victim had the impact of a physical blow. The woman’s black hair, matted stiff with blood, stuck out like porcupine quills from a face the color of blue-veined marble. Her lips were parted, as though frozen in mid-utterance. The blood had already been washed off the body, and her wounds gaped in purplish rents on the gray canvas of skin. There were two visible wounds. One was a deep slash across the throat, extending from beneath the left ear, transecting the left carotid artery, and laying open the laryngeal cartilage. The coup de grace. The second slash was low on the abdomen. This wound had not been meant to kill; it had served an entirely different purpose.

Moore swallowed hard. “I see why you called me back from vacation.”

“I’m the lead on this one,” said Rizzoli.

He heard the note of warning in her statement; she was protecting her turf. He understood where it came from, how the constant taunts and skepticism that women cops faced could make them quick to take offense. In truth he had no wish to challenge her. They would have to work together on this, and it was too early in the game to be battling for dominance.

He was careful to maintain a respectful tone. “Could you fill me in on the circumstances?”

Rizzoli gave a curt nod. “The victim was found at nine this morning, in her apartment on Worcester Street, in the South End. She usually gets to work around six a.m. at Celebration Florists, a few blocks from her residence. It’s a family business, owned by her parents. When she didn’t show up, they got worried. Her brother went to check on her. He found her in the bedroom. Dr. Tierney estimates the time of death was somewhere between midnight and four this morning. According to the family, she had no current boyfriend, and no one in her apartment building recalls seeing any male visitors. She’s just a hardworking Catholic girl.”

Moore looked at the victim’s wrists. “She was immobilized.”

“Yes. Duct tape on the wrists and ankles. She was found nude. Wearing only a few items of jewelry.”

“A necklace. A ring. Ear studs. The jewelry box in the bedroom was untouched. Robbery was not the motive.”

Moore looked at the horizontal band of bruising across the victim’s hips. “The torso was immobilized as well.”

“Duct tape across the waist and the upper thighs. And across her mouth.”

Moore released a deep breath. “Jesus.” Staring at Elena Ortiz, Moore had a disorienting flash of another young woman. Another corpse—a blonde, with meat-red slashes across her throat and abdomen.

But Moore did not; the Sterling case, on which he had been lead detective, had never strayed far from his mind.

A year ago, thirty-year-old Diana Sterling, an employee at the Kendall and Lord Travel Agency, had been discovered nude and strapped to her bed with duct tape. Her throat and lower abdomen were slashed. The murder remained unsolved.

Dr. Tierney directed the exam light onto Elena Ortiz’s abdomen. The blood had been rinsed off earlier, and the edges of the incision were a pale pink.

“We picked off a few fibers before we washed her off. And there was a strand of hair, adhering to the wound margin.”

Moore looked up with sudden interest. “The victim’s?”

“Much shorter. A light brown.”

Rizzoli said, “We’ve already requested hair samples from everyone who came into contact with the body.”

Tierney directed their attention to the wound. “What we have here is a transverse cut. Surgeons call this a Maylard incision. The abdominal wall was incised layer by layer. First the skin, then the superficial fascia, then the muscle, and finally the pelvic peritoneum.”

“On Diana Sterling, there were a few jags in the incision, indicating hesitation, or uncertainty. You don’t see that here. Notice how cleanly this skin has been incised? There are no jags at all. He did this with absolute confidence.” Tierney’s gaze met Moore’s. “Our unsub is learning. He’s improved his technique.”

“There are other similarities. See the squared-off margin at this end of the wound? It indicates the track moves from right to left. Like Sterling. The blade used in this wound is single-edged, nonserrated. Like the blade used on Sterling.”

“It’s consistent with a scalpel. The clean incision tells me there was no twisting of the blade. The victim was either unconscious, or so tightly restrained she couldn’t move, couldn’t struggle. She couldn’t cause the blade to divert from its linear path.”

Barry Frost looked like he wanted to throw up. “Aw, jeez. Please tell me she was already dead when he did this.”

“I’m afraid this is not a postmortem wound.” Only Tierney’s green eyes showed above the surgical mask, and they were angry.

“There was antemortem bleeding?” asked Moore.

“Pooling in the pelvic cavity. Which means her heart was still pumping. She was still alive when this . . . procedure was done.”

Moore looked at the wrists, encircled by bruises. There were similar bruises around both ankles, and a band of petechiae—pinpoint skin hemorrhages—stretched across her hips. Elena Ortiz had struggled against her bonds.

“There’s other evidence she was alive during the cutting,” said Tierney. “Put your hand inside the wound, Thomas. I think you know what you’re going to find.” 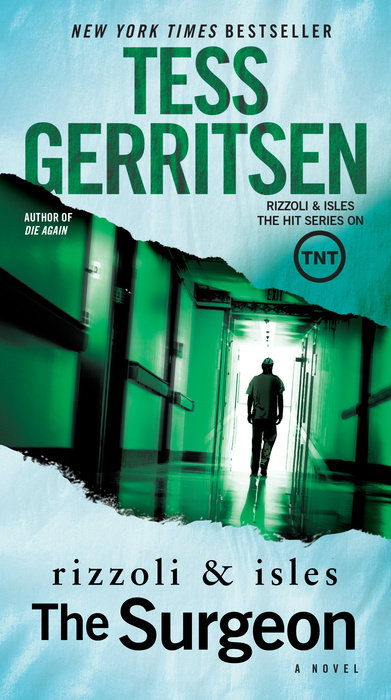