The Unmaking of America: A Recent History

NEW YORK TIMES BESTSELLER • When did America give up on fairness? The author of Fantasyland tells the epic history of how America decided that big business gets whatever it wants, only the rich get richer, and nothing should ever change—and charts a way back to the future.

During the twentieth century, America managed to make its economic and social systems both more and more fair and more and more prosperous. A huge, secure, and contented middle class emerged. All boats rose together. But then the New Deal gave way to the Raw Deal. Beginning in the early 1970s, by means of a long war conceived of and executed by a confederacy of big business CEOs, the superrich, and right-wing zealots, the rules and norms that made the American middle class possible were undermined and dismantled. The clock was turned back on a century of economic progress, making greed good, workers powerless, and the market all-powerful while weaponizing nostalgia, lifting up an oligarchy that served only its own interests, and leaving the huge majority of Americans with dwindling economic prospects and hope.

Why and how did America take such a wrong turn? In this deeply researched and brilliantly woven cultural, economic, and political chronicle, Kurt Andersen offers a fresh, provocative, and eye-opening history of America’s undoing, naming names, showing receipts, and unsparingly assigning blame—to the radical right in economics and the law, the high priests of high finance, a complacent and complicit Establishment, and liberal “useful idiots,” among whom he includes himself.

Only a writer with Andersen’s crackling energy, deep insight, and ability to connect disparate dots and see complex systems with clarity could make such a book both intellectually formidable and vastly entertaining. And only a writer of Andersen’s vision could reckon with our current high-stakes inflection point, and show the way out of this man-made disaster.

An excerpt from Evil Geniuses

As I was working on Fantasyland, reading and thinking about American history, I noticed more connections between the two phenomena—between our simultaneous switch in the 1970s and ’80s to a grisly old-fashioned political economy and to a strenuously, continuously familiar culture. Which led me to spend a couple of years reading and thinking more deeply about both.

A lot more deeply about the economics and politics. That’s what I’d mainly studied in college, but since then I’d mostly just read the news, skimmed along day to day and month to month like anybody whose job never required knowing a lot about deregulation, antitrust, tax codes, pensions, the healthcare industry, the legal fraternity, constitutional law, organized labor, executive compensation, lobbying, billionaires’ networks, the right wing, the dynamics of economic growth, stock buybacks, the financial industry and all its innovations—so many subjects of which I was mostly ignorant.

My immersion was revelatory. Reading hundreds of books and scholarly papers and articles and having conversations with experts made me more or less fluent in those subjects and, more, taught me many small things and one important big thing: what happened around 1980 and afterward was larger and uglier and more multifaceted than I’d known. Inequality is the buzzword, mainly because that’s so simple and quantifiable: in forty years, the share of wealth owned by our richest 1 percent has doubled, the collective net worth of the bottom half has dropped almost to zero, the median weekly pay for a full-time worker has increased by just 0.1 percent a year, only the incomes of the top 10 percent have grown in sync with the economy, and so on. Americans’ boats stopped rising together; most of the boats stopped rising at all. But along with economic inequality reverting to the levels of a century ago and earlier, so has economic insecurity, as well as the corrupting political power of big business and the rich, oligarchy, while economic immobility is almost certainly worse than it’s ever been.

Before I started my research, I’d understood the changes in the 1970s and ’80s hadn’t all just . . . happened, spontaneously. But I didn’t know how long and concerted and strategic the project by the political right and the rich and big business had been. One of my subjects in Fantasyland   is how conspiracy-theorizing became an American bad habit, a way our chronic mixing of fiction and reality got the best of us. Of course there are secretive cabals of powerful people who work to make big bad things happen, actual conspiracies, but the proliferation of conspiracy theories since the 1960s, so many so preposterous, had the unfortunate effect of making reasonable people ignore real plots in plain sight. Likewise, the good reflex to search for and focus on the complexities and nuances of any story, on grays rather than simple whites and blacks, can tend to blind us to some plain dark truths.

I still insist on a preponderance of evidence before I draw conclusions. I still resist reducing messy political and economic reality to catch-phrases like “vast right-wing conspiracy” and “the system is rigged,” but I discovered that in this case the blunt shorthand is essentially correct. It looks more like arson than a purely accidental fire, more like poisoning than a completely natural illness, more like a cheating of the many by  the few. After all, as the god of the economic right himself, Adam Smith, wrote in capitalism’s 1776 bible, The Wealth of Nations: “People of the same trade seldom meet together, even for merriment and diversion, but the conversation ends in a conspiracy against the public, or in some contrivance to raise prices.”

Evil Geniuses is the book I wish had existed a dozen years ago to help clarify and organize and deepen and focus my thinking and understanding and anger and blame. Like most people over the past decade, I’d noticed this fact here or that infographic there about inequality or insecurity or malign corporate power, but quickly moved on, flittered off to the next headline. But then I decided to go deep into the weeds in order to understand, then come out of the weeds to explain what I’d learned as clearly as I could. I wanted to distill and gather and connect the important facts and explanations in one compact package, to make a coherent picture out of all the puzzle pieces. There are lots of facts and figures in here, but not much jargon at all. By chronicling CEOs and billionaires and intellectu- als and zealots and operators planning and strategizing for years, together and apart, networking and plotting, even memorializing some plots in memos—so many jaw-dropping memos—I’ve tried to tell a compelling story as well as make a persuasive argument about what’s become of us.

So how did big business and the very rich and their political allies and enablers manage to convince enough Americans in the 1970s and ’80s that the comfortable economic rules and expectations we’d had in place for half of the twentieth century were obsolete and should be replaced by an older set of assumptions and protocols?

Most people at the time didn’t realize just how immense and pervasive the changes were and certainly not where they’d lead. Reagan’s election and landslide reelection were plainly big deals, some sort of national mandate, but at the time the 1980s seemed more like a post-1960s rever- sion to the historically typical, not really its own moment of wrenching transformation. Whereas during the 1960s, everyone was aware we were experiencing a great turning point in culture and politics, with almost everything changing in obvious ways—like how in the ’30s people were aware in real time that the Depression and New Deal were transformative, the beginning of a new America. The specific policy changes in the 1980s were profound in the aggregate, but beyond the nostalgic Reaganite Morning in America and freer-free-markets messaging, most of the changes were complicated and esoteric and seemed small, so they had a stealth quality. It didn’t feel quite like a paradigm shift because it was mainly carried out by means of a thousand wonky adjustments to government rules and laws, and obscure financial inventions, and big companies one by one changing how they operated and getting away with it—all of it with impacts that emerged gradually, over decades. Social Security and Medicare benefits were not cut, the EPA wasn’t abolished, labor unions weren’t banned. As it turned out, the 1980s were the ’30s but in reverse: instead of a fast-acting New Deal, a time-release Raw Deal.

But the reengineering was helped along because the masterminds of the economic right brilliantly used the madly proliferating nostalgia. By dressing up their mean new rich-get-richer system in old-time patriotic drag. By portraying low taxes on the rich and unregulated business and weak unions and a weak federal government as the only ways back to some kind of rugged, frontiersy, stronger, better America. And by choosing as their front man a winsome 1950s actor in a cowboy hat, the very embodiment of a certain flavor of American nostalgia.

Of course, Ronald Reagan didn’t cheerfully announce in 1980 that if Americans elected him, private profit and market values would override all other American values; that as the economy grew nobody but the well-to-do would share in the additional bounty; that many millions of  middle-class jobs and careers would vanish, along with fixed private pensions and reliable healthcare; that a college degree would simultaneously become unaffordable and almost essential to earning a good income; that enforcement of antimonopoly laws would end; that meaningful control of political contributions by big business and the rich would be declared unconstitutional; that Washington lobbying would increase by 1,000 percent; that our revived and practically religious deference to business would enable a bizarre American denial of climate science and absolute refusal to treat the climate crisis as a crisis; that after doubling the share of the nation’s income that it took for itself, a deregulated Wall Street  would nearly bring down the financial system, ravage the economy, and pay no price for its recklessness; and that the federal government he’d committed to discrediting and undermining would thus be especially ill-equipped to deal with a pandemic and its consequences.

Kurt Andersen is the bestselling author of Evil Geniuses, Fantasyland and the novels True Believers, Heyday andTurn of the Century, among other books. He contributes to The New York Times and was host and co-creator of Studio 360, the Peabody Award–winning public radio show and podcast. He also writes for television, film, and the stage. Andersen co-founded Spy magazine, served as editor in chief of New York, and was a cultural columnist and design critic for Time, New York and The New Yorker. He graduated from Harvard College and lives in Brooklyn.

The Unmaking of America: A Recent History 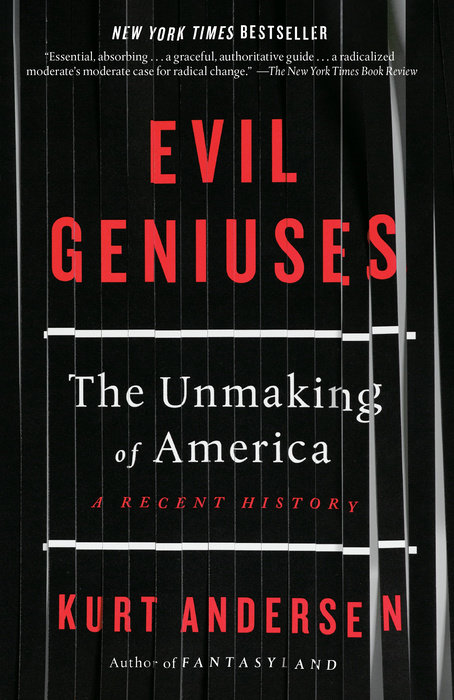