“[A] beautiful book of hope and inspiration . . . Pope Francis speaks frankly about problems facing the young and the elderly, Catholic and non-Catholic.”—Publishers Weekly (starred review)

Pope Francis examines the role of millennials in the future of the Catholic Church in this urgent call to believers of all generations to work together to build a better world.

Since his election in 2013, Pope Francis has reinvigorated the Catholic Church and become one of the most popular global leaders. Now, in this extraordinary interview with journalist Thomas Leoncini, His Holiness reminds Catholics of all ages that “God is young; He is always new.” God has energy, spontaneity, and the desire for change—youthful qualities that can be rallied to fight the many problems facing the Catholic Church and the world at large. In this inspiring volume, published in English for the first time, Pope Francis’s solution to these challenges is simple: a “revolution of tenderness” that unites believers of all ages in a mission to remake the world.

“God is young! God is the Eternal One who has no time, but is able to renew and rejuvenate Himself and all things continually. The most distinctive attributes of the young are also His. He is young because He makes all things new and loves innovation; because He astonishes and loves astonishment; because He dreams and wants us to dream.”—Pope Francis

Praise for God Is Young

“Enlightening . . . The interview is extremely wide-ranging. [Pope Francis’s] answers contemplate not only philosophy but such quotidian things as plastic surgery, pets, cell phones, consumerism, and more. The pope’s answers are generous in their length, some being even mini homilies. But all are thoughtful and thought-provoking, of interest and benefit to readers of all ages.”—Booklist (starred review)

An excerpt from God Is Young

Pope Francis, I would like to start by asking you: What is youth?

Youth does not exist. When we talk about youth, we are often unconsciously referring to myths about youth. I like to think that youth does not exist, only young people. Just as old age does not exist, but old people do. And when I say “old” people I don’t mean it as a bad word, on the contrary: It’s a very beautiful word. We must be joyful and proud of being old, just as we are normally proud of being young. Old age is a privilege: It means having experience, being able to know and recognize our faults and our merits; it means the ability to be potentially renewed, just as when we were young; it means having acquired the understanding necessary to accept the past and, above all, to have learned from the past. Often we allow ourselves to be overwhelmed by the “culture of the adjective,” without the substantiation of a noun. Youth, of course, is a noun, but it is a noun without any real substance; it is an idea that remains the orphan of a fanciful concept.

What do you see when you think of a young person?

I see someone who is searching for his own path, who wants to fly on his two feet, who faces the world and looks out at the horizon with eyes full of the future, full of hope as well as illusions. A young person stands on two feet as adults do, but unlike the adults whose feet are parallel, he always has one foot forward, ready to set out, to spring ahead. Always racing onward. To talk about young people is to talk about promise and to talk about joy. Young people have so much strength; they are able to look ahead with hope. A young person is a promise of life that implies a certain degree of tenacity; he is foolish enough to delude himself and resilient enough to recover from that delusion.

Then, too, we can’t talk about young people without touching on the theme of adolescence, because we must never underestimate that phase of life, which is probably the most difficult and the most important in a person’s years. Adolescence marks the first true conscious contact with identity and represents a transitional phase not only in the child’s life, but the life of the entire family. It is an intermediate phase, like a bridge that leads to the other side. And for this reason adolescents are neither here nor there, they are on their way, on the road, on the move. They are not children—­nor do they want to be treated as such—­but they are not adults, either. Yet they want to be treated as adults, especially when it comes to privileges. So we can probably say that adolescence is a state of inevitable tension, an introspective tension of the young. At the same time it is so intense that it is able to shake up the entire family, which is precisely what makes it so important. It is the young man’s and the young woman’s first revolution, the first life transformation, the transformation that changes one so much that it often upends friendships, loves, daily life as well. When we are adolescents the word “tomorrow” cannot be used with certainty. Even as adults we should be more cautious in uttering the word “tomorrow,” particularly these days, but never are we as aware of the moment and the importance it holds than as adolescents. The moment, for the adolescent, is a world that can overturn his whole life. He thinks much more about the present during adolescence than during all the rest of his existence. Adolescents seek confrontation, they ask questions, they challenge everything, they look for answers. I can’t stress enough how important it is to question everything. Adolescents are eager to learn, eager to fend for themselves and become independent. It is during this time that adults must be more understanding than ever and try to demonstrate the proper way through their actions, rather than insisting on teaching with words alone.

Young people go through different, even abrupt, states of mind, and their families with them. It is a phase that has its risks, undoubtedly, but above all it is a time of growth, for them and for their entire family.

Adolescence is not a pathology, and we cannot treat it as if it were. A child who experiences his adolescence positively—­however difficult it may be for the parents—­is a child with a future, with hope. I often worry about the current tendency to “medicate” our children at an early age. It seems we want to solve all our children’s problems with medication, or by controlling their lives to “make the most of time,” and so our children’s agendas become busier than that of a high-­level executive. I stress again: Adolescence is not a pathology that we must combat. It’s part of normal, natural growth in our children’s lives.

What are the first images of your youth that come to mind? Try to picture yourself in Argentina when you were twenty . . .

At that age I was in the seminary. I had a very severe encounter with suffering: A piece of my lung was removed due to three cysts. This very intense experience colors my memory of the time you ask me to recall, but there is one very intimate thing I remember well: I was full of hopes and dreams.

Do you remember any of your dreams?

I’ll tell you an anecdote, so that you will understand the subtle gap between desires and reality. I was almost seventeen, I remember it was the day the musician Sergey Sergeyevich Prokofiev died. I loved his music very much. I was in the courtyard of my maternal grandmother’s house, sitting at the table in the garden. I asked my grandmother: “How is it possible to be as brilliant as Prokofiev, to create the things he did?” And she replied: “Well, you see, Jorge, Prokofiev wasn’t born that way; rather, he became that way. He struggled, worked hard, suffered, constructed: The beauty that you see today is the work of yesterday, of all that he suffered and went through in silence.” I have never forgotten my conversations with my two grandmothers, figures whom I think of constantly and who are very important to me.

Have there been dreams that did not come true?

Of course, and some I found frustrating. Like when I wanted to go to Japan to be a missionary but they wouldn’t send me because of my lung operation. From a very young age, some people wrote me off, and yet I’m still here today, so it turned out all right . . . It’s always best not to pay too much attention to those who wish us ill, don’t you think?

Your calling from God came at a young age; do you recall the exact moment?

The strong calling from God occurred when I was nearly seventeen, on September 21, 1953, to be exact. I was on my way to meet my school friends for a day in the country. September 21 is the first day of spring in Argentina, and in those days there was an actual holiday dedicated to us young people. I was Catholic like my family, but prior to that day I had never thought of either the seminary or a future within the Church. Maybe as a child, when I was an altar boy, but it was a tenuous thing. Walking along, I saw the open door of the parish church and something drove me to go in. Inside I saw a priest coming toward me. I immediately felt a sudden desire to confess. I don’t know what exactly happened during those moments, but whatever it was, it changed my life forever. I left the parish church and went home. I understood in a very strong, clear way what my life would be: I was to become a priest. In the meantime, I was studying chemistry, I started working in a test lab, I had a girlfriend, but inside me the idea of the priesthood continued to gain ever greater force.

Pope Francis
Jorge Mario Bergoglio was born in Buenos Aires on December 17, 1936. On March 13, 2013, he became the Bishop of Rome and the 266th Pope of the Catholic Church. 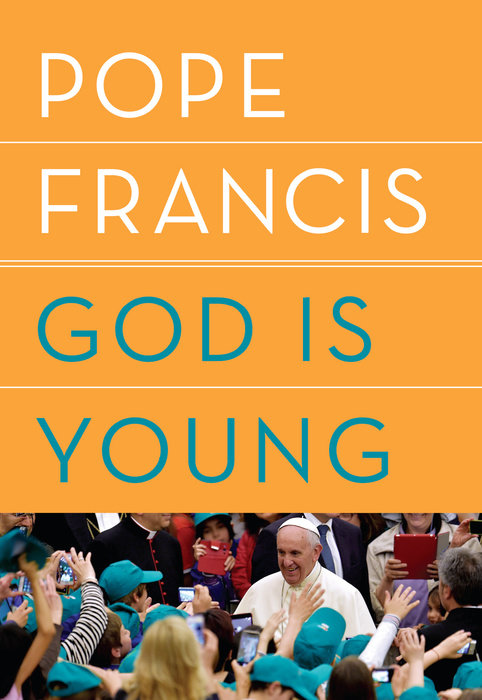