NEW YORK TIMES BESTSELLER • Experience the first official adventure in Magic: The Gathering’s multiverse in nearly a decade as the ultimate battle begins on Ravnica.

Teyo Verada wants nothing more than to be a shieldmage, wielding arcane energies to protect his people from his world’s vicious diamondstorms. When he’s buried alive in the aftermath of his first real tempest, the young mage’s life is about to end before it can truly begin—until it doesn’t. In a flash, a power he didn’t know he had whisks him away from his home, to a world of stone, glass, and wonder: Ravnica. Teyo is a Planeswalker, one of many to be called to the world-spanning city—all lured by Nicol Bolas, the Elder Dragon. Bolas lays siege to the city of Ravnica, hungry for the ultimate prize: godhood itself. His unparalleled magic and unstoppable army appear poised to bring the city to utter ruin.

Among those who stand in the way of Bolas’s terrifying machinations are the Gatewatch, Planeswalkers sworn to defeat evil, no matter where it’s found. But as they work to unite the other mages and mount a defense of the city and its people, the terrifying truth of Bolas’s plan becomes clear. The Elder Dragon has prepared a trap to ensnare the most powerful mages from across the Multiverse—and it’s too late to escape.

As forces great and small converge on the city and the battle rages, the stakes could not be higher. If the Gatewatch falters and the Planeswalkers fail, the curtain will fall on the age of heroes—and rise on the infinite reign of Nicol Bolas.

An excerpt from War of the Spark: Ravnica (Magic: The Gathering)

Chandra Nalaar, Planeswalker and pyromancer, sank deeper into the over-soft armchair in her mother’s new apartment in the city of Ghirapur on the plane of Kaladesh. She was anxious, frustrated, angry, frightened and more than a little bored.

Pia Nalaar had prepared a tray of dark, rich hot chocolate for her daughter and her daughter’s friends and had then departed for a council meeting, saying her goodbyes to Chandra—as she always did—as if she might never see her again.

Now Chandra, cup of chocolate untouched on a side table, slouched with her chin practically touching her chest as she glanced around at her companions. Over on the sofa, the mind-mage Jace Beleren, looking weary and haggard, stared into his own cup of brown liquid, as if somehow it might reveal the true secret of defeating the Elder Dragon, Nicol Bolas. Beside him, the time-master, Teferi, leaned back, resting his eyes and breathing deeply. Perched on stools at the kitchen counter, the lion-headed healer, Ajani Goldmane, chatted pleasantly with Chandra’s sometimes pyromantic mentor, Jaya Ballard, about bird-watching, of all things. The silver golem Karn stood motionless in the corner, seemingly engrossed in perfecting his already phenomenal resemblance to a statue. Planeswalkers all, they were the Gatewatch, the supposed saviors of the Multiverse. Well, technically, Jaya and Karn hadn’t actually joined the ’watch, which is to say they had declined to take the Oath. But they were here to fight beside the rest against the dragon Bolas. To fight and probably to die.

In a hurried motion, Jace put his cup down on the coffee table, as if the hot chocolate suddenly frightened him. “He’s taking too long,” Jace said.

“He” was Gideon Jura, the soul of the Gatewatch—or so Chandra had come to believe. Gids had planeswalked back to Dominaria to find yet another member of the ’watch, the necromancer Liliana Vess, who should have met them here on Kaladesh but had failed to show. Jace had already made it abundantly clear he thought Gideon was on a fool’s errand, that Liliana had never had any intention of joining them in their fight against Bolas, that she had exploited the Gatewatch as a tool to slay her own personal demons, literally, and that now that those demons were dead and gone, her use for her so-called friends had likewise come to an end.

But Gids had refused to believe that, and Chandra had agreed with him, as had Jaya, Karn and Teferi. All five of them felt strongly that Liliana—despite her own well-manicured façade of selfishness—was indeed their true friend and ally. That she cared about them, even Jace. Maybe especially Jace.

They had slept together, right?

But Liliana definitely cared about Gideon, whom she mocked unceasingly but with affection. And Chandra didn’t think she was flattering herself believing that Liliana cared about her, too. Chandra thought of Liliana as an older sister.

But a sister nonetheless. Chandra was confident Gideon would return at any moment with Liliana in tow, ready to join the conflict—the final conflict—against the evil dragon mastermind.

But Chandra had to agree Gideon was taking too long. She wasn’t exactly worried about him. Gideon’s powers made him nigh-on invulnerable. The rest might fall—Chandra might fall—yet Gids would fight on. And on, and on, and on . . .

It’s just who he is, she thought.

The indomitable warrior, the unrelenting juggernaut with that unerring sense of justice and those washboard abs. Once upon a time, Chandra had sported a major crush on Gids. She was over that now, but he pretty much remained her best friend in the world. On any world. In the Multiverse.

She sighed. She had been a Planeswalker since she was a preteen, but it was still occasionally difficult to adjust her vocabulary to what that meant. Chandra Nalaar was one of a select group of individuals who could travel—planeswalk— between dimensions, passing from one plane to the next, from one world to another. Every world she had ever ’walked to had its own set of troubles and turmoil. So none of them needed new dangers arriving from planes unknown. That’s why the Gatewatch had been formed. So that Planeswalkers who gave a damn would be there to fight, to safeguard worlds from interplanar threats like Nicol Bolas.

It had become clear over the last few weeks that every single threat they had faced had been generated, initiated, concocted by the dragon himself. And that’s not even counting their encounter on the Plane of Amonkhet, where Bolas had flat-out kicked their collective asses. Of course, the Gatewatch hadn’t had Jaya or Teferi or Karn with them then. Just Chandra, Jace, Gids, Liliana and . . .

She sank still deeper into her chair. Gideon was taking too long. If the seven (or hopefully eight) of them were going to arrive at their destination ahead of Bolas and prepare for the coming battle, they needed to get planeswalking already. Frankly, the suspense was killing her.

Chandra stuck out her lower lip and blew upward, a lazy attempt to move one of her wild red tresses out of the way of her left eye. It had literally no effect. She tried again. And a third time.

And then she shot to her feet, galvanized by a call from across the planes. The others reacted with less motion but no less concern.

“You feel that?” Chandra asked, knowing they had.

All of them nodded silently. She looked upward, toward the sky, and of course saw only the roof of her mother’s apartment. But between her and the roof were lights that sparkled like gemstones and called out to her to follow them to . . . to . . . to Ravnica!

Greg Weisman’s career in television and comic books spans decades. After starting as an editor for DC Comics, where he also wrote Captain Atom, he created and developed Disney’s original series Gargoyles, later writing the Gargoyles and Gargoyles: Bad Guys comic books for SLG Publishing. He has worked as a writer, producer, story editor, and voice actor on Sony’s The Spectacular Spider-Man and Warner Bros.’s Young Justice, and as a writer and executive producer on the first season of Star Wars Rebels. His comic book writing credits include DC’s Young Justice, Star Wars: Kanan, and Marvel’s Starbrand and Nightmask. Weisman also wrote the original novels Rain of the Ghosts and Spirits of Ash and Foam, as well as the World of Warcroft novels World of Warcraft: Traveler and World of Warcraft: Traveler: The Spiral Path. He is blessed to have an amazing wife and two fantastic (grownup) kids. 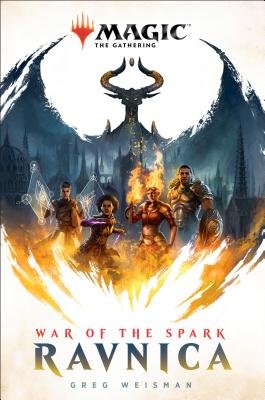