Return to the multiverse of Magic: The Gathering as the hunt for Liliana Vess is on in the aftermath of the War of the Spark.

The Planeswalkers have defeated Nicol Bolas and saved the Multiverse—though at grave cost. The living have been left to pick up the pieces and mourn the dead. But one loss is almost too great to bear: Gideon Jura, champion of justice and shield of the Gatewatch, is gone. As his former comrades Jace and Chandra struggle to rebuild from this tragedy, their future, like the future of the Gatewatch, remains uncertain.

As the Gatewatch’s newest member, Kaya aims to help write that future. In joining, she pledged an oath to protect the living and the dead, but now that oath will be tested. The grieving guild masters of Ravnica have tasked her with a grave mission suited to her talents as a hunter and assassin—a mission she is ordered to keep secret from the Gatewatch. She must track down and exact retribution on the traitor Liliana Vess.

But Liliana Vess has no interest in being found. Forsaken by her friends, she fled Ravnica after the defeat of Bolas. She was hostage to his wicked will, forced to assist in his terrible atrocities on pain of death—until Gideon, the last one who believed in her goodness, died in her place. Haunted by Gideon’s final gift, and hunted by former allies, Liliana now returns to a place she’d thought she’d never see again, the only place she has left: home.

An excerpt from War of the Spark: Forsaken (Magic: The Gathering)

Maybe that was necessary right now, as she helped Arlinn Kord carry off the desiccated corpse of a man she barely knew, a Planeswalker named Dack Fayden, who’d sacrificed his Spark and his life to save Ravnica—to save the very Multiverse—from the dragon Nicol Bolas.

Now Bolas was dead, too. Like Fayden, he had ultimately lost his Spark to the Eternals he himself had created, and Kaya and all of Ravnica had watched him dissolve, disintegrate into ashes that blew away on the wind.

It had been a stupendous victory—and a costly one. Kaya was certain she should feel it more, both the exaltation of triumph and the pain of the losses that earned it.

Instead—as she and Arlinn lowered Dack’s body onto an empty wooden board between the cadavers of Domri Rade and a viashino named Jahdeera—what passed for her emotions seemed, what—

Shrouded? Is that it?

Or was the metaphor simply suggested by the thin white sheet of spidery silk that the Golgari priestess, Matka Izoni, was rapidly weaving over all three corpses?

Kaya barely knew any of them. Rade had been an idiot and a turncoat. Jahdeera had followed him blindly. But Dack had been an actual hero, part of the team that shut down the Planar Bridge, stopping the flow of Eternals pouring into Ravnica from Amonkhet. From there he could have planeswalked anywhere. Instead, he chose to return and fight the good fight. To fight—and then to die for having made that choice.

If I can’t feel anything for him . . . then who exactly is wearing that silken shroud?

Kord turned around to fetch another corpse, but Kaya decided she’d had enough of that grim work.

All around her, a joyous victory celebration had erupted—punctuated by mourners crying over their very personal losses. Each extreme created contrast for the other. The elven girl climbing over the wreckage of Bolas’ fallen statue, and the human boy swinging from the branch of the fallen world-tree Vitu-Ghazi, seemed all the more carefree when set against the goblin mother and child desperately mourning over what remained of their husband and father, whose lower half had been crushed beneath the foot of the God-Eternal Bontu.

The sinking sun passed between two buildings and a sudden ray of light caused Kaya to squint, caused her eyes to water. It was the closest thing to tears she had managed since this whole thing had begun.

Maybe the real tears will come later. Catch me unawares and lay me out.

She found herself hoping so. She didn’t like feeling dead inside. She’d had enough of death for one lifetime—which was more than a little ironic, considering her profession. Kaya was—or had been, until very recently—a ghost-assassin. Her magic allowed her to send spirits to a final rest. Death was quite literally her business. But until today, she’d never felt quite so dead herself.

Dead and dead tired. With the battle over and the adrenaline rush receding, Kaya, the reluctant Orzhov Syndicate guildmaster, could once again feel the full force of the thousands upon thousands of Orzhov debtor contracts that weighed down her soul.

Ah, it’s tempting, so tempting, to simply declare all those debts forgiven.

But she knew such an act would destroy the Orzhov, and she feared that if even one guild fell, the delicate balancing act that was Ravnica would topple with it. The world-city literally (and magically) depended on its ten guilds operating, if not in harmony, then at least in balanced opposition to one another. And Kaya had not worked so hard to save Ravnica only to be the cause of its downfall by a different means. So the debts would not be forgiven, and for now, at least, she would continue to carry their weight.

She wanted, needed, to see a friendly face. By this time she had many close friends on Ravnica. Ral and Tomik. Hekara. Lavinia. Even Vraska. And yet the two people she felt closest to, most wanted to see, were two teenagers she had only just met this very morning: Teyo and Rat.

There! That’s an emotion. Not much of one, I’ll grant you. But it’s something. Chase that!

She started moving through the crowd with a purpose, trying to find the young shieldmage and the even younger thief. Not that Kaya was all that old. She wasn’t even thirty years old, herself. But relative to those two, she felt like one of the Ancients of Keru.

Why was she so attached to them? How had it happened so quickly? All right, sure, each had saved her life today—multiple times. But during this “War of the Spark,” as folks had already dubbed it, her life had been saved by two or three dozen different individuals, and she herself had saved easily three times that number (whatever that number might be). No, it was more than that, she felt sure.

It’s their purity. What they have is what I’m missing.

Teyo was so naïve. But there was a hidden strength beneath that naïveté. A strength he had only barely discovered—and still didn’t truly believe he had.

And Rat? Araithia “Rat” Shokta’s life had been . . . impossible. Truly. Impossible. It was a miracle she had survived it. Yet the true miracle was that she hadn’t simply survived it, she had embraced it and had maintained an optimism that was even more impossible.

They were two pure souls. Relative to them, Kaya felt a bit like a vampire, a creature of darkness desperate to feed off their bright light. That thought scared her a bit, and she literally stopped in her tracks. But she took a deep breath.

It’s a metaphor, Kaya. You’re not actually taking anything from either of them. In fact, there are gifts you can give them. Things that might make them happy. Or at least make their lives a bit easier. Before you say goodbye.

Buoyed by that, she started forward again and soon spotted them together. Well, of course they were together. The sixteen-year-old Rat had adopted the nineteen-year-old Teyo the moment he had arrived on Ravnica.

As she approached the two kids, Teyo spotted her and said to Rat, “Don’t forget, you still have the two of us.”

Kaya wasn’t sure she could leave Ravnica. She’d been told that all those Orzhov contracts had bound her to the plane. But if she did . . .

She said nothing for now. Still weighing her options, she linked arms with them both and walked on.

With her entourage quite literally in tow, she joined a group of Planeswalkers and Ravnicans, most of them friends of hers (or at least comrades in arms), just to be around people. They were debating something. She couldn’t focus on what, and honestly didn’t much care.

The angel Aurelia approached. She was carrying something with an almost devout air that brought Kaya back into the moment. At first she couldn’t tell what the thing was. Then she saw it was a man’s breastplate, charred and blackened. She didn’t immediately grasp its significance. Each of the ten guilds had so many rituals and traditions. (She barely understood all the Orzhov’s traditions, and she was theoretically their leader.) Maybe Aurelia’s Boros Legion worshipped this holy piece of armor and trotted it out after every victory.

Then Chandra Nalaar said, “We should bury that on Theros. I think Gids’d like that.” And Kaya knew. This breastplate was all that remained of Gideon Jura, a Planeswalker who had given his life to save Ravnica and the Multiverse. If anyone had been a hero of this War of the Spark, it had been Gideon.

Ajani Goldmane, the leonin Planeswalker, responded to Chandra: “What he’d like is to know it’s not over.”

“It’s not over?” Teyo asked, horrified.

Ajani chuckled and placed a reassuring paw on Teyo’s shoulder. “I do believe the threat of Nicol Bolas has passed. But we cannot pretend Bolas will be the last threat to face the Multiverse. If we truly wish to honor our friend Gideon, we need to confirm that the next time a threat rises, the Gatewatch will be there.”

She’d never heard of it before today. And yet it seemed that this group, this team of half a dozen or so Planeswalkers, had been protecting the Multiverse for months, from Bolas and multiple other threats, as well. They had led the charge today, and they had suffered for it. They had known what was coming, and they had come to face it anyway. And if they hadn’t come, there was no way anyone on Ravnica would have survived. Of that, Kaya was quite sure.

Greg Weisman’s career in television and comic books spans decades. After starting as an editor for DC Comics, where he also wrote Captain Atom, he created and developed Disney’s original series Gargoyles, later writing the Gargoyles and Gargoyles: Bad Guys comic books for SLG Publishing. He has worked as a writer, producer, story editor, and voice actor on Sony’s The Spectacular Spider-Man and Warner Bros.’s Young Justice, and as a writer and executive producer on the first season of Star Wars Rebels. His comic book writing credits include DC’s Young Justice, Star Wars: Kanan, and Marvel’s Starbrand and Nightmask. Weisman also wrote the original novels Rain of the Ghosts and Spirits of Ash and Foam, as well as the World of Warcroft novels World of Warcraft: Traveler and World of Warcraft: Traveler: The Spiral Path. He is blessed to have an amazing wife and two fantastic (grownup) kids. 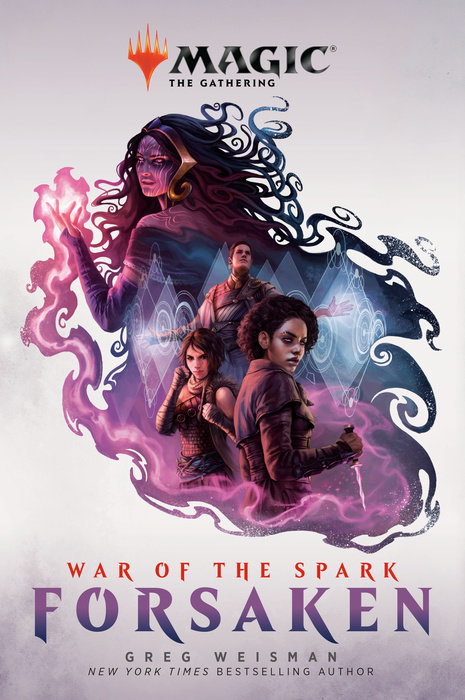