You never saw him. But he saw it all.

When a vibrant young woman is murdered while on a video chat, a small-town detective wades into a circle of friends and lovers with dangerous secrets—in the new novel from the acclaimed author of the “enjoyably chilling”* She Lies in Wait.

Aidan Poole logs on to his laptop late at night to Skype his girlfriend, Zoe. To his horror, he realizes that there is someone else in her flat. Aidan can only listen to the sounds of a violent struggle taking place in the bathroom—and then the sound of silence. He is desperate to find out if Zoe is okay. But then why is he so hesitant to call the police?

When Aidan’s cryptic messages finally reach them, Detective Chief Inspector Jonah Sheens and his team take the case—and discover the body. They soon find that no one has a bad word to say about Zoe, a big hearted young artist at the center of a curious web of waifs and strays, each relying on her for support, each hiding dark secrets and buried resentments. Has one of her so-called “friends” been driven to murder? Or does Aidan have the biggest secret of them all?

An excerpt from Watching from the Dark

He asked himself, later, what difference it would have made if he had. This was what you did when you were tying up a case. You looked for mistakes and for their opposite. For the good things you’d done. You asked yourself how they had affected the investigation, and in this case, the biggest question mark was over the report of a murder that he almost let slide. Whether things would have gone differently if he’d acted earlier, and how different they would have been if he had never acted at all.

The report made itself known during the tail end of a tortuous Friday-morning caseload meeting, made decidedly worse by Detective Chief Superintendent Wilkinson being away. Without him to push everything through, the meeting had descended into rambling discussions on every detail. It was soul-destroyingly boring.

But then they had finally limped through to new case allocation, and Jonah had watched his intense counterpart in the uniformed police, Yvonne Heerden, take on three thefts and a traffic accident.

“We’ve had an unauthenticated murder claim passed on by the crime desk,” Heerden said next. “I’ve given you a transcript,” she added to Jonah, “but I think it’s unlikely to come to anything so we’re happy to take it. The caller claims that his girlfriend was murdered while he was talking to her on Skype, but that he didn’t see the killer. He hung up when asked for his name and details. Crime desk tried to look her up and found no trace of a woman with that name anywhere online.”

Jonah skimmed over the transcript, noting that the girl’s name was Zoe Swardedeen.

Heerden was probably right. This would, in all likelihood, involve admin of a simple kind. Cross-checking with missing persons. Trying a few variations of the spelling.

“OK?” Heerden asked as he read on.

There was something in the phrasing used in the call that made Jonah hesitate. Something that unsettled him.

He was aware that Heerden was waiting for an answer, however, and he trusted her and her team to do this right. His own team was neck-deep in a complex blackmail case and had little time for unnecessary extras.

“Sure,” he said. “Keep me posted if it comes to anything.”

The meeting moved on to cover another multi-casualty traffic accident that had probably been caused by a truck driver using his phone. Jonah was glad he didn’t have to be involved. Those were the kinds of cases that scarred you. The kind that made you impulsively check up on all your loved ones. The kind that made life seem flimsy and the world a random, uncaring place.

With those thoughts foremost in his mind, his uneasiness about a strange, anonymous murder report was pushed aside.


There was so much Aidan should have been doing. Three of his students had sent essays over, and he had a whole raft of faculty admin, but he hadn’t managed to read a line. He’d opened email after email but failed to understand them through the pounding of his heart and the ringing in his ears. He wasn’t seeing words; he was seeing the slow opening and closing of a door, played over and over.

The not knowing was the worst. He would loop through a conviction that it had all been some strange misunderstanding, or a dream, and then he would remember that Zoe had never reappeared from the bathroom. Not while he’d been watching. He knew in his soul that she had been in desperate need of help, and that she might never have received it.

He’d searched news and social-media sites the moment he was up, looking for any mention of an incident. He’d rechecked at regular intervals since, too, but there was no mention of any murder or violence in Southampton. Nothing about a young woman being attacked. A total void of anything relevant.

There was a way to find out, if he felt he could take it, of course. He could call the police again. This time, when they asked him for his name and address, he could give it to them.

He’d come close last night. The police call handler he’d been put through to had been female. He’d heard her typing everything he’d said, turning it into data. She’d typed away when he’d admitted he didn’t know the number of the pay-as-you-go phone he was calling from, because it was a spare he’d dug out from his desk. And then she’d typed up his attempt to tell her that he thought his girlfriend had been murdered.

Right at the end of the call, she’d asked for his name. There had been a long, tense silence as he’d teetered on the edge of telling her. And then he’d heard a car door slam outside.

He’d ended the call and listened, tense and sick, for more sounds. He tried telling himself that there was nothing to be afraid of, but he knew it wasn’t true. There was a lot to be afraid of. There was Zoe being killed in front of him. There was the truth all pouring out.

He couldn’t let it happen. He had everything to lose. Everything.

He’d thought about closing the Skype window, to shut out the scene. But it was the only way he had of checking on Zoe. Of waiting to see if the police arrived at her flat.

Midnight had come and gone, punctuated only by his eyes flicking over to the clock at the bottom right of the screen. Where were the bloody police?

There had still been nothing by two-forty, when he had finally closed the program in a rush of despair and gone to bed.

It was now eleven hours since he’d seen the door to Zoe’s flat swing open. Eleven hours, and no sign, no message, no news report.

But every time he thought about that, chilled sweat would bloom on his skin. Knowing that he couldn’t risk it created a frustration that was visceral. He could feel it in his stomach and in his loins, and it made sitting still unbearable.

Zoe, he thought, willing her to call him. Zoe, please. F***ing call.


Jonah approached Domnall O’Malley, the only visible member of his team, on his way through the bright, modern expanse of CID.

“Are you genuinely the first one in?” he asked, disbelieving.

“Ah Jesus, no,” O’Malley answered, leaning his heavy frame back in his chair. “I rolled up about five minutes ago. Juliette’s been here since seven-something. Ben’s a little late, though, he says.”

“I know,” O’Malley said. “That threw me, too. Maybe he’s finally gone and got himself a girlfriend and didn’t sleep well.”

“Ah, you’re right, so. Well, whatever it was, I plan to take the piss mercilessly.”

Jonah grinned and went on to his office, leaving the door open. He took his phone out of his pocket briefly, wondering whether he’d have a message today, or whether Jojo was once again in some desolate place with no signal.

Their communications were an unquestionable bright spot to his days. Her irreverent banter and humor had the power to make him grin for a good while afterward. It was such a refreshing feeling. He’d spent so many months pining for Michelle, his most recent ex-girlfriend. He’d thought he might spend the rest of his life missing her.

The sudden reappearance in his life of Jojo, his teenage crush, had changed all of that. They’d agreed that an investigation she’d been involved in would need to be tied up before they could see each other. And Jojo had then made the decision to take herself traveling until repairs to her house were done. Given that her social circle had also been devastated by a murder inquiry, it was only natural for her to need space. But he’d still felt a pang when she’d told him she was going.

She was in Namibia now, gradually touring a series of spectacular climbing sites that were miles from anywhere. Jonah should have been nervous at her being out there alone in the wilderness, but for some reason he wasn’t. Perhaps it had something to do with how fiercely capable she had always been, and the fact that she’d survived a serious attempt on her life.

Well, there was nothing from Jojo. He put the phone down and logged on to his desktop. A few more blackmail files had been added to the database but he took it all in only vaguely. For some reason, looping through his mind were the words Please help her. She could still be alive.

Gytha Lodge is the author of She Lies in Wait. She studied English at Cambridge University and received an MA in creative writing from the University of East Anglia. 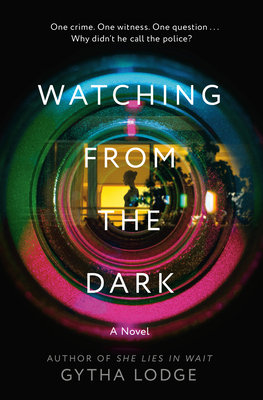