He’s lying next to you. He’s not breathing. . . . And the killer might have been you.

Detective Chief Inspector Jonah Sheens is on the trail in this explosive crime novel from the acclaimed author of She Lies in Wait and Watching from the Dark.

“Secrets and self-sabotage abound in this gripping psychological thriller.”—The Guardian

Louise wakes up. Her head aches, her mouth is dry, her memory is fuzzy—but she suspects she’s done something bad.

She rolls over toward her husband, Niall. The man who, until recently, made her feel loved.

But it’s not Niall lying beside her. In fact, she’s never seen this man before.

As Louise desperately struggles to piece her memories back together, it’s clear to Jonah Sheens and his team that she is their prime suspect—though they soon find she’s not the only one with something to hide.

Did she do it? And, if not, can they catch the real killer before they strike again?

In this gripping novel, a young woman finds that trying to make sense of her life’s bad choices might prove the most dangerous reckoning there is.

An excerpt from Lie Beside Me

The call reached Juliette Hanson at 6:46 a.m. It was an ice-cold first of March, early enough that there were still stars out beyond the gap in her badly fitted curtains and cold enough for an overnight fall of snow to have frozen into bright, glittering crystals. It was also a Saturday, but Hanson was wide-awake now. More awake than she’d been on any day this week.

Unidentified male found dead, the DCI had said. It was the most piercing of alarms. She was already swinging her feet out of bed as he went on to read the address.

She’d never heard of Saints Close, but the chief added that it was northeast of the city center. She was likely to be on-scene before him.

She dragged a clean pantsuit out of the wardrobe, grabbed her toothbrush and toothpaste, and took them all downstairs with her. She snapped the kettle on and dressed quickly while it boiled. She threw instant-coffee granules into her thermos mug and dumped boiling water and milk on top, then went to grab her shoes. She’d left her socks upstairs, she realized. It wasn’t the weather to do without, and she ran up to grab the thickest pair she could find. She was fully dressed and standing at the front door by 6:53, her blond hair pulled back into an untidy bun that would just have to do.

She paused with her hand on the bolt. She needed a moment to prepare, mentally, for the few steps to her car. Climbing into the vehicle quickly meant having her keys ready. Her bag looped over her shoulder just right. Her movements planned out.

She was pretty sure there would be nobody out there today. Who would want to hang around her house before dawn on a freezing morning? But she was going to make sure anyway.

She’d developed a habit of pulling the door shut as she moved off the doorstep, letting the Yale lock click into place, and it was so practiced that she didn’t even need to think about it today. She checked right and left as she approached the car, too, which she had reversed up as close to the porch as possible. There were no footsteps in the snow, she saw. No sign of anyone close by.

It took five paces to get to the driver’s door, and she had the car unlocked on pace number two. By pace number three she was pretty sure she was alone, but she kept moving at speed anyway. She didn’t pause until she was inside the car with the doors locked and the engine running.

She spent a moment, after that, doing nothing more than breathing in and out. She hated that she felt like this. She hated, too, that it was almost worse when he wasn’t waiting in the shadows than when he was.

DCI Jonah Sheens was buzzing with curiosity as he pulled his Mondeo into Saints Close. He’d been sad to climb out of Jojo Magos’s warm bed and to miss their one lazy morning together. He also felt a little grubby in yesterday’s shirt and trousers. But overriding these considerations was keen interest. An unidentified man at a residential house. A death. All the questions that went with it.

Saints Close turned out to be a meandering little group of ’60s houses off Belmont Road. Chunky detached buildings with decent-sized gardens out at the front. A place of solid salaries. But nothing particularly flashy. No million-pound piles. Volkswagens rather than Audis parked in driveways.

Jonah noticed that someone had added an apostrophe after the final s of “Saints” on the street sign, using some kind of sticker that was much larger than the rest of the typeface. He smiled slightly to himself. That kind of a street, then.

He hitched the car half up onto the sidewalk behind the scientific-support van. Three emergency vehicles in total, and Hanson’s little Nissan parked farther up. The cluster stood out, the only vehicles that were clean and free of snow. He was glad to shrug on his thick padded jacket and pull on ski gloves before he climbed out.

The garden to Number 11 was bounded by trees. Snowy firs standing between leafless sycamore branches. At the front an overgrown hedge screened the ground floor from view. It looked like it would be gloomy in that front garden, even in daylight.

Approaching the gate, he struggled to make out much beyond the white forms of the forensics team and a nylon screen being manhandled into place halfway down the garden.

One of the overalled figures moved to meet him. Linda McCullough, forensic scientist for Southampton and the New Forest, and undisputed lead of the scene-of-crime team. He took a step forward onto the clear plastic sheeting that had been rolled out from the front door up to the pavement.

“We’ve only just arrived,” McCullough told him, lowering her mask to speak to him. “Victim’s a young white male. The homeowner called it in. She told us she’d found him just before six-thirty.”

Jonah saw that one of the figures was spooling a cable out of the front door, unwinding it toward a pair of wide-based portable floodlights. He couldn’t see much within the house. A lighted hallway. Stairs to one side.

“Anyone else in the house?”

“Your constable’s here, but nobody else.”

The floodlights burst into brilliant life, dousing the garden with light. He squinted against the sudden brightness, and then followed McCullough behind the screen they’d now erected on the grass.

A young man lay a few feet behind it, his white dragon-motif T-shirt dominated by a large crimson bloom. As McCullough involved herself in angling the lights, Jonah crouched down over the body. He gazed first at the colorless face. A chiseled, high-cheekboned face. It had been handsome, he thought, up until today.

He took in the powerful shoulders and lean abdomen and a knife that lay close by, sticky with drying blood. Then his gaze traveled to the stained snow beneath the body.

“Not much blood,” he muttered.

McCullough gave an audible sigh as she lifted her mask back into place. “Sheens . . .”

“All right, I know.” He grinned at her and straightened up. “You do your job, and I’ll go and make the coffee.”

Ben Lightman arrived after that, only just returned from annual leave and looking as perfectly unruffled and movie-star handsome as ever. He clearly wasn’t dressed warmly enough to hang around outside but showed no signs of concern. It was as if the cold were something that affected other people.

He listened in stillness to the sparse information they had so far.

“I’d like witness statements from the surrounding houses,” Jonah finished up. “You can have my coat and gloves. Juliette’s with the homeowner so I’ll go and check in with her.”

Lightman nodded, taking the offered coat and beginning to put it on. “And presumably Domnall can come with me once he’s here?”

Of the four of them, Domnall O’Malley actually lived the closest to the crime scene. But O’Malley had never been a man to hurry unless he had no other choice, and despite a previous career in the military he managed his life in a haphazard, seat-of-his-pants fashion. Jonah was well used to it and was happy to let him do things his way.

Jonah headed inside and found Hanson in a large, beautifully decorated sitting room just off the hall. She’d managed to dress herself formally in a navy suit and cream shirt, and looked respectable, if slightly thrown together.

The woman who sat near her looked unprepared for any of this. She was somewhere in her early thirties and was swathed in a thick dressing gown over pajamas. Her feet were bare, and she had the remains of makeup around her eyes. Her very dark hair looked damp and had been scraped back into an uneven ponytail. She shivered continuously, most likely because there was a dead man in her front garden, but just possibly also because of the blast of arctic air that was making its way through the two open doors.

“Ah,” Hanson said, giving him a smile. “This is my DCI. This is Louise Reakes, sir. She found the body and called us in.”

Hanson’s hint of a Birmingham accent had stepped up this morning, and Jonah guessed it was deliberate. An unthreatening regional burr was reassuring.

“Let’s get this door closed,” Jonah said, pushing the sitting-room door shut. “We can at least stop the cold getting in here.” And then, as he pulled up an upright chair opposite the woman on the sofa, he added, “I’m so sorry for all of this.”

“It’s all right,” Louise said hoarsely. “Can’t be helped. It’s not like you put him there. . . .” Her mouth twisted slightly in wry humor. For a moment she looked like she might be about to apologize, and then she dropped her gaze to her hands.

“Did you know the victim?” Jonah asked, gently.

Louise shook her head. “No. I’ve never seen him before in my life. I’m sorry.”

Gytha Lodge is the author of She Lies in Wait, Watching from the Dark, and Lie Beside Me. She studied English at Cambridge University and received an MA in creative writing from the University of East Anglia. 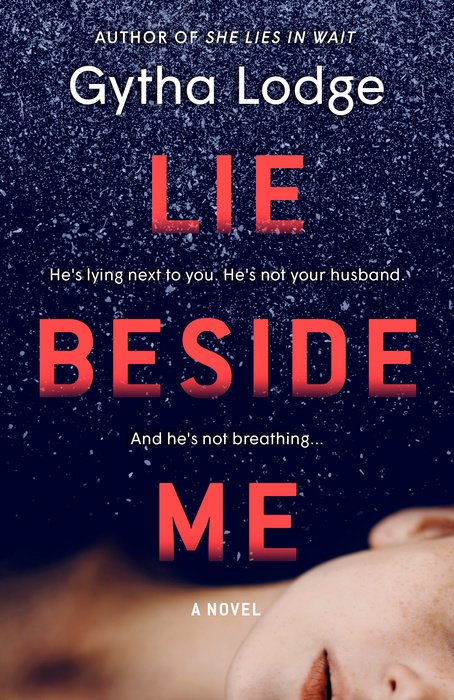