“The residents and their buoyant dreams are documented, celebrated, honored. I bow to this writer in gratitude.”—Sandra Cisneros

Before being torn down in 2007, the Stateway Gardens public housing projects on Chicago’s South Side were ridden with deprivation and crime. But for some, like Tracy, the shy, intelligent young boy at the center of this enthralling collection of linked stories, they are simply home. Set in the mid-1980s and taking readers up to the point of the destruction of the infamous Cabrini-Green housing projects—a set of buildings similar in design to Stateway Gardens to the south—this collection gives an intimate look at the hopes, dreams, failures, and fortunes of a group of people growing up with the deck always stacked against them. Through Jasmon Drain’s sensitive and often playful prose, we see another side of what we have come to know as “the projects.”

Stateway’s Garden is a coming-of-age story told in short stories, through the lens of a childhood made rough by the crush of poverty and violence, with the crack epidemic a looming specter ahead. And yet, through the experiences and ambitions of Tracy and other young characters, Drain reveals a vibrant community that creates its own ecosystem, all set in a series of massive, seemingly soulless concrete buildings. Not shying away from the darkness of life for his characters, Drain shows the full complexity of their human experiences.

Exquisitely detailed and novelistic in scope, this collection of stories will linger in your mind long after you have turned the final page.

An excerpt from Stateway's Garden

Found on Ogden and Central Park

They told me that I was the smart kid, very smart from what I understood, able to walk sturdily around our apartment when I was just over nine months old. The family, in jest, said I used those legs to observe and learn anything I could. Stories were that I held a fork the moment my hand muscles were strong enough to balance it; I used the bathroom while standing, barely capable of seeing over the toilet, and whenever I was quiet, which was often, I was attempting to learn something new. I believed only a little of this. However, my mother used those smarts of mine to her advantage every instance she could. Because although I was younger, I did the older-boy chores—the ones my brother, Jacob, should’ve done. As a reward for his complaining about everything, she left him home alone for hours some of the times she went to work. Said she could only take so much of his mouth.

She worked at the corner store on Ogden Avenue and Central Park, the West Side of Chicago, at least an hour bus ride from our South Side Stateway Gardens projects. At first, Jacob was the one who always went to work with her ’cause he was supposed to be the grown one and I’d have to be with Mother’s friend’s niece Solane. Every day he came home and talked constantly about how uncomfortable being at work with our mother made him feel. Said he saw stupid people doing stupid-people things while trying to teach him stupider lessons. Even at nine or ten, and me six, he sounded younger when he talked. His stories were hardly elaborate, nothing close to the exaggeration that eventually floated in his language once we were older. But Jacob’s lack of detail about the store made me eager to travel to work with my mother on that Western Avenue bus. He just had to be hiding something good.

“Put your jacket on,” she said to him. “We’re heading out in a minute.”

“I don’t wanna go, don’t make me, I don’t like it there,” he replied. My brother always spoke in sentences that made it seem like his brain and tongue were fighting each other for leadership.

“We go through this every time. You’re going with me.”

“ ’Cause you’re my young and pretty son,” she replied with a small smile. “You make me look better.”

Jacob folded his arms as he sat on the double-mattressed bed in our room. “It’s dumb, I don’t never ever have fun there.”

“Life isn’t about fun. It’s about money.” Mother’s voice was so potent whenever she said the word money that it could have bruised your arm. With the force she used to snatch him from the bed, the bruise would be there anyways. “I didn’t ask for your input,” she continued. “Put the damned jacket on.”

“I want to go,” I interjected.

“I didn’t ask you if you wanted to go.” Her body moved with such swiftness in my direction that I thought she was going to grab me as well. “Go over there and sit down, Tracy.”

“Stop talking to me.” She pointed her finger to a seat.

“I promise I will be good.”

She lifted her arms into the air, rolling the sleeves of her shirt to the elbow. I noticed the light skin on Jacob’s arm turning red from where Mother had held him. She always made certain to never strike anywhere near his face, didn’t want to leave a mark. Mother wheezed after removing her hand from his arm, and huffed like a big-bellied crocodile finishing a water buffalo.

True, I was my mother’s smart child, but Jacob was the handsome one with the precious button nose and eyelashes that flapped like dove wings. He had one of those faces that made you feel guilty for making him frown in even the slightest way.

“I’m not going anywhere, you didn’t have to hit me.” Jacob folded his arms again.

Even though he was so young, the deepness of his voice made you believe puberty occurred during his infancy. The only things he inherited from our mother were her temper and height. He stood against the bed while she stared him down, right fist balled as if he planned to swing without compromise, and said again, “I’m not going.”

“Maybe you could take me, Mother?” I said again.

She turned to me slowly, like her body was on an out-of-practice swivel. Judging my mother’s figure you would never have assumed she had kids. Neither her shoulders nor hips were wide at that time, and she was nothing close to physically imposing. Yet with those teeth clenched, both Jacob and I knew fear.

“You’re too young to go, Tracy,” she said. When she turned to me, her eyes were no longer bulging and the frown had softened. Her hands, which had been shaking, steadied and began to relax. “You’re not ready.”

“I could help you count money or something.”

“I just think it’s too early for you to be going to that store with me.”

When Mother turned to look at Jacob, red bruise on his arm swelling by the second, she knew there was no choice: Take me or go alone. Mother hated to be alone, hated it more than anything, if even for a brief moment. She wouldn’t eat by herself, slept with three to five pillows stacked next to her, and sometimes made Jacob or me stand right beside her in the bathroom whether she was brushing her teeth or sitting on the toilet. Going to work was no different.

I think that was one of the few times she favored my dirty skin and much wider nose over Jacob’s.

“Maybe you can do something useful while you’re there,” she said after pausing for a while. “You are my smart child.” And she began introducing me as just that.

We turned the corner on Ogden Avenue that morning, walking with a holiday pace. Mother never took being on time to work seriously. In her opinion, nothing was more important than the way she looked. That was her moneymaker. For example, if she was to be at work at ten in the morning, she began prepping at six-thirty. She spent hours using Lynda Carter’s Maybelline mascara, hoping it got her eyelashes close to Jacob’s; she applied an even coat of brown lipstick that ironically helped her cheekbones jump; she used a brush resembling something for painting a wall to apply powder. And as we walked past parked cars, sometimes twelve or so on a West Side block, she employed windows on the passenger sides of fancier vehicles to check the shine of her large forehead and make sure there were no smears of blush on her cheeks. Mother had one of those open faces, hair always pulled back revealing her features; it was the kind of face that helped plastic earrings compete with diamonds. I guess the reaction she garnered from West Side of Chicago men made it all worth it. She continued to stroll like the thoroughbred horse she was: legs tight, white-and-blue skirt tighter, and pointing her nose in the air.

On Ogden Avenue, there were hardly any cars flying down the street and the traffic lights didn’t even work. There were numerous brown and green dumpsters on the curbs, most of which were overflowing and crowded with flies. The street smelled like our building’s incinerator. None of this seemed to bother my mother. She had to have had invisible nose and earplugs. Because the men that we passed walking down the street, some of which were missing at least one tooth and held accessory-like bottles of liquor in their hands, looked her up and down in the way I would a mag-wheeled Huffy. They said things like “What’s up, bricks?” and “Hey, sexy momma” and “I’d love to get with that.”

“Don’t grow up and be like them,” she said to me without turning her head. “No woman wants a man with no money and nothing in his hand but a drink.”

“But what if I don’t have any money?” I replied. 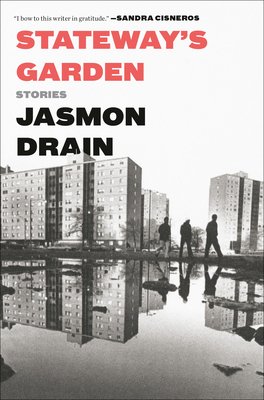