“Riveting . . . full of imagination and power.”—Caroline Kepnes, author of You and Providence

When Alexandra Witt joins the faculty at Stonebridge Academy, she’s hoping to put a painful past behind her. Then one of her creative writing assignments generates some disturbing responses from students. Before long, Alex is immersed in an investigation of the students atop the school’s social hierarchy—and their connection to something called the Darkroom. She soon inspires the girls who’ve started to question the school’s “boys will be boys” attitude and incites a resistance. But just as the movement is gaining momentum, Alex attracts the attention of an unknown enemy who knows a little too much about her—and what brought her to Stonebridge in the first place.

Meanwhile, Gemma, a defiant senior, has been plotting her attack for years, waiting for the right moment. Shy loner Norman hates his role in the Darkroom, but can’t find the courage to fight back until he makes an unlikely alliance. And then there’s Finn Ford, an English teacher with a shady reputation, who keeps one eye on his literary ambitions and one on Ms. Witt. As the school’s secrets begin to trickle out, a boys-versus-girls skirmish turns into an all-out war, with deeply personal—and potentially fatal—consequences for everyone involved.

Lisa Lutz’s blistering, timely tale of revenge and disruption shows us what can happen when silence wins out over decency for too long—and why the scariest threat of all might be the idea that sooner or later, girls will be girls.

Praise for The Swallows

“The Swallows is fast-moving, darkly humorous and at times shockingly vicious. The battle of the sexes within its pages couldn’t be more compelling. . . . Lutz delivers a frantic, morbidly funny story.”—BookPage

“A decade before the #MeToo movement kicks off in full force, women are coming for the patriarchy in this big ol’ novel, ripe with idiosyncratic characterization and memorable scenes.”—Refinery29

An excerpt from The Swallows

Some teachers have a calling. I’m not one of them.

I don’t hate teaching. I don’t love it either. That’s also my general stance on adolescents. I understand that one day they’ll rule the world and we’ll all have to live with the consequences. But there’s only so much I’m willing to do to mitigate that outcome. You’ll never catch me leaping atop my desk, quoting Browning, Shakespeare, or Jay-Z. I don’t offer my students sage advice or hard-won wisdom. I don’t dive into the weeds of their personal lives, parsing the muck of their hormone-addled brains. And I sure as hell never learned as much from them as they did from me.

It’s just a job, like any other. It has a litany of downsides, starting with money and ending with money, and a host of other drawbacks in between. There are a few perks. I like having summers off; I like winter and spring breaks; I like not having a boss breathing over my shoulder; I like books and talking about books and occasionally meeting a student who makes me see the world sideways. But I don’t get attached. I don’t get involved. That was the plan, at least.

I came to Stonebridge Academy because it was the only place where I was sure of a no-questions-asked job offer. The dean of students, Gregory Stinson, is an old family friend. I don’t know if he offered me the job knowing everything or nothing. Back then, Greg never spoke of unpleasant things.

Why I wanted to give it another go is beyond me. It’s not like I thought of teaching as my life’s work. I doubt I’ll ever have that. Maybe I just wanted to wrap up my career in education with a memory that didn’t make my skin crawl.

It was July 2009 when I first laid eyes on the campus. During my preliminary visit, Greg and I hammered out my contract in his musty old office, which overlooked fifty acres of dense woods. Under the thick brush of summer, I couldn’t see the veins and arteries of the interconnected hiking and cross-country-skiing trails that Stonebridge boasted of so proudly in its brochure. It seemed like too much space for four hundred or so high school students. Despite the classic prep school architecture—cathedral buildings, everything stone—I had heard rumors about the lax academic environment. Warren Prep kids had called Stonebridge students “Stoners.” I considered that detail its most attractive quality.

Greg was sure I was perfect for the libertarian style of his school, and his certainty compensated for my hesitation. We discussed my course schedule for the new year. I would teach three English literature classes and one American lit.

After that, Greg took me on a brief tour of the campus. His office and several classrooms were housed in an imposing stone structure that had no formal name. Later, I learned that the students called it Headquarters. It was the only building on campus without a literary appellation. You know the game where you take your first pet’s name and add the street you grew up on and, voilà, there’s your porn name? I think Stonebridge used a similar formula for naming their buildings and recreational grounds. Take the last name of a British (or occasionally Irish) poet or author and add House, Manor, Hall, Field, Commons, or Square to it. The center of campus was Fleming Square; students ate in Dahl Dining Hall; Tolkien Library and Samuel Beckett Gymnasium flanked Fielding Field.

Across from Headquarters, adjacent to Beckett Gym, was the headliner of the tour: the Oscar Wilde Bathhouse. We passed through double doors with a sign that read no students allowed, no exceptions. The marble compound, which housed a whirlpool tub, sauna, and steam showers, was apparently an extravagant gift from a former student.

“If this doesn’t seal the deal, I don’t know what will,” Greg said.

I had a feeling that Greg was using the bathhouse as camouflage. I suggested he show me faculty housing.

In silence, Greg led me across the square to a four-story brick building. There was a heavy drizzle outside, which made everything look like it was on the other side of a cheap, transparent shower curtain. We strolled past Dickens House, the boys’ dormitory. And, yes, they called it Dick House. Next to Dickens was a similar four-story brick structure. The sign above the door read woolf hall.

“Yes. After you,” Greg said, opening the thick paneled door.

“No thanks,” I said, taking a step back.

There was no point in entering the building. I would not live among them. That was a deal breaker, I explained. I thanked Greg for the tour and told him I had to be on my way. He told me I was being rash. I had driven two hours; the least I could do was take some time to think it over.

Greg gave me a hand-rendered map of the school grounds, which I think he drew himself. Either way, it was not beholden to any concept of scale or structural accuracy.

Greg walked me to the edge of Fielding Field and suggested I take some time before I made a final decision. I come back to that moment again and again. So many lives would have taken a different course had I not gone for a walk in the woods. That walk changed everything

From Fleming Square I followed George Eliot Trail past Evelyn Waugh Way, and continued for about a quarter mile, until I came upon a tiny stone cottage. It was at least ten minutes walk from Fleming Square and, at that time of year, surrounded by vibrant wildflowers. Cedar, pine, and maple trees towered over everything. A pond nearby rippled under the drizzle. It sounded so much better than that machine I’d bought to help me sleep.

The perfection of it all I now see as a trick, not of nature but of my own mind. I needed a sign, even a wink, from the universe to believe that I was making the right decision. I ignored the fact that the foundation was cracked and some of those stones resembled Jenga pieces. When I looked for the cottage on the map, it wasn’t there.

For someone looking for a place to hide, that was as good a sign as any.

I returned to Greg’s office and told him I would take the job if I could live in the cabin with no name. He said the place wasn’t habitable. He mentioned the absence of a shower. I reminded him of the bathhouse. He continued to resist. I told him those were my terms, take it or leave it. Greg reluctantly agreed.

I returned to campus on Labor Day, after dark. Classes were to begin the next morning. I picked up the key to the cottage from the guard at the security gate and followed the blue ink on my annotated map. A muddy fire lane took me just shy of twenty yards from my new front door.

Inside the cabin, I stood on the cold stone floor and wondered what the hell I was thinking. I was struck by a fresh memory of the perils of dorm life and forced myself to feel at home. I wiped down the cabinets above the kitchen sink, which contained a sparse collection of dishware and an unopened bottle of bourbon. I pulled the bottle from the shelf and noticed a small square of folded paper attached to the neck. I unfolded the paper and read the note written in small block letters.

welcome to stonebridge. be careful.

I sat outside on a rickety chair and considered the message. Was it a warning or just a piece of advice? I drank half the bottle as I tried to decide. Then I crawled into bed and fell asleep.

Lisa Lutz is the New York Times bestselling, Alex Award–winning author of the Spellman Files series, as well as the novels Heads You Lose (with David Hayward), How to Start a Fire, and The Passenger. She has also written for film and TV, including HBO’s The Deuce. She lives part-time in New York’s Hudson Valley. 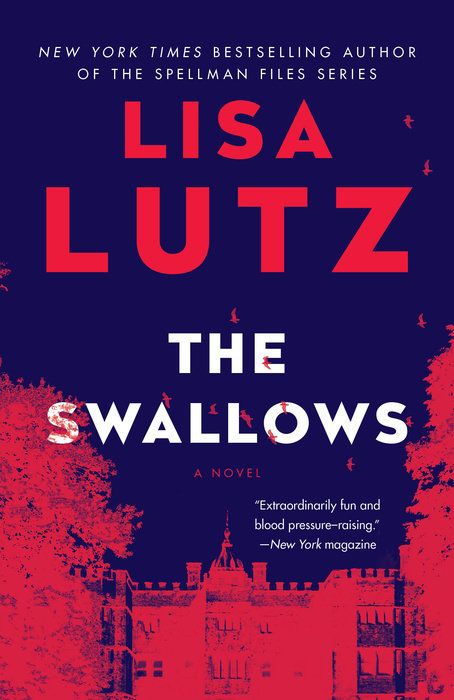