GOOD MORNING AMERICA BUZZ PICK • A woman who’s used to going solo discovers that there’s one relationship she can’t run away from in this “hilarious, electric” (The New York Times) novel, a probing examination of the complexities of family, queerness, race, and community

When she was twenty-six and broke, Skye didn’t think twice before selling her eggs and happily pocketing the cash. Now approaching forty, Skye still moves through life entirely—and unrepentantly—on her own terms, living out of a suitcase and avoiding all manner of serious relationships. Maybe her junior high classmates weren’t wrong when they voted her “Most Likely to Be Single” instead of “Most Ride-or-Die Homie,” but at least she’s always been free to do as she pleases.

Then a twelve-year-old girl tracks Skye down during one of her brief visits to her hometown of Philadelphia and informs Skye that she’s “her egg.” Skye’s life is thrown into sharp relief and she decides that it might be time to actually try to have a meaningful relationship with another human being. Spoiler alert: It’s not easy.

Things get even more complicated when Skye realizes that the woman she tried and failed to pick up the other day is the girl’s aunt, and now it’s awkward. All the while, her brother is trying to get in touch, her mother is being bewilderingly kind, and the West Philly pool halls and hoagie shops of her youth have been replaced by hipster cafés.

With its endearingly prickly narrator and a cast of characters willing to both challenge her and catch her when she falls, this novel is a clever, moving portrait of a woman and the relationships she thought she could live without.

An excerpt from Skye Falling

“You still live there?”

“I left the day I turned eighteen. But I still stay in West Philly when I’m in town. My friend owns a bed-and-breakfast not that far from here.”

She’s watching me intently now and I’m sure she’s trying to read me. I don’t like it. Most people can’t get a read on me but I worry that if this kid really wanted to, she could, like a genetic knowing, passed to her through my DNA or some shit. Then she says, “Why’d you do it, though? Just for money or, like, other reasons, too?”

I can see the kid is getting at something. I guess this is why she came: to know the reasons she exists. That feels heavy and I wish this conversation wasn’t happening.

“How’d you find me?” I ask her, mostly to deflect.

“You searched ‘where is my egg donor’ and that led you right to me? Wow, technology really is on some next-level shit.”

She laughs a little, and I like the sound of it more than I could have anticipated. “No, not like that,” she says. “I saw your name on these papers. I guess they were my mom’s. Then I looked you up on Face­book and saw you might be at that art thing today.”

“So, why’d you give your eggs to some girl you only knew at camp?”

“Sorry,” she says. “I’m a lot sometimes. People say that about me.”

“It was a long time ago,” I tell her. “I don’t really remember all the reasons. But probably some part of my twenty-six-year-old self thought it would be cool to help make a kid I could maybe someday meet but not have to, you know, support financially. Speaking of which, you know we’re going dutch here, right?”

She laughs again. The sound gets up under my ribs in this weird way, like a vibration. And then, out of nowhere, this thought occurs to me: I have never seen such a perfect human being.

“Excuse me for a second,” I say. “I need to, um, vomit.” I get up and walk toward the bathroom.
When I’m out of sight of the kid, I change course and head straight for the exit. I stop. The stepsister is right there by the door. Shit. I head for the bathroom instead.

I’m halfway out the window when the door opens and the kid enters. She sees me making a break for it and now she looks horrified. Not curious. Not amused. Horrified. I knew we’d get there eventually.

“No!” I look down at myself, one leg already out the window, the other foot dangling above the sink.
“Well, yes.”

Trouble is, I don’t really know why. Not entirely. I mean, obvi­ously I can’t handle this. But going out a window to escape my brother is one thing. Going out a window to ditch a twelve-year-old girl seems extreme even to me. “Look. You seem like a nice kid. But I’m not really . . . you know . . . motherly.”

I’m not sure I believe her. People can be tricky when they’re try­ing to get something from you, especially if that something is love.

The kid shakes her head. “Fine. Whatever. Just go.”

I feel shame blossoming in my chest and I don’t like it. Maybe it would be better if I came back inside. Maybe the kid really isn’t look­ing for another mother. I mean, how many mothers does one girl need in a lifetime? I have one and, frankly, it’s too many! And even if she is . . . well . . . maybe I could be that. I mean, I might not make the best mother, but I probably wouldn’t be the worst. I could maybe pull off second mom in a pinch. I look at the kid. Take a deep breath. And climb a little farther out the window.

Exasperated, the kid turns and storms out of the bathroom.

This is the part where I’m supposed to go after her. But I don’t. I just sit there, half in, half out of the window, until some old lady comes in to pee, sees me, and frowns, all judgy, like she thinks I’m trying to dine and dash or some shit.

She smirks like, if you say so and goes into a stall.

When I get back to our table, the kid and her stepsister are gone. The word “dutch” has been scrawled on the check and there’s cash for one hot dog beside it.

It’s mid-afternoon and even warmer and sunnier than it was this morning, the sky a stunningly clear, almost glassy, blue. I walk the eight blocks back to the bed-and-breakfast because I think the air will help clear my head. It sorta does and it sorta doesn’t. I’m less queasy, but the last couple of hours feel like a weird dream.

When I get back to my room, I’m thrilled to find it clean and com­pletely free of naked strangers. I put the do not disturb sign on the door, strip down to my underwear, then go into the bathroom and throw up one more time for good measure. My phone buzzes. It’s Viva. I ignore it. I get in bed and close my eyes. My phone buzzes again. It’s my brother. I put it on silent and pull the covers up over my head. At least the kid doesn’t have my number.

Mia McKenzie is the award-winning author of The Summer We Got Free and the creator of Black Girl Dangerous Media, an independent media and education project that centers queer Black women and girls. She lives with her parenting partner and two children in the Happy Valley of Western Massachusetts. 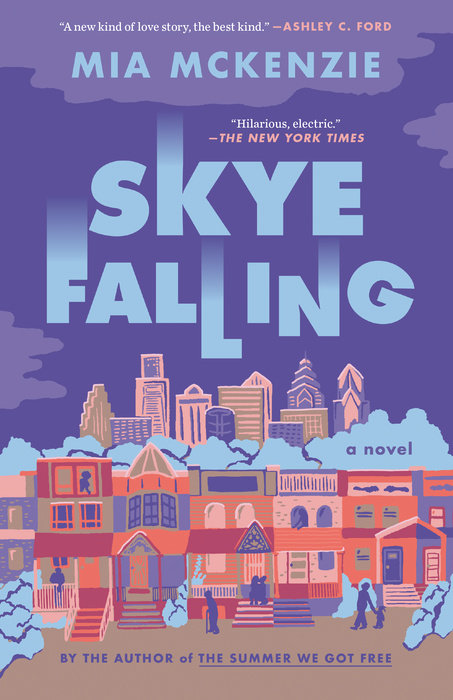