Sometimes the walls we build to save ourselves have to come tumbling down.

For the last ten years, Huey has built his life around his sobriety. If that means he doesn’t give a damn about finding love or companionship for himself, well, it’s probably better that way. After all, the last thing he wants is to hurt anyone else. Until Felix Rainey walks into his bar, fresh-faced, unbearably sweet—and, for some reason Huey can’t fathom, interested in him.

As the eldest of five kids, Felix Rainey spent his childhood cooking dinner, checking homework, and working after-school jobs. Now in his twenties, he’s still scrambling to make ends meet and wondering what the hell he’s doing with his life. When he meets Huey, he’s intimidated . . . and enamored. Huey’s strong and confident, he owns his own business—hell, he’s friends with rock stars. What could he ever see in Felix?

As Huey and Felix get closer, the spark catches and soon they can’t get enough of each other. But Huey’s worked hard to avoid intimacy, and Felix threatens his carefully constructed defenses. Huey realizes he needs to change if he wants to truly put his past behind him—and build a future with Felix.

An excerpt from Raze

In the corner of my bar, a cheerfully drunk man sang loudly and out of tune. My temples throbbed in rebellion and the man’s friends cheered.

How the hell had I let Johi talk me into this?

Johi passed me a towel, took one look at my face, and rolled her eyes.

“Come on, it’s not that bad,” she said. “You just tune it out like you tune out all the stupid conversations people have in here every night.”

A month ago, she’d caught me in a distracted moment and given me the hard sell: “Being a random dive bar that happens to be in Brooklyn might’ve been enough to stay in business in 2003 but at this point you need a draw. Karaoke is fun, inexpensive, and people have to drink to force their carcasses on stage to make a spectacle of themselves, so it’s good for business.”

She’d emailed me links to the research she’d done and promised she’d be in charge of it, and I’d grudgingly caved. Everything she said made sense, and the bar could certainly use an income boost. We already had a small raised platform in the corner where live bands once performed.

Johi had done everything, just as she’d said she would. She’d even gotten her roommate Derricka to emcee it for our first time out. And apparently she’d been right that the activity would draw a crowd.

Now, though, I realized she was trying hard to keep a straight face. In fact, I thought maybe she’d been trying to hide a smile all night.

“Did you just win a bet with someone that you could convince me to do a karaoke night?”

She gasped, as if mortally offended. “You wound me, sir!” Then she grinned.

“Dude, no. It wasn’t a bet—though now I realize I could’ve totally made some money off him, damn it. No, I just, uh. Don’t laugh but I seriously love karaoke. Like, it will make me a hundred percent happier once a week to get to watch it. So I’m pretty pleased with the upgrade I’ve just given my life, that’s all.”

I took in her bright smile as the tinny opening riff for the next song began in the background.

“Aw, Huey, it’s great. It’s fun and it feels like a treat when people pick songs you like. Every now and then you get legitimately great singers. But even when people are bad, they’ve chosen to let the world see that they’re bad in the service of having fun. It’s brave. Plus I like to look at people and try to guess what they’re gonna sing.”

I narrowed my eyes and shook my head.

“Well, consider yourself scheduled for Tuesday nights for the rest of your natural life.”

She gave me two thumbs up, made them into finger guns she shot at me, and winked, then moved off to help the customers that had just walked in.

In the karaoke corner, a girl sang a ballad that I vaguely remembered being on the radio when I was in high school. It felt like a hundred years ago. She had a decent voice and was clearly nervous. As the song bled to silence, she covered her mouth with her hand and her friends exploded in applause. I guessed Johi would say she was being brave.
I wouldn’t know.

Derricka enthusiastically called up the next victims.

They wound through the crowd, the woman tugging the man by the hand. She moved easily and seemed confident, her short dark hair bleached in the front and her shoulders set. The guy trailing behind her looked slightly less enthusiastic, and when she grinned at him he rolled his eyes before grinning back.

He was small and slender, with intense dark eyes and a dreamy smile. His hair fell to his chin in messy brown waves that he shoved back distractedly.

I assumed they were a couple, but then the woman stuck her tongue out at the guy in a way that said friends or siblings.

The song projected on the screen behind them and I snorted a laugh. “Ten Hour Fall,” by Riven.

Theo Decker, the former lead singer of Riven, was my best friend Caleb Blake Whitman’s partner. When I’d complained to Theo and Whitman at dinner one night about Johi making me have a karaoke night, Theo had grinned and said I should do all Riven karaoke.

He’d been joking, of course, and I’d left the song choices up to Johi—with a firm ban on They Die Roses, The Elsewheres, Danny MacDoyle, and post-1997 Marble Jubilee—but I looked up whether there even were Riven songs available, mostly so I could potentially torture Theo by sending him videos of people butchering his songs. There were only two songs available, and I told Johi to get them both. I’d forgotten about it until now.

When the first chord played and Theo’s lyrics streaked across the screen, I didn’t look away. The man holding the microphone shoved his hair out of his face, and shrugged self-consciously, but when he began to sing, he was good. Really good.

The song was rangy, full of sustained notes that slid up and down the scale. The man loosened up as he sang, grinning, and the audience watched in surprised delight as he killed the song. He sounded nothing like Theo, really, but his voice had the same elastic ability to resonate at the low notes and tinkle at the high ones.

The woman sang the second verse and she was great too. They sang the chorus in harmony and I fumbled to open a video on my phone. I got the guy singing the second verse before someone approached for a drink. Once I’d served him, I shot a text off to Whitman and Theo: Someone’s ready to take your old job, Decker. And I attached the video clip.

The crowd applauded enthusiastically for the duo as they sat back down, and my phone buzzed with a text.

Whitman wrote: Wow he’s pretty good. Got nothing on you though baby.

The persistent hollow ache in my belly was a hunger for something unnamable and Whitman’s casual endearment had stirred it ravenous. I pressed the heel of my hand to my stomach like I could feed it from the outside. It never worked, just left me with a tender bruise under my ribs.

I had watched Whit fall in love with Theo and seen a version of my friend I’d never known: someone softer, brighter, stronger, and with far more to lose.

I’d been suspicious of Theo at first. How could I not be? When your oldest friend and sponsee who left the music business because he felt he couldn’t stay sober while involved in it starts dating a rock star, it’s hard to see that ending well. Letting go enough to love could bring with it the dangerous kind of abandon.

When I first met Theo, I was prepared to give him a stern talking to. But when Whitman went to the bathroom Theo turned big gray-blue eyes on me and thanked me for taking care of Caleb all these years. He promised me that he’d do everything he could to take care of him too. I didn’t like to admit it, but I’d been a bit of a sucker for him ever since.

Then a minute later: Riven is looking for a new lead singer after that uh disaster of a guy they hired last year. Huey you should tell the guy you’ll pass his info along and give it to me!?

Right because when guys who look like me and work behind a bar tell young men they could make them a star they should definitely believe them and give out personal info. No dice.

Whitman sent back a crying laughing emoji and a picture of Theo’s face set in a cringing sulk.

By the time I looked up to serve the next customer, the man was gone.

Roan Parrish lives in Philadelphia, where she is gradually attempting to write love stories in every genre. When not writing, she can usually be found cutting her friends’ hair, meandering through whatever city she’s in while listening to torch songs and melodic death metal, or cooking overly elaborate meals. She loves bonfires, winter beaches, minor chord harmonies, and self-tattooing. One time she may or may not have baked a six-layer chocolate cake and then thrown it out the window in a fit of pique. 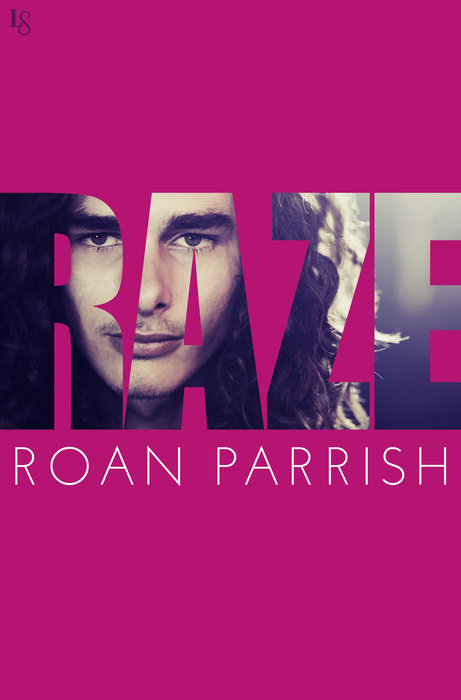