#1 NEW YORK TIMES BESTSELLER • From the author of Small Great Things and The Book of Two Ways comes “a powerfully evocative story of resilience and the triumph of the human spirit” (Taylor Jenkins Reid, author of The Seven Husbands of Evelyn Hugo and Daisy Jones & The Six)

Diana O’Toole is perfectly on track. She will be married by thirty, done having kids by thirty-five, and move out to the New York City suburbs, all while climbing the professional ladder in the cutthroat art auction world. She’s an associate specialist at Sotheby’s now, but her boss has hinted at a promotion if she can close a deal with a high-profile client. She’s not engaged just yet, but she knows her boyfriend, Finn, a surgical resident, is about to propose on their romantic getaway to the Galápagos—days before her thirtieth birthday. Right on time.

But then a virus that felt worlds away has appeared in the city, and on the eve of their departure, Finn breaks the news: It’s all hands on deck at the hospital. He has to stay behind. You should still go, he assures her, since it would be a shame for all of their nonrefundable trip to go to waste. And so, reluctantly, she goes.

Almost immediately, Diana’s dream vacation goes awry. Her luggage is lost, the Wi-Fi is nearly nonexistent, and the hotel they’d booked is shut down due to the pandemic. In fact, the whole island is now under quarantine, and she is stranded until the borders reopen. Completely isolated, she must venture beyond her comfort zone. Slowly, she carves out a connection with a local family when a teenager with a secret opens up to Diana, despite her father’s suspicion of outsiders.

In the Galápagos Islands, where Darwin’s theory of evolution by natural selection was formed, Diana finds herself examining her relationships, her choices, and herself—and wondering if when she goes home, she too will have evolved into someone completely different.

This edition contains a short story, discussion questions, and an excerpt from Jodi Picoult’s next novel.

An excerpt from Wish You Were Here

When I was six years old, I painted a corner of the sky. My father was working as a conservator, one of a handful restoring the zodiac ceiling on the main hall of Grand Central Terminal—an aqua sky strung with shimmering constellations. It was late, way past my bedtime, but my father took me to work because my mother—as usual—was not home.

He helped me carefully climb the scaffolding, where I watched him working on a cleaned patch of the turquoise paint. I looked at the stars representing the smear of the Milky Way, the golden wings of Pegasus, Orion’s raised club, the twisted fish of Pisces. The original mural had been painted in 1913, my father told me. Roof leaks damaged the plaster, and in 1944, it had been replicated on panels that were attached to the arched ceiling. The original plan had been to remove the boards for restoration, but they contained asbestos, and so the conservators left them in place, and went to work with cotton swabs and cleaning solution, erasing decades of pollutants.

They uncovered history. Signatures and inside jokes and notes left behind by the original artists were revealed, tucked in among the constellations. There were dates commemorating weddings, and the end of World War II. There were names of soldiers. The birth of twins was recorded near Gemini.

An error had been made by the original artists, so that the painted zodiac was reversed from the way it would appear in the night sky. Instead of correcting it, though, my father was diligently reinforcing the error. That night, he was working on a small square of space, gilding stars. He had already painted over the tiny yellow dots with adhesive. He covered these with a piece of gold leaf, light as breath. Then he turned to me. “Diana,” he said, holding out his hand, and I climbed up in front of him, caged by the safety of his body. He handed me a brush to sweep over the foil, fixing it in place. He showed me how to gently rub at it with my thumb, so that the galaxy he’d created was all that remained.

When all the work was finished, the conservators kept a small dark spot in the northwest corner of Grand Central Terminal, where the pale blue ceiling meets the marble wall. This nine-by-five-inch section was left that way intentionally. My father told me that conservators do that, in case historians need to study the original composition. The only way you can tell how far you’ve come is to know where you started.

Every time I’m in Grand Central Terminal, I think about my father. Of how we left that night, hand in hand, our palms glittering like we had stolen the stars.

It is Friday the thirteenth, so I should know better. Getting from Sotheby’s, on the Upper East Side, to the Ansonia, on the Upper West Side, means taking the Q train to Times Square and then the 1 uptown, so I have to travel in the wrong direction before I start going in the right one.

Normally I would walk across Central Park, but I am wearing a new pair of shoes that are rubbing a blister on my heel, shoes I never would have worn if I’d known that I was going to be summoned by Kitomi Ito. So instead, I find myself on public transit. But something’s off, and it takes me a moment to figure out what.

It’s quiet. Usually, I have to fight my way through tourists who are listening to someone singing for coins, or a violin quartet. Today, though, the atrium is empty.

Last night Broadway theaters had shut down performances for a month, after an usher tested positive for Covid, out of an abundance of caution. That’s what Finn said, anyway—New York–Presbyterian, where he is a resident, has not seen the influx of coronavirus cases that are appearing in Washington State and Italy and France. There were only nineteen cases in the city, Finn told me last night as we watched the news, when I wondered out loud if we should start panicking yet. “Wash your hands and don’t touch your face,” he told me. “It’s going to be fine.”

The uptown subway is nearly empty, too. I get off at Seventy-second and emerge aboveground, blinking like a mole, walking at a brisk New Yorker clip. The Ansonia, in all its glory, rises up like an angry djinn, defiantly jutting its Beaux Arts chin at the sky. For a moment, I just stand on the sidewalk, looking up at its mansard roof and its lazy sprawl from Seventy-third to Seventy-fourth Street. There’s a North Face and an American Apparel at ground level, but it wasn’t always this bougie. Kitomi told me that when she and Sam Pride moved in in the seventies, the building was overrun with psychics and mediums, and housed a swingers’ club with an orgy room and an open bar and buffet. Sam and I, she said, would stop in at least once a week.

I was not alive when Sam’s band, the Nightjars, was formed by Sam and his co-songwriter, William Punt, with two school chums from Slough, England. Nor was I when their first album spent thirty weeks on the Billboard charts, or when their little British quartet went on The Ed Sullivan Show and ignited a stampede of screaming American girls. Not when Sam married Kitomi Ito ten years later or when the band broke up, months after their final album was released featuring cover art of Kitomi and Sam naked, mirroring the figures in a painting that hung behind their bed. And I wasn’t alive when Sam was murdered three years later, on the steps of this very building, stabbed in the throat by a mentally ill man who recognized him from that iconic album cover.

But like everyone else on the planet, I know the whole story.

The doorman at the Ansonia smiles politely at me; the concierge looks up as I approach. “I’m here to see Kitomi Ito,” I say coolly, pushing my license across the desk to her.

Lots of celebrities have lived at the Ansonia—from Babe Ruth to Theodore Dreiser to Toscanini to Natalie Portman—but arguably, Kitomi and Sam Pride are the most famous. If my husband had been murdered on the front steps of my apartment building, I might not have stayed for another thirty years, but that’s just me. And anyway, Kitomi is finally moving now, which is why the world’s most infamous rock widow has my number in her cellphone.

What is my life, I think, as I lean against the back wall of the elevator.

When I was young, and people asked what I wanted to do when I grew up, I had a whole plan. I wanted to be securely on a path to my career, to get married by thirty, to finish having kids by thirty-five. I wanted to speak fluent French and have traveled cross-country on Route 66. My father had laughed at my checklist. You, he told me, are definitely your mother’s daughter.

I did not take that as a compliment.

Also, for the record, I’m perfectly on track. I am an associate specialist at Sotheby’s—Sotheby’s!—and Eva, my boss, has hinted in all ways possible that after the auction of Kitomi’s painting I will likely be promoted. I am not engaged, but when I ran out of clean socks last weekend and went to scrounge for a pair of Finn’s, I found a ring hidden in the back of his underwear drawer. We leave tomorrow on vacation and Finn’s going to pop the question there. I’m so sure of it that I got a manicure today instead of eating lunch.

The door to the elevator opens directly into Kitomi’s foyer, all black and white marble squares like a giant chessboard. She comes into the entryway, dressed in jeans and combat boots and a pink silk bathrobe, with a thatch of white hair and the purple heart-shaped spectacles for which she is known. She has always reminded me of a wren, light and hollow-boned. I think of how Kitomi’s black hair went white overnight with grief after Sam was murdered. I think of the photographs of her on the sidewalk, gasping for air.

“Diana!” she says, as if we are old friends.

There is a brief awkwardness as I instinctively put my hand out to take hers and then remember that is not a thing we are doing anymore and instead just give a weird little wave. “Hi, Kitomi,” I say.

“I’m so glad you could come today.”

“It’s not a problem. There are a lot of sellers who want to make sure the paperwork is handed over personally.”

Over her shoulder, at the end of a long hallway, I can see it—the Toulouse-Lautrec painting that is the entire reason I know Kitomi Ito. She sees my eyes dart toward it and her mouth tugs into a smile.

A strange flicker crosses Kitomi’s face. “Then let’s get you a better view,” she replies, and she leads me deeper into her home.

Jodi Picoult is the #1 New York Times bestselling author of twenty-eight novels, including Wish You Were Here, Small Great Things, Leaving Time, and My Sister’s Keeper, and, with daughter Samantha van Leer, two young adult novels, Between the Lines and Off the Page. Picoult lives in New Hampshire. 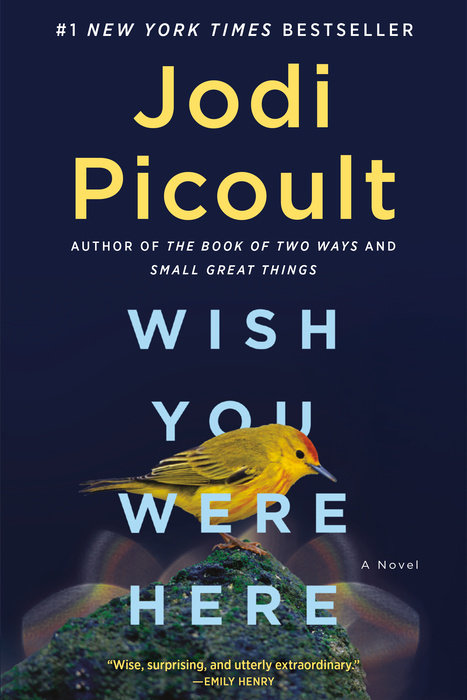