Why rely on fate when you can rewrite the stars? In this sparkling romantic comedy, one woman decides to tinker with the horoscopes of the man of her dreams.

When childhood sweethearts Justine (Sagittarius and serious skeptic) and Nick (Aquarius and true believer) bump into each other as adults, a life-changing love affair seems inevitable. To Justine, anyway. Especially when she learns Nick is an astrological devotee, whose decisions are guided by the stars, and more specifically, by the horoscopes in his favorite magazine. The same magazine Justine happens to write for. As Nick continues to not fall headlong in love with her, Justine decides to take Nick’s horoscope, and Fate itself, into her own hands. But, of course, Nick is not the only Aquarius making important life choices according to what is written in the stars.

Charting the ripple effects of Justine’s astrological meddling, Star-Crossed is a delicious, intelligent, and affecting love story about friendship, chance, and how we all navigate the kinds of choices that are hard to face alone.

“Swoon-worthy . . . a smart, sweet love story about friendship, destiny, and the power of choice.”―Bustle

“Enchanting . . . this book will capture your attention and keep you entertained from the first page to the last.”—BuzzFeed

“This cleverly structured first outing from the pseudonymous Darke will appeal to fans of romantic comedy, astrology, and chaos. Utterly charming and ripe for development as a film.”―Booklist

“Winning . . . Unpretentious, well-drawn characters and the fresh twist on the childhood sweethearts reunited setup make this perfect for fans of romantic comedies.”―Publishers Weekly

An excerpt from Star-Crossed

Nicholas Jordan was born, not beneath a starry sky, but in Edenvale Hospital—a modest red-brick building on the outskirts of a town that had four pubs, no banks, one swimming pool, six service clubs and bitterly resented water restrictions each summer. The hospital was surrounded by beds of bright pink bougainvillea and rectangles of thirsting lawn, and at the moment of little Nick’s birth, the sky above its hot tin roof was the scorching blue of a southern hemisphere noon in February.

And yet the stars were there. Out beyond the cloudless heat of the troposphere, beyond the stratosphere’s blanket of ozone, beyond the mesosphere and the thermosphere, the ionosphere, the exosphere and the magnetosphere, were the stars. Millions of them, patterning the blackness and orbiting themselves into the precise configuration that would be forever mapped onto the soul of Nicholas Jordan.

Joanna Jordan—Aries, owner-operator of Edenvale’s Uppercut hair salon, the freakishly accurate goal attack for the Edenvale Stars netball team, and a two-time Miss Eden Valley titleholder—did not think of the stars in the hours that followed her son’s birth. Blissed out and disheveled in the hospital’s sole delivery suite, she only stared into little Nick’s face, and charted influences of a more terrestrial nature

“He’s got your nose,” she murmured to her husband.

And she was quite right. Her baby had a perfect, miniature replica of the nose that she knew and loved on the face of Mark Jordan—Taurus, square-shouldered Australian Rules defender turned polo-shirted financial planner, lover of baked cheesecake and helpless admirer of long-legged women.

“But your ears,” Mark said, feeling his hands to be suddenly and gigantically out of scale as he smoothed back a wisp of the dark hair that feathered Nick’s newborn head.

And so, Joanna and Mark looked over their son and traced back to various sources his cheeks, forehead, fingers and toes. The new parents found an echo of Mark’s brother in the wide setting of their baby’s eyes, and a hint of Joanna’s mother in his full and expressive lips.

Nowhere, however, did they find, or even think to look for, the fingerprints of Beta Aquarii, a yellow supergiant burning some 537 lightyears from Earth. Or the more diffuse touch of the Helix Nebula, or indeed any of the other heavenly bodies that comprised the sprawling constellation of Aquarius, within whose auspices the sun was housed at the time of their baby’s birth.

An astrologer, looking at the pinpricks of destiny as laid out in little Nick’s natal chart, might on the day of his birth have been able to tell you that this child would grow up to be original to the point of slightly eccentric, creative and caring, but with a competitive streak so wide that his siblings would prefer eating Brussels sprouts to playing Monopoly with him. He would love costume parties and have a habit of bringing home any starving dog or flea-ridden cat that crossed his path.

This same astrologer might have allowed themselves a fond smile as they foretold that Nick, from his mid-teens onward, would be a true believer when it came to the stars. Nick would like the fact that he was an Aquarius—a sign he would associate with innovative and original thinking, as well as summertime, music festivals and hot young hippies who smelled of patchouli and sex.

On the day of Nick’s birth, however, there was no astrologer at hand, and the only person who did make an astrological prediction about baby Nick at that time was Joanna Jordan’s friend Mandy Carmichael. Mandy—Gemini, dimple-cheeked darling of the regional television network’s weather report, radiant newlywed, ABBA fanatic—appeared at the hospital like a good fairy, straight after work. Her face was still thickly plastered with foundation and she teetered on high heels as she balanced in her arms an enormous blue teddy bear and a bunch of supermarket chrysanthemums. Soon the teddy was reclining in a chair, the chrysanthemums were in a Fowlers preserving jar and Mandy was barefoot beside the bed, cradling her friend’s firstborn with infinite care. “A little Aquarius, hm?” she said, her eyes misting. “Don’t expect him to be like you and Mark, will you, JoJo? Aquarians are different. Aren’t you, little one?”

“Which is why he’ll probably be an artist. Or a dancer. Won’t you, my treasure?”

Mandy slipped her finger into the closing star of baby Nick’s hand, and for a moment she was uncharacteristically speechless. Then she said, “Jo, he’s beautiful. Just beautiful.”

By the time Mandy stepped out of the hospital, dusk had fallen, bringing with it a breeze as softly cool as the wistful mood that settled on her as she cut across the spiky grass—carrying her shoes—to the parking lot. The western sky was a smoky blue strung with drifts of low, pinkish cloud, but in the east a few eager stars had already burst through the deepening dark. Mandy slipped in behind the wheel of her car and watched those stars for a good long while. The smell of baby was in her nostrils.

The following Friday, at Curlew Court—a cul-de-sac in a newly built part of Edenvale that was full of concrete curbing and single-story homes with bright-colored roofs, mown lawns and eucalypt saplings in plastic plant guards—Drew Carmichael flopped onto his back and said, “Wow.”

Alongside him, on his next-door neighbor’s trampoline, was an empty bottle of Baileys Irish Cream, two smeary tumblers and his sweaty, smiling, semiclad wife. Drew—Libra, agricultural consultant, amateur aviation enthusiast, Pink Floyd aficionado and fearsome bedroom-mirror air guitarist—had been home from a two-week business trip for less than an hour, and he had a sense of having been quite deliberately ravished. Drained of his essence, even. Fortunately, the neighbors were on holiday in Queensland.

“Mmmmmm,” said Mandy, smiling up into a star-filled sky.

Drew propped himself up on one elbow and looked at his wife. He could see a shadow on her left cheek where it dimpled, and smell the mischief on her damp skin.

“What was that all about?” he asked, putting a hand on the soft paleness of her exposed belly. “Hm?”

“Excuse me,” she said, slapping his hand away but grinning widely, “but I’m a married woman. Don’t touch what you can’t afford.”

He tickled her, and she giggled. “What are you up to?”

Slightly drunk and entirely happy, Drew pillowed his head on folded arms and followed her gaze, up into space.

On that February night, the Carmichaels set in motion a baby girl, who would be born in the early hours of a November morning under the sign of Sagittarius. She would arrive, petite and perfectly formed, with her skull capped in a finer version of the light brown hair that would eventually curl around the sharp contours of her face. Her eyes would be hazel, her chin would be pointed and her lips—like her mother’s—would form a pronounced Cupid’s bow. Her dark eyebrows would—like her father’s—be straight and almost severe.

An astrologer might have predicted that this baby would grow up to be a straight shooter; playful, but also something of a perfectionist. She would love words, appear at age nine on a kids’ TV spelling contest (which she would win) and usually have a pen wedged behind her ear. Always her bedside table would groan under its payload of books (read, half read, to read), and there was a good chance that you would find, concealed within this pile of books, an Ikea catalogue, since wardrobeorganization porn would, for this girl, be a lifelong guilty pleasure. Her memory would be as flawless as a gleaming, stainless steel filing cabinet and even her text messages would be faultlessly formatted and punctuated.

It might also have been accurately foretold, with a sorrowful shake of the astrologer’s head, that this child would grow up to have scant regard for the stars. To be frank, she would consider horoscopes to be a crock of implausible hog-shit.

“Justine,” Mandy murmured, mostly to herself. “What?” said Drew.

Minnie Darke is the internationally acclaimed author of Star-Crossed, which was published in more than 30 countries. She lives in Tasmania with her family, and there is always music. 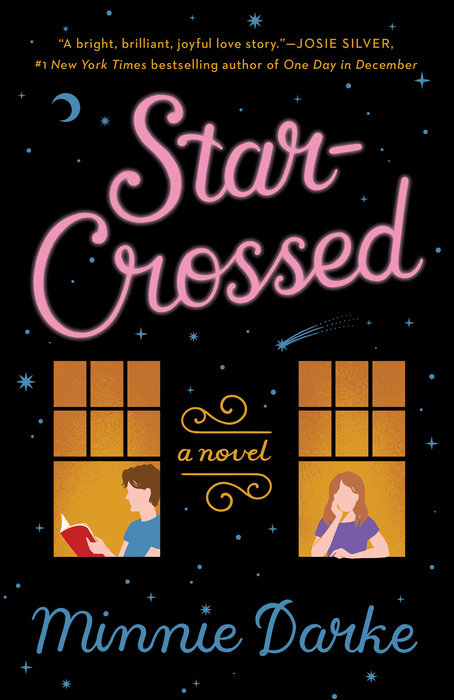