A Story of Human Emotions

A groundbreaking tour of the human mind that illuminates the biological nature of our inner worlds and emotions, through gripping, moving—and, at times, harrowing—clinical stories

“[A] scintillating and moving analysis of the human brain and emotions.”—Nature

“Beautifully connects the inner feelings within all human beings to deep insights from modern psychiatry and neuroscience.”—Robert Lefkowitz, Nobel Laureate

Karl Deisseroth has spent his life pursuing truths about the human mind, both as a renowned clinical psychiatrist and as a researcher creating and developing the revolutionary field of optogenetics, which uses light to help decipher the brain’s workings. In Projections, he combines his knowledge of the brain’s inner circuitry with a deep empathy for his patients to examine what mental illness reveals about the human mind and the origin of human feelings—how the broken can illuminate the unbroken.

Through cutting-edge research and gripping case studies from Deisseroth’s own patients, Projections tells a larger story about the material origins of human emotion, bridging the gap between the ancient circuits of our brain and the poignant moments of suffering in our daily lives. The stories of Deisseroth’s patients are rich with humanity and shine an unprecedented light on the self—and the ways in which it can break down. A young woman with an eating disorder reveals how the mind can rebel against the brain’s most primitive drives of hunger and thirst; an older man, smothered into silence by depression and dementia, shows how humans evolved to feel not only joy but also its absence; and a lonely Uighur woman far from her homeland teaches both the importance—and challenges—of deep social bonds.

Illuminating, literary, and essential, Projections is a revelatory, immensely powerful work. It transforms our understanding not only of the brain but of ourselves as social beings—giving vivid illustrations through science and resonant human stories of our yearning for connection and meaning.

An excerpt from Projections

Hegel made famous his aphorism that all the rational is real and all the real rational; but there are many of us who, unconvinced by Hegel, continue to believe that the real, the really real, is irrational, that reason builds upon irrationalities. Hegel, a great framer of definitions, attempted with definitions to reconstruct the universe, like that artillery sergeant who said that cannon were made by taking a hole and enclosing it with steel. —Miguel de Unamuno, Del sentimiento trágico de la vida, translated by J. E. Crawford Flitch


The new thoughts came with all the surety of a change in season, in a gathering together of signs. Like the air of early fall, the first few weeks seemed to bring a shift in pressure in her mind, with a hint of wind revealing itself—a shimmering of her highest leaves, a rustling in the neural canopy.

She could feel the change in her skin as well, a subtle tingle, a chill of early fall. The sensation stirred a memory from a dozen years ago: Wisconsin in September, with her brothers AJ and Nelson, chasing Canada geese along the lakeside. Winnie had been seventeen after that summer of lymphoma chemo. Nothing had ever felt so charged as her return to the outdoors that fall after methotrexate—all around her and within her, even to her lungs, and to her brain, a mist of the season had seemed infused, clear and crystalline. In remission they had said, a likely cure, and they were right.

But this time, with the rustling of the leaves, unsettling intimations had come, borne high and kitelike on the same ghost wind—and there was a feeling of openness, of vulnerability, that was not entirely posi­tive. She abruptly decided to take a month off, which was unprece­dented for someone with her caseload. The team muttered, including her supervisor, but Winnie had built serious credibility, even a kind of  celebrity, winning allowance after allowance, constructing patent es­tates from chaos—wielding her mind like a weapon trained in both law and engineering, unique in its ability to grapple with interlocking artificial-intelligence intellectual property families. Her team of law­yers and staff had filed seventeen hundred patents—counting all the divisionals and continuations—for their major client last year alone. But now she needed a month of leave; there were pressing issues to address. She was exposed.

The first issue was Oscar, who lived in the townhouse next door. He had installed a satellite dish on the roof over his deck—and seemed to be preparing to download her thoughts. Winnie needed someone to pay him a visit, dismantle the dish, and take him into custody; her homeowner’s association security would have been natural to call in, but they were probably allied with him. Same with the police. She needed to find a do-it-yourself solution, to take care of herself, as she always had.

A trick occurred to her, a temporary countermeasure against the satellite dish—just a quick kludge, but with a chance of really working. She dug out a heavy black knit cap, the one with the reflective Raiders logo she got in college, which she hadn’t worn since her Berkeley days. She put it on and pulled it down tight over her ears. Right away, every­thing seemed more contained. It was a bit surprising that it worked that well, with just the silvery logo of a football team as an electromagnetic field insulator, but there was no doubt—the satellite signal felt less likely to get in, or her own thoughts to leak out. The hat’s tightness helped to shape the air around her head, to separate and clarify bor­ders.

This vulnerability was correctable, then, and a more permanent so­lution dwelt in engineering. There were structural changes she could make inside the bedroom wall to reinforce that border with a conduc­tive material—installing a true modern Faraday cage as a shield against the satellite dish signal. She started working on the wall, and her home tool kit gradually expanded with a few short drives to the hardware store across town for some more specialized items—a crowbar, a little chicken wire, some sheet metal, a voltmeter.

But other developments in this strange new season were more dis­turbing, and harder to address. Outside her expertise. More biological. At the center of it all was Erin, assistant to Larry the senior partner, younger than Winnie and five months along. Erin had become preg­nant clearly to taunt her, targeting Winnie for living alone and not having children. It was unprofessional of her, and embarrassing for Winnie, and a little frightening considering Erin’s proximity to power in the firm.

Here, there was no clear engineering solution to address the offen­sive behavior. Winnie had to get to Larry himself. Larry was the only one who could discipline Erin, and he needed to be informed and challenged to act. So over a weekend Winnie planned an incursion into the upper reaches of her own law firm—the C‑class floor, with all the chiefs and captains. She mapped out her access plan and rehearsed the conversation with Larry—mostly in her head at first, not using her computer or the Internet, as it could be assumed Erin had hacked everything of hers, and had long since obtained access to her emails.

A lot of her planning became sketching on paper, elaborate recon­structions of desk orientations and restroom placements from memory, but then she got restless, needing to move her body, to do something physical, and so Winnie went back to her satellite dish countermeasures for several days—removing drywall, peeling the insulation back from her east-facing wall to see what lay behind it, and beginning to arrange the new metallic shielding.

Then came new, darker undernotes to the change in season, and some were frankly frightening. Over the second weekend of her leave, she became aware of the grim and gray-lipped ones—information vam­pires. Stocky, thick, and strong as ox hearts, lurking in the shadows be­hind the dumpsters, they started draining her energy and thoughts, tapping directly into her. And with this she moved beyond, into some new phase. This new season was not just wind shimmering her leaves. No longer just gentle phantom fingers softly stroking, now it felt more like glumpy digits pinching coarsely, aggressively, for her cells like grains—her brainpan a helpless, squat saltcellar.

And then, finally, a new voice emerged on Sunday, from within her head—mid-pitched, ambiguously sexed—intermittently repeating the word disconnect. The voice felt familiar in some way, with a quality she recognized from adolescence, when she once heard her own thoughts at that pitch, except now much louder and clearer. It was alien yet deep within her somehow, a shout between her temples.

A Story of Human Emotions 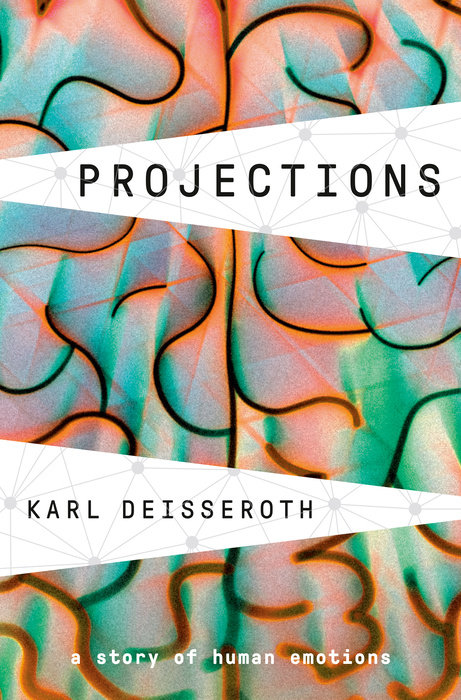