New Science Behind the Subtle Art of Raising Sons

“If you’re raising a boy, you need this brilliant book. It is clear, wise, and eye-opening.” —Lisa Damour, Ph.D., author of Untangled

When boys enter puberty, they tend to get quiet—or at least quieter than before—and parents often misread their signals. Here’s how to navigate their retreat and steer them through this confusing passage, by the bestselling author of The Care and Keeping of You series and Guy Stuff: The Body Book for Boys.

What is my son doing behind his constantly closed door? What’s with his curt responses, impulsiveness, newfound obsession with gaming, and . . . that funky smell? As pediatrician and mother of two teenagers Cara Natterson explains, puberty starts in boys long before any visible signs appear, and that causes confusion about their changing temperaments for boys and parents alike. Often, they also grow quieter as they grow taller, which leads to less parent-child communication. But, as Natterson warns in Decoding Boys, we respect their increasing “need” for privacy, monosyllabic conversations, and alone time at their peril. Explaining how modern culture mixes badly with male adolescent biology, Natterson offers science, strategies, scripts, and tips for getting it right:

• recognizing the first signs of puberty and talking to our sons about the wide range of “normal” through the whole developmental process
• why teenagers make irrational decisions even though they look mature—and how to steer them toward better choices
• managing video game and screen time, including discussing the unrealistic and dangerous nature of pornography
• why boys need emotional and physical contact with parents—and how to give it in ways they’ll accept
• how to prepare boys to resist both old and new social pressures—drugs, alcohol, vaping, and sexting
• teaching consent and sensitivity in the #MeToo culture

Decoding Boys is a powerful and validating lifeline, a book that will help today’s parents keep their sons safe, healthy, and resilient, as well as ensure they will become emotionally secure young men.

“Comforting . . . a common-sensical and gently humorous exploration of male puberty's many trials.”—Kirkus Reviews

An excerpt from Decoding Boys

How to Talk to Boys

If boy puberty hired a marketing firm to design a logo, it would be an image of a closed door; if it were animated, the door would be slamming.

Someone once told each and every one of us boy-parents that isolationism was a normal guy thing, and we collectively agreed to accept it. So when boys enter puberty and slowly begin to shut out the world, we parents tend to let it happen. And then they emerge out the other end as men (or man-boys at the very least) and we think, Who is this guy and why don’t I know very much about what makes him tick?

We can’t decode our boys if we don’t talk to them, even though that’s precisely what many of us tend to do: not talk to them. Testosterone and other naturally produced chemicals may have a hand in making our sons retreat, but our own parental keep-the-peace, give-’em-what-they-want, be cool strategy of silence just breeds more silence. It is time for all of us to let go of our preconceived notions that our sons don’t want to talk.

And so, welcome to the end of the book offered up at the very start. Usually, precious bullet-pointed nuggets of summary appear at the end as reward to the reader for having made it through data, anecdotes, and pages of waxing philosophic. Not here. I am flipping that structure because it makes no sense to hold out on you. If you have talking tools at your disposal, then as you read through these chapters you can dive in with your son on any of these various bits and massive pieces of puberty, sex, drugs, and all the rest when they are fresh in your mind. In other words, read these couple of pages and there are no more excuses for delaying the conversations.

So, without further ado, here’s how to talk to boys about puberty and the enormous physical, social, and emotional shifts that go along with it. The shortest first chapter you may ever come across in a parenting book, ideally as helpful as it is brief. And spoiler alert: every single one of these tips applies to girls, too.

How to Talk to Boys

1. START TALKING! Take any discomfort you may feel about any of the subjects in this book and multiply by 100. That’s how uncomfortable your son feels. So get over your jitters. In order to open up dialogue with your kid, you will need to start the ball rolling. That means talk. Out loud. To him. Even if you are dying inside.

2. LISTEN. When guys are ready to talk—for some it happens a lot sooner than for others—listen. And ask questions, too. These are the easiest ways to avoid dominating the conversation. Don’t just dispense wisdom (no matter how genius you believe your advice to be) but actually ask what he thinks, because you may learn something.

3. AVOID EYE CONTACT. At least in the beginning, find ways to have conversations that don’t require you to stare down your kid. The car is an ideal place for this because, ostensibly, your eyes are on the road and he’s nowhere near your direct line of sight. Ditto that moment when you say good night and flip the lights off—literally not seeing one another can open the floodgates. Or pick your own favorite time and place to make believe the person you are talking with is not actually there. It’s a great icebreaker. It also largely explains the runaway success of texting and social media.

4. TURN OFF DEVICES. Speaking of what happens on screens . . . ​If you’re trying to have a moment here, make sure that your son’s eyes aren’t glued to one. You’ll never utter anything more deep or meaningful than what’s on the phone in front of him.

5. GRAB TEACHABLE MOMENTS. You don’t have to make an appointment with your kid to have a meaningful talk. And nothing bad needs to have transpired. Just grab a teachable moment anytime it pops up: when you are watching something together and you see cringe-worthy behavior, point it out; when a bus drives by with a completely inappropriate ad that you cannot believe is even legal, talk about it; when someone is walking down the street in a plume of vapor that smells like mango, point it out rather than pretending it doesn’t exist (and for those of you who don’t know where that fruity cloud came from, that’s vaping). Use other people’s behaviors—both good and bad—to illustrate to your own kids what you expect from them. They may return the favor by pointing out your habits, so try not to get annoyed.

6. EXPLAIN WHY WITHOUT LECTURING. Every time you make some blanket statement or rule, follow it with a short explanation of why. You are not apologizing—rather, you are providing a rationale so that your kid can actually take your rule outside of your house (or even just your line of sight) and adopt it. “No” is indeed a full sentence, but “No, because . . .” is a far more effective one. Keep it brief, though, to avoid falling into the pit of serially lecturing your kid, because this breeds silence, sometimes fear, or it’s just plain tuned out. Back-and-forth dialogue is the key to successful parenting. So avoid monologues and instead make almost every conversation a two-way street.

7. BE PATIENT. In order to win at parenting through puberty, have many talks over many years, and take these conversations slowly. When a conversation goes quiet—which it will—ride out the silence by practicing the art of letting your kid break it when he’s ready to speak. If he seems perfectly happy sitting in silence, pepper him with occasional questions or keep adding little bits of information until he says, “Okay, got it, we can stop.” Or until he literally leaves the room. That happens. It’s fine.

8. POINT OUT THE BRIGHT SIDE, BUT DON’T OVERPROMISE. Puberty is awkward, at least some of the time. It can make a big difference if you point out the parts that are proceeding slightly more seamlessly. For instance, if your son is struggling with bad acne but has started his growth spurt and doesn’t have any insecurities about his size, you may want to mention the advantages of his height. Or, if you have a perfectly complected petite guy, underscore the upside of his clear skin. The goal is not to throw some other kid under the bus, but rather to remind your own child that there may be some elements of this journey he is taking for granted. Puberty is the ultimate game of “the grass is always greener.”

That said, remember that puberty is fickle, and something that is not an issue one day may suddenly become one the next. The tallest boy in sixth grade may find himself shorter than average in the long run; the guy with the perfectly complected face might discover a giant crop of “backne.” Don’t get burned by this. The grass is sometimes greener.

9. FIND YOUR SURROGATE. There are going to be some things your kid just doesn’t want to talk about with you. That’s normal, so plan for it. Talk to your son about who else he can go to for advice on the important stuff. Ideally, identify someone you both trust, and that someone should have at least a few years on him—his same-aged best friend is not ideal for the part. Here’s a really important caveat: tell the appointed person! Prepare him or her and even share what you hope they will say in specific circumstances. There’s nothing worse than being surprised by your go-to status in the middle of an emergency.

10. AND FINALLY, TAKE DO-OVERS. Perhaps the most valuable piece of advice on the list, it’s not about talking to your son as much as talking yourself off the ledge. If you screw up—which we all do—own it and pivot. We will make mistakes, bring our children to tears, set rules that are nonsensical, say things we don’t mean, laugh at the wrong times, punish disproportionately, miss the things that really needed discipline, roll our eyes in a less-than-subtle way, wear our hearts on our sleeves, yell, not yell, and make every other mistake in the book. We’re human. When you make the wrong call, set the wrong rule, or react in the wrong way, take ownership, apologize as necessary, and then give yourself another chance. Take the do-over. That’s called being a parent.

Cara Natterson, MD, is a pediatrician, popular speaker, consultant, and New York Times bestselling author of multiple parenting and health books, including The Care and Keeping of You, a three-book series with more than six million copies in print, and Guy Stuff, the corollary for boys. A graduate of Harvard College and Johns Hopkins Medical School, Cara trained in pediatrics at University of California at San Francisco. After working as a general pediatrician for many years, she founded Worry Proof Consulting, a first-of-its-kind practice offering parents open-ended time. Cara also provides medical expertise for numerous parenting websites and she serves on several boards including Starlight Children’s Foundation, Mattel’s Barbie Council, The Honest Company medical advisors, and Zemcar. Cara lives in Los Angeles with her husband and their two teenagers.

New Science Behind the Subtle Art of Raising Sons 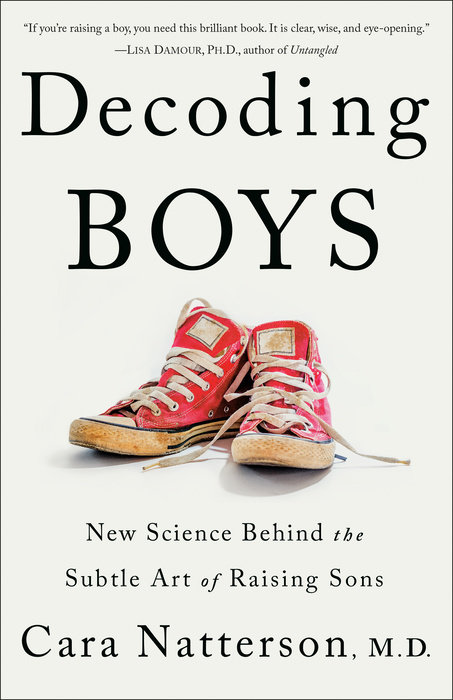