Chief Jim Hopper reveals long-awaited secrets to Eleven about his old life as a police detective in New York City, confronting his past before the events of the hit show Stranger Things.

Christmas, Hawkins, 1984. All Chief Jim Hopper wants is to enjoy a quiet first Christmas with Eleven, but his adopted daughter has other plans. Over Hopper’s protests, she pulls a cardboard box marked “New York” out of the basement—and the tough questions begin. Why did Hopper leave Hawkins all those years ago? What does “Vietnam” mean? And why has he never talked about New York?

Although he’d rather face a horde of demogorgons than talk about his own past, Hopper knows that he can’t deny the truth any longer. And so begins the story of the incident in New York—the last big case before everything changed. . . .

Summer, New York City, 1977. Hopper is starting over after returning home from Vietnam. A young daughter, a caring wife, and a new beat as an NYPD detective make it easy to slip back into life as a civilian. But after shadowy federal agents suddenly show up and seize the files about a series of brutal, unsolved murders, Hopper takes matters into his own hands, risking everything to discover the truth.

Soon Hopper is undercover among New York’s notorious street gangs. But just as he’s about to crack the case, a blackout rolls across the boroughs, plunging Hopper into a darkness deeper than any he’s faced before.

An excerpt from Stranger Things: Darkness on the Edge of Town

The hallway was white. Walls, floor, ceiling. The works. White on white on white and it did nothing for Hopper except make him feel slightly dizzy. Snow blindness in the inner city. Imagine that.

A whole house that was white, top to bottom, every room, every level. Outside it was a Brooklyn brownstone. Inside it was an art installation. Clutching his glass of red wine by the bowl, Hopper was terrified of spilling even a drop.

And they had kids, too. Two of them—twins, who, even now, were celebrating with a joint birthday party in the vast kitchen at the rear of the house, a kitchen that opened onto a lush garden surrounded by high walls, an impossible oasis hidden in the spaces between row houses, the greenery somehow surviving the baking summer heat that was turning the rest of New York into a dust bowl. The noise of the party reverberated down the spartan hallway in which Hopper had sought solace, at least for a short while, with his ill-chosen drink.

He lifted the glass and peered at the contents. Red wine at a kid’s birthday party.

Yes, the Palmers were that kind of people.

Hopper sighed and took a sip. This wasn’t how he had planned to spend the Fourth of July, but he knew he shouldn’t judge. The children—all thirty of them, nearly the whole of Sara’s elementary school class—were having a great time, being entertained by a team of professionals hired just for the occasion by the Palmers, and being fed and watered—and sugared—by a catering crew that were probably being paid more for this one gig than Hopper earned in a whole month.

It wasn’t just the children who were being entertained. The adults were too. Somewhere down the white hall, through one of the many white doors, the parents—minus Hopper—were all gathered around a show put on just for them. Some kind of magic act, someone had said. Diane had tried to persuade Hopper to come along—had even tried dragging him by one arm—but . . . a magic act?

No, he was fine right where he was. Alone. In the hallway of infinite white. With his wine.

A roar of laughter came from the kitchen, matched by an almost simultaneous roar from the other end of the hallway. Hopper looked one way, then the other, wondering which act to catch. Then, with a shake of the head as he chided himself for being a party pooper, he headed for the parents. As he opened the door at the end of the hall, he half expected to find beyond a white room with a white grand piano in the center, John Lennon at the keys, Yoko Ono draped over the top.

What he found was another reception room, one of several within the brownstone, this one perhaps slightly less stark than the rest of the house, the white walls at least broken up by the warm brown of ornate, probably original, bookcases.

Hopper clicked the door closed behind him and nodded in polite greeting to the other parents standing nearby. They were, Hopper noted, mostly the men, while around the large circular table that occupied most of the room sat the mothers and aunts, their attention fixed on the woman who sat at the “head” of the table, directly opposite the door. The woman was young and wore a red patterned scarf over her head, and sitting on the table in front of her was nothing but a goddamn crystal ball.

Hopper’s jaw tightened, but he resisted the urge to check his watch. He felt uncomfortable and out of place, apparently the only man present who hadn’t taken an invitation to a child’s birthday party as an opportunity to dress up. The other fathers were clad mostly in wide-lapel sports jackets in varying earthen shades, with ties to match.

Ah, yes, the Model T jacket and tie. Any color you like so long as it’s brown.

Suddenly Hopper didn’t feel quite so bad in his red plaid shirt and blue jeans. At least he was comfortable. Polyester in this heat was not a wise decision—as some of the men around him seemed to have discovered, given the red faces and sheen of sweat on several of them.

Hopper hid his grin in his wine glass as he drained it, and turned his attention to the scene unfolding in the middle of the room, where Diane sat with the other women—most clad in long, flowing cotton dresses that looked a lot more breathable than the men’s fashion choices—leaning in to listen as the fortune-teller stared into the crystal ball and pretended to read the future of . . . was it Cindy, Tom’s mother?

Hopper had lost track. Suddenly he felt like another glass of wine.

The fortune-teller droned on. She was younger than Hopper would have expected, although he wasn’t really sure what age group fortune-tellers were supposed to be. Weren’t they meant to be old women? Not that it mattered—this was an act, nothing more.

Hopper told himself to relax, enjoy the show, stop being such a jerk.

The round of applause that came next snapped Hopper out of his reverie. He looked around the room, and saw that the women at the table were shuffling themselves along, so the next subject was now sitting opposite the fortune-teller.

It was Diane. She laughed at something her neighbor said, then glanced over her shoulder. Her eyes lit up when she saw Hopper, and she waved at him to come over.

With a sheepish look to his fellow fathers, Hopper moved forward to stand behind Diane’s chair. His wife held her hand out and he squeezed it, then she looked back up at him with a smile.

He grinned back. “Hey, what are you looking at me for? Madame Mystique here is going to see your future.”

At that, the fortune-teller laughed. She pushed back her scarf a little and looked at Hopper. “The past, the present, the future—all ways, all paths are open to me!” She waved her hands over the crystal ball.

Diane grinned and, taking a deep breath, straightened in her chair and closed her eyes. She let her breath out slowly through her nose.

The room cheered and the fortune-teller, fighting to hold back her own laughter, rolled her neck and stared intently into the crystal ball, her palms flat on the table either side of it.

The fortune-teller didn’t speak. Hopper watched as her gaze narrowed, her brows knitting together as she appeared to concentrate. There were some murmurs from the back of the room as some of the men lost interest.

The fortune-teller jerked back from the crystal ball. Hopper laid his hand on his wife’s shoulder, and felt her hand rest on his.

The fortune-teller closed her eyes, her features twisted as though she was in pain. Hopper felt Diane’s grip tighten around his hand. Hopper started to feel a little uneasy. This was an act, and none of it was real, but something in the room had changed, the lighthearted feeling of fun suddenly evaporating.

He cleared his throat.

The fortune-teller opened her eyes and tilted her head as she looked into the crystal.

Diane shifted in her chair and looked up at Hopper.

The fortune-teller gasped. Diane jumped in fright, along with half of the people in the room.

“The darkness is coming. A night with no end. A day with no dawn. The day of the—”

“I said that’s enough!” Hopper thumped the table with his hand. The fortune-teller’s eyes snapped open and she gulped a lungful of air. She blinked several times as she looked around the faces in the room, her own expression one of surprise, like she had just woken from a deep sleep. 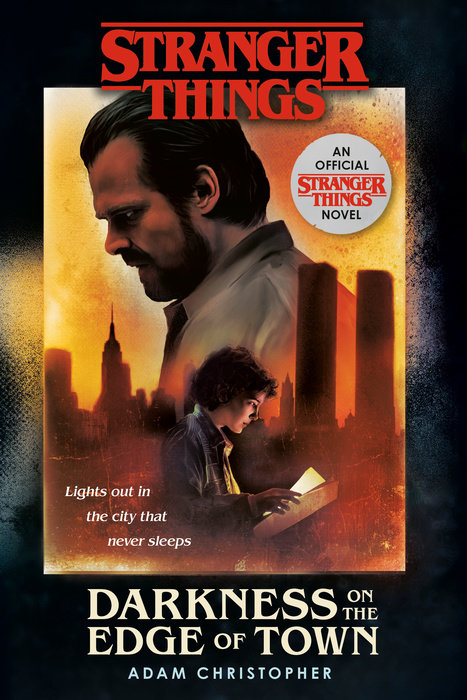