My Acadia-to-Zion Journey Through Every National Park

NEW YORK TIMES BESTSELLER • “A delightful sampler plate of our national parks, written with charisma and erudition.”—Nick Offerman, author of Paddle Your Own Canoe

From CBS Sunday Morning correspondent Conor Knighton, a behind-the-scenery look at his year traveling to each of America's National Parks, discovering the most beautiful places and most interesting people our country has to offer

NAMED ONE OF THE BEST BOOKS OF THE YEAR BY OUTSIDE

When Conor Knighton set off to explore America's "best idea," he worried the whole thing could end up being his worst idea. A broken engagement and a broken heart had left him longing for a change of scenery, but the plan he'd cooked up in response had gone a bit overboard in that department: Over the course of a single year, Knighton would visit every national park in the country, from Acadia to Zion.

In Leave Only Footprints, Knighton shares informative and entertaining dispatches from what turned out to be the road trip of a lifetime. Whether he's waking up early for a naked scrub in a historic bathhouse in Arkansas or staying up late to stargaze along our loneliest highway in Nevada, Knighton weaves together the type of stories you're not likely to find in any guidebook. Through his unique lens, America the Beautiful becomes America the Captivating, the Hilarious, and the Inspiring. Along the way, he identifies the threads that tie these wildly different places together—and that tie us to nature—and reveals how his trip ended up changing his views on everything from God and love to politics and technology.

Filled with fascinating tidbits about our parks' past and reflections on their fragile future, this book is both a celebration of and a passionate case for the natural wonders that all Americans share.

An excerpt from Leave Only Footprints

Yellowstone was the world’s first national park. The first sentence on the park’s website makes sure you are aware of that bit of trivia. To be first is to be remembered.

But first does not always mean best (although in Yellowstone’s case, it just might). Still, a first kiss, a first love, a first date—these are the moments that we memorialize, even if they end up not being all that great. First equals special.

That may be why there are so many spots that claim to offer the first view of the sunrise in the United States. The sunrise marks the first light of a new day, and town tourism bureaus across the country claim that they alone are where you can see that light before anyone else. Of course, with the sunrise, being first is just a matter of seconds.

Guam bills itself as “Where America’s Day Begins.” Out in the middle of the Pacific, closer to Japan than to Hawaii, Guam is fourteen hours ahead of the East Coast, since it lies just west of the International Date Line. But to count Guam as the first sunrise almost seems like cheating, especially since, fifteen hundred miles farther east, there’s Wake Island, an air force base where the sign on the runway once read Where America’s Day Really Begins. Dang, Wake Island. Way to throw a little sunrise shade.

After passing over Asia and Europe, the sun eventually shines on Cadillac Mountain at Acadia National Park in Maine. From mid-September through mid-March, this is where the first rays of sun are said to hit the contiguous United States. Even that honor is true only during the winter months, since the tilt of the earth affects the sun’s position on the horizon. In the summer, Mars Hill, Maine, sees the first light. (And since both spots are pretty remote, Eastport, Maine, advertises itself as the first city to see the sun rise.) Perhaps there’s a reason an asterisk looks just like a sun.

Anyway, as far as I can tell, on January 1, the highest peak of Acadia National Park is the first place in the contiguous United States to see the sun rise. The first sunrise on the first day of the year. And so that’s where I decided to kick off my quest to see every national park in the country. I knew it was going to be a busy year—I wanted to get a head start.

In the summer, tour buses can drive to the top of Cadillac Mountain in a matter of minutes. But in the winter, the road shuts down. Everything shuts down. In the nearby town of Bar Harbor, even big chain hotels put up see you next spring signs. Only a few restaurants stay open, feeding the locals who have decided to brave the winter.

Those who stay have a national park to themselves. Acadia gets 80 percent of its visitors in just four months of the year, but it’s gorgeous in the winter—crystal blue lakes become bright-white ice-fishing destinations, hillsides become ski runs, and the road that leads to the top of Cadillac Mountain, covered in snow, becomes a dangerous, slippery hike.

My headlamp shone on the first part of the road, illuminating the snow in the distance and my breath in front of my face. I could see sets of fresh bootprints up ahead, both reassuring and unsettling. There were other people out here in the dark, other people who had gotten up even earlier than I had to climb this mountain. Wherever they were, I couldn’t hear them—the only sound came from my brand-new boots, crunching down into the snow.

On my drive to the park, I had passed people who were still coming home from their drunken celebrations. The night before was the first time since I was seven that I didn’t count down to the New Year. It was the first time—ever—that I spent New Year’s Eve by myself. The desk clerk at the Hampton Inn back in Ellsworth thought I was joking when I asked for a 3 a.m. wake-up call. I was in bed by ten. I slept with the lights on so that, when the early-morning call came, I’d be less tempted to go back to sleep.

I was wide awake now—the freezing air made sure of that. I took a swig from my thermos, full of mid-tier chain-hotel lobby coffee. I could feel it more than I could taste it, the hot liquid sliding down my throat and warming my entire body. It felt amazing. I wanted to keep drinking, but I was nervous: I know what happens if I drink too much coffee. I didn’t fly all the way to Maine to begin the year by taking a shit in the snow.

Acadia is on Mount Desert Island—pronounced by the locals more like de-ZERT. Which, sadly, makes it sound way more delicious than it really is. In the 1600s, French explorer Samuel de Champlain named the area l’Isle des Monts-déserts, because the mountain summits were so bare and rocky. “Deserted.”

Of course, Native Americans were here thousands of years before Champlain. This will be a common theme at almost every park I visit. A “discovery” of land that was already inhabited by someone else, a history written by white settlers. The Wabanaki, “the people of the Dawnland,” greeted the dawn on this island long before the first wave of French Jesuits arrived.

Maine seems so quintessentially New England that it’s hard to remember it was once New France. It might have stayed that way too had an English ship not attacked the Jesuits just as they were starting to do some baptizing. For the next 150 years, Mount Desert Island was plunged into a series of small skirmishes, but neither side really cared that much. Nobody saw much value in Acadia.

Nobody except for Antoine Laumet. Laumet immigrated to New France in 1683 and decided to reinvent himself, a process that began with making up a hilarious fake name and title: “Antoine Laumet de la Mothe, sieur de Cadillac.” He allegedly made up all sorts of stories about his nobility and military conquests and eventually talked his way into a land grant of one hundred thousand acres—all of Mount Desert Island.

While the “sieur de Cadillac” didn’t last long in Maine—the farming life wasn’t for him—the chilly mountain I was walking up still bears his invented name. As does an eighty-thousand-dollar Escalade, by the way. It’s the same damn Cadillac. This Talented Monsieur Ripley went on to found Detroit.

Plodding uphill in the snow was making me sweat, and I stripped off another layer. Most of what I was wearing was purchased two days earlier at Gander Mountain Sports in West Virginia, or “Redneck REI,” as my pal from high school lovingly described it. As a matter of policy, REI doesn’t sell guns, bows, or even fishing rods, but the entire back half of Gander Mountain is an arsenal. REI goes after hippie hikers; Gander Mountain is more for hardcore hunters. But there’s overlap in that Venn diagram—both groups need synthetic long underwear to stay warm. I had picked up a pair before I left my family’s weeklong Christmas celebration to head north by myself.

There was no camera crew coming today. Despite my best efforts, I still hadn’t totally convinced the bosses at CBS Sunday Morning that a series of stories on the national parks would be worth airing. There was some understandable concern back in New York that the whole thing “might just end up being a lot of trees.” I’m sure they were also worried that I might be the wrong guy for the job. I was just an occasional freelancer, a pinch hitter infrequently called upon when other, more established correspondents weren’t available.

But they had said they were intrigued, and that was all the encouragement I needed to book my ticket to Maine. I brought along a cheap video camera so I could capture some of my own footage. No trees, I reminded myself. Just people. A few shots of people who—like me—felt compelled to begin their year with an uphill climb in the dark.

Approaching the top, the pavement started to become visible again. I’d forgotten I’d been walking up a road this whole time, but, sure enough, there was a double yellow line, peeking out for the first time underneath the blanket of snow. It didn’t make sense at first; I was much higher up than when I’d started. Shouldn’t there be way more snow up here? But then I figured out what was happening. I felt what was happening.

Powerful gusts of wind whipped at the mountaintop, blowing the snow away and exposing patches of slick ice underneath. The black ice was almost impossible to see in the dark, leading to several stumbles but no outright falls. The traction on my new boots had passed its first test.

When I finally reached the summit, there was no triumphant view to take in. Not yet, anyway—I’d arrived too early. As I jumped up and down to stay warm, I could hear muffled voices coming from somewhere nearby, and I scanned for the source. Eventually, my headlamp reflected off a bright-green parka, and I walked toward a father and son huddling under some rocks to shield themselves from the wind. I asked if I could film them. I knew this was a moment I would want to include—proof that other people started their year this way. That I wasn’t the only crazy one.

Conor Knighton is an Emmy-winning correspondent for CBS Sunday Morning, America's #1 Sunday morning news program. Depending on your cable package, you may have also seen him hosting shows on Current TV, AMC, and The Biography Channel or providing commentary for the likes of MTV, E!, and CNN. He has been to all of America's national parks and what feels like 40 percent of its Hampton Inns.

My Acadia-to-Zion Journey Through Every National Park 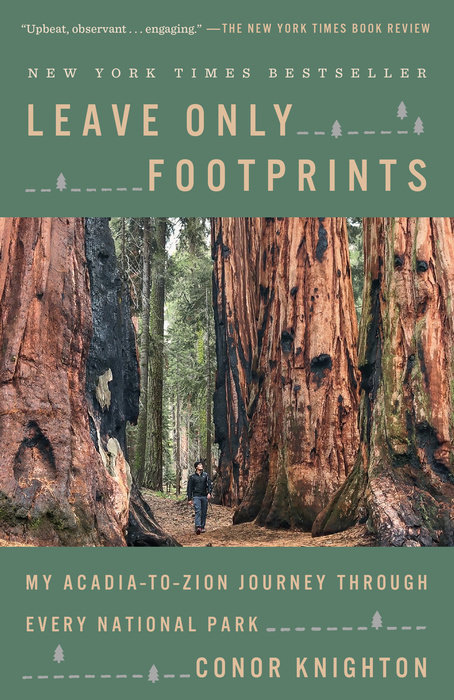