Get Through Fertility Treatment and Get Pregnant without Losing Your Mind

From the author of “Fertility Diary” for the New York Times Motherlode blog comes a reassuring, no-nonsense guide to both the emotional and practical process of trying to get pregnant, written with the smarts, warmth, and honesty of a woman who has been in the trenches.

“A compassionate, often funny, well-researched, and ultimately empowering guide.”—Lori Gottlieb, New York Times bestselling author of Maybe You Should Talk to Someone

There are so many ways to be Not Pregnant: You can be young, old, partnered, or unpartnered. Maybe you have endometriosis. Maybe you don’t have enough eggs or your partner doesn’t have enough sperm. Or maybe there’s nothing wrong except you’re Just. Not. Pregnant.

Amy Klein has been there. Faced with fertility obstacles, she quickly became an expert. After nine rounds of IVF, four miscarriages, three acupuncturists, two rabbis, and one reproductive immunologist, she finally became a mother. And she wrote about it all for the New York Times Motherlode blog in her “Fertility Diary” column.

Now, Amy has written the book she wishes she’d had when she was trying to get pregnant. With advice from medical experts as well as real women, she outlines your options every step of the way, from questions you should ask to advice on getting your mother-in-law to mind her own beeswax. In this comprehensive road map to infertility, you’ll find topics such as:

• whether to freeze your eggs
• finding (and affording) a clinic
• what to expect during your first IVF cycle
• baby envy—aka it’s okay to skip your friend’s shower
• whether the alternative route—acupuncture, herbs, supplements—is for you
• helpful tips, charts, and more!

Empowering, compassionate, and down-to-earth, The Trying Game will show you what to expect when you’re not expecting with heart and humanity when you need it the most.

An excerpt from The Trying Game

Oh Shoot, Am I Infertile?

When my husband and I were trying to have a kid, a lot of people were like, “Oh my God that’s so hot, you guys doing a lot of f*****g?”—Ali Wong, Baby Cobra

You know you’re not expecting if:

a) You only feel “in the mood” about two weeks after your period, hoping that’s when you ovulate.

b) During sex, you start fantasizing about the sperm racing inside you rather than the joystick inside you.

c) You’re counting down the days till your period and for the first time in your panicked life, you desperately hope you don’t get it.

Don’t cry. And don’t panic. That’s probably the best piece of advice I can give you—the one I wish someone had reminded me of every step of the way. “The hard thing about this is that I don’t know if I’m at the beginning, middle, or end,” says Kara, a teacher, who, at thirty-two, spent a few months “casually” trying: having sex every other day after her period ended, not really making a big deal of it. Still she kept getting her period, month after month. “Am I ever going to get pregnant?” she lamented.

Maybe you’re like Kara, and you’ve been kinda sorta trying for a while. Or maybe you’re more like other women, who get that positive pregnancy test only to find themselves bleeding a few days later. That’s what happened to me. A week or so after my wedding, I noticed that I hadn’t gotten my period. Stress, I figured. A few days after that, I popped into a drugstore to buy a pregnancy test or three. Six pink lines later, I was shocked to find I’d tested positive! A few days later, the morning I was supposed to go to the OB/GYN, it was over. Had I not taken the tests, I would have thought it was a very late period.

Many women who aren’t paying attention experience these early misses, called “chemical pregnancies,” and they don’t even know about them. But my doctor confirmed it: I was pregnant, and then I wasn’t.

I wasn’t concerned. Solomon and I took the doctor’s advice and took a month off to go on our planned honeymoon to hike Machu Picchu. (Am I a good wife or what?) The following month, I got pregnant again, another miracle! But that one didn’t stick, either.

That’s when I started going into what Solomon calls “Kitchen Sink Panic,” where you throw everything you ever worried about into this one moment: What if I waited too long? What if we’re going to have fertility problems? Will we have to do IVF? What the heck is IVF anyway? Do we have the money for it? Do we have the patience? The time? What if we never have a baby after all??!! Am I infertile?

I know it’s easier said than done, but try not to spin out of control. Remember: Just because it hasn’t happened yet does not mean that it’s not ever going to happen. It could happen any day now—any moment, actually. One day you’re just going about your business and the next, after a night of passionate (or even practical) lovemaking with your partner, his speedy sperm could be getting ready for a hot blind date with your eggs, booking a room in Hotel l’Uterus for the next ten months.

And so you never know. And maybe that’s the most frustrating thing of all. You never know how long this is going to take. Maybe next week you’ll be like that elated woman in that annoying commercial, where she’s waving around her positive home pregnancy test singing/dancing “I’m pregnnaaant!” Or it may take you a minute. But we don’t know anything just yet, so there’s no need to jump to any dire conclusions.

“My whole life, I thought I was going to be a mom,” says Maria, who was twenty-eight when she got married and twenty-nine when she started Trying—without immediate success. “I have a career I love and care about, but if you grow up so focused on becoming a mom, you want it to happen right away,” she says.

We’ve all been led to believe that conceiving is the easy part. The cheap part. Two bottles of beer and a cigarette afterward. Most of us have spent a good portion of our lives trying not to get pregnant. I thought all you needed was a night of passion (more like an hour), and voilà!—you’d be knocked up.

And you’re not—not yet, anyway. So yeah, it blows.

It sucks that you even have to think about any of this. That you might have to understand how baby-making works, how your own body works (or doesn’t work), and how to get it working in order to have a baby. It all feels so unfair—especially when millions of women around the world can skip this part and go straight to being “Pregnnaaant!”

Consider this though: Some 10 percent of women in America (about 6.1 million) have difficulty getting or staying pregnant, according to the Centers for Disease Control and Prevention (CDC). So you’re not alone, even if it feels that way.

When Trying Is Trying

What the heck does it mean to “try to conceive”? (Acronym Alert: TTC is the first of many acronyms we will find in the fertility community.) I can tell you this: Trying is the opposite of sexy. Sexy is spontaneous, whimsical, free, hot, and passionate. It doesn’t usually include looking at the calendar, counting the days since your last period, and scheduling a rendezvous with your partner according to your ovulation schedule. “Honey, I’m taking my basal body temperature!” does not scream “sexy” the way “I’m so hot for you!” does (although they literally mean the same thing).

“Trying to have a baby turned sex into a have-to instead of a want-to,” says Leena, who started trying at thirty-two and thought it would be easy because her childhood best friend had had no problem. “I’ve never been good at have-tos. It turned sex into broccoli when it should be ice cream.”

At its most basic, trying to get pregnant means having unprotected sex. Let’s just assume that you have that part down correctly. Next, make sure you’ve stopped all birth control, removed all IUDs, and aren’t using any lubes with spermicide, and that your partner has not had a vasectomy. (True story: I met a woman who wasn’t aware her boyfriend had done this!)

Speaking of birth control, don’t worry about the pill ruining your fertility forever. A comprehensive review of seventeen studies in the aptly named journal Contraception showed that pregnancy rates in women one year “after discontinuation of contraception”—both the pill and IUD—“are broadly similar” to those of women who used no contraception at all. (People who took oral contraceptives might have “some delay” in conceiving, another meta-study found, but it’s temporary, “typically limited to the early months following cessation” of birth control.) So give it a couple of months before you start worrying.

After you go off birth control, you can start Trying before your period comes. But you do need to make sure your period returns eventually. It helps to know that your period has returned and is back to its regularly scheduled 28-to- 30-day monthly programming. This is a good indication that you are ovulating—which is a necessary condition for getting pregnant. (Menstruation is not a guarantee of ovulation, which you’ll learn more about in chapter 2.)

“Understanding ovulation is the key to conception,” advises the American Pregnancy Association’s “Essential Guide to Getting Pregnant,” explaining that ovulation is when the ovary releases an egg so it can travel down the fallopian tube and become fertilized by waiting sperm. The uterine wall lining (the endometrium) thickens so that a fertilized egg can implant, and voilà! Pregnancy.

Duh. I always thought I understood the basics of ovulation, menstruation, and conception, but like many women, I didn’t have much of an idea how my body worked. I had no idea that there was only one egg released per cycle—usually from alternating ovaries—and millions of sperm vying to impregnate it (finally, some good odds for women!).

This much I’m sure you know: Women conceive when a man’s sperm fertilizes her egg. When is that, you say? That’s the $100,000 question.

Amy Klein wrote the “Fertility Diary” column for The New York Times’s Motherlode blog for three years. She writes frequently about health and fertility for publications such as Newsweek, Slate, The Washington Post, and others.

Get Through Fertility Treatment and Get Pregnant without Losing Your Mind 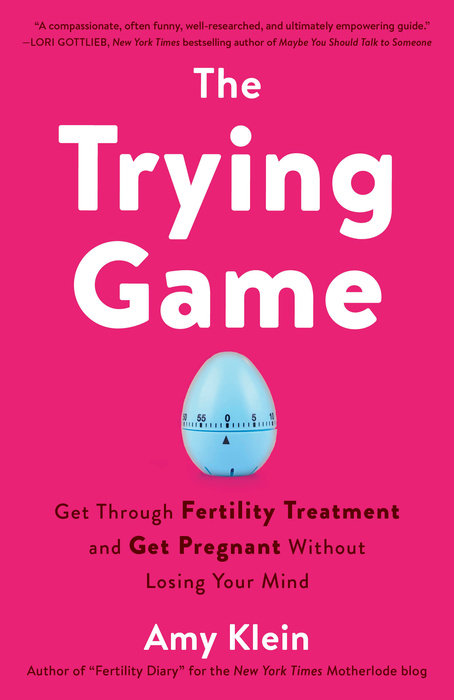