NATIONAL BESTSELLER • The Great Escape for the Great War: the astonishing true story of two World War I prisoners who pulled off one of the most ingenious escapes of all time.

FINALIST FOR THE EDGAR® AWARD • ONE OF THE BEST BOOKS OF THE YEAR: The Washington Post, NPR • “Fox unspools Jones and Hill’s delightfully elaborate scheme in nail-biting episodes that advance like a narrative Rube Goldberg machine.”—The New York Times Book Review

Imprisoned in a remote Turkish POW camp during World War I, having survived a two-month forced march and a terrifying shootout in the desert, two British officers, Harry Jones and Cedric Hill, join forces to bamboozle their iron-fisted captors. To stave off despair and boredom, Jones takes a handmade Ouija board and fakes elaborate séances for his fellow prisoners. Word gets around, and one day an Ottoman official approaches Jones with a query: Could Jones contact the spirit world to find a vast treasure rumored to be buried nearby? Jones, a trained lawyer, and Hill, a brilliant magician, use the Ouija board—and their keen understanding of the psychology of deception—to build a trap for their captors that will ultimately lead them to freedom.

A gripping nonfiction thriller, The Confidence Men is the story of one of the only known con games played for a good cause—and of a profound but unlikely friendship. Had it not been for “the Great War,” Jones, the Oxford-educated son of a British lord, and Hill, a mechanic on an Australian sheep ranch, would never have met. But in pain, loneliness, hunger, and isolation, they formed a powerful emotional and intellectual alliance that saved both of their lives.

Margalit Fox brings her “nose for interesting facts, the ability to construct a taut narrative arc, and a Dickens-level gift for concisely conveying personality” (Kathryn Schulz, New York) to this tale of psychological strategy that is rife with cunning, danger, and moments of high farce that rival anything in Catch-22.

An excerpt from The Confidence Men

For King and Country

There was no barbed wire around Yozgad, nor did there need to be. One of a constellation of World War I prison camps spread over Turkey, it was among the most remote. More than 4,000 feet above sea level, it had been earmarked for incorrigibles—those British officers deemed most likely to escape. The town of Yozgad, in which the camp was set, lay 150 miles south of the Black Sea and 300 miles north of the Mediterranean. The nearest railway station, Angora (present-day Ankara), was five days’ journey by cart through forbidding terrain: jagged mountains round the camp and the Anatolian desert beyond. As a result, Yozgad was considered escape-proof, the Alcatraz of its day.

If an inmate did manage to get out, he would have to contend with the cutthroat brigands, believed to number in the hundreds of thousands, who roamed the surrounding countryside. “A solitary traveller, however well armed, would not have stood a dog’s chance,” Major Edward Sandes, interned at Yozgad, would write in 1924. Men who had fled other camps and been set upon by brigands had been known to beg the nearest Ottoman official they could find to take them back.

But for the British officers at Yozgad, something else precluded escape even more forcibly: On orders of the camp commandant, an attempt by any one of them would bring down severe reprisals—including lockdown, isolation, and even execution—on those who remained, a punitive rite known as strafing. Men of honor, the prisoners swore to one another that they would not flee.

As Eric Williams, who in 1943 escaped from the Stalag-Luft III prison camp in Silesia, would write, “The exhausting . . . march to Yozgad . . . so told on the survivors that once they had settled down the opinion grew among them that it was wrong to escape, that the loss of privileges by those who stayed behind far outweighed the slim chance of the few who might get away.”

Yet some, including Jones and Hill, dreamed of liberty. The question was how to attain it without compromising their countrymen.

The war with the Ottoman Empire has been called the forgotten theater of World War I, yet it was as brutal as anything on the Western Front. It spanned four principal arenas: Mesopotamia, including modern-day Iraq, where Jones was captured; the Sinai Peninsula and Palestine, including present-day Syria, Israel, and Egypt, where Hill was taken prisoner; the Caucasian Front, where the Ottomans fought Russia; and the Turkish Straits, where Allied forces suffered a devastating defeat at Gallipoli in 1915–16.

The Ottoman Empire had entered the war in the autumn of 1914 after allying itself with the Central Powers: Germany and Austria-Hungary. The Allies—including Britain, France, and Russia—formally declared war on Turkey, as the empire was known in Allied shorthand, soon afterward. For Britain, a crucial imperative was to ensure continued access to its oilfields in Persia (present-day Iran), which bordered Mesopotamia. In 1913, the First Lord of the Admiralty, Winston Churchill, had urged the Royal Navy to convert its fleet from coal-burning vessels to oil-fired ones: Oil burned hotter and generated steam faster, affording greater speed. Once the Ottoman Empire joined the conflict, Britain moved swiftly to protect its Persian assets.

“The British attitude and policy towards the Ottomans was a variable mixture of Orientalism and racism, on the one hand, and realpolitik on the other,” the contemporary Turkish historian Yücel Yanıkdağ has written. “From the Ottoman perspective, the Great Powers, including Great Britain, were only interested in carving away the empire.” What was more, he wrote, “the British [viewed] the Ottoman Empire as weak and degenerate [and] underestimated what it would take to defeat it.” T. E. Lawrence, a British Army officer dispatched for a time to Mesopotamia—he would later become renowned as Lawrence of Arabia for his work in the Palestine campaign—called the British operation in Mesopotamia a “blunderland.”

Of all Britain’s campaigns in the region, very likely the most disastrous was the five-month siege and ultimate capitulation at Kut-al-Amara, on the banks of the river Tigris some 200 miles upriver from the Persian Gulf. In April 1916, after a siege of 147 days entailing three unsuccessful relief attempts and 33,000 British casualties, the British surrendered. It was, in the words of one twenty-first-century historian, “arguably . . . Britain’s worst military defeat since the surrender of Cornwallis’s army in 1781 during the American Revolutionary War.” More than 12,000 men were taken prisoner at Kut. Among them was Jones, who with his fellows had endured five months of shot and shell, aerial bombardment, flood, disease, and starvation.

“Harry is home,” Jones’s father would write at war’s end, after his son had come through the siege, the march, two years in Yozgad, and confinement in the madhouse. “He has suffered terribly. I did not think it was possible to suffer so much and live.”

Jones’s journey to Yozgad began in Burma. Elias Henry Jones, familiarly known as Harry or Hal, was born in Aberystwyth, Wales, on September 21, 1883, the eldest of six children of a Welsh father, Sir Henry Jones, and a Scottish mother, the former Annie Walker. Sir Henry (1852–1922), a cobbler’s son who had left school at twelve to work as his father’s apprentice, won a scholarship to Glasgow University in the 1870s and went on to become one of the world’s foremost moral philosophers. He was knighted in 1912.

Harry—“his father’s double in inventive daring,” one of Sir Henry’s biographers would write—spent his boyhood in Wales. In 1891 he moved with his family to Scotland, where his father took a post at the University of St. Andrews. Three years later they settled in Glasgow, where Henry Jones had been awarded a professorship in moral philosophy at the University of Glasgow, a chair once held by the eighteenth-century economic philosopher Adam Smith. But to the end of his life Harry remained deeply invested in his Welsh heritage and was fluent in Welsh, a skill that would help turn the machinery of his confidence game.

Harry graduated from the University of Glasgow, where he studied psychology, along with Greek, Latin, mathematics, and history; after earning a master’s degree from Balliol College, Oxford, he was admitted to practice as a barrister. In 1906, he joined the Colonial Service and was posted to Burma, then an administrative department of British India. Based in Kawkareik, near the Thai border, he worked as a magistrate, overseeing the judicial affairs of a large province.

During these years, Harry’s family would know great loss. His sixteen-year-old brother, Will, described by their father as the most gifted of the Jones children, died in 1906 from appendicitis; in 1910, his sister Jeanie died, at twenty-five, of complications from surgery. Despondent and isolated in the Burmese jungle, Harry became addicted to opium. After several false starts, summoning the resolve that would serve him sublimely in Yozgad, he weaned himself from it. “When I wrote to you . . . the first time . . . I promised you I would never, whatever happened, touch that dreadful drug again,” Jones declared in a letter to the woman he loved, Mair Olwen Evans. “I have kept that promise.”

Visiting Harry in Burma in 1908, Henry Jones sent accounts of the trip to his wife. His letters betray genuine paternal pride (“He is well and strong and full of courage”) and a touch of reflexive paternalism:

Hal is winning the people hand over hand—that is evident. . . . I wish you could see him at this moment. Not in the least conscious of what he is doing, he is sitting on the floor with a fellow-sportsman, a sunburnt, sweaty, dirty old headman from the midst of the jungle. They are chatting away in Burmese like two brothers. The old fellow twenty minutes ago came up, . . . Hal half sternly asking who he is, what he wants, etc. He wants the renewal of his gun licence. “What good did he do with his gun last year, when he had his licence?” He killed two tigers. “With what sort of gun? Where did he shoot them? Would you like to see my gun?” and so on. . . . The old fellow’s face is sun-wearied with much working in the heat on the fields, and his mouth is all red with chewing betel; but these items, no more than the rags, have not the least influence on the mutual and most sudden love of Hal and the old headman.

In 1913, at twenty-nine, Jones married Mair, a daughter of the eminent Welsh bacteriologist Griffith Evans; he had met her when they were both thirteen. “I have loved you since we were boy and girl together,” he would write, “and I love you more with every day that passes.” Photographs of the couple around the time of their marriage depict Mair as demure, dark-haired, and slender; Jones, with his rawboned good looks, deep-set eyes, and long fingers languidly holding a cigarette, has a touch of the dreamy poet about him. After their wedding in Wales, Mair returned with him to Burma; their first child, Jean, was born in December 1914.

Margalit Fox originally trained as a cellist and a linguist before pursuing journalism. As a senior writer in The New York Times’s celebrated Obituary News Department, she wrote the front-page public sendoffs of some of the leading cultural figures of our age. Winner of the William Saroyan Prize for Literature and author of three previous books, Conan Doyle for the Defense, The Riddle of the Labyrinth, and Talking Hands, Fox lives in Manhattan with her husband, the writer and critic George Robinson. 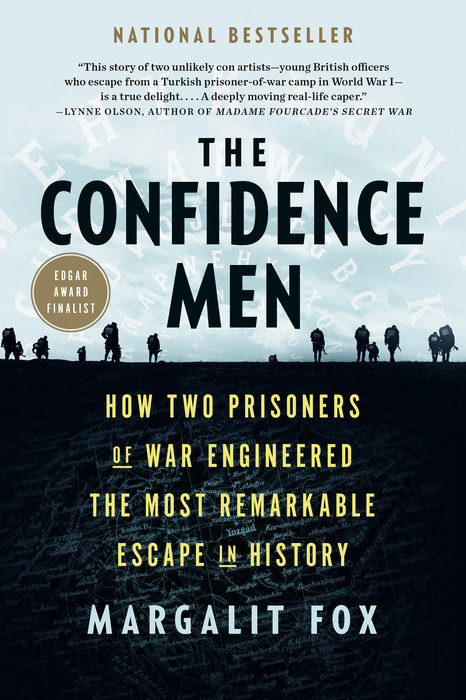