The Story of an Unexpected Friendship and a Beloved Restaurant

A story about the trials and triumphs of a Black chef from Queens, New York, and a White media entrepreneur from Staten Island who built a relationship and a restaurant in the Deep South, hoping to bridge biases and get people talking about race, gender, class, and culture.

NAMED ONE OF THE BEST COOKBOOKS OF THE YEAR BY GARDEN & GUN • “Black, White, and The Grey blew me away.”—David Chang

In this dual memoir, Mashama Bailey and John O. Morisano take turns telling how they went from tentative business partners to dear friends while turning a dilapidated formerly segregated Greyhound bus station into The Grey, now one of the most celebrated restaurants in the country. Recounting the trying process of building their restaurant business, they examine their most painful and joyous times, revealing how they came to understand their differences, recognize their biases, and continuously challenge themselves and each other to be better.

Through it all, Bailey and Morisano display the uncommon vulnerability, humor, and humanity that anchor their relationship, showing how two citizens commit to playing their own small part in advancing equality against a backdrop of racism.

An excerpt from Black, White, and The Grey

I was born in the Bronx, New York, and lived there until I was five years old. My memories as a young child in New York City are faint and overrun by loud car noises, music, and laughter. The comforting smells of incense and cooked food wafted through the marble-floored hallways of our tenement building. I loved how those hallways echoed with the patter of my feet. At that age, I was often carted back and forth to Georgia, where my grandparents lived, so when we moved to Savannah in 1980, being there felt natural to me. I was already familiar with the South. I remembered late-afternoon thunderstorms in the summertime, eating fresh figs off my grandparents’ tree, and drinking sun tea on the neighbors’ back porch.

In Savannah, we lived in the Baldwin Park Neighborhood on East 41 Street, just off Waters Avenue. I remember the neighborhood being diverse. In New York, my whole tiny world had been Black and Brown. But here, I was introduced to the mix of colors, races, classes. and religious backgrounds that filled the homes on our street. I even had a friend from Ethiopia who lived just a few doors down from us. That made Savannah feel worldly. The elderly White lady up the street baked cookies for the neighborhood kids, my best friend, Dee Dee, lived around the corner with her grandparents in a big pink house, and within only a few blocks there were palm dates to eat right from the trees, and dodgeball games to win. There were always children outside playing as the old folks watched from their porches or living room windows. It was a good place to be a kid.

I attended Charles Ellis Elementary and I mostly walked the one mile from home to school. I lived the farthest away of all my friends and as we walked along, our gang grew. We often arrived at school as a group of five or six children. It was a different time and place.

I look back during my childhood years in Savannah as full of firsts: The first time I learned to ride a bike, the first time I saw the ocean, the first time I smoked a cigarette, my first kiss, and the first time I was called “nigger.” It happened just after recess while we were lining up along the outer wall of the cafeteria to head back to our classroom. We were scrambling, bumping, and shoving as children tend to do while forming a line. “STOP IT! QUIT PUSHING! MRS. TURNER!” we screeched over one another. And then, pointing at me, a boy in my class exclaimed, “Mrs. Turner, she pushed me!” But I hadn’t pushed him. We had all been pushing. I didn’t want to say “excuse me” or “sorry” so I explained, “That’s not true. He started it.” And then he countered with, “YOU did, nigger,” lowering his voice for the last word so that only I would hear him. That word stung me like a bee. I knew I was a Black girl and I knew that things didn’t come easily for my family, like buying ice cream whenever I wanted it, but we had nice things and I never before had thought that I should feel bad about my Blackness. That word made me feel small, ugly even. I’d only heard people use the word as a way to demean others so that they could feel bigger, more powerful. I knew he didn’t deserve to skip ahead of me in line and that I would not let him think he was better than me. I didn’t know what to say so I called him the worst word I could think of for a White person, blurting out, “You’re a cracker!” I thought I had shown that boy the ultimate disrespect. And yet I didn’t feel better.

Using elementary school reasoning, I figured if I told an adult they would side with him and I would get a spanking when I got home. I’m not sure why I thought that at the time, but I did. I never said a word—not even to my parents. Did I think he was right after all? Did I think he was better than me? I was ashamed. Ashamed that I had been made to feel bad about my Blackness.

In my home, being Black felt special and unique. We had our own music, foods, speech, traditions, and style. It was hard at times but my parents did their best. They worked and went to school to better themselves for us. For a split second, I had been made to think all that wasn’t good enough. But I knew it was bullshit that my parents worked hard and yet we all endured the judgments of White people, no matter their age.

That moment on the playground changed my perspective. It robbed me of a little bit of joy. I buried those feelings and from that moment on I knew that being Black wasn’t a good thing to everybody. As a child, you don’t feel that type of shame about yourself until someone makes you feel you should—and there’s always someone who will tell you who they think you are.

We moved back to New York City about a year later and, as I grew older, I repressed that moment on the playground and pushed my feelings down even deeper. My world expanded and with so many different colors and cultures in New York City, that playground experience seemed so irrelevant. In a city like New York, you get to see and experience how people turn pain into art, music, and culture and how many cultures influence the environment. But when you live among so many versions of the American experience, figuring out the relationship between Black and White can easily stay in the background.

Now that we were in the North, racism was disguised in a classy suit—all dressed up and yet smelled like wet dog. The reality is that being Black and poor is hard. It is also thankless and often held against us. Fundamental rights and privileges have consistently been denied or taken away from us. In fact, much of our current state in America has been blamed on us and we often don’t know what to do or how to stop the bleeding (start by applying pressure). Black folks have been conditioned to assimilate and keep to themselves. Since returning to Savannah to open The Grey, I have stepped back and looked at how much Black people have influenced all things American, and food is no exception. Racism has been baked into the clay and cast-iron pots of the cooking across this country. It took moving back to Savannah for me to realize that I’d long suppressed those feelings of rage.

Regional cooking is one of the simplest ways to learn about the different parts of a culture. One could even argue that opening a restaurant is a celebration of culture. Restaurants allow people to feel nourished or supported. They also allow someone from outside of the culture to learn or grow through exposure to different ingredients and different preparations of the same ingredients. Restaurants play a big part in changing people’s perspectives. Eating together humanizes. When you are sitting across the table from someone it’s easier to see your similarities than your differences.

Restaurants are woven into the fabric of cities and help provide texture and cultural understanding. In almost any city around the world, you will find the people who have migrated there represented by the themes of local restaurants. But Black folks’ migration to this country was forced. Black peoples’ contributions helped build these cities and provide texture. In spite of all of this, because of slavery, Blacks have adopted American culture as their own. So for me, American cooking and African American cooking are not that different.

With so many restaurants in America and all the different people who have migrated here from around the world, and all of us being exposed to each other’s cultures through food, why is our society so divided? When I decided to move back to Savannah and agreed to start a restaurant with my partner, Johno Morisano, little did I know that our partnership would test this theory. It would test the basic differences in American culture and how we coexist.

We were both committed to the work we had ahead of us. As a prospective business partner, Johno was grounded and focused on his goals. This intrigued me, and I was also interested in his culture, which is Italian American, because Italian food, once considered valueless, is now served in most households and cooked by professionals at every level, from Michelin 3-star fine-dining restaurants to neighborhood pizzerias.

Before Johno and I considered whether we had potential as partners, we asked ourselves and each other, What could we add to the industry? How would our work be different from the same old, same old? I also needed to prove to myself that Black American food is more than what people expect it to be. I wanted to show its value.

The Story of an Unexpected Friendship and a Beloved Restaurant 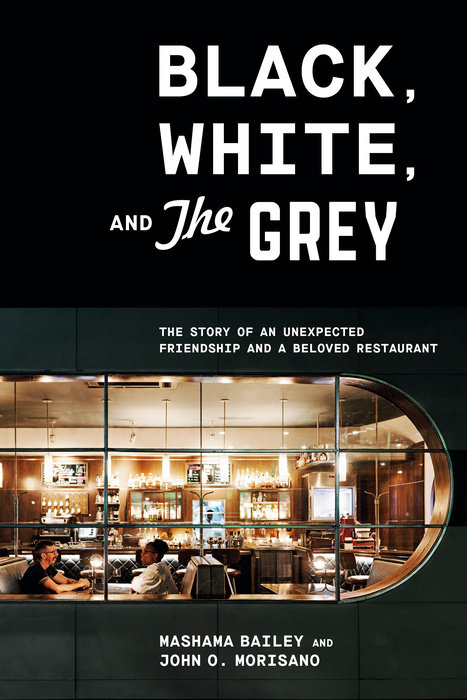