From the Man Booker Prize-winning author of The Finkler Question and J, and one of “our funniest writers alive” (Allison Pearson): a wickedly observed novel of old age and new love.

At the age of ninety-something, Beryl Dusinbery is forgetting everything—including her own children. Her tongue, meanwhile, remains as sharp as ever. She spends her days stitching macabre messages into her needlework and tormenting her two long-suffering carers with tangled stories of her love affairs.

Shimi Carmelli can do up his own buttons, walk without the aid of a frame, and speak without spitting. Among the widows of North London, he’s whispered about as the last of the eligible bachelors. Unlike Beryl, he forgets nothing—especially not the shame of a childhood incident that has hung over him ever since.

There’s very little life remaining for either of them, but perhaps just enough to heal some of the hurt inflicted along the way and find new meaning in what’s left. Could this be their chance to live a little?

Told with Jacobson’s trademark wit and style, Live a Little is equal parts funny, irreverent, and tender—a novel to make you consider all the paths not taken, and whether you could still change course.

Advance praise for Live a Little

“One of the great comic geniuses of our time.”—Lit Hub

“For all of its moments of bleakness, and the occasional flicker of genuine terror, it’s rarely less than bitterly funny in its determination to face up to the obliteration that awaits us all.”—The Guardian

“What a relief to come on a novel which invites you to smile and even laugh.”—The Scotsman

“The novel’s brilliant cover tells it all: hearts and skulls, love and death.”—The Jewish Chronicle

“A thoroughly enjoyable read. For a literature snob and a language obsessive . . . there is a lot to feast on . . . for someone looking for an emotionally honest storyline, the book also delivers. Live a Little is about growing old, but it’s also about gender, race, love and politics.”—Independent

An excerpt from Live a Little

“Words fail me,” the Princess tells her son. She isn’t sure which one.

“Is that what you rang to say?”

She grips the corded telephone receiver as though she means to squeeze the breath from it. She has never touched anything gently in her life.

“No, that’s not the case, Mother.” He too is a strangler, a ​­cost-​­cutter by profession, and chokes a yawn, wanting her to hear the sleep in his voice. “I would never have called you at two in the morning.”

“Don’t exaggerate. It isn’t two in the morning.”

“It feels like two in the morning. And I didn’t ring you. Perhaps I should have, but I didn’t. ​­Anyway—”

“What did you ring to say?”

“Stop showing your vest on television.”

“Whatever it’s called you should do your shirt up.”

“You have more than one.”

“Then which are you?”

He knows she knows.

“Well I didn’t bring any of you up to wear a vest on television,” she says.

“You didn’t bring any of us up to be ​­anarcho-​­syndicalists. My dear brother is making an ideological statement that is entirely his own.”

“By wearing a vest?”

“Yes, now you come to mention it, I remember I was. Pen’s ​­father—​it must have been his father, mustn’t it?—​had a whole wardrobe of vests. I called it his vestiary. He would throw his old ones on the bed and wait for me to wash them. Pen was conceived on a bed of vests, so I suppose I shouldn’t be surprised.”

“There’s no reason for you to be squeamish. You were conceived in the back of a Rolls.”

“I am putting the phone down now if that’s all you rang to say.”

“Don’t you think vests are slovenly?”

“I didn’t ring you to say anything. You rang me.”

But in truth the Princess doesn’t choose to remember who rang whom.

She isn’t a real princess. That’s just a bit of fun she’s having with herself.

The Princess Schweppessodawasser. Her real ​­name—​the name she was born ​­with—​is Beryl Dusinbery. It never suited her to change it for a man. Princess Schweppessodawasser is, she says, her nom d’oubli, after the heroine of One Thousand and One Nights, whose actual name keeps sliding from her memory. Schhh . . . you know who. She had thought the reference might amuse her ​­children—​they are old enough to remember the 1960s advertising ​­campaign—​but nothing amuses her children. They blame her for that. “You never permitted gaiety to enter our lives,” they remind her. “It’s a bit rich you thinking you can play with us now. Frankly, it’s embarrassing. You are the least playful mother who ever lived.”

“In an age of derelictions I brought you up to express yourself correctly. You should be thankful you were born to a teacher and not a scullery maid.”

The Princess commends herself for not saying “You married one.”

“Your ignorance vindicates my system,” she says instead. “As I instructed my pupils in the higher things, so I instructed you.”

“Is that you being playful again?”

“I never pretended to be playful. It’s in the nature of fathers to look after that side of things.”

“Our fathers were never there.”

“That too is in the nature of fathers. But satisfy an old woman’s curiosity. You say I was the least playful mother who ever lived. How many other mothers have you been brought up by?”

“It’s a safe bet no other mother refused to read her children bedtime stories because she found them jejune. You actually used that ​­word—​jejune, for Christ’s sake!”

“I sit in the House of Lords, Mother.”

“You make my point for me.”

“It is also feelings.”

“Feelings! And what are feelings without the words to express them. You grunt until you have the word that tells you what you are grunting about. That’s why pigs don’t experience Weltschmerz or nostalgie de la boue.”

“Because they never mention it.”

“When you grunt out of fear you know you are afraid. We never mentioned we were afraid. But we were.”

“We never had the chance to find out. You put the fear of God in us from the moment we were born. You read us the Brothers Grimm and Struwwelpeter before we went to ​­sleep—​in German.”

“Dich! I still wake screaming in the night because the Great Tall Tailor’s coming to snip, snap, snip my thumbs off.”

“It was necessary to remind you of the dangers the Germans posed. I lost your father to them, remember.”

“That wasn’t my father.”

“They were confusing times.”

“So are these. And you make them even more confusing when you decide suddenly to be ​­light-​­hearted. You brought us up with a heavy hand and we’d prefer you to stay that way. It doesn’t suit you to be coming over all girly suddenly.”

This isn’t the record of an actual conversation with an actual child but the sum of many. Afterwards, her children regretted their harsh words. Mothers leave an oil slick of blame and guilt behind them. Even this mother. Yes, she had much to answer ​­for—​the absence in them of anything approaching a sense of the ridiculous, for one; the absence in their lives of anything approaching a father, for another; the lack of an affectionate interest in one another’s welfare; maybe even their steely drive originated in her. But she was ​­ninety-​­something. You can’t go on blaming your mother. And maybe if they had shown a little more affection to ​­her—​hard to imagine how that would have worked, but still . . .

She can tell when her children are having second thoughts. She senses the retraction coming and puts up a ringed hand to stop it. Snip, snap, snip. The next they’ll be wanting to kiss her. The rings on her fingers, denoting all the hearts she’d stolen and never given back, act as a deterrent. “Ne vous embêtez,” she’ll say, knowing how much her ​­finishing-​­school French exasperates them.

Well, can she blame them?

Can I blame them?

But she retains her unsmiling sense of the absurd. Girly! I have been called many things, but girly!

She wonders if she should take it as a compliment. Standing before a ​­full-​­length mirror, she lets her hair down. The oldest girl in London.

Preposterous. Why, though, does she still have long hair?

The imputation that she might be seeking her children’s favour is not something Beryl Dusinbery can take lying down. She has made mistakes but never the mistake of thinking she can beguile her way into her children’s hearts. She knows her limits.

She pins her hair up again.

I know my limits.

Howard Jacobson has written fifteen novels and seven works of non-fiction. He won the Bollinger Everyman Wodehouse Award in 2000 for The Mighty Walzer and then again in 2013 for Zoo Time. In 2010 he won the Man Booker Prize for The Finkler Question and was also shortlisted for the prize in 2014 for his novel J. He lives in London. 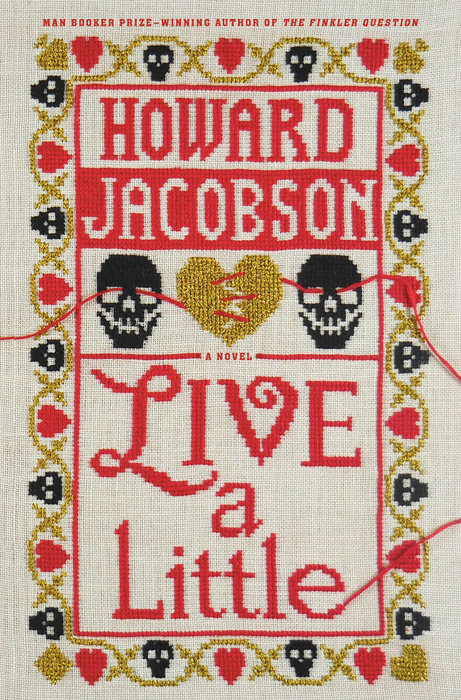