True Tales of the Family Band

The untold story of Willie Nelson and his sister, Bobbie, who, over the course of their lives together, supported each other through personal tragedies and triumphs and forged an unbreakable bond through their shared love of music

Abandoned by their parents as toddlers, Willie and Bobbie Nelson found their love of music almost immediately through their grandparents, who raised them in a small Texas town. Their close relationship—which persists today—is the longest-lasting bond in both their lives.

In alternating chapters, this heartfelt dual memoir weaves together both their stories as they experienced them side by side and apart. The Nelsons share powerful, emotional moments from growing up, playing music in public for the first time, and facing trials in adulthood, as Willie pursued songwriting and Bobbie faced a series of challenging relationships and a musical career that took off only when attitudes about women began to change in Texas. The memoir is Bobbie’s first book, and in it she candidly shares her life story in full for the first time. Her deeply affecting chapters delve into her personal relationships and life as a mother and as a musician with technical skills that even Willie admits surpass his own. In his poignant stories, Willie shares the depth of his bond with his sister, and how that bond carried him through his most troubled moments. Willie and Bobbie have supported each other through unthinkable personal heartbreak, and they’ve always shared in each other’s victories. Through dizzying highs and traumatic lows, spanning almost nine decades of life, Willie and Bobbie have always had each other’s back.

Their story is an inspiring, lyrical statement of how family always finds the way.

An excerpt from Me and Sister Bobbie

Hard to believe that it was sixty years ago I wrote a song called “Funny How Time Slips Away.” Wrote it when I was only twenty-seven, and I really didn’t know what I was talking about. Except I did. As a kid, I was only imagining a romance that had gone sour. As it turned out, my imagination was pretty good. Little did I know that one day I’d wake up and realize I have enough memories to fill a shelf of books. I’ve written a few books before, but there’s one that passed me by. Probably passed me by ’cause the heroine is too humble to demand attention. The heroine is my sister, Bobbie.

Bobbie’s got the best story in our whole family. But to tell it right, I needed Bobbie by my side. I needed Bobbie to tell it herself. It’s our good fortune that Bobbie has agreed. Without my sister, I’d never be where I am today. I’ve always needed her.

I was born restless. Born curious. Born ready to run. And I did. Started running at an early age. Kept running, stumbling, getting back up and running some more. Would have run into complete ruin if it hadn’t been for my first and best friend, Bobbie. If I was the sky, Bobbie was the earth. She grounded me. Two years older, she also protected me.

She was there at the very beginning and remains with me, on and offstage, to this very day. There’s no stronger or longer or steadier relationship in my life. Our stories are intertwined as only sibling stories can be. Many a time she’s mended my broken heart. Many a time I’ve tried to mend hers. In the Nelson family, high drama comes with the territory. Crazy twists and turns began in our childhood and never stopped. Good breaks and bad breaks, triumphs and tragedies.

My bond with Bobbie is a testimony to the healing power of family. Ironically, perhaps, our bond was born out of the collapse of our original family. It could have been devastating, except I was a toddler when it happened. I have no memory of the actual event.

But for Bobbie, it was different.

Willie and I had always lived with Dad’s parents, Alfred and Nancy Nelson. I was not told why. I liked the arrangement because our grandparents were kind and caring. But I was also comforted by the knowledge that my mom and dad lived right next to us. Willie and I saw them every day. My parents rounded out my world. So to see that world fall apart scared me to death.

I was a little girl when my grandparents told me that my mother and father were leaving Abbott, the little Texas town where Willie and I were born. Not only were they leaving us, they were leaving each other. My father had another woman. None of this made sense to me. It just brought on a torrent of fear.

It happened in a flash. There was no preparation. I remember seeing two cars parked outside my grandparents’ house. My mother came in to kiss me goodbye. My dad did the same. All they said was that they were going away. That’s it. Then they were gone.

I was three years old.

I didn’t know about “going away.” No one “went away” in our world. We all stayed in Abbott.

I was hysterical, screaming and crying my little eyes out. I held on to my father’s shirt, held on to my mother’s blouse, held on to both of them so tightly that my grandfather had to drag me away screaming.

He took me to the bedroom I shared with Willie, closed the door, and locked it. The click of the lock was a dagger through my heart. I sobbed until I couldn’t breathe. It didn’t seem right. It wasn’t fair. I had no say-so in the matter. How could that be?

I wept for hours. It felt like life was over.

No mother, no father. It can’t happen just like that.

I can’t remember the words they said. I’m sure they tried to explain, but none of the words mattered. What mattered was that they were leaving, and I knew that nothing would ever be the same.

Willie, only six months old, had been crawling around the house. When he saw me crying, he stopped. He was a happy spirit, but he sensed my panic. He looked at me with worry in his eyes. He’d never seen me break down before, not like this. I picked him up and held him in my arms.

He knew only a few words like “mama” and “dada.”

Now he said something I hadn’t heard before.

“Sister,” he said, though it sounded like itta. As he spoke, he smiled. His smile got to me. I was able to stop crying.

We were isolated. I know that now, but I didn’t know it then.

Abbott, population 400, is a tiny farm community in Hill County halfway between Dallas and Waco. Bobbie was born January 1, 1931, and I made my appearance April 29, 1933. We were babies of the Great Depression. My father’s folks had come to Texas from Arkansas. One of their daughters, Clara, had died young, and their other daughter, Rosa, had moved to Aquilla, close to Abbott. My grandparents, always wanting to be close to their children and grandchildren, followed Rosa to Texas.

My dad, Ira, was a car mechanic. He was also a fiddler and guitarist who played in barrooms on the county line where drinking was legal. Texas was funny like that. In certain counties, booze couldn’t be served, but in other counties it could. Our dad liked to drink. In my growing-up days, most of the men were drinkers. That was normal. Also seemed to be what it meant to be a man. Dad’s drinking never got in the way of my loving him. He was a great guy who just wasn’t ready to be a parent. He and Mom married when they were sixteen. His folks saw that the young couple couldn’t properly take care of Bobbie and me. That’s why my grandparents took us in.

For as long as I can remember, Bobbie and I called them Mama and Daddy Nelson. They anchored us, raised us, and kept us—or at least tried to keep me—on the straight and narrow. They never said a bad word about our mother and father, but I knew that Mama and Daddy Nelson didn’t approve of their son’s drinking. He loved his parents, but he loved his whiskey and he was gonna live his life the way he wanted to. My grandparents didn’t hide their feelings—they warned me about the dangers of drinking—but they also never tried to keep my father away from me or Bobbie. When he moved to Covington, only twenty-five miles from Abbott, he remained part of our lives. Every time he showed up in Abbott, tipsy or sober, we were happy to see him. Our mother went off in a different direction.

I believe my brother’s happy-go-lucky personality stayed happy-go-lucky because he wasn’t traumatized by the shock of our parents’ departure. He was too young to understand what was going on. But the trauma got to me.

Unlike our father, our mother didn’t remain anywhere even remotely close by. As a girl, I was deeply affected. All girls crave their mother’s company. Making the abandonment even more painful was the fact that my mom, Myrle Greenhaw, was an amazing woman. The sound of her sad but sweet singing voice has never left me.

Mother was of Native American heritage, three-quarters Cherokee. Strikingly beautiful, she was also a modern woman. She carried a miniature talisman of the Buddha in her purse. She wore pants, bobbed her hair, dealt cards, loved dancing, and smoked cigarettes—all things Abbott women of that era were not supposed to do. She was fiercely independent. Texans looked at her as a Mexican, and when she moved to Oklahoma she was seen as an Indian. In Abbott, she was scorned for her ethnic appearance.

All this I learned from Mildred, our cousin who lived with us. Mildred was twelve years older than me and very close to our mother. It was Mildred who explained that in our little town Myrle was isolated and considered an outsider. Even if her husband hadn’t fallen for another woman, she may well have wanted to flee a place where she was never accepted.

She went first to Oklahoma and then to San Francisco before finally settling in Oregon. Every year or two she’d take a Greyhound to Abbott for a couple of weeks. Those wonderful visits are etched in my mind. I adored my mother. She had a steely strong personality. She had firm opinions. She was also funny and, like Willie, unpredictable. She possessed a get-up-and-go energy that lit up a room. Her confidence was contagious. She made me feel that women could do whatever they wanted. Social restrictions or taboos didn’t intimidate her.

People have asked whether I was angry because she left us. The answer is no. Maybe that’s because Mama Nelson was all the mother I needed. I did see Myrle Greenhaw as my mom, and I appreciated her. When I later started in with music, she asked me to play for her and praised me to the sky. It would take me many years to realize the positive influence she had on my life. Though I didn’t see her often, I felt her presence even in her absence.

Willie Nelson is an American country music singer-songwriter, as well as an author, poet, actor, and activist. He was inducted into the Country Music Hall of Fame in 1993.

Bobbie Nelson is a pianist, singer, and member of the band Willie Nelson and Family.

David Ritz has collaborated on books with everyone from Ray Charles to Aretha Franklin.

True Tales of the Family Band 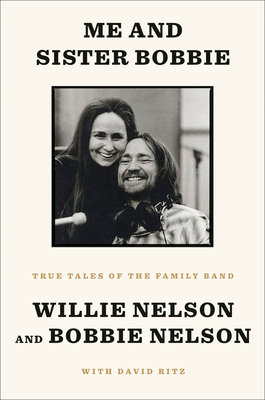