A lonely young woman gets too close to her charismatic female student in this propulsive debut, culminating in a dangerously debauched Midsommar’s Eve.

Lauren Cress teaches writing at a small college outside of Washington, DC. In the classroom, she is poised, smart, and kind, well liked by her students and colleagues. But in her personal life, Lauren is troubled and isolated, still grappling with the sudden death of her parents ten years earlier. She seems to exist at a remove from everyone around her until a new student joins her class: charming, magnetic Siri, who appears to be everything Lauren wishes she could be. They fall headlong into an all-consuming friendship that makes Lauren feel as though she is reclaiming her lost adolescence.

When Siri invites her on a trip home to Sweden for the summer, Lauren impulsively accepts, intrigued by how Siri describes it: green, fresh, and new, everything just thawing out. But once there, Lauren finds herself drawn to Siri’s enigmatic, brooding brother, Magnus. Siri is resentful, and Lauren starts to see a new side of her friend: selfish, reckless, self-destructive, even cruel. On their last night together, Lauren accompanies Siri and her friends on a seaside camping trip to celebrate Midsommar’s Eve, a night when no one sleeps, boundaries blur, and under the light of the unsetting sun, things take a dark turn.

Ultimately, Lauren must acknowledge the truth of what happened with Siri and come to terms with her own tragic past in this gorgeously written, deeply felt debut about the transformative relationships that often come to us when things feel darkest.

Praise for The All-Night Sun

An excerpt from The All-Night Sun

I taught English composition in the international program at Stella Maris, a small Catholic college outside of Washington, D.C. I was a popular teacher. When class started, my show started. I led with a gentle authority I never quite exacted in real life. The students all wanted to be my favorite. No one was ever disrespectful or unprepared. The other professors complained about their problem students, about how out-­of-­control some of them were, but I never had behavior issues in my classroom. I loved my students. They participated, and I graded hard, so they worked hard. They didn’t skip my class. Their writing improved.

It was the first job I ever loved. In front of the class, I was always in the moment, fully theirs and full of movement, completely in my body, hands chalky, sitting atop my desk, laughing at their jokes. Students didn’t depart when I dismissed them. They stayed after to tell me about their childhood bedrooms turned into walk-­in closets, the jobs waiting for them in their family businesses. They would bring me candy from their home countries and want me to try everything right then. They would tell me how empty an accomplishment could feel when those you love aren’t there to see it, to say well done. I knew what they meant by that. A check mark in the margin of their paper, a nod, a smile.

Many of them would write about being new to the country and all the ways they were struggling to fit in. They didn’t realize how much I connected with them, how keenly I felt their descriptions of not having the right words, of not being in on the jokes, of laughing along to something you didn’t understand when laughter was the last thing your homesick heart could bear. Grief can feel like homesickness.

I was just an adjunct, but I thought that having a few hours each day in front of the room, having the students’ rapt interest and respect, made up for some things. I wasn’t liked by several of the other professors in my department. Maybe they thought I was too young, or that I talked too softly, or too fast. I started out liking them very much. The first semester, some would ask me an occasional question, dropping breadcrumbs because they knew I was hungry for conversation. Weren’t you working in the college library before this? How is it that you’re now teaching in the international program? I’d realize, too late, that I was confessing to them parts meant for friends—­a glimmer of connection with a student, a better way to teach something. They brooded. They didn’t like any of my ideas. They didn’t like that I’d never completed my thesis, that I taught at Stella Maris without a PhD.

Was that applause coming from your classroom, Lauren?

Yes, but it wasn’t for me. Someone shared their paper and it moved the others.

Well, of course it wasn’t for you. Do you hear that? She thinks we thought the students were applauding for her. Just close your door, will you? It’s a distraction.

I could have borne it all more easily with one good friend.

It was a wintry January morning when Siri Bergström first came to class early with steaming coffee, one cup in each hand, her portfolio case slung across her back.

I’d noticed her in class. She always sat in the front row, off to my right. When students came in, she would acknowledge each one, sharing a sigh with a girl who also had a long walk from the dormitory, quickly trading notes from a math class with another, always smiling, telling them hej, the other students waving at her, the whole classroom gently tipping in her direction.

“You are so young to be a teacher, right?”

We sat opposite each other in the stillness of my first-­floor classroom. Bright, floor-­to-­ceiling windows met behind her at a sharp glass angle, striped with condensation. We were alone, with just the hum of the radiator and the heat coming off my coffee cup.

“People think that,” I said.

“You write a lot on our essays.”

I looked down at the paper I was grading, at my skinny trail of words winding down the margin. I felt embarrassed.

“I like to read them. They are like whole letters you’re taking time to write,” she continued. “When this class is over, I’m going to save them. Just for what you’ve written down the sides.”

She smiled. I realized she was being earnest. She shook out her hair with her hand and a sprinkle of glitter fell and dusted her desk.

I motioned toward her portfolio case. “What kind of art do you do?”

From her bag, she drew out her compositions: neon paint, glued-­down metal grommets, glitter, and brads. They were sparkling multicolored ovals, like geodes, with enough depth that they looked heavy, about to drop through the desk to the floor. I couldn’t think of the words to convey how their complexity startled me. I noticed a tear toward the bottom of one of the canvases that was filled in with gold.

“Some Japanese artists repair broken pottery with liquid gold. It’s a way to highlight what went wrong, to say a break can make something more valuable or more precious.” She ran her fingertip along the sparkling seam. “It’s the same with people, right?”

“This is just very, very fine gold glitter. But I use it whenever I make a mistake now.”

She stared at my face intently, like she was listening more to the curve of my mouth than my reply.

“You’re wonderful,” I said, and her face lit up.

That’s how it started. In the beginning, that was all it was. She would come to class early and share her compositions with me. I’d fumble for words to compliment them, but mostly I could sense she just wanted me to tell her that she was good. Then she’d slide them back in her big flat bag, and we’d sit together in silence, attending to our work.

It wasn’t much, but I came to look forward to those quiet half-­hour intervals. She seemed to like being around me even when I wasn’t on. And I started to feel, when the others filed in and filled the seats, when the bell rang and I took my position at the front of the room, that Siri was a friend in my corner, rooting for me to do well.

Siri was a sprite. She was freckled, small and thin, with a pair of skinny jeans in every color of the rainbow. Little accent—­she could have been from anywhere. She wore her blond hair short and sometimes dyed it to match her bright pants, but it seemed to me that the way she cared about people made her an old soul. Like she had come from somewhere with the authority to discern goodness in people and had decided there was some in me. I don’t think people knew that I doubted that about myself. I think I appeared like I had it all together. I didn’t.

Siri turned out to be a good writer, though mostly she didn’t understand the purpose of personal essays. None of them did. Often, if my students didn’t know a word in English, they would just write the word in their own language. Siri did it, too. In one of her first essays, she used the word ensam for “lonely,” over and over, as though no English speakers had ever had to express that feeling.

“It may mean the same thing technically,” she said. “But it seems to be missing something. Doesn’t it?”

We started to talk about that word like we were talking about something else. It was all the ways ensam had been defined for her in her lifetime, from her childhood, with her family, and now in the United States without them. For people she had lost, she seemed to want an English word that bore ensam’s same lonesome sound, its own turning-­in, serious-­mouthed hum. I pulled out a thesaurus and read her every English synonym, but it was the sound of her word she wanted, the right to use it and keep it. She told me ensam was the loss of her mother, and that’s when I told her to leave it in.

“How did your mother die?” I asked.

“Nobody knows for sure,” she said with a wave of her hand, a smile again. I knew that gesture, that means of waving things away, that smile to put another person at ease. I nodded. She had found a word that held something for her. I could see why she was protective of it. Both my parents died when I was eighteen. I was an only child without any other family. Without language for it, I’d floated a long time.

No. I’d white-­knuckled it. And scrambled, and cried, and ruined my chances, and lost myself. But when I look back, it felt like floating, because before then I’d been so rooted.

Diane Zinna is originally from Long Island, New York. She received her MFA from the University of Florida and has taught writing workshops for more than a decade. She formerly worked at AWP, the Association of Writers & Writing Programs, and in 2014, Diane created the Writer to Writer Mentorship Program, helping to match more than six hundred writers over twelve seasons. Diane has become well-known for her popular, online grief writing sessions that have grown each Sunday since the start of the pandemic. Diane lives in Fairfax, Virginia, with her husband and daughter. The All-Night Sun is her first novel. 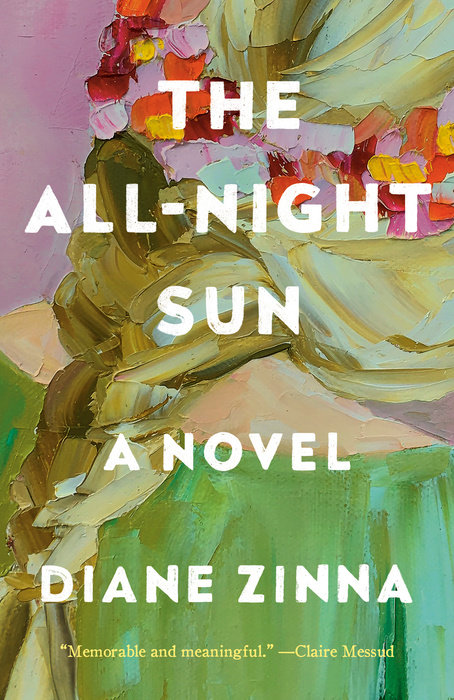