“Bangkok is the star of this accomplished novel. Its denizens are aliens to themselves, glittering on the horizon of their own lives, moving—restless and rootless and afraid—though a cityscape that has more stories than they know.”—Hilary Mantel, Booker Prize–winning author of Wolf Hall and Bring Up the Bodies

Escaping New York for the anonymity of Bangkok, Sarah Mullins arrives in Thailand on the lam with nothing more than a suitcase of purloined money. Her plan is to lie low and map out her next move in a high-end apartment complex called the Kingdom, whose glass-fronted façade boasts views of the bustling city and glimpses into the vast honeycomb of lives within.

It is not long before she meets the alluring Mali doing laps in the apartment pool, a fellow tenant determined to bring the quiet American out of her shell. An invitation to Mali’s weekly poker nights follows, and—fueled by shots of yadong, good food, and gossip—Sarah soon falls in with the Kingdom’s glamorous circle of ex-pat women.

But as political chaos erupts on the streets below and attempted uprisings wrack the city, tensions tighten within the gilded compound. When the violence outside begins to invade the Kingdom in a series of strange disappearances, the residents are thrown into suspicion: both of the world beyond their windows and of one another. And under the constant surveillance of the building’s watchful inhabitants, Sarah’s safe haven begins to feel like a snare.

From a master of atmosphere and mood, The Glass Kingdom is a brilliantly unsettling story of civil and psychological unrest, and an enthralling study of karma and human greed.

An excerpt from The Glass Kingdom

On the upper floors of the Kingdom, as the first winds of the monsoon picked up, the rains swept in just before first light. The cannons of a storm sounded in the distance. In Sarah’s apartment, where she kept the tall sliding windows open, she felt the gusts even in her sleep, the geckos hunting on her walls scattering, moving toward the ceiling and its deeper shadow. She dreamed that she was swimming in an indoor pool back in New York, at the old YWCA near Fifty-Third Street, alone and chilled, until a siren wailed in the distance and the pool disintegrated. Her eyes opened, the equator returned, and the sweat on her back failed to dry. She panicked for a moment and felt for the edge of her mattress to situate herself. What day was it? Koel birds called out across the city, whooping laments, and at once she remembered the waste lots of jungle below her windows with their listing flame trees alongside the ruined tobacco warehouses that had stood there since the Japanese occupation. A faint hum came from the stormy Saen Saep Canal nearby, its black water churning with dawn commuter boats. She was alone among the flies, and the moon was still high above the dirty white skyscrapers of Bangkok.

The construction sites that surrounded the Kingdom had not yet stirred to life. But now storklike figures in gumboots picked their way through the pools, squatting under awnings and smoking their morning pipes while rain collected in the cement craters around them. They seemed to work night and day, dark Khmer men in chams who sometimes came out into the stifling air and looked across at the aristocrats in their vertical kingdom. There was nothing in their eyes, no recognition, just as she imagined there was nothing in hers. She drank a pot of French press coffee at her garden table and heated up half a defrosted croissant. The hour before six a.m. was the only time of the day when she felt safe, the hour she imagined when even the policemen here slept for a brief interlude, distracted from their own enormous indifference to crimes and punishments.

Gradually, the first low rays hit the hundreds of towers. In the gardens fifteen floors below, the maids had emerged with their carpet beaters. The villas lay all around her, with their high walls and fan palms, and in a sheltered pool within one of them an old woman lay on her back with a small dog on her stomach, a virtuoso balancing act. The sluggish fountains came back to life, breakfast was served in summerhouses, and men in black suits departed in limousines. She had chosen her spot carefully. It was a corner of upper-­class affluence hidden within a forgotten ruin.

She had been in her new apartment for a few days and had purposely met no one, apart from the eccentric Thai grandee who was her landlady, Mrs. Lim. It was how Sarah wanted to keep it. Most of the seven rooms in her apartment were still unfurnished and did not yet feel familiar. In the sitting room her three suitcases still lay open on the floor, clothes spilling out of them. She was too listless to unpack them properly, and was still uncertain whether she might have to decamp as suddenly as she had arrived. Therefore she left the cotton blinds permanently down against both the sun and other tenants. Inside, there were parquet floors and a long kitchen like a ship’s galley with a chessboard floor and an American fridge with steel doors. There was a feeling of estrangement and isolation about it, though the previous tenant had been a Thai designer who had painted all the walls ocher and dark green, which might have been colors of luck and fortunate karma for all she knew. The cabinets were made of old teak, a wood now illegal, and there was a stained-­glass window in the kitchen. Now that she thought about it, she was fortunate that the class-­conscious landlady had not asked to see a passport. She had impressed Mrs. Lim with her aura of good breeding, and it appeared that the august American name Talbot rang a little silver bell even here. In reality, she had chosen the name Sarah Talbot Jennings merely to be forgettable.

Each morning began with an idle swim in the shared pool. For this she went down in the elevator in her swimsuit and a bathrobe, wearing spa slippers and carrying a thermos of more freshly brewed coffee. But before that, and facing her bathroom mirror, she pulled her newly dyed white-­blond hair up into a tight ponytail, and inserted the colored contacts that changed her eyes from green to blue. She had found them in a Thai supermarket, a line called Alcon FreshLook. It was not a complicated operation, and she was learning to do it a little faster every day. When she was done, she put on her bathing suit and calculated all the moves she would make that day. Mere repetitions calculated to pass the time, to make her appear ordinary, because an unplanned day is more difficult to organize than a planned one. Since she had no job, it was an unexpectedly difficult problem she had to solve anew every morning. She was in the city purely to make herself invisible for a while, to turn herself into a living ghost in one of the few places where a solitary white woman would be little noticed, sexually or otherwise. When eventually the day was completely mapped out in her head, she sortied out in her bathrobe with her thermos and stepped onto her private landing, where the elevator awaited.

The Kingdom consisted of four towers, each with twenty-one floors, each connected to the others by closed-­off landings whose glass doors could be opened only with the security key each tenant possessed. They were thus entirely private. The first and second floors of the building, however, were public spaces. On the lower of these two floors was a replica of a French formal garden, with shrubberies dying in the heat and two-­story villas around it, a grander form of lodging offered by the Kingdom. The patios were filled with Chinese lions and plaster Germanic milkmaids with wide-­brimmed bonnets pinned onto walls of plastic ivy.

A flight of steps connected the decaying garden with a large pool on the floor above it, itself surrounded by trellises of untamed foliage and Chinese box trees with their aroma of crushed almonds, looking out over abandoned tobacco warehouses. This kind of building had once been fashionable. It was a long-­outmoded idea of luxurious living built in the heady days of the early ’90s, the Asian boom that had come and gone and come back again. Now-­bankrupt tycoons had built European-­style fantasies up and down the street, with turrets, portcullises, and topiary, but they had faded and peeled in a heat that didn’t suit them. The little canals, the klongs, which once gave the illusion of lordly moats, had filled with toxins and monitor lizards.

In the elevator Sarah found herself reflected in a full-­length mirror. She glanced up at the security camera in the corner, knowing that the men at reception were watching her at all times, and as she did the camera’s eye seemed to blink. On the fourth floor, a middle-­aged woman dressed in a housecoat and slippers got in with her Pomeranian, and in an instant the elevator was claustrophobic. The woman, unable to speak English, had one hand gripped around a leash studded with glass diamonds. The elevator doors at last opened to the first floor, where Burmese maids were already gathered with their masters’ own little Pomeranians and toy poodles. There was a sound of carpets being beaten in the surrounding obscurity. Sarah walked past them, climbed the single flight of steps up to the pool, and slipped into the water.

The children had not yet arrived with their inflatable dolphins and flamingos, and the maids high up in the windows paused to stare down at the white girl resting in the shallows. How did she appear to them? As she looked back at them that morning, another early-­morning swimmer made her way toward the pool. A woman of about Sarah’s age, thirty more or less, in the black one-­piece of a serious amateur lap racer. The newcomer didn’t even notice Sarah at first and was under the trellis, throwing aside her towel, when she finally did so. She had not yet drawn her goggles down over her eyes when a brief smile came to her lips, and she wished Sarah a good morning. She was Thai or Eurasian; it was hard to tell, though there was little that was European about her.

Sarah returned the greeting. She then edged away to give herself a little more space. The woman positioned herself carefully, delicately self-­conscious, and then sprang into a slick front crawl that propelled her to the far side of the pool in seconds. She did ten laps before she stopped at the shallow end, whereupon she raised her goggles and looked over at Sarah.

“Did I disturb you?”

She spoke in British-­inflected English, the accent regionally indistinct. Instinctively, Sarah decided that she was wholly Thai after all. She had learned her English at a good school, that was all.

“Me? No. I’m not really here to swim. I just come to cool off and waste time.” 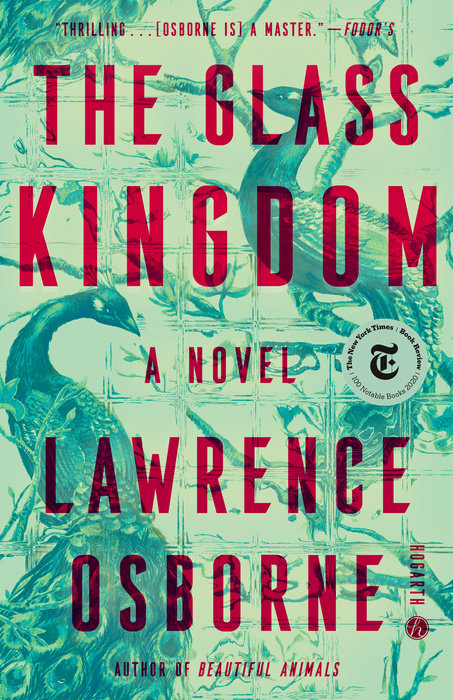