Margaret Weis and Tracy Hickman return to the unforgettable world of the New York Times bestselling Dragonlance series as a new heroine—desperate to restore her beloved father to life—sets off on a quest to change time.

“I love Dragonlance and I love Margaret Weis and Tracy Hickman. Plain and simple. Their books are my favorite fantasy series of all time.”—Joe Manganiello

Destina Rosethorn—as her name implies—believes herself to be a favored child of destiny. But when her father dies in the War of the Lance, she watches her carefully constructed world come crashing down. She loses not only her beloved father but also the legacy he has left her: the family lands and castle. To save her father, she hatches a bold plan—to go back in time and prevent his death.

First, she has to secure the Device of Time Journeying, last known to be in the possession of the spirited kender Tasslehoff Burrfoot. But to change time, she’ll need another magical artifact—the most powerful and dangerous artifact ever created. Destina’s quest takes her from the dwarven kingdom of Thorbardin to the town of Solace and beyond, setting in motion a chain of disastrous events that threaten to divert the course of the River of Time, alter the past, and forever change the future.

An excerpt from Dragons of Deceit

Destina joined her father and mother in the solar after the midday meal. The solar was the most pleasant room in the castle, for the afternoon sun shone through the numerous windows, lighting it and filling it with warmth.

Atieno was in particularly good spirits. Among her people, a girl attained womanhood at the age of fifteen.

Gregory joined them, bearing a wooden box containing his gift. He grew more cheerful, as he always did when he was in his wife’s presence. He kissed her and wished her joy of the day she had given him his daughter, his happiness.

“What is my gift, Mama?” Destina asked.

Destina was not to be lured into more discussion of gods that did not exist. She hung the chain around her neck and thanked her mother.

Gregory presented his daughter with his gift: a silver chalice decorated with a kingfisher motif. The kingfisher bird, with its bright blue-sky and orange-fire plumage, had been chosen as the mascot for the knights by Vinus Solamnus, their founder. The kingfisher symbolized courage and hope, for it was said that on the day of the creation of the world, the bold kingfisher was the first bird who dared to take flight.

“Papa, thank you! This is beautiful.” Destina flung her arms around her father’s neck and kissed him.

Gregory embraced her and then poured wine for himself and his wife to celebrate.

“Please, Papa, just a little for me in my new chalice?” Destina begged. “After all, Mama says that I am a woman today.”

She held out the chalice, and Gregory poured several swallows of red wine from the pitcher into the cup. Gregory and Atieno drank a toast to their daughter. Destina replied with thanks to her parents for giving her life and sipped the wine, admiring the chalice as she did so, turning it around and around in her hand. When she had finished, she handed the cup to her mother.

“You must tell my future in the dregs, Mama,” Destina said.

Atieno gazed into the chalice where the lees had sunk to the bottom.

“What do you see, Mama?” Destina asked.

To her astonishment, Atieno gave a cry of horror and flung the chalice away from her. The silver cup hit the stone floor with a resounding clang and rolled beneath a chest.

Atieno made a warding gesture with her hand and muttered a few words that Destina did not understand and presumed were what her mother termed “magic.” Atieno then jumped from her chair and ran from the room.

Gregory stared after her in concern. “What is wrong with your mother? What did she say?”

“It seems Mama saw a bad omen in the dregs, and I believe she spoke a magic charm to ward off evil.”

“What was the omen about?” Gregory asked.

She went in search of her mother and found Atieno at the window in her bedchamber, gazing out at the bright blue sky above and burnished orange leaves below.

“Come look at the lovely colors, Destina. They are the colors of the kingfisher. Blue above and orange beneath.”

Destina was not interested in kingfishers or the colors of autumn. The Measure prohibited the belief in omens and portents, and Destina tried to obey, but she had so many questions and not one of the thirty-seven volumes of the Measure could answer them.

Atieno continued to gaze out the window. Destina saw tears on her mother’s cheeks, and she grew even more frightened. Destina had never in her life seen her mother cry.

“Mama, what did you see in the dregs?” Destina demanded.

“How can we face what is coming?” Atineo asked. “How can we bear it?”

She turned to face Destina and said softly, “My poor child . . .”

Destina took refuge in the Measure. “Mama, remember what the Measure says: ‘Paladine forges the sword, but man chooses how to wield it.’ That means each person is responsible for what he or she does in this life. The Measure also warns: ‘Trust not the soothsayer, for his words are lies to snare the unwary.’”

“And my people say: ‘The wolf is born to kill. The sheep is born to be killed,’” Atieno said, fixing her with shimmering dark eyes.

“Mama, please tell me what you saw in the chalice!” Destina said desperately.

“Bring the chalice to me,” said Atieno. “I will show you.”

Destina hurried to the solar to fetch the chalice. She had to get down on her hands and knees to retrieve it from beneath a chest. She returned to her mother and held it out to her.

Atieno recoiled, refusing to touch it.

“Look into it, Daughter, and tell me what you see.”

“Mother, you know I never see anything except dregs,” Destina protested.

“If you see, look!” Atieno insisted.

Destina sighed and peered into the cup, and this time she saw that the dregs had formed a recognizable pattern. She laughed and said before she thought, “Isn’t that funny, Mama. The lees are in the shape of a dragon. See, here is the tail and the head and the wings . . .”

She heard a strangled gasp and looked up at her mother. The blood had drained from Atieno’s face and lips, leaving her brown skin gray and leaden. “You saw the dragon! The same omen. I hoped I might be wrong, but you confirm it!”

“Mama, you are frightening me,” said Destina. “I saw the shape of a dragon. These are nothing but lees, the dregs, dead yeast. Here, I will show you!”

She dipped her index finger into the chalice and ran it around the inside. The dragon disappeared, staining her finger red. Destina lifted her finger to show her mother.

“There, Mama. You need not worry. The dead yeast is gone and so is the dragon.”

Atieno stared in horror at the red blotch on Destina’s finger. Then she sank into a chair, looking so ill that Destina shouted for her father.

Margaret Weis and Tracy Hickman published their first novel in the Dragonlance Chronicles series, Dragons of Autumn Twilight, in 1984. More than thirty-five years later, they have collaborated on more than thirty novels together in many different fantasy worlds. Hickman is currently working with his son, Curtis Hickman, for The VOID, creating stories and designs for whole-body, fully immersive VR experiences. Weis teaches the competitive dog racing sport flyball. She and Hickman are working on future novels in this series.

Margaret Weis and Tracy Hickman published their first novel in the Dragonlance Chronicles series, Dragons of Autumn Twilight, in 1984. More than thirty-five years later, they have collaborated on more than thirty novels together in many different fantasy worlds. Hickman is currently working with his son, Curtis Hickman, for The VOID, creating stories and designs for whole-body, fully immersive VR experience. Weis teaches the competitive dog racing sport flyball. She and Hickman are working on future novels in this series. 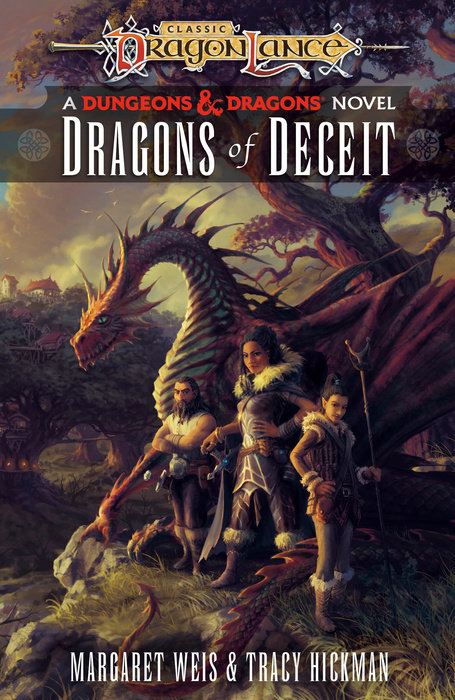