A sophisticated and conversation-starting novel of modern love, sexual violence, and toxic inheritance from a brilliant new literary voice

When Kate Quaile meets Max Rippon in the first week of university, so begins a life-changing friendship.

Over the next four years, the two become inseparable. For him, she breaks her solitude; for her, he leaves his busy circles behind. But knowing Max means knowing his family: the wealthy Rippons, all generosity, social ease, and quiet repression. Theirs is a very different world from Kate’s own upbringing, and yet she finds herself quickly drawn into their gilded lives, and the secrets that lie beneath. Until one evening, at the Rippons home, just after graduation, her life is shattered apart in a bedroom while a party goes on downstairs.

What Red Was is an incisive and mesmerizing novel about power, privilege, and consent—one that fearlessly explores the effects of trauma on the mind and body of a young woman, the tyrannies of memory, the sacrifices involved in staying silent, and the courage in speaking out. And when Kate does, it raises this urgent question: Whose story is it now?

Praise for What Red Was

“Dazzling. . .  This is a book that succeeds in prying open our cultural moment and laying it bare for scrutiny.”—Alexandra Kleeman, author of You Too Can Have a Body Like Mine

“One of the best books I’ve ever read about female rage and transgression . . . at once incredibly timely and one for the ages.”—Lisa Gabriele, author of The Winters

“So assured, so confident in its voice, so skilful in its plotting and characterisation that it seems like the work of a seasoned author . . .  an exciting new voice.”—The Guardian (UK)

“Powerful… handles its explosive plot with an admirable delicacy”—Publishers Weekly

“Thoughtful and observant…Price is a novelist worth watching.” —Kirkus

“A confident and provocative study of wealth, sexual violence, and complicated friendships . . . [What Red Was] is a strong debut by an incredibly young author, an assured and challenging novel that suggests an incipient talent worthy of notice.”—The Irish Times

An excerpt from What Red Was

Kate was sleeping when he knocked on her door. It was early, not yet six, and the sound of banging continued until she was out of bed. She glanced in the mirror over the basin as she passed: her skin was paler than usual, puffy from the cheap wine she had been drinking in her room the night before. The banging started again and Kate pulled the door open. Standing outside was a boy wearing only a towel, his skin still wet from the shower.

“I mean, it is the middle of the night,” Kate said. She didn’t recognize him, but if he lived in this building then he must also be in his first year. “What time is it?”

“A comedian,” said Kate drily. But she kept her foot on the door so it wouldn’t swing shut.

The boy’s name was Max and he’d locked himself out of his room when he’d gone for a shower. He came inside, letting the door slam behind him and adjusting his towel.

“Do you think you could go and get the master key for me?” he said. “It’s just I can’t walk across college in a towel. I’ll frighten the tourists.”

“Why are you up so early?” Kate said, ignoring his request. “I thought lectures didn’t start until tomorrow.”

Kate was annoyed by the disappointment she felt; she tried for a playful tone to disguise it. “How about I lend you some clothes?”

Max shrugged. “I’m comfortable with my masculinity,” he said. “Let’s do it.”

Kate gave him a pair of black jeans and a hoodie, looking at her phone while he changed. “What are you studying?” she said.

“Languages.” Max had gone to her shelf, and was examining the books she had taken all summer to read. They barely seemed to occupy any space. “Same as you. Don’t bother with this, it’s bullshit.”

Kate glanced up at the book he was holding out to her.

“I’ve read it already,” she said. “And it’s not. Some of it’s feminism. You have to wash those jeans before you give them back to me, by the way.”

Max shoved his hands in the pockets and grinned. Her jeans were way too short for him.

After he left, Kate got back into bed but she couldn’t sleep. Now he wouldn’t come back straightaway to return the jeans. She hadn’t asked which room he was in, or what time he was leaving for their first French lecture the next morning. In the whole of her long first week at university he was the first person who’d been in her bedroom. Lying there she was aware—as she had been on the day she’d moved in—of the silence of her building, the empty corridors, the sense of new lives beginning elsewhere. Her room, with its wide windows, felt vast and strange compared with her bedroom at home.

That first day Kate had overheard a mother telling her daughter that these halls had been built in the 1960s when the more elite universities were made to widen their access. Walking behind them, dragging her suitcase, she’d caught a glimpse of the girl’s profile and wondered if she was living near her; perhaps she would come to her room later, they’d go together to the bar. But then her mother steered her through an archway into the next court and toward the river, where Kate had since discovered the majority of her year were living, in the older accommodation blocks with their winding stone staircases and creeping ivy.

Kate rolled over: she needed to get up and have a shower. She’d been avoiding the canteen but wondered whether she might find Max there. She heard another knock on the door, a light tap this time. It was him, wearing a soft black jumper and his own jeans, his dark hair almost dry.

Kate frowned. “How do you know my name?”

“It’s above the door.” Max pointed up at the door frame, and Kate saw that on the little finger of his right hand he wore a gold ring. “So,” he said, smiling brightly. “What shall we have for breakfast? I’m paying. To apologize for waking you up.”

The following morning he came past on his way to their first lecture and banged on her door until she let him in. She’d only just got up, but he didn’t mind that she made him late, showering and then sitting on the floor in the patch of sunlight under her window to put on her makeup. He sat at her desk playing tinny music through her laptop, and came by the following day, and the next. As they walked together Kate observed that he spoke in tangents, so that whenever she asked him a question he would always take the conversation elsewhere without answering her. Other students were always stopping to talk to him, and she soon came to realize that she would not have him to herself for long: he was never alone, always busy, on his way to meet an old school friend or girlfriend. He seemed to know everyone. But she began to listen out for the sound of him bounding up the stairs two at a time to slump in the armchair at the end of her bed, drunk or high and filled with gleeful loathing for the people he’d spent his evening with. On those nights, they would talk until Kate fell asleep, at which point Max would leave, slipping softly from her room. Sometimes, when the door shut behind him, she briefly woke, and wondered if she had dreamt that he’d been there.

A few weeks into term, after the summer had given way to autumn, Kate felt her sense of loneliness begin to lift. It was not so hard, now, to make other friends; she was starting to feel more confident. But when she went out without Max she had to check herself, in case she referred to him too often in conversation, or became preoccupied by the texts that would arrive from him in intermittent bursts, wanting to know where she was and what she was doing. On one such evening, Max had found her just before midnight sitting outside a kebab shop in the center of town, delicately dissecting her lamb shish. She had been coerced into a night of structured drinking with the other students on her floor, and had managed to give them the slip during the migration from bar to club. Max crouched down beside her.

“This is almost inedible,” said Kate, her mouth full, offering him a plastic fork.

They took the kebab back to Kate’s room where she placed it on her shelf next to her cereal: her head was swimming and she was already anticipating a difficult breakfast. Max sat up on the windowsill, pushing the window half open to the cool night air. At the time he was refusing to listen to anything except a single Frank Ocean song, which he started to play now; Kate took his phone from his hand and connected it to her speaker. Max rolled a cigarette.

“You know, a bouncer told me to ‘get to f***’ tonight,” he said. “It’s been so long since anybody has told me to actually get to f***.” He sounded almost wistful.

Kate tried to focus. “Why did he say that?”

“I don’t know. I was trying to help with his queueing system. Streamlining it.”

“Obviously. Otherwise I wouldn’t have had to let people in the side door.”

Kate lifted herself up onto the sill beside him and took his cigarette between her fingers. She was really drunk, she realized, only hazily aware of the window latch digging into her back as she leaned against the frame.

Max sighed. “This is always the best part of the night, anyway,” he said. “I don’t know why we ever go out.”

“You should have followed my lead.” Kate blew smoke out of the window and turned toward him as she did so. “If you’d stayed in quarantine for the first fortnight you wouldn’t be stuck with so many friends.”

“I know,” Max said. “I have no one to blame but my abundant charisma.”

“Nothing to blame, not no one. Charisma isn’t a person.” Kate was slurring assertively. The cigarette had made her light-headed.

“It is when it’s this abundant,” Max said, as she started to clamber back down. “What are you doing?”

“Getting ready to go clubbing,” Kate said, crawling under her covers.

ROSIE PRICE grew up in Gloucestershire and then read English at Cambridge. She worked for three years as an assistant at a literary agency before leaving to focus on her own writing. She lives in London. 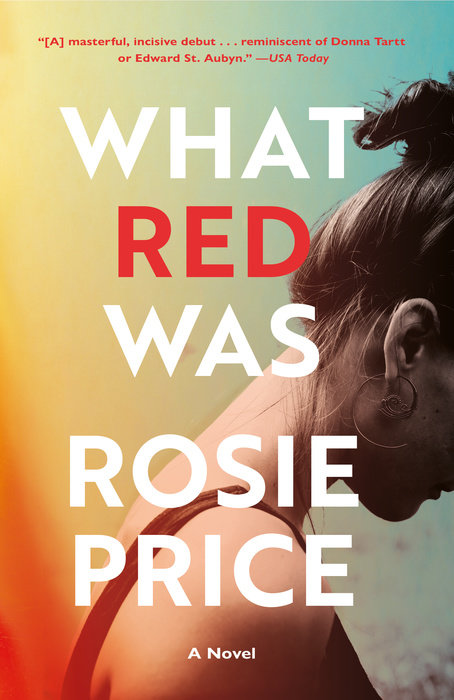