A simple, targeted diet plan that balances your plate to reduce inflammation and help you get healthy, from celebrity trainer Erin Oprea.

“Erin has turned the idea of health into something that doesn’t feel boring or depriving, but rather something that helps me be a better human and artist.”—Kelsea Ballerini, singer-songwriter

After publishing her popular diet and exercise book The 4 x 4 Diet, Erin Oprea discovered the link between food and inflammation and the huge impact it has on our bodies. Chronic inflammation can lead to inflamed fat cells that are unable to release fat and produce unhealthy levels of hormones, causing weight gain. Foods like sugar, vegetable oil, refined flour, grain-fed meats, seed oils, and dairy products are often the true culprits of inflammation. The good news is that by prioritizing clean foods like lean proteins, omega-3 fats, healthy carbs, and antioxidant-rich veggies in your diet, you can reverse the damage and shed the weight. In The Power Plate Diet, you'll be able to cool inflammation by removing reactive foods and combining the healthiest proteins, carbs, and fats for the most powerful plate possible.

Using a few simple guidelines, you have the freedom to make your plates as creative as you'd like with nutrient-dense foods that keep your body free of inflammation. The Power Plate Diet includes a four-week meal plan, tips and tricks like carb substitutes and diet boosters (such as beet juice!), and the exercises and lifestyle principles that work for Erin and her clients. With a balanced, effective approach to diet and exercise, you'll eat clean and fat-proof your body for a healthier, trimmer you.

An excerpt from The Power Plate Diet

Let me sum up what Power Plates will do for you: fat-proof your body.

A fat-proofed body is one that easily burns fat, including belly fat, and is resistant to gaining or regaining fat pounds. You might say that a fat-proofed body operates like that of your naturally fit friends. We all have them—people who share a combination of traits such as a fast metabolism, a modest appetite, great blood sugar control, and a smaller tummy size. You are about to join their ranks.

How is this possible? Basically, Power Plates reprogram your fat cells so that you burn fat, day in and day out. You keep losing inches and pounds right down to your ideal shape and weight, without the plateaus you’ve experienced on other diets. This happens because you’ll be healing your fat cells so that they burn off stored fat the way they’re supposed to. The more you fat-proof your body, the more easily excess pounds will melt off. You’ll feel and look so much lighter and have an absurd amount of energy.

The Secret Life of Fat Cells

When you see your naked reflection in the mirror, you’re looking at a mix of cells. Many of them are fat cells, sandwiched between skin and muscle cells. We have approximately seventy-five billion fat cells. When healthy and operating like they should, they are about the size of a period at the end of a sentence.

Under a microscope, a fat cell resembles a fried egg on top of a beach ball of fat. Most of the cell’s bulk is triglycerides, a fat that’s chemically similar to diesel fuel. The remaining non-fat part of the cell includes organelles involved in metabolism—the body’s food-to-fuel process.

Fat cells used to be thought of as an inactive, jiggly mass that took up space and made our waistline expand. But now we know that fat tissue is far more active and has important jobs in the body. For one thing, fat is the largest endocrine (hormone-producing) organ in the body. It sends out messages via hormones to the brain and other parts of the body that have to do with hunger and appetite. For example, healthy fat triggers weight-control hormones, such as leptin, to tell your brain that you’ve had enough food.

Normal fat cells are used by the body to store energy—in some cases for several months at a time. The energy you’ll use to do my exercise routine today may be coming from that cheeseburger you ate two months ago. Every excess calorie that your body does not burn up is kept in the fat cells—even the calories from celery or carrots.

It’s not the number of fat cells that dictates your weight; it’s their size, which can fluctuate depending on how much fat they’re storing. When you lose weight, the size of your fat cells shrinks. There is no guarantee that they will stay small, however, especially if you revert to a bad diet or stop working out.

When you gain weight or eat unhealthy food, fat cells inflate. This restricts normal blood flow to the cells and stops them from functioning normally. They pack away fat at an excessively high rate and release fat at a terribly slow rate. What’s more, swollen fat cells churn out abnormal amounts of various hormones. At abnormal levels, these hormones worsen inflammation—which is a big cause of more fat gain—and slow down metabolism. More fat is then crowded into fat cells, leading to bloated, unhealthy toxic cells that continue to store fat and hold on to it for dear life.

The larger your fat cells, the harder it can be to drop weight. This gets to be a vicious cycle, especially if you don’t exercise much and eat too much of the wrong foods. We’re going to break that cycle now—and stop producing bigger fat cells that make future weight-loss efforts so tough.

Let’s talk about how Power Plates work. Primarily, they “cool” inflammation, a process I’ll talk about in detail in the next chapter. But for a summary, inflammation is the body’s natural response to protect itself against harm. Normally, it works in the short term to heal injuries and illnesses, then shuts off. But if it doesn’t shut off, inflammation causes many serious diseases—even obesity. If someone eats a lot of processed food, junk food, sugar, or foods to which they’re intolerant or allergic, this food inflames their fat cells and those cells act like they’re infected. As a consequence, they will not release fat. They will stubbornly hoard it, so it can’t be burned. Fat cells then inflate and get bigger. This is the reason people pack on pounds—enlarged fat cells. Inflammation is thus a huge threat to fat cells and prevents us from losing body fat. So, unless this situation is resolved with proper diet and exercise, someone can become overweight or obese.

Excess body fat, especially around your tummy, is an additional risk factor for inflammation. This turns into another vicious cycle. But by following Power Plates, you protect your fat cells from inflammation so that they perform their job of releasing fat so that it can be burned.

Here’s a biggie when it comes to weight control: food sensitivities. An important part of cooling inflammation is to identify your food sensitivities and cut back on foods that make you feel sick. Nearly 20 percent of us have some type of food sensitivity. This causes a reaction in the body that can trigger weight gain (especially around the middle), cravings, and bloating. Eating reactive foods regularly makes it harder to burn off fat and get lean.

I’ve observed this phenomenon in many of my clients—even in myself. A few years ago, I’d sauté lots of veggies, including onions, for dinner. Within thirty minutes, my stomach would bloat so much that my sons thought I was pregnant. There would be wicked gas (it’s a good thing my husband and I could laugh that off). I’d get headaches, too, along with swollen finger joints. I felt like I had the flu.

I was miserable, so I took a food sensitivity test. First of all, it turned out that my body can’t tolerate yeast. It affected me worse than any other food. That meant no more pizza. I was pretty miserable over that until I discovered yeast-free cauliflower-crust pizza. Second, my other sensitivities were to potatoes and onions (which were triggering my bloat and discomfort). Goodbye potatoes and onions—and gas. Hello to a happier husband.

Once I cut out these reactive foods, especially yeast, my symptoms vanished. If you’ve experienced something similar, know that I’m here for you. There’s real evidence that addressing this key cause of weight gain can help you shed pounds. This plan can be a powerful tool to help you learn which dietary changes can produce dramatic effects in weight loss and overall health.

Erin Oprea is a NESTA- and AFAA-certified personal trainer as well as a former Marine who has served two tours of duty in Iraq. She has been Carrie Underwood's personal trainer since early 2007 and has trained Maren Morris, Kacey Musgraves, Kelsea Ballerini and more, earning her the title of "Trainer to the Stars." She currently lives in Nashville with her husband and two boys. 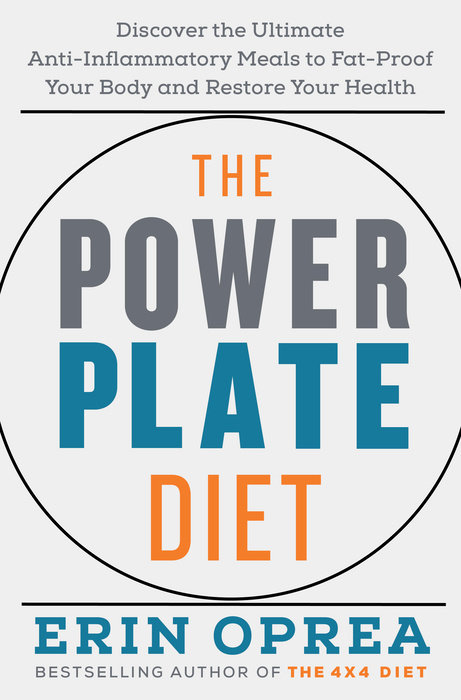