Two impossible love stories are fatefully connected by one artistic legacy in a stunning debut that leaps between the mysteries of late-Renaissance Venice and the dramas of present-day America.

“Enchanting from the first page.”—Sarah Jio, New York Times bestselling author of All the Flowers in Paris

In the wake of her father’s death, Rose Newlin finds solace in her work as a book restorer. Then, one rainy Connecticut afternoon, a struggling painter appears at her door. William Lomazzo brings with him a sixteenth-century treatise on art, which Rose quickly identifies as a palimpsest: a document written over a hidden diary that had purposely been scraped away. Yet the restoration sparks an unforeseen challenge when William—a married man—and Rose experience an instant, unspoken attraction.

Five centuries earlier, Renaissance-era Venetians find themselves at the mercy of an encroaching Ottoman fleet preparing for a bloody war. Giovanni Lomazzo, a portrait artist grappling with tragedy, discovers that his vision is fading with each passing day. Facing the possibility of a completely dark world, Gio begins to document his every encounter, including what may be his final artistic feat: a commission to paint the enchanting courtesan of one of Venice’s most powerful military commanders. Soon, however, Gio finds himself enraptured by a magnificent forbidden love.

Spellbound by Gio’s revelations, Rose and William are soon forced to confront the reality of their own mystifying connection.

An excerpt from The Lost Diary of Venice

Time had begun to loop in on itself. Rose Newlin realized this one day, on her bike ride to work, when she looked up and noted with some surprise that the red maple trees had budded. Her routine had become so fixed, so circular, that only the seasons seemed to change. First, always, came a bike ride. The wind pinked her cheeks and tugged a few curls loose from under her helmet as she wound her way through the university campus to her bookshop. Then, a quick walk to the café on the corner, with its familiar scent of roasting coffee beans. The barista there wore button-­up shirts and had small tattoos on each of his fingers: an arrow, a compass, the figure-­eight of eternity. Slender tips of more ink peeked out from under his cuffs.

“Good morning, Joel. Latte for me, thanks.” She always gave her order, even though they both knew what it’d be.

Afterward, strolling back to the shop, she watched fragments of herself slip past in store windows: auburn hair twisted up in a knot, rangy frame she could never seem to add any muscle to. Faded jeans and her favorite knit sweater, a lightweight parka thrown on top. She reminded herself to work on her posture. Her eyes flashed back at her from the glare of glass, green flecked with gold. In certain lights their color seemed to change, tilting blue or nearly gray. Her father had called them “labradorite eyes,” after the gemstone.

Rose focused on the cracks in the sidewalk. She didn’t need to think about him today.

She reached the shop then and unlocked the door, flipped the sign to open. Though she’d owned the place for two years, each time she stepped inside she still felt a swell of contentment, like a farmer taking in his crops at dusk. This parcel of life, this here, is mine and mine alone. She’d decorated the space carefully, filling each nook with well-­padded reading chairs and antique lamps. A few months after she’d opened, a stray tomcat had arrived on the doorstep to complete the picture. Black and stocky with one eye gone, he’d claimed the burgundy chair by the front window as his own.

At his name, the cat jumped from his perch and padded over to rub a cheek against her calf. His empty socket was a tight-­screwed slash of puckered fur, and when he closed his eyes it was hard to say which was missing. Rose bent to give him his morning scratches. She filled his food and water bowls, then took her seat at the register. Odin leapt to join her, circling several times in her lap before settling down, paws tucked under his chest. The hours passed in a sorting of bills and a shuffle of patrons, an occasional shift of position. Outside, it began to mist, draping a delicate silver beading over the windows, the cars parked outside. A hush settled through the shop. Rose’s bun slid loose; even the sturdiest elastic proved futile against her hair, thick and coarse as a horse’s mane.

Then the clank of the heater, the creak of the door.

Later, she’d research what had happened to her. She’d learn about the scientific intricacies of attraction, the complex chain of chemicals that flood the prefrontal cortex. She’d underline with blue ink a scholarly article on the way synapses and neurons firework the brain, inundating the mind with dopamine. How norepinephrine, a neurotransmitter, dries the mouth, shakes the hands, pumps the heart. How the body experiences obsessional thought patterns and cravings.

None of that could help her in the moment, though, as she floundered: half-­standing then sitting again, frantically twisting her bun back in place as the man at the door made his way toward her. He wore a red flannel shirt with the sleeves rolled up and a black quilted vest, droplets of water hovering in constellations across its surface. His dark hair was wet, threaded through at the temples with early gray, and a canvas bag hung from his shoulder. Rose noticed his left thumb was bandaged; when he opened that hand, she saw her name written across his palm in blue ink, a small drop of blood penetrating the gauze.

He said her name out loud, then tucked his hand away in the pocket of his vest.

“Do you know where I can find her?”

“I’m Rose.” At her feet, Odin ventured around the corner of the desk to sniff at the stranger’s shoes.

“My name’s William.” He put his other hand to his chest. “I called up to the university library about restoring a book and they said to swing by here. Told me you’re exceptional, as a matter of fact.” He paused politely for her to say something.

Nothing came to mind.

He cleared his throat. “Do you still do restorations?”

She nodded, rubbing her suddenly damp palms on her thighs under the table, trying not to make any visible movements. It didn’t matter: he was too busy wrestling a stack of papers out of his bag to notice.

“Great. I was hoping you might be able to take a look at this.” He set the stack down on the desk in front of her. It was wrapped in gray and white striped linen, and tied with twine. She’d known what to do then, at least. As she picked at the knots, he bent to scratch the cat. His disembodied voice floated up from behind the counter.

“So, the story is that my great-­grandmother passed away—­”

“I’m sorry.” A reflexive response. She could hear Odin’s guttural purr start up, a small motor.

“Don’t be. She was ready to go—­beyond ready: a hundred years old. I never really knew her. All the family’s moved away, and she was in a care facility with her stuff in storage. Anyway, it turned out I was the only one willing to fly over and go through her things. It was fascinating though, what she had.” He stood back up, cheeks flushed. “This seemed like it might be important. It was at the bottom of a trunk with family portraits, her wedding dress, things like that . . . Oh, sorry if I tied it up too tight.”

“It’s okay.” Just as she said it, the twine yielded. After asking to use scissors, Rose carefully angled the blades between the brittle pages; he bent close to watch.

She read the title out loud.

“A book about art,” he repeated, gazing down at the calligraphy. “I can’t believe it. By Giovanni Lomazzo . . . That’s my last name, Lomazzo.”

“Then this certainly belonged to your family.” Rose set the cover sheet to one side; beneath it was a full page of text.

“Shouldn’t you be wearing gloves?” He was staring at her hands again.

“No, that’s a misconception.”

“Why?” He tilted his head, and she noticed he was a few days past needing a shave.

“Well, a lot of glove fibers—­like cotton, for example—­have fats and alkanes in them.”

His eyes widened, which she took as a sign to continue.

“They insulate your hands, which can stimulate the sweat glands. Then, as you produce moisture, they’ll wick and transfer it to the vellum. So, it’s actually better to just handle the paper directly.”

“Guess it makes you crazy to see people wearing gloves on TV shows, then.”

“Mmm.” She squinted down at the second page, which looked like an author’s introduction. The ink had faded, but she was able to make out a notation at the bottom: Venezia 1571. She lifted the pages to see if the writing continued through to the end of the stack. It did.

“It’s dated 1571 Venice. Where did your great-­grandmother live?”

“A town called Padua. Wow, is it really that old?”

“I’d say so, judging by the vellum. I don’t think Padua is that far from Venice.” She bent to examine the writing. He leaned in too. She could smell his breath, tea tree and mint, like the flavored toothpicks sold at health food stores. “Oh! This is a palimpsest!”

She couldn’t help but smile. “A palimpsest. It means there are actually two documents here.” She pointed down at the page, tracing her index finger along the lines for him to see. “The author wrote one text, scraped it away, turned the page, and wrote over the top again crosswise. It might not be the same author who wrote both, but based on the calligraphy I’d bet that it is. What’s interesting is how visible the undertext still is.” And it was, ghosting beneath the top layer of ink like a weak perpendicular shadow.

“Is it possible to find out what they both say? Both the writings?” He glanced up from the page, eyebrows raised.

“I think so, yes. It might’ve been an issue if the undertext had been completely scraped away . . . but in this condition? I should be able to render both.”

Margaux DeRoux was born in Juneau, Alaska. Before turning to fiction she was a waitress, a teacher, and a marketer. She now lives in California with her husband and daughter. 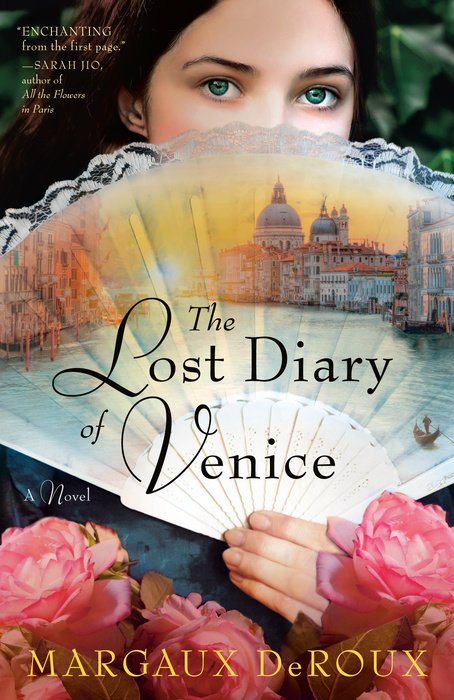