The Sweeping History of Ancient Greece as Told by Its First Chroniclers: Herodotus, Thucydides, Xenophon, and Plutarch

From the leading scholars behind The Greek Plays, a collection of the best translations of the foremost Greek historians, presenting a sweeping history of ancient Greece as recorded by its first chroniclers

“Just the thing to remind us that human history, though lamentably a work in progress, is always something we can understand better.”—Sarah Ruden, translator of The Gospels and author of The Face of Water

The historians of ancient Greece were pioneers of a new literary craft; their work stands among the world’s most enduring and important legacies and forms the foundation of a major modern discipline. This highly readable edition includes new and newly revised translations of selections from Herodotus—often called the “father of history”—Thucydides, Xenophon, and Plutarch, the four greatest Greek innovators of historical narrative. Here the reader will find their most important, and most widely taught, passages collected in a single volume. The excerpts chart the landmark events of ancient Greece and provide a comprehensive account of the entire classical Greek age.

From the start the Greek historians demonstrated how broad and varied historical writing could be and brought their craft beyond a mere chronicle of past events. This volume explores each author’s interest in religion, leadership, character, and the lessons of war. How, for instance, should readers interpret Herodotus’ inclusion of speeches and dialogues, dreams, and oracles as part of the “factual” record? What did Thucydides understand about human nature that (as he said) stays constant throughout time? How did Plutarch frame historical biography as a means of depicting the moral qualities of great men?

Complete with introductions to the works of each historian, footnotes providing context and explaining obscurities, maps, and an appendix on the Greek conduct of war, this volume is an invaluable resource for students and passionate readers of history alike.

An excerpt from The Greek Histories

As Homer was to poetry, so Herodotus was to history: a writer of enormous scope and vision who, working from small, discrete stories largely circulated by word of mouth, created a monumental work unlike anything before it. And just as with Homer, Herodotus seemed, to later readers, to be a darling of the Muses: After his death the nine books into which his work was divided were given the names of the nine Muses, as though they had taken shape from divine inspiration.

For lack of any title or genre label to describe his creation, Herodotus introduced it to his audience with his declarative opening words: “This is the display of the historiē of Herodotus of Halicarnassus.” The Greek word historiē meant “inquiry” at the time Herodotus deployed it, but because of its prominence in his opening sentence, it took on new layers of meaning. Within a century, Aristotle would use it to mean “a written account of the past.” Thus was the word “history,” in the sense we give it today, created, at the same moment as the genre itself.

Though he is today called a historian, Herodotus was much more than that. His work focuses on the wars between the Greek world and a vast Persian empire that stretched from the Aegean to what is now Pakistan and included Egypt as well. Those conflicts began in earnest in 499 bc, but Herodotus casts his eye further back in time, only reaching the start of hostilities at about the midpoint of his work. He has much else to discuss: the origins of great Asian monarchies and Greek tyrannies; the customs of various non-Greek peoples, especially the Egyptians, builders of an immensely old and complex civilization; the geography of the oikoumenē or “inhabited world,” the span of the earth known from human report; and above all the influence of the divine on human life, whether through dreams, oracles, natural phenomena, or the strange freaks of chance that we might chalk up to blind luck but which the Greeks always linked to the gods.

The main story line of Herodotus’ work, the Persian Wars as we call them, serves as a connecting thread on which many tales are hung, the units Herodotus calls logoi (“stories,” “accounts,” “discussions”). Some of these larger logoi contain smaller ones within them, as for example the logos of Croesus, king of Lydia, spanning the first half of book 1. To put this monarch in his proper historical context, Herodotus first describes how his great-great-grandfather Gyges established his dynasty by seizing the Lydian throne, and how each successive king expanded Lydian power. Then comes a dialogue between Croesus and Solon, an Athenian wise man, and, as a result of the arrogance Croesus there displayed, a family drama involving the king’s ill-fated son. Only at this point, halfway into the Croesus logos, do we reach Lydia’s attack on Persia, and the connection to our major theme—the rise and fall of the Persian Empire—begins to emerge.

This loose, digressive structure defies our expectations for linear narrative. We seem to be in a “web” of stories, hitting “hyperlinks” everywhere that take us in new directions. In book 2 we veer off the main path to explore Egypt, a land thick with marvels, in enormous depth. Yet the main thrust of the work is always discernible: Egypt matters because the Persians conquered it in the 520s bc, another stage in their relentless growth. The same imperial drive will take us later to India, Arabia, Scythia, Thrace, indeed nearly every part of the world known to the Greeks. For each new region that falls to the Persian advance, Herodotus tells us all he knows about the people and their customs and notes any “wonders” of which he has heard. His work is thus a compendium of geography and anthropology as much as a narrative history.

There are other ways in which Herodotus does not behave as a historian “should.” He repeats stories that he himself disbelieves, simply because they are going around—“to tell what is told” is a goal he at one point claims for himself. He puts speeches and dialogues in the mouths of historical actors, even at points where he cannot possibly have known what was said. He attributes events of global importance—a massive invasion, say, of one nation by another—to the personal or whimsical motives of an individual, not to the broader geopolitical factors we might look for today. For this reason he often seems to be writing something closer to myth than history, employing the same kind of thinking by which the Trojan War was traced to one man’s abduction of one woman—Helen, the wife of Menelaus.

Yet Herodotus also recognizes a boundary between myth and history, and in his opening paragraphs he places himself squarely on the historical side. He declines to discuss the Trojan War, or other early accounts of East-West conflict, but moves to a starting point with “the man who I myself know was the first to begin unjust deeds against the Greeks”—namely, Croesus. The stress on personal knowledge—“I myself”—is important. Herodotus lived well after Croesus had died, but he could talk to his grandfather, perhaps even his father, about the fall of the Lydian king. Nearly all the events of the Histories could be attested by eyewitnesses or by those who had talked with eyewitnesses in an older generation—that is, Herodotus heard them either at first or at second hand. He could himself assess the reliability of his informants, sorting out which ones to trust and what motives each one had for distorting the record. He could make an “inquiry,” the starting point of historical writing in the Greek world.

But Herodotus does not always stick to his own methodology. He sometimes accepts reports that can’t be inquired into or expresses belief in things that can’t be seen. When he speaks of the Hyperboreans—a legendary arctic race thought to dwell “beyond the North Wind”—he says that if such people exist, then there must be men beyond the South Wind too. So also in matters of religion: In cases where some thought the gods were at work but others looked to human or natural causes, Herodotus tended to side with the believers. When the question arises, at the court of Xerxes, whether dreams come from the divine or simply from our own minds, an experiment proves that they do have a divine source (see pp. 83–86 below). Perhaps more important than this pious conclusion, however, is the fact that Herodotus allows the question to be raised, and the experiment to be made, in the first place.

Even the gods can be interrogated in the world into which Herodotus ushers us. Croesus, whose logos comes first in the Histories, serves as a model in this respect as in so many others. When his fate seems to run counter to what the oracles had foretold, Croesus is given leave to ask Apollo to account for the gap and for the god’s seeming abandonment of a generous worshipper. Remarkably, Apollo answers—not in verse, as an oracle normally would, but in plain prose, Herodotus’ own medium. The reply satisfies Croesus, and Herodotus expects it will also satisfy us. Historical events can in the end be explained, even when the gods, and other mysterious forces, help steer them to their resolution.

The Sweeping History of Ancient Greece as Told by Its First Chroniclers: Herodotus, Thucydides, Xenophon, and Plutarch 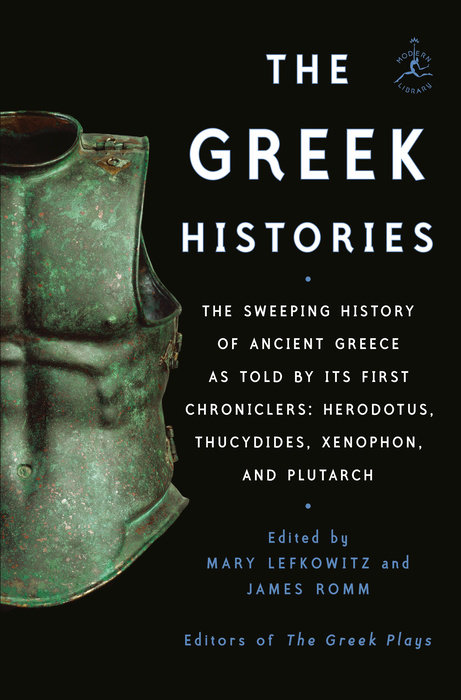