“Betrayal and desire fuel the story of Margot, the secret daughter of a twenty-year affair between a French politician and a famous actress. . . . A startling, affecting first book by an author who is confident in her craft.”—The New York Times

Margot Louve has lived her whole life as a secret. The hidden daughter of a long-standing affair, she exists with her mother in the shadows, living in a small Parisian apartment on the Left Bank.

It is a house of cards that Margot—fueled by a longing to be seen and heard—decides to tumble. The summer of her seventeenth birthday, she meets a well-regarded journalist who will set her plan in motion.

But as Margot is drawn into an adult world she struggles to comprehend, she learns how one impulsive decision can shatter the lives of those around her in ways she could never have imagined. Incisively exposing the seams between private lives and public faces, The Margot Affair is a simmering exploration of desire, transgression, and the dangers of speaking the truth.

An excerpt from The Margot Affair

Onstage my mother was her truest self. I would see the transformation within moments, a slow-building intimacy between herself and the audience. Mid-scene she would remove her shirt with the ease of a man, as if taking off a pair of socks. Then she would hold her red curls with both hands and lift them high enough to expose the length of her neck, jut out her elbows and accentuate the slope of her shoulders. She could be whomever she wanted. In her one-woman shows she would address the audience as though they were old friends. I could feel her effect on them as they tilted forward, eyes wide, their pores opening in her presence. She carried this effortless familiarity out into the world. With strangers, she was joyful and gracious. She dazzled. In other words, she was a true actress.

She had been acting since her teenage years, but it was a lead role in the nineties, when I was barely five years old, that propelled her career and led to her solo acts. The play in question was Mère, a short, forceful production that ran eighty minutes without an intermission. It had a small cast: a man, his wife whom she played, their three young children, and the man’s father. It ended in a long scene where the mother kills her children in a bathtub. The potential for such a violent act wasn’t at first visible in the mother—although there was a hovering sense of unease, interspersed with moments of levity and tenderness. At that age, no one told me my mother was playing a woman who murders her children, but I knew offstage she would often choose to stay in character.

At home, she was a stranger to me. I wanted her to return to where she’d come from, as if she could be reabsorbed into herself. She was turned inside out, her interior laid flat along her skin for everyone to see. I preferred her right side out, a mother in the conventional sense.

I wanted to be proud of my mother, and yet most of the time I would find myself annoyed. What others admired in her seemed exaggerated and theatrical to me.

Well, it is theater, Mathilde said, when I complained.

But I want to be moved by her. I want to stand on my feet and clap with all of you.

What high school girl is moved by her mother?

We love that you’re not good, Théo said.

Théo and Mathilde were my mother’s closest friends. Mathilde was a renowned designer in the theater world, specializing in embroidery. She tailored my clothes and made me dresses for special events. She had worked on the costumes for Mère. Théo, her husband, was a dancer. My mother had trained as a dancer in her youth and felt an instant kinship with Théo.

With me, my mother cultivated distance in a more deliberate way. I had memories of standing outside her room, knocking on the door. Maman, I’d say, thinking she hadn’t heard me. One day I transitioned to Anouk, hoping she might better respond to her name. Over time it became harder to say Maman; the soft consonants would belie the estrangement I so often felt around her. Anouk, on the other hand, ended with a sharp edge, and when I yelled her name, it was like throwing her over a cliff.

Her bedroom was smaller than mine, with a flimsy wooden door and a gap the size of my toe between the floor and paneling. I remember her voice on the other side, practicing the same line over and over again. I should have pulled you from that dark place and covered you with kisses. I would wait for her to open the door.

When we were alone, she’d look at me with a serious expression and say: We have to cut the cord. Too much affection is the greatest handicap. At those times, the difference between us would seem enormous, as if we were from two foreign countries, each speaking our own dialect. A mother is not a friend, she would like to emphasize, as if to justify our divergent views. It was true, we never whispered secrets to each other on the métro or hooked arms in the street. Those who didn’t know us well thought we were alike—that I, too, would become an actor one day. They thought it was the kind of profession you acquired from your parent the way one writer engenders another writer. But I had half her physical grace, my voice had never carried the same musicality or appeal, and I didn’t attract the stares of men on the street the way she did. She had little interest in turning me into a version of herself. She hadn’t taught me to act or dance. She took excellent care of her skin and teeth, but she’d never nagged me to take on her habits. In private, I’d peruse her dresses in the closet, touching the soft fabrics and silks, so unlike the synthetic items I wore. Most of all, I resented her for leaving me with the task of being the careful one, having to monitor everything I said. Over time I’d refined a look of blankness that would be misinterpreted as shyness or indifference.

And yet, even when she repelled me, I loved her with abandon. I would wake to her sounds every morning: the wooden floorboards creaking beneath her feet and water gushing from the faucet when she filled the kettle. I knew she had made sacrifices for me. I knew motherhood clashed with her self-realization. Some days I recognized a younger self folded into her majestic, long body. A vulnerability flared on her surface and made me wonder whether we’d be friends if we were the same age.

I wondered this because we were very close. We lived as roommates. It’s just the two of us together in this apartment, she would say, speaking with false affection, the old complaint seeping through. She called herself a single mother, as though she’d raised me on her own, but this wasn’t entirely the truth: I had a father who visited.

Friends of hers would come by and stay overnight, most of them actors she worked with. Clothes drenched in stale smoke, they filled our home with loud opinions and ideas on how I should be parented. We had a cat for two years, a long animal with thick orange hair that we inherited from a friend who had moved to another country. The cat never assimilated, resisted being held, and came to me only when I cried, rubbing her torso against my legs when she sensed my distress. One summer she escaped through the open window of our kitchen and never returned.

By the time I was in high school, we had lived in three apartments, each one smaller than the last as we moved closer to the center of Paris and finally to the Left Bank. Anouk’s friends didn’t understand why she wanted to live in an expensive neighborhood steps away from the Jardin du Luxembourg. They wondered how she could afford the apartment on her own. They blamed her bourgeois parents. You’re crawling back to your roots, they teased. But I knew it was something else. She loved Father, and this was a neighborhood he approved of. It was here, one afternoon in late June, not far from our street, that his other life crashed into ours, forever disturbing its arrangement.

I had just finished my French oral exams. I’d been wearing the same outfit all through the spring, black jeans faded gray from many washes and a blue tank top. I liked how the white lace of my bra showed under the thin straps of my top. At fifty-seven, Anouk was magnificent. Narrow hips and a lean stomach, a slight depression at her belly button, angular shoulders. Everything about her was long aside from her feet, the one ugly part of her body, red bunions and tiny toenails that she kept painted to distract from the feet themselves. They were the same size as mine. Even when she wore jeans in the middle of the summer, they slipped up her dry thighs with no resistance. I’d always known my mother was beautiful because of the comments friends and strangers alike made, but it was only in those previous months that I’d begun to understand how her beauty was rare. Most peoples’ faces eventually dissolved into other parts, whereas hers had become more defined over time, the bones shifting to their right place in middle age.

We sat side by side at a small round table on the sidewalk of a café, facing those sand-colored buildings with their shallow wrought-iron balconies. We could see the gates of the park at the end of the street, their golden spikes, and the overflowing greenery behind. It was late afternoon, the hottest hour of the day, and the pale façades of the buildings reflected onto the pavement, trapping heat into a furnace beneath our feet. Anouk bathed in the sun, sleeveless, a straw hat on her head. I told her to cover her shoulders; they were turning pink.

She was an energetic talker, and I rarely had to prod her along in conversation. She was telling me about a play she was codirecting with a friend, who had less experience than she did. She knew the ins and outs of putting together a show, from writing the script to setting up the décor. Although she wasn’t all that organized in her private life, she was a skilled director onstage. These actors, however, were novices. Anouk swung her neck to the side, cracking it gently. I shuddered at the sound of her body—the machinery made visible for a moment. She explained how it was important for her to know their lines. She’d garner more respect if she could correct them, finish their sentences.

How old are the actors? I asked.

Not much older than you, she said. They’ve just finished school. As soon as it’s time to break for lunch they disappear for an hour. Imagine, a whole hour to eat a sandwich. Not one of them stays to rehearse. They lack your discipline.

I smiled at the compliment.

Sanaë Lemoine was born in Paris to a Japanese mother and French father, and raised in France and Australia. She earned her undergraduate degree from the University of Pennsylvania and her MFA at Columbia University. She now lives in New York. 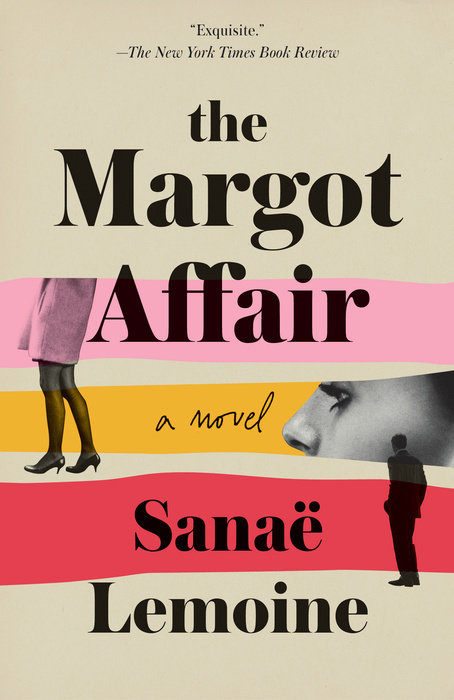