Amateur sleuth Charley Carpenter discovers a coded journal that could crack her small town’s most infamous cold case wide open in this charming cozy mystery from the USA Today bestselling author of The Book Club Murders.

As the owner of Old Hat Vintage Fashions, Charley Carpenter supplies retro apparel to the residents of Oakwood, Ohio, but she’s been known to set business aside to play detective when a mystery rears its head. And there’s no bigger mystery in Oakwood than the murder of Regan Fletcher—a case that’s haunted the town for decades.

Regan’s boyfriend, Carter, did time for the crime—until another man’s confession freed him. But did the “real killer” really do it? Or did Carter walk away with blood on his hands? When Charley stumbles on an old journal written in code, it only complicates the case by revealing a blackmail scheme that targeted dozens of Oakwood’s citizens, giving them all a motive for murder.

Now, with a spate of new suspects to pursue, plus a fresh murder and the abduction of her sleuthing partner, Charley must dig deeper still into the past—even as she risks being buried by her shadowy prey. Joining forces with Detective Marcus Trenault and the newly formed Oakwood Mystery Book Club, Charley turns to a classic whodunit for clues on catching a killer—before more lives are lost, and the truth dies with them.

An excerpt from The Codebook Murders

This crazy day just might witness the first recorded death by humidity.

Despite the cool air blasting from the dashboard vents, Charley Carpenter felt about as flat and lifeless as an overcooked pancake. Moist, breathless heat pressed down like a spatula. Her curly red hair was plastered to her face and neck. During the past hour clouds had rolled in, dark and ominous with a sinister green cast that made her nervous on a primitive, cavewoman level. It had been blowing strong when she’d run inside Arrow Wine, a fitful wind that flung handfuls of hard drops against her skin that stung, powerful gusts tossing the treetops and snapping the market’s awning on its metal frame. She’d been sure she’d walk outside into a torrential downpour. However, the wind had now died completely. The clouds were so low, she felt as if she could reach up and touch their scalloped undersides. It was a struggle to fill her lungs, and she’d ducked into the safety of the Mystery Machine, her custom-painted panel van, with a sigh of relief.

“I do not like this,” she muttered, peering up at the sky. “Time to get home.”

Charley drove as fast as she dared down the deserted residential streets, not wanting to get nailed by the ever-vigilant Oakwood Safety Department. A speeding ticket was not in the budget this month, thank you very much. Street lamps flickered on as the light dimmed even further, adding to the surreal feeling of the early afternoon landscape.

If the downpour turned out to be as heavy as that sky portended, she reflected, it might mean canceling that evening’s meeting of her brand-new book club. That would be a shame, as it was only their second gathering, and the first at which they would actually discuss a book.

The inaugural meeting had been more of a happy accident. Charley and her small staff had been conducting inventory at Charley’s vintage and “special occasion” fashion shop, Old Hat New Beginnings. Frankie Bright, Charley’s best and oldest friend, had stopped by to help, as she often did. As talk turned to what the four women were currently reading, two more friends had wandered in, joining in on the book chat with enthusiasm. Frankie had surveyed the lively group, clapped her hands for attention, and proposed the book club idea.

“It’s been eight months.” Frankie had been referring to the demise of the Agathas Book Club, of which she and Charley had both been members. In the wake of five murders and two arrests that had decimated the membership, the Agathas had necessarily disbanded. Charley wasn’t sure she wanted to tempt fate by forming another group, but Frankie had waved this away. Despite her diminutive stature, she was a force to be reckoned with. “It’s time,” she’d said firmly. “I miss the book talks, and I know you do, too.”

When the other women had seconded the proposal with enthusiasm, Charley had acquiesced. It was true; she had missed those discussions—if not all of the book club’s members.

For their first order of business, the new club voted unanimously to retain the Agathas’ original themed reading list. They would select and dissect murder mysteries, by female authors only.

“Those are always the best.” Vanessa St. James was one of Charley’s part-time clerks at Old Hat and, at eighteen, the youngest member of the new club. “Besides,” she’d added slyly, “we’ll probably need the practice.”

“Practice?” Charley had stared, confused, as the others exchanged meaningful glances. “Practice for what?”

“Why, for the next time you find a dead person, Charlotte, dear.” Heddy Jones was Charley’s head salesclerk and the most senior member of the club. The lively septuagenarian had patted Charley’s hand. “It’s all right. We know it’s not your fault.”

Afiya Vickerson had nodded in solemn agreement. Fee owned Slash, the hair salon across the alley. She was a frequent visitor to Old Hat, and she and Charley had discovered common ground in the challenges of small-business ownership and forged a strong friendship. “I found the experience of helping you solve your last case to be very rewarding,” she’d confessed, her low voice tinted with the rich accent of her native Somalia. “The opportunity to solve another such puzzle, even if it occurs within the pages of a book, will be most welcome.”

“Well, you can count me in.” Dr. Sharon Krugh, assistant Montgomery County coroner, had flipped her straight honey blond hair behind cashmere-clad shoulders, pulled out her cellphone, and begun scrolling. “Real homicide cases are rarely resolved as neatly as fictional ones. It’ll be a nice reprieve, not to mention an actual social event that doesn’t include making conversation with a bunch of old stiffs. Pun definitely intended. How do Tuesday evenings work for everyone?”

And with that, the Oakwood Mystery Club had come into being, with its first meeting set to occur at the Carpenter home just a few hours from now. Unless, of course, the weather dictated otherwise.

Charley smiled to herself as she recalled everyone’s eager certainty that dead bodies galore were just over the next horizon. It was true that she’d stumbled across more than her share of crime scenes recently. But surely that was just coincidence, right? And while it was also true that she’d been instrumental in solving each case and bringing the killers to justice, it wasn’t like she went looking for murder victims. They just seemed to . . . find her. A lot.

As she idled at the corner of Schantz and Spirea, she noticed a teenage girl jogging down the sidewalk, book bag slung over one shoulder. Charley would know that spiky purple hair anywhere. She rolled down her window.

Katie O’Malley smiled with gratitude. “You bet!” She hurried across the street. “Thanks, Charley. I’m taking Ms. Magellan’s summer drama workshop at the high school. It just let out, and—”

First, the emergency siren abruptly began its mournful howl. The Safety Building was only four blocks away, and the noise was so deafening Charley couldn’t hear what Katie said next. Second, her ears popped. Third, as if a bomb had exploded, the wind was suddenly all around them, and with it came the rain. Violent and savage, it shook the van as sheets of water dumped from the heavens in massive torrents. Katie scrambled inside and slammed the door, but she was already soaking wet. Charley hastened to raise the window.

Then the rain turned to hail. Stones the size of golf balls began pelting the van and bouncing off the pavement, the roar of ten thousand impacts even louder than the siren.

Leslie Nagel is the USA Today bestselling author of The Book Club Murders, The Antique House Murders, The Advice Column Murders, and The Codebook Murders. She lives in the real city of Oakwood, Ohio, where she teaches writing at a local community college. After the written word, her passions include her husband, her son and daughter, hiking, tennis, and strong black coffee, not necessarily in that order. 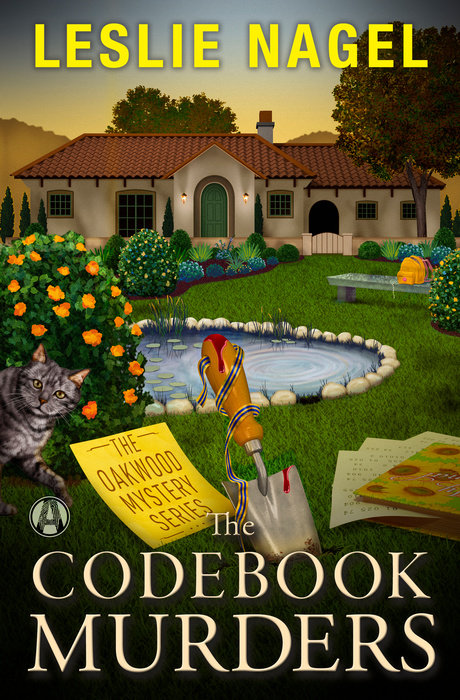