A Brief History of an Ongoing American Tragedy

Is America destined to always be a violent nation? This sweeping history by U.S. senator Chris Murphy explores the origins of our violent impulses, the roots of our obsession with firearms, and the mythologies that prevent us from confronting our national crisis.

“An excellent contribution to our understanding of human lethal aggression and how it can be reduced.”—Steven Pinker, author of The Better Angels of Our Nature: Why Violence Has Declined

In many ways, the United States sets the pace for other nations to follow. Yet on the most important human concern—the need to keep ourselves and our loved ones safe from physical harm—America isn’t a leader. We are disturbingly laggard. Our churches and schools, our movie theaters and dance clubs, our workplaces and neighborhoods, no longer feel safe. To confront this problem, we must first understand it. In this carefully researched and deeply emotional book, Senator Chris Murphy dissects our country’s violence-filled history and the role that our unique obsession with firearms plays in this national epidemic.

Murphy tells the story of his profound personal transformation in the wake of the mass murder at Newtown, and his subsequent immersion in the complicated web of influences that drive American violence. Murphy comes to the conclusion that while America’s relationship to violence is indeed unique, America is not inescapably violent. Even as he details the reasons we’ve tolerated so much bloodshed for so long, he explains that we have the power to change. Murphy takes on the familiar arguments, obliterates the stale talking points, and charts the way to a fresh, less polarized conversation about violence and the weapons that enable it—a conversation we urgently need in order to transform the national dialogue and save lives.

An excerpt from The Violence Inside Us

Pastor Sam Saylor looks like he could protect you—­from all sorts of things. Tall, muscular, as thick as an oak tree, Sam has presence. Lots of it. His powerful oratory and baritone voice can overtake a room, and his burly frame can alter the dynamics of a conversation. He wears a thin, carefully groomed beard and mustache, and often sports petite reading glasses, as if intentionally trying to soften his effect on you. His temper is quick, and he admits it has worsened over the years as the pain he has witnessed and experienced continues to well up inside him. But the anger abates faster than it builds, and grudges never hold. Still, his face at rest cannot conceal the hurt inside; Sam’s eyes are always heavy.

On a sunny, crisp afternoon, the twentieth day of October 2012, Sam was having a great day. Maybe the best day he’d ever had during his time as a pastor. Back in 2012, he was the pastor at Blackwell Memorial Church on the corner of Blue Hills Avenue and Euclid Street in the north end of Hartford, Connecticut, the poorest and most violence-­prone section of the state’s capital city. This was the job Sam felt he was created to do—­mentoring dozens of kids at risk of falling into a cycle of unemployment, incarceration, and poverty. No one understood the north end better than Sam. He grew up there, raised his six children there. He built a small business with customers all over the neighborhood. So he knew that the young African Americans who came through his church had a greater chance of spending their twenties in jail than in college, and that parents would leave his services on Sunday ravaged with anxiety over their inability to afford food for their children, many of whom would often go to bed aching with hunger.

To make matters worse, the streets of the north end had become a killing field over the previous two decades. Already nineteen people had been murdered that year. Sam was a drum major in what he called Hartford’s “parade of pain,” the nonstop cascade of gun crimes that rippled through the neighborhood. He was often among the first community leaders to arrive at a crime scene or a victim’s house, offering consolation and understanding. In the aftermath of the most horrific shootings, he organized street patrols and vigils and marches.

After the violence-­filled summer of 2012, Sam knew that the neighborhood surrounding Blackwell needed a way to release the stress that had built up, shooting after shooting. So he put all his energy into making that year’s annual fall festival the biggest party the neighborhood had ever seen. Sam spent weeks putting it together with a group of volunteers from the church. There was a baking contest, games for the kids, a tag sale teeming with affordable housewares for the parents, free food galore. And in the middle of it, Reverend Saylor, spinning hits at the DJ booth. It was an epic party.

“The best day of my life as a pastor,” he told me.

When the festivities were finished, Sam sped home, hoping to get a few hours of rest before starting the third shift at his overnight job.

Shane Oliver had a busy afternoon planned, too. Shane was the only child of Sam Saylor and Janet Rice, the product of their brief relationship. At twenty years old, he was starting a life as a businessman, using a little insurance money he got from an automobile accident earlier in the year to start a small car-­flipping operation. Shane bought near-­junked cars, repaired and refurbished them, and then sold them for a small profit. He managed to scrape out a little spending money, but he and his girlfriend, Maria, were still living with his mother, Janet, in her crowded Hartford apartment. Shane had been hustling for money since he was in elementary school, and he imagined a day when he would be able to pay his mom rent, or maybe even afford a place of his own for Maria and him.

“He was an industrious kid,” said Sam, beaming.

That Saturday, Shane and Maria planned to head to a vigil for his close friend, Angel “Ito” Garcia. One year ago to the day, Ito had been riding dirt bikes with friends in Colt Park, just south of downtown, when a truck began driving recklessly near him. The swerving truck forced Ito to steer his bike off the street and into an adjacent open field. When his friends circled back to check on Ito, he was gone. No Ito. No dirt bike. Nothing. And no one had seen Ito since.

It was the type of case, Sam thought, that would have warranted wall-­to-­wall cable television coverage if Ito had been named Rebecca or Sarah, and had long blond hair and pierced ears instead of cornrows and knuckle scars. A nineteen-­year-­old boy is riding his dirt bike and vanishes, and no one cares because it happened in Hartford. If it happened a few miles away, in middle-­class Wethersfield, for instance, it would have been different. Sam knew this, and it hurt.

Ito was just in the wrong place at the wrong time, went the argument. Sam hated that phrase. These kids get shot next to their school, at the playground, on their own front porch, Sam howled. Ito was out riding his bike with friends, minding his own business. How is that the wrong place? So, a full year after Ito’s disappearance, a small group of family and friends were keeping his story alive, and they planned to gather that night to mark the anniversary of his vanishing.

But before going to the vigil, Shane and Maria had to swing by the Sheldon Oaks Apartments to pick up the final payment for a Nissan Maxima that Shane had just fixed up for a new customer. The meeting was to take place at the small housing development near downtown Hartford where Shane had once lived—­the exact spot, in fact, where he had taken his first steps.

Walking had not come easily to Shane. When Janet was pregnant with him, he’d had a stroke in utero and was born with a form of cerebral palsy that dramatically affected the right side of his body. He walked with a noticeable limp, and he regularly hid his curled-­up right hand inside a pants or jacket pocket. Sam and Janet were worried, at first, that the disability would hold Shane back. Right from the start, though, Shane was relentless, so stubborn. He compensated for his weak right side by building up remarkable strength in his left. “He rode a bike, climbed trees, played basketball, played football. He did everything,” remembered Janet.

In a different neighborhood, maybe that would have been enough. Not in the north end, a place where the decades upon decades of discrimination, and economic desperation coupled with the daily threats of violence, fold layer after layer of trauma into the lives of children. There are few success stories in the north end—­kids who did well in school, got a good-­paying job, and reinvested that money in the neighborhood. Success really meant getting out, but first you had to survive. And survival meant learning how to punch your way out of trouble.

When I asked Janet and Sam to describe Shane to me, the first thing they wanted me to know, after explaining his cerebral palsy, was his greatest asset as a young man growing up in Hartford: “Shane was an excellent fighter,” said Janet, proudly. “Some kids gave him a nickname. Sugar Shane.”

Sam recalled hearing a story one day about a young man who waited at a local high school for the football team’s bus to return to the school from a game. As the players disembarked, the young man picked out two of them and attacked them mercilessly, beating the boys so badly that they both ended up in the hospital. Sam was so distressed by this report that he called Janet to suggest that they approach Shane and his friends to hunt down the culprit and report him to the police.

“Sam, that was our son. That was Shane!” howled Janet over the phone.

Shane never told Janet the complete story, but from what she could gather, the two players had been harassing Shane—­picking on him because of his disability—­and one day, he decided he’d had enough of the bullying, and took the two kids down.

“He wanted to let you know, right there, he was no punk,” Sam explained to me. “He had to hold his. Boys in the hood, you need to establish your position, and let people know you’re not a punk, because once people assume you’re one, they’re always going to come and challenge you.”

Elected in 2012 as the youngest member of the U.S. Senate, Chris Murphy has earned a reputation as a serious legislator who is willing to stand up for his principles and reach across the aisle. Since the Newtown school shooting in December 2012, he has also become the best-known leader in Congress in confronting the plague of gun violence in America. Now in his second term representing Connecticut, he and his wife, Cathy, an attorney, have two young sons, Owen and Rider.

A Brief History of an Ongoing American Tragedy 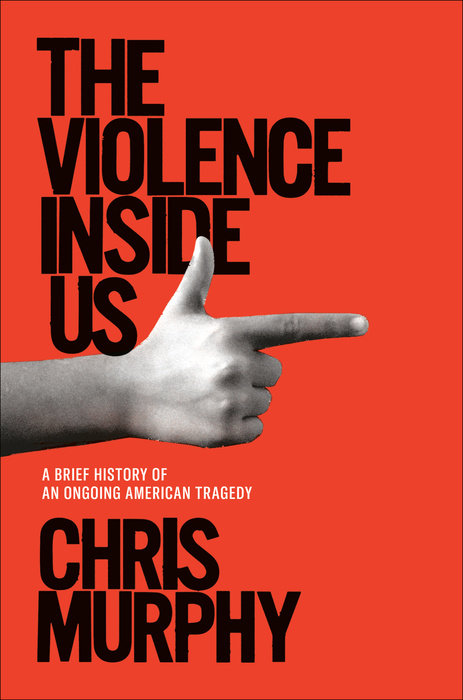