For the first time, the Cambridge Analytica whistleblower tells the inside story of the data mining and psychological manipulation behind the election of Donald Trump and the Brexit referendum, connecting Facebook, WikiLeaks, Russian intelligence, and international hackers.

“Mindf*ck demonstrates how digital influence operations, when they converged with the nasty business of politics, managed to hollow out democracies.”—The Washington Post

Mindf*ck goes deep inside Cambridge Analytica’s “American operations,” which were driven by Steve Bannon’s vision to remake America and fueled by mysterious billionaire Robert Mercer’s money, as it weaponized and wielded the massive store of data it had harvested on individuals—in excess of 87 million—to disunite the United States and set Americans against each other. Bannon had long sensed that deep within America’s soul lurked an explosive tension. Cambridge Analytica had the data to prove it, and in 2016 Bannon had a presidential campaign to use as his proving ground.

Christopher Wylie might have seemed an unlikely figure to be at the center of such an operation. Canadian and liberal in his politics, he was only twenty-four when he got a job with a London firm that worked with the U.K. Ministry of Defense and was charged putatively with helping to build a team of data scientists to create new tools to identify and combat radical extremism online. In short order, those same military tools were turned to political purposes, and Cambridge Analytica was born.

Wylie’s decision to become a whistleblower prompted the largest data-crime investigation in history. His story is both exposé and dire warning about a sudden problem born of very new and powerful capabilities. It has not only laid bare the profound vulnerabilities—and profound carelessness—in the enormous companies that drive the attention economy, it has also exposed the profound vulnerabilities of democracy itself. What happened in 2016 was just a trial run. Ruthless actors are coming for your data, and they want to control what you think.

An excerpt from Mindf*ck

With each step, my new shoes dig into my heels. I clutch a dark-blue binder, filled with documents organized by colored tabs. Awestruck by where I’ve found myself, and apprehensive of where I’m heading, I focus on the sounds of our footsteps. An aide reminds us to move quickly so we won’t be seen. We walk past uniformed guards, into an atrium, and turn down a corridor. The aide pushes open a door and we rush down some stairs and into a hallway that looks exactly like the last one—marble floors, high ceilings, wooden doors with the occasional American flag. There are seven of us, and our footsteps echo through the hall. We are close; then I’m caught. A congressman spots me and waves hello. Back again already? A handful of journalists wanders out of a press conference. They clock my electric pink hair and know who I am.

Two cameramen run in front of me and start filming, walking backward as they do. A scrum forms, the questions start coming—Mr. Wylie, a question from NBC! A question from CNN! Why are you here?—and one of my lawyers reminds me to keep my mouth shut. The aide points me to an elevator, warning the journalists to keep their distance, and we pile in. The cameras keep snapping as the doors close.

I’m jammed in the back of the elevator, surrounded by people in suits. We start to descend, dropping deep underground. Everyone stays quiet on the way down. My mind is swimming with all of the prep work I’ve done with my lawyers—what U.S. laws were broken and by whom, what rights I do and don’t have as a non-citizen visiting America, how to calmly respond to accusations, what happens if I am arrested afterward. I have no idea what to expect. No one does.

We come to a stop and the elevator doors glide open. There’s nothing down here except another door, with a large red sign that reads RESTRICTED AREA in white lettering. NO PUBLIC OR MEDIA ACCESS. We’re three floors beneath the U.S. Capitol, in Washington, D.C.

Beyond the door, the floors are covered in a plush maroon carpet. Uniformed guards confiscate our phones and other electronics, placing them on a numbered shelf behind the desk, one to a person, and giving us each a numbered ticket. They tell us we can have only pencils and paper beyond this point. And on the way out, they warn us, our papers could be confiscated if it’s determined that we’ve taken notes on anything of a sensitive nature.

Two guards push open a massive steel door. One of them gestures us through, and one by one we step into a long hallway dimly illuminated by fluorescent lights. The walls are paneled in dark wood, and the corridor is lined with long rows of American flags on stands. It smells like an old building, stale and musty, with hints of cleaning fluid. The guards lead us down the hall, turning left and continuing to yet another door. Above, a wooden seal emblazoned with a giant eagle, arrows clutched in its talons, stares down at us. We have arrived at our destination: the Sensitive Compartmentalized Information Facility (SCIF) of the United States House Permanent Select Committee on Intelligence—the same room where classified congressional briefings are held.

Inside, hit by the glare of fluorescent lights, my eyes need time to adjust. The space is thoroughly nondescript, with blank beige walls and a conference table surrounded by chairs. It could be any room in any of the numerous bland federal buildings scattered across Washington, but I’m struck by the silence of the SCIF. It is soundproof, built with multilayer walls that make it impervious to surveillance. The architecture is said to be blast-proof. This is a secure space, a place for America’s secrets.

Once we’ve taken our seats, the members of Congress begin filing in. Aides place tabulated binders on the table in front of each committee member—the Democrats’ ranking member, California congressman Adam Schiff, sits directly across from me, and to his left sits Congresswoman Terri Sewell, with Eric Swalwell and Joaquin Castro clustered together at the far end. I’m flanked by my lawyers and my friend Shahmir Sanni, a fellow whistleblower. We give the Republicans a few minutes to show up. They never do.

It’s June 2018, and I’m in Washington to testify to the U.S. Congress about Cambridge Analytica, a military contractor and psychological warfare firm where I used to work, and a complex web involving Facebook, Russia, WikiLeaks, the Trump campaign, and the Brexit referendum. As the former director of research, I’ve brought with me evidence of how Facebook’s data was weaponized by the firm, and how the systems they built left millions of Americans vulnerable to the propaganda operations of hostile foreign states. Schiff leads the questioning. A former federal prosecutor, he is sharp and precise with his lines of inquiry, and he wastes no time getting to the heart of the matter.

Did you work with Steve Bannon? Yes.
Did Cambridge Analytica have any contacts with potential Russian agents? Yes.
Do you believe that this data was used to sway the American electorate to elect the president of the United States? Yes.

An hour goes by, then two, then three. I chose to come here of my own accord and to answer these questions about how a liberal, gay twenty-four-year-old Canadian found himself part of a British military contractor developing psychological warfare tools for the American alt-right. Fresh out of university, I had taken a job at a London firm called SCL Group, which was supplying the U.K. Ministry of Defence and NATO armies with expertise in information operations. After Western militaries were grappling with how to tackle radicalization online, the firm wanted me to help build a team of data scientists to create new tools to identify and combat extremism online. It was fascinating, challenging, and exciting all at once. We were about to break new ground for the cyber defenses of Britain, America, and their allies and confront bubbling insurgencies of radical extremism with data, algorithms, and targeted narratives online. But through a chain of events that unfolded in 2014, a billionaire acquired our project in order to build his own radicalized insurgency in America. Cambridge Analytica, a company few had ever heard of, a company that weaponized research in psychological profiling, managed to turn the world upside down.

In the military, when weapons fall into the wrong hands, they call it blowback. It looked as if this blowback had detonated in the White House itself. I could not continue working on something so corrosive to our societies, so I blew the whistle, reported the whole thing to the authorities, and worked with journalists to warn the public about what was going on. Sitting before this panel, jet-lagged from a transatlantic flight the day before, I still cannot help but feel on the spot as the questions grow more pointed. But several times, my attempts to explain the intricacies of the company’s operations leave everyone with puzzled faces, so I simply pull out a binder and slide it to the congressmen. What the hell, I think. I’ve come this far, so I might as well give them everything I have with me. There is no break, and the door behind me remains closed the entire time. I’m locked in a stuffy, windowless room deep underground, with nowhere to look except straight into the eyes of these members of Congress as they all try to figure out what the hell just happened to their country.

Christopher Wylie has been called “the millennials’ first great whistleblower” and “a pink-haired, nose-ringed oracle sent from the future.” He is known for his role in setting up—and then taking down—Cambridge Analytica. His revelations exposing the rampant misuse of data rocked Silicon Valley and led to some of the largest multinational investigations into data crime ever. Born in British Columbia, Canada, he studied law at the London School of Economics before moving into cultural data science and fashion trend forecasting. He lives in London, England. 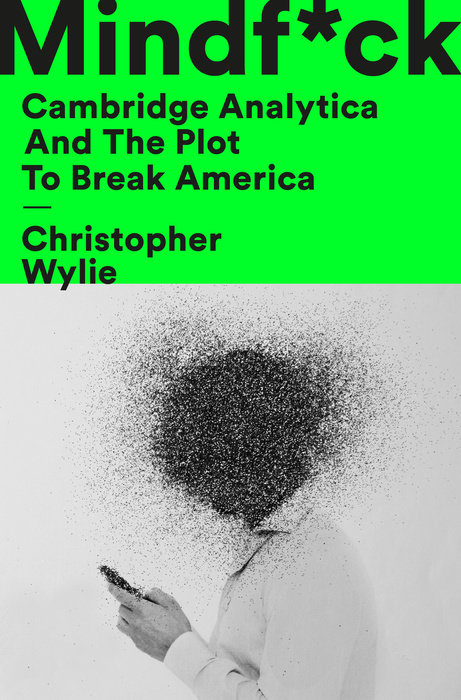