A deadly underground game might just be altering reality itself in this all-new adventure set in the world of the hit Rabbits podcast.

NAMED ONE OF THE BEST BOOKS OF THE YEAR BY THE WALL STREET JOURNAL • “A wild ride . . . impossible to put down.”—Publishers Weekly (starred review)

It’s an average work day. You’ve been wrapped up in a task, and you check the clock when you come up for air—4:44 p.m. You check your email, and 44 unread messages have built up. With a shock, you realize the date is April 4—4/4. And when you get in your car to drive home, your odometer reads 44,444.

Coincidence? Or have you just seen the edge of a rabbit hole?

Rabbits is a mysterious alternate reality game so vast it uses the entire world as its canvas.

Since the game started in 1959, ten iterations have appeared and nine winners have been declared. The identities of these winners are unknown.

So is their reward, which is whispered to be NSA or CIA recruitment, vast wealth, immortality, or perhaps even the key to the secrets of the universe itself.

But the deeper you get, the more dangerous the game becomes. Players have died in the past—and the body count is rising.

And now the eleventh round is about to begin.

Enter K—a Rabbits obsessive who has been trying to find a way into the game for years. That path opens when K is approached by billionaire Alan Scarpio, rumored to be the winner of the sixth iteration. Scarpio says that something has gone wrong with the game and that K needs to fix it before Eleven starts, or the whole world will pay the price.

Two weeks after that, K blows the deadline: Eleven begins.

And suddenly, the fate of the entire universe is at stake.

An excerpt from Rabbits

The Scene in the Magician’s Arcade

“What do you know about the game?”

The smiles vanished from the assembled collection of conspiracy hounds and deep Web curiosity seekers, their private conversations stopped mid-­sentence, their phones quickly stashed into a variety of backpacks and pockets, each of them doing their best to look cool and disaffected while unconsciously leaning forward, ears straining, eyes bright with anxious anticipation.

This was, after all, why they were here.

This was what they came for, what they always came for. This was the thing they spoke about in inelegant lengthy rambles in their first Tor Browser Web forum experience, the thing they’d first stumbled upon in a private subreddit, or a deep-­Web blog run by a lunatic specializing in underground conspiracies both unusual and rare.

This was the thing that itched your skull, that gnawed at the part of your brain that desperately wanted to believe in something more. This was the thing that made you venture out in the middle of the night in the pouring rain to visit a pizza joint–­slash–­video arcade that probably would have been condemned decades ago had anybody cared enough to inspect it.

You came because this mysterious “something” felt different. This was that one inexplicable experience in your life: the UFO you and your cousin saw from that canoe on the lake that summer, the apparition you’d seen standing at the foot of your bed when you woke in the middle of the night on your eighth birthday. This was the electric shiver up your spine just after your older brother locked you in the basement and turned out the light. This was the wild hare up your ass, as my grandfather used to say.

“I know that it’s supposed to be some kind of recruitment test—­NSA, CIA maybe,” said a young woman in her early twenties. She’d been here last week. She didn’t ask any questions during that presentation, but after, in the parking lot, she’d stopped me and asked about fractals, and if I thought they might be related to sacred geometry (I did), or the elaborate conspiracy work of John Lilly (I did not).

She didn’t ask me anything about the thing directly.

Questions about the game were most often received as whispers online, or delivered in a crowd of like-­minded conspiracy nuts, in safe spaces like comic shops or the arcade. Out in the real world, talking about it made you feel exposed, like you were standing too close to something dangerous, leaning out just a bit too far on the platform while listening to the rumble of the approaching train.

The game was the train.

“Thousands of people have died while playing,” said a thin redheaded man in his early thirties. “They sweep these things under the f***ing rug, like they never happened.”

“There are a number of theories,” I said, like I’d said a thousand times before, “and yes, some people do believe that there have been deaths related to the game.”

“Why do you call it ‘the game,’ and not by its proper name?” The woman who’d spoken was in a wheelchair. I’d seen her here a few times. She was dressed like a librarian from the fifties, glasses hanging around her neck on a beaded chain. Her name was Sally Berkman. She ran the most popular Dungeons & Dragons game in town. Original Advanced D&D.

“Phones and all other electronics in the box,” I said, ignoring Sally’s question. They loved it when I played it up, made everything feel more dangerous, more underground.

Everyone stepped forward and placed their phones, laptops, and whatever other electronics they had with them into a large cedar chest on the floor.

The chest was old. The Magician had brought it back from a trip he’d taken to Europe a few years ago. There was a graphic stamped onto the lid, some kind of ceremonial image of a hare being hunted. It was an intricately detailed and terrifying scene. There were a bunch of hunters and their dogs in the background bearing down on their prey in the foreground, but the thing that drew all your attention was the expression on the hare’s face. There was something dark and knowing about the way it stared out from the bottom of the image—­eyes wild and wide, mouth partly open. For some reason, the hare’s expression always left me feeling more frightened for the hunters than the hunted. The chest looked like it had been manufactured sometime in the 1920s or 1930s. I always used it when I did these things; its strange patina brought an authentic old-­timey-­conspiracy atmosphere to the ceremony.

Once the last phone was inside, I kicked the lid shut with a dramatic bang and pulled out an ancient reel-­to-­reel tape recorder.

I had a digital copy of the recording, of course. In fact, I’d made the reel-­to-­reel recording I was about to play from an MP3. But there’s just something romantic about analog tape. Like the cedar chest, the old tape recorder was for show, and these people had come here, to this old arcade in Seattle’s University District, for a show.

Just as I was about to press Play, I heard a voice from somewhere near the back of the room. “Is it true that you know Alan Scarpio?”

“Yeah, I know Scarpio. I mean, I met him once while I was playing the ninth iteration,” I said, trying to find the person who’d asked the question in the crowd.

There weren’t that many people here, maybe forty or fifty, but the arcade was small and the bodies were three or four deep in some places.

“Most people believe Scarpio won the sixth iteration of the game,” I said.

“Yeah, we know that. Tell us something we don’t know.”

I still couldn’t find the person speaking. It was a man’s voice, but it was hard to tell exactly where it was coming from over the drone of the videogames and pinball machines.

“Alan Scarpio is a gazillionaire playboy who hangs out with Johnny Depp,” said a young man leaning against an old Donkey Kong Jr. cabinet. “He can’t be a player.”

“Maybe he played, but there’s no evidence he won the game,” said a woman in a Titanica T-­shirt. “ ‘Californiac’ is the name listed in The Circle, not Alan Scarpio.”

“So then how do you explain his overnight wealth?” Sally Berkman replied—­a familiar challenge when it came to Scarpio. “He has to be Californiac. It just makes sense. He was born in San Francisco.”

“Oh, well, if he was born in San Francisco, he must be the guy.” Donkey Kong Man was clearly looking to stir up some shit.

“How about I just play what you’ve come all this way to hear?” I said.

If I let them go on about Alan Scarpio and whether or not he was actually Californiac, the winner of the sixth iteration of the game, we’d be here all night. Again.

I nodded in the direction of a blond curly-­haired woman standing near the front door, and she turned out the lights.

Her name was Chloe. She was a good friend of mine. She worked for the Magician.

The arcade was the Magician’s place.

It was an old speakeasy that had been converted into the arcade–­slash–­pizza joint back in the 1980s. The pizza oven had died more than a decade ago, so now it was just an arcade. Nobody understood how the Magician had been able to keep the place running through the rise of home-based and eventually hand­held computer entertainment, but keep it running he did.

The brick walls and exposed pipes in the ceiling clashed with the bright video screens and sharp 8-bit sounds of the arcade games, resulting in a strange yet perfectly comfortable blend of anachronisms.

The Magician was out of town on some kind of research trip, but he never came down for these things anyway.

He’d started letting a few of us use the place for meetings after the eighth iteration of the game. The Magician’s arcade became a kind of de facto clubhouse, an informal gathering place for those of us who remained obsessed with the game long after most everyone else had checked out.

Terry Miles is an award-winning filmmaker; creator of the Public Radio Alliance and that network’s series of hit podcasts: Tanis, Rabbits, Faerie, and The Last Movie; and co-creator of The Black Tapes. He splits his time between the dark emerald gloom of the Pacific Northwest and sunny Los Angeles. 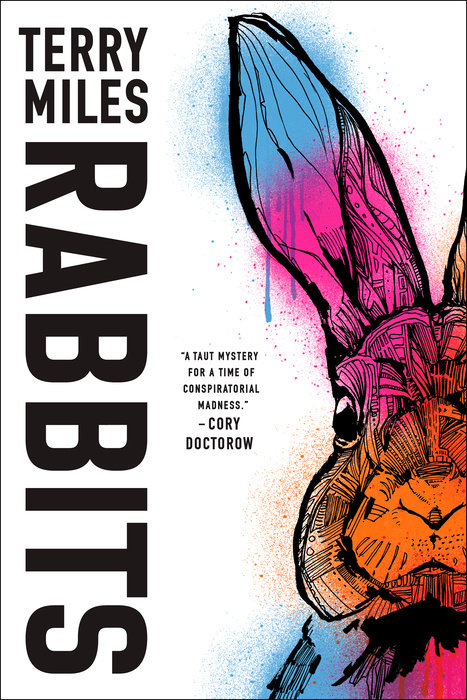