Inside the Struggle to Stop a President

NEW YORK TIMES BESTSELLER • With unparalleled reporting, a Pulitzer Prize–winning New York Times reporter chronicles the clash between a president and the officials of his own government who tried to stop him.

“A meticulously reported volume that clearly benefits from the author’s extraordinary access . . . [a] startling dissection of the Trump presidency.”—The New York Times

Donald Trump v. The United States tells the dramatic, high-stakes story of those who felt compelled to confront and try to contain the most powerful man in the world as he shredded norms and sought to expand his power. Michael S. Schmidt takes readers inside the defining events of the presidency, chronicles them up close, and records the clash between an increasingly emboldened president and those around him, who find themselves trying to thwart the president they had pledged to serve, unsure whether he is acting in the interest of the country, his ego, his family business, or Russia. Through their eyes and ears, we observe an epic struggle.

Drawing on secret FBI and White House documents and confidential sources inside federal law enforcement and the West Wing, Donald Trump v. The United States is vital journalism from a Pulitzer Prize–winning reporter that records the shocking reality of a presidency like no other. It is a riveting contemporary history and a lasting account of just how fragile and vulnerable the institutions of American democracy really are.

An excerpt from Donald Trump v. The United States

Rule of Law, Rule of Trump

One year, six months, and twelve days into the presidency

WASHINGTON, D.C.—Just before 9:30 on a brutally humid summer night in Washington, I was in a dead sprint down Connecticut Avenue toward the White House, chasing after a man who had no idea I was trying to catch him.

The math, I figured, was simple: I had to cover three city blocks in about thirty seconds before the man reached the northwest gate of the White House grounds and passed through security screening into the eighteen-acre headquarters of the United States’ executive branch, safely out of reach. I had a fifty-fifty shot of getting to him.

It definitely occurred to me that it was ridiculous that I was running down the street like a cop chasing after a robber while wearing black dress shoes, jeans, and a sport jacket. But we’d long moved beyond normal in the year and a half since Donald J. Trump had been sworn in as president of the United States and we began confronting the daily bewilderment and furor that came with him running the country. What was unfolding before us was more a rolling series of crises than a traditional presidency, and with every twist and turn it became clearer that the Trump era in America would be the story of our lives.

And so I ran in the dark after this man. Since I’d started at The New York Times two months out of college as a clerk in the sports department, I had probably done stranger things in pursuit of a story. For one of my first big assignments, I tracked George Steinbrenner, the combustible owner of the New York Yankees, as he left the stadium and headed to the parking lot after games, aiming to capture a complaint about his club that would make a headline the next day. From there, I eventually took on a beat no one else wanted—performance-enhancing drugs—and had been hired as a full-time reporter. After four years, I left sports to spend a year in the Times’ Baghdad bureau, before being moved to the Washington bureau in 2012. I covered the Secret Service, the FBI, and the Defense Department. But now, having joined a team investigating the Trump White House following the 2016 election, none of my experiences prepared me for the sheer velocity and disorientation of covering this president.

A few months earlier, it had become clear there was an emerging existential threat to Trump’s presidency. A team of investigators from a special counsel’s office was bearing down on the White House, the president wasn’t taking it well, and his volatility itself had become a matter of grave national importance. A president in trouble, whose conduct was so unpredictable, required good sourcing to understand. It pushed us to get better at cultivating and protecting our sources, so I had recently found myself chauffeuring a key witness to the chaos around the Washington metro area. At all hours of the day, I would pick the source up at airports and train stations in my mother’s fourteen-year-old Volvo station wagon for secret meetings in the only place where I could have the source’s undivided attention and guarantee him that, as we snaked aimlessly through Washington’s leafy neighborhoods and talked, no one would see us together or hear what we were saying.

Now, as for the man I was chasing down the street, he had never been a source, but I wanted badly to know everything he knew about President Trump and the inside dynamics of his administration. The man had been in the room for many of the events being investigated by the special counsel, though his significance in the unfolding saga went far beyond just passively witnessing extraordinary, possibly historic, or even criminal events in real time. Based on my reporting, the man two blocks in front of me striding back to the Executive Mansion, Donald F. McGahn II, the White House counsel, was more important to the success and survival of Trump’s presidency than anyone else in the West Wing.

McGahn was only really known to those who closely watched the administration and monitored the rising and falling cachet of the people around the mercurial president. From McGahn’s perspective, he was there to serve as the most senior lawyer responsible for counseling the president behind closed doors and helping him work the levers of power to achieve his policy goals. But because that president was Trump, this was complicated, and what McGahn actually spent his days doing amounted to trying to fit the square peg of what Trump wanted to do as he worked the levers of power through the round hole of what was legal and ethical. Trump had a profound insensitivity to how his actions would be perceived and was often indifferent to the law and precedent. He routinely staked out positions on issues that violated the law and that ran counter to what career law enforcement, intelligence, military, and economic officials believed was right. Even more mysteriously, at times Trump appeared to favor policies that benefited America’s geopolitical adversaries, like Russia, more than the United States.

McGahn was one of the few Trump advisers—or members of the Republican establishment, for that matter—who regularly stood up to the president, telling him when his ideas were harebrained and screaming back at him when he unloaded nasty digs at the senior staff. Their clashes were primal, I had been told, and when they got really bad, Trump would go for what was the ultimate insult in his book, telling McGahn that he “used to be a good lawyer.” All of this left McGahn sufficiently scarred, and he had started calling Trump “Kong,” “King Kong,” or “F***ing Kong” behind his back, in honor of the oversized gorilla from film lore who would destroy anything in his way. Despite their penchant for clashes and fireworks, McGahn had actually approved a number of Trump’s decisions that ultimately boomeranged devastatingly on the president—including some that led to the appointment of Special Counsel Robert S. Mueller III to investigate ties between Trump and Russia and Russian interference in the 2016 election. More important, McGahn had been a rare guardrail on the president—standing in the way when he sought to fire Mueller. And as much as his attempts to rein Trump in infuriated the president, McGahn was almost singularly responsible for the two greatest political accomplishments of the Trump presidency: stacking the courts with conservative judges and slashing government regulations.

McGahn wasn’t just the rare senior Trump staffer with the spine to stand up to him—there was more. I had been told there was a secret about McGahn that had the potential to drive Trump from office. A trusted source had told me that as the special counsel had accelerated the investigation of the president the previous year, McGahn had become convinced that with Trump’s fleeting sense of loyalty the president was going to make him a scapegoat. Fearing his own legal exposure, McGahn had begun cooperating with Mueller’s investigators far more extensively than the White House and Trump knew. He’d even arranged for nearly a thousand pages of handwritten White House notes to be given to investigators without the president’s lawyers or anyone else in the White House knowing—notes that provided a road map for how the president had potentially obstructed justice. By giving Mueller’s team such an unfiltered and sweeping view of the inside of Trump’s West Wing, McGahn was putting his boss’s entire presidency in peril.

Michael S. Schmidt is a two-time Pulitzer Prize–winning Washington correspondent for The New York Times. Over his fifteen years at the Times, he has covered the investigations of the Trump presidency, the Pentagon, the FBI, the Department of Homeland Security, and the war in Iraq. He started his career at The New York Times as a clerk answering the phones on the foreign desk before becoming a sports reporter covering performance-enhancing drugs and legal issues. He is a graduate of Lafayette College.

Inside the Struggle to Stop a President 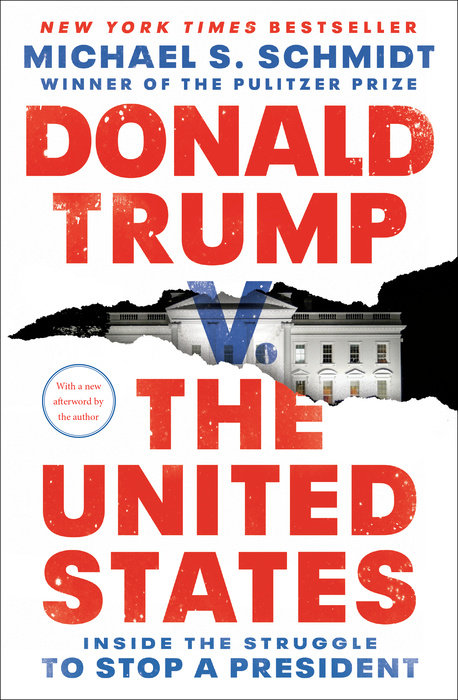