A groundbreaking account of the rise of North Korea’s Kim Jong Un—from his nuclear ambitions to his summits with President Donald J. Trump—by a leading American expert

“Shrewdly sheds light on the world’s most recognizable mysterious leader, his life and what’s really going on behind the curtain.”—Newsweek

When Kim Jong Un became the leader of North Korea following his father's death in 2011, predictions about his imminent fall were rife. North Korea was isolated, poor, unable to feed its people, and clinging to its nuclear program for legitimacy. Surely this twentysomething with a bizarre haircut and no leadership experience would soon be usurped by his elders. Instead, the opposite happened. Now in his midthirties, Kim Jong Un has solidified his grip on his country and brought the United States and the region to the brink of war. Still, we know so little about him—or how he rules.

Enter former CIA analyst Jung Pak, whose brilliant Brookings Institution essay “The Education of Kim Jong Un” cemented her status as the go-to authority on the calculating young leader. From the beginning of Kim’s reign, Pak has been at the forefront of shaping U.S. policy on North Korea and providing strategic assessments for leadership at the highest levels in the government. Now, in this masterly book, she traces and explains Kim’s ascent on the world stage, from his brutal power-consolidating purges to his abrupt pivot toward diplomatic engagement that led to his historic—and still poorly understood—summits with President Trump. She also sheds light on how a top intelligence analyst assesses thorny national security problems: avoiding biases, questioning assumptions, and identifying risks as well as opportunities.

In piecing together Kim’s wholly unique life, Pak argues that his personality, perceptions, and preferences are underestimated by Washington policy wonks, who assume he sees the world as they do. As the North Korean nuclear threat grows, Becoming Kim Jong Un gives readers the first authoritative, behind-the-scenes look at Kim’s character and motivations, creating an insightful biography of the enigmatic man who could rule the hermit kingdom for decades—and has already left an indelible imprint on world history.

From Ten-Foot-Tall Baby to International Statesman

North Korea is what CIA analysts call “the hardest of the hard targets.” The nuclear-armed country is an enduring national security threat, but the regime’s opaqueness, self-imposed isolation, robust counterintelligence practices, and culture of fear and paranoia provide at best fragmentary information, impeding the agency’s ability to inform, predict, and warn with a high level of confidence. Some of the most mundane pieces of information, such as birthdays of key regime leaders or the Kim family’s whereabouts on any given day, are hard to verify or even obtain. Although North Korea has allowed foreign journalists into the country, their movements and reporting are tightly controlled and vetted. Kernels of what might have been truth are often buried under layers of regime mythmaking, rendering it indecipherable.

Hard target or not, this is our job at the CIA. Our mission is to warn policymakers about threats to our national security, highlight potential opportunities to advance U.S. interests, and sometimes “make the call”—give the president and other U.S. officials an answer stripped of nuance and caveat to assist them in making urgent decisions. We analyze a vast array of information, from classified to open source, incorporating our knowledge of the adversary’s history, culture, language, and past negotiations with the United States. In the career section of its website, the CIA specifies how intelligence analysts “must quickly sift through data that is often inconsistent and incomplete. This is like putting together the pieces of a puzzle received at different times, from different places, and with pieces of other puzzles mixed in.” Recruits must “connect the dots” because the country and the president rely on them to analyze the information and make objective assessments, many of which will have profound consequences for the direction of policy.

When it comes to North Korea analysis, it is especially difficult to fit the puzzle pieces together. You know what the completed picture should look like when you are working on a jigsaw puzzle. You can match colors and separate out the corners and the flat edges to build the outline. As the picture takes shape, it becomes progressively easier to finish the puzzle.

Connecting the dots seems simple enough. But how do you know which dots to connect and in what sequence? What do you do with a stray dot (or two or a dozen) that doesn’t fit the big picture but seems to be outlining a different shape? Kim Jong Un’s decision in early 2018 to meet with the leaders of South Korea, China, and the United States and his comments about wanting peace after years of self-imposed isolation and belligerent behavior are an example of dots that deviate from the existing contours; many analysts are left wondering about which dots were now the ones to follow.

Intelligence analysis is difficult, and it’s not intuitive. The analyst has to be comfortable with ambiguity and contradictions, constantly training her mind to question assumptions, consider alternative hypotheses and scenarios, and make the call in the absence of sufficient information, often in high-stakes situations, so that policymakers at the top rungs of our government can make decisions about our national security.

I soon learned that a CIA analyst’s training is a never-ending process. My Langley colleagues and I were required to take courses to improve our thinking and cultivate habits that reduced the potential for overconfidence and complacency in our analysis. Walk into any current or former CIA analyst’s office and you will find Psychology of Intelligence Analysis, a slim purple book by Richards Heuer, who worked at the CIA for forty-five years in both operations and analysis. Heuer’s focus is on how intelligence analysts can overcome, or at least recognize and manage, the “weaknesses and biases” in their thinking processes. One of his key points is that analysts tend to perceive what they expect to perceive, and “patterns of expectations tell analysts, subconsciously, what to look for, what is important, and how to interpret what is seen.” An analyst’s established mindset predisposes her to think in certain ways and affects the way she incorporates new information.

Heuer’s book is pretty much the bible for our line of work. It was presented to us during our first courses as new CIA officers and often referred to in subsequent training. It still sits on my shelf at the Brookings Institution, within arm’s reach. When I happen to glance at the purple book, I am reminded about how humility is inherent in intelligence analysis—especially in studying a hard target like North Korea. It forces me to confront my doubts, remind myself about how I know what I know and what I don’t know, weigh evidence, calculate my confidence level in my assessments, and evaluate how those unknowns might change my perspective.

What, then, are the expectations and perceptions that we need to overcome to form an accurate assessment of Kim Jong Un and his regime? When the focus is on Kim’s appearance, there is a tendency to portray him as a cartoon figure. The over-the-top rhetoric from North Korea’s state media, Kim’s own often outrageous statements, and the hyperbolic imagery and boastful platitudes perpetuated by the ubiquitous socialist art and architecture have all made it too easy to reduce Kim to caricature. The baby fat still apparent on his then twentysomething-year-old face, an unflattering haircut that made waves—so to speak—in the Western press, and shapeless jackets and voluminous too-short trousers that did little to hide his girth only fed the media narrative that this was a kid who should not be taken seriously. Kim has been called—including by U.S. presidents and other elected officials—“Little Rocket Man,” “sick puppy,” “crazy fat kid,” and “Pyongyang’s pig boy.” An article in The Washington Post on December 23, 2011—just a few days after Kim Jong Un took up his deceased father’s mantle of leadership—quoted a neuroscientist who suggested that Kim’s brain had not fully matured. According to this expert, the frontal part of the brain, which is important in “restraining impulses and making long-term plans,” has not quite finished growing and developing in one’s midtwenties. This was frightening news, given the fact that a man with an apparently underdeveloped brain controlled his country’s nuclear arsenal.

Indeed, there is a veritable industry of North Korea humor. The blog Kim Jong Un Looking at Things is made up entirely of photos of Kim, well, looking at things in various locations—a shoe factory, a fishery, a lubricant machine factory churning out what looks like greasy soft-serve ice cream—as he gives his now-familiar “on-the-spot guidances.” There’s Kim on top of a mountain, looking valiantly and pensively into the sunset. There’s Kim majestically posing on a stallion. On January 18, 2016, soon after North Korea’s fourth nuclear test—Kim’s second as leader, and what he claimed to be the country’s first hydrogen bomb detonation, more destructive than an atomic blast—he was portrayed as a chubby baby on the cover of The New Yorker, playing with his “toys”: nuclear weapons, ballistic missiles, and tanks. The imagery suggests that like a child he is prone to tantrums and erratic behavior, unable to make rational choices, and liable to get himself and others into trouble.

A corollary assumption stemming from his youth was the idea that he was a reformer at heart and that because of his age his approach to the outside world could be shaped by external powers through engagement. When Kim Jong Il ascended to power in the early 1980s, the outside world had also speculated that he might be a reformer interested in modernizing his country. Citing an East German embassy assessment from 1982, Don Oberdorfer, a Washington Post reporter and author of the book The Two Koreas, wrote that Kim endorsed more fashionable clothing choices and greater consumption of alcohol. These early signs turned out to be merely cosmetic changes, not indicators that the regime was looking to make fundamental reforms.

There were more tantalizing signs that Kim Jong Un yearned to integrate North Korea into the international community and free his country from the isolation that the regime had deepened over sixty-five years. Unlike his grandfather and his father, Kim had been educated for a few years in Switzerland. North Korean media released a video that showed him at a concert in Pyongyang in which Disney characters romped around the stage while video clips of Dumbo and Snow White and the Seven Dwarfs were projected onto massive screens, and a group of skimpily clad women played the violin. He also appeared in public with his wife, Ri Sol Ju, a first for a North Korean leader; Kim’s father and grandfather avoided being seen in public with their wives or revealing too much about their personal lives. Each of these gestures was interpreted as a hopeful sign that Kim wanted to take North Korea in a new direction. His engagement with China, South Korea, and the United States since January 2018 has revived this line of thinking, even amid fresh reports about North Korea’s progress in its ballistic missile and nuclear programs. Observers find the cognitive dissonance of Kim’s actions both disconcerting and promising.

Jung H. Pak has held senior positions at the CIA and the Office of the Director of National Intelligence. She is a senior fellow and the SK-Korea Foundation Chair in Korea Studies at the Brookings Institution’s Center for East Asia Policy Studies, where she focuses on the national security challenges facing the United States and East Asia. She has written for The Atlantic, USA Today, and The Hill, and is frequently interviewed as a North Korea expert on television, in documentaries, and on podcasts. Pak received her PhD in U.S. history from Columbia University and studied in South Korea as a Fulbright Scholar. She lives in Washington, D.C. 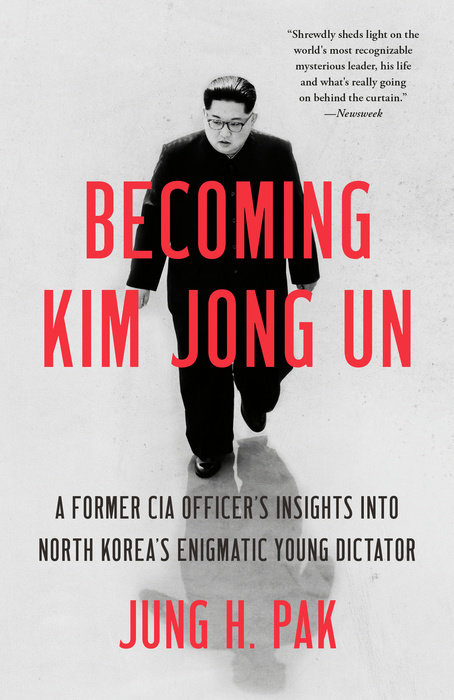