Uprooting My Life, Buying a Farm, and Learning to Bloom

“Jake Keiser is my favorite kind of woman—gutsy, tenacious, and not afraid to be vulnerable. And the animals are pretty f*cking adorable, too.”—Tara Schuster, author of Buy Yourself the F*cking Lilies

Jake Keiser was living the life in Tampa, Florida, running a high-powered PR firm and juggling drink dates, shopping sprees, and charity galas. But at age thirty-eight, following a failed marriage, a series of miscarriages, and a still-blistering breakup, she began to suffer from extreme anxiety. Hit with the realization that no amount of Botox could fill the hole in her heart, she decided to make the impulse purchase of a lifetime and bought a farm in the middle of nowhere, Mississippi.

Suddenly responsible for more than seventy-five animals and five acres of land, and with only one bar of cell service, Jake begins her search for inner peace. She learns to fix a well, haul wood, shoot a gun, and care for baby chicks, goats, turkeys, geese, dogs, and a cat, playing spa music for them when they’re sick and naming them after her favorite fashion designers. The only problem is that she still can’t figure out how to truly care for herself. Unable to escape the accumulated pain of her past, Jake hits rock bottom. With nowhere left to run, she’s finally forced to confront a bracing reality: The farm won’t save her. Only she can save herself.

Poignant, hilarious, and utterly charming, Daffodil Hill is for anyone who feels stuck—for those of us strapped to our desks and dreaming of an unconventional life, for those of us searching for something more. Most of all, it is for people who believe that the greatest love story of all is the one we write with ourselves.

An excerpt from Daffodil Hill

I planned each outfit the way celebrity stylists plan for the Oscars. Boats and yachts meant cover-ups and hats. Polo, depending on the side of the field, meant upscale picnic or Kentucky Derby chic. Girls’ nights out meant, well, Prada, Dior, Gucci, or some other fashionable designer. Tampa Bay was rich with see-and-be-seen events, and I lived two blocks away from everything: bars, restaurants, dress shops, a high-end movie theater, and a farmers’ market.

It was a warm, sticky October Saturday, and I was returning home with my typical farmers’ market haul of fresh cut flowers, vegetables, handmade porcini pasta, and free-range eggs. The cruelty-free movement spoke to me, but I couldn’t help wishing that the splotched, irregularly sized eggshells had the same pristine uniformity as the kind in the grocery store.

As I entered my apartment, a strong odor of fish smacked me in the face. I drew a breath through my mouth and greeted my little designer dog, Kahuna. Kahuna was an eight-year-old, seven-pound black Yorkie-poo who’d been with me since he was a puppy, ever since my divorce. I gave him a kiss while searching for air spray, scanning the shelves, the countertop, the dinette. The scent was intense. The Spanish-style detailing and soaring ceilings made the place feel like home, but I couldn’t change the fact that my apartment was sandwiched between two undesirables: to the left, a lady with a knack for stinking up the building with her cooking; and to the right, a single man with a parade of partners almost nightly. Air spray, earplugs, and a noise-canceling app had become necessary quality-of-life items.

My heartbeat quickened from anxiety as I rushed from room to room. I hated to be late to anything, but I also didn’t want to smell like my neighbor’s fish dinner. Finally, I spotted the can and walked around spraying while wiggling out of my romper. Glancing at my phone to check the time, I dashed to my closet. There wasn’t a second to lose. I had brunch with the girls. “Ten minutes until you’re late,” I sang to myself, trying not to work up a sweat in the Florida humidity. The very idea of not being on time made my lungs feel like they were filled with cement. These days, everything triggered my anxiety. But instead of crumbling under the weight, I forced myself to take a deep breath, and when I threw open my wardrobe doors, the pressure lifted. My clothes hung neatly in a row. I took a mental inventory, pairing each potential outfit with complementing accessories, from over-the-top baubles to delicate heirloom pieces. In the Tampa social scene, fashion was as much a sport as it was a science. Keeping up appearances required not only an expert knowledge of the playing field, but also a well-developed understanding of weather patterns.

I pushed past the understated Burberry and brightly colored Versace, and then my eyes landed on the perfect mix of form and function. “We have a winner!” I said to Kahuna, shimmying into an easy black maxi dress made even more perfect by a pair of hidden pockets. With a simple base, I layered on the silver statement jewelry I had purchased in Mexico, black Prada slippers, and Chanel sunglasses. After fluffing my long, chocolate brown hair, I twirled in front of the mirror, appraising the comfortable yet effortlessly sophisticated look. With a parting smile, I scooped up Kahuna and grabbed my key chain, heavy with keys.

Racing from one temperature-controlled environment to another, I moved from the lobby, to the car, to the restaurant. I arrived with five minutes to spare, the first of the group to the table, a critical bit of social maneuvering. As every socialite and Mafioso knows, having the best seat is vitally important. With a prime position, I not only had the best view of the scenery, but also a strategic advantage should an ex or a frenemy walk through the door. I’d see them before they’d see me.

After settling in and ordering a Bloody Mary, I pulled out my phone. In the three minutes since I’d last checked, I’d racked up thirteen missed texts. All from her. Laura. The reality TV “starlet.”

I took repeated deep breaths. In through the nose, out through the mouth. This was de rigueur. This was my job. I was a publicist, and she needed publicity. But did that mean I had to sacrifice my nights, weekends, and every available moment? Her never-ending calls, texts, and emails were starting to give me gray hair. I was going to have to increase my Botox dosage just to keep the worry lines at bay. She paid well, sure, but was it worth it when most of the money went toward covering the very spa treatments she drove me to need?

After shooting off a couple of messages, I attempted to ignore the magnetic pull of the flashing notification. It was a sunny, mild day, and I vowed I would relax. Defying the vibration, I turned my chair to the side, making sure to stay under the giant umbrella. I loved the sun but preferred to keep my fake tan out of its reach. Freckles were not my friend. On point, the server brought Kahuna a fresh bowl of chilled water along with my Bloody Mary. I made a mental note to increase his tip.

Relax, it isn’t that difficult, I told myself, sipping on the humid, autumn air and trying to enjoy the peaceful view of the park across the street, with its expansive banyan trees and tall slender palms. I watched the breeze make the leaves sway in a graceful hula and tuned out the noise of midmorning traffic. Instead, I listened to the sounds of people running and biking, the awkward-looking tourists on the Segway tour, the rolling bar with its boisterous pedaling occupants. The city was bustling with activity. The sidewalks were busy. The birds were busy. Even the sparkling bay water was busy. Sailboats were out in full force and dolphin fins broke the crystalline surface off in the distance. The tables around me filled quickly, and I listened to the music of several conversations in various foreign languages. The atmosphere felt sophisticated, worldly. I loved it.

Well into my second Bloody Mary, I heard the telltale click of heels. I didn’t have to look up to know it was the girls.

“Jake! Why can’t you ever just wait?! You’re so rude!” Kelly said, exasperated, dropping her huge leather purse next to her chair. A petite, blond spitfire, Kelly was a French-trained hairstylist with a penchant for extremely high heels and a knack for making any outfit look fabulous—even if it made her late every day of her life.

“Why can’t you ever be on time?” I responded tartly, sipping my cocktail.

Hugs passed from one set of toned arms to another, and phones were pulled out and placed next to plates.

“As you all know,” Kelly began, calling the brunch to order, “we’ve been trying to find some new places away from the usual Tampa crowd.” She paused, waiting for everyone to lean in. Surrounded by a circlet of gold and bronze heads, she continued. “So, last night, Jake, Angi, and I pregamed at a hotel bar.”

“Oh, that’s right!” Nicole jumped in. “How was it?” She tossed her long, red locks, the tips appearing to catch fire in the bright sunlight.

“Well, the food was amazing,” I replied. “They grow their own salad greens on the roof.”

“I’ll bet it was nice not seeing the usual suspects,” Adria joined in. Kelly nodded and went on, “We bonded with some hot businessmen. God, I love a well-dressed man.”

I laughed. “Not to mention one of them picked up our entire tab.”

The girls nodded with approval.

“I want to go with you next time,” Nicole said.

After a rustle of rejoinders, Kelly held up her hand.

“We loved it,” she agreed. “But when we ordered our last drinks, the bartender asked if we were . . .”

The girls broke into hysterics, and my pulse returned to its resting rate. But as Kelly ordered a drink, my phone started vibrating again. I peeked at the screen. Laura. I let it go to voicemail. She needed to learn to respect boundaries, and I needed to learn how to make them. My phone buzzed again. One new voicemail. I dug my nails into my palms and drank down another Bloody Mary.

Turns out, anxiety doesn’t mix well with vodka. By the time we paid the bill, my stomach felt like a lead balloon, and my breathing was shallow and quick. My palms were branded with eight half-moons, and I could feel myself about to flip from well-adjusted type A personality into bitchy and intolerant, or as my friends were kind enough to call it—“business mode.” After a closing round of hugs and air kisses, the valet brought my car. There was only one cure for my anxiety. Retail therapy.

Jake Keiser is a former city girl currently creating a fabulous farm life in Oxford, Mississippi, where she encourages healing and self-empowerment through self-reliance. Her farm is a nonprofit, where children and families come to learn about raising animals and farm life.

Uprooting My Life, Buying a Farm, and Learning to Bloom 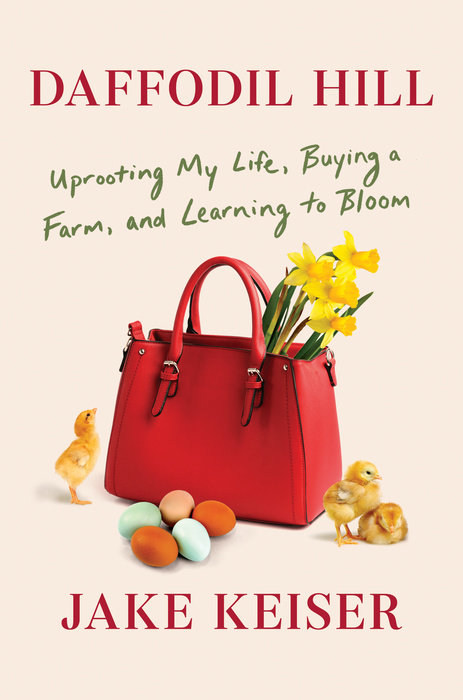