Fooled by Randomness, The Black Swan, The Bed of Procrustes, Antifragile, Skin in the Game

The landmark five-book series—all together in one ebook bundle

The Incerto is an investigation of opacity, luck, uncertainty, probability, human error, risk, and decision making when we don’t understand the world, expressed in the form of a personal essay with autobiographical sections, stories, parables, and philosophical, historical, and scientific discussions, in non-overlapping volumes that can be accessed in any order. The main thread is that while there is inordinate uncertainty about what is going on, there is great certainty as to what one should do about it.

This ebook bundle includes:
FOOLED BY RANDOMNESS
THE BLACK SWAN
THE BED OF PROCRUSTES
ANTIFRAGILE
SKIN IN THE GAME

An excerpt from Incerto 5-Book Bundle

Croesus, King of Lydia, was considered the richest man of his time. To this day Romance languages use the expression “rich as Croesus” to describe a person of excessive wealth. He was said to be visited by Solon, the Greek legislator known for his dignity, reserve, upright morals, humility, frugality, wisdom, intelligence, and courage. Solon did not display the smallest surprise at the wealth and splendor surrounding his host, nor the tiniest admiration for their owner. Croesus was so irked by the manifest lack of impression on the part of this illustrious visitor that he attempted to extract from him some acknowledgment. He asked him if he had known a happier man than him. Solon cited the life of a man who led a noble existence and died while in battle. Prodded for more, he gave similar examples of heroic but terminated lives, until Croesus, irate, asked him point-blank if he was not to be considered the happiest man of all. Solon answered: “The observation of the numerous misfortunes that attend all conditions forbids us to grow insolent upon our present enjoyments, or to admire a man’s happiness that may yet, in course of time, suffer change. For the uncertain future has yet to come, with all variety of future; and him only to whom the divinity has [guaranteed] continued happiness until the end we may call happy.”

The modern equivalent has been no less eloquently voiced by the baseball coach Yogi Berra, who seems to have translated Solon’s outburst from the pure Attic Greek into no less pure Brooklyn English with “it ain’t over until it’s over,” or, in a less dignified manner, with “it ain’t over until the fat lady sings.” In addition, aside from his use of the vernacular, the Yogi Berra quote presents an advantage of being true, while the meeting between Croesus and Solon was one of those historical facts that benefited from the imagination of the chroniclers, as it was chronologically impossible for the two men to have been in the same location.

Part I is concerned with the degree to which a situation may yet, in the course of time, suffer change. For we can be tricked by situations involving mostly the activities of the goddess Fortuna—Jupiter’s firstborn daughter. Solon was wise enough to get the following point; that which came with the help of luck could be taken away by luck (and often rapidly and unexpectedly at that). The flipside, which deserves to be considered as well (in fact it is even more of our concern), is that things that come with little help from luck are more resistant to randomness. Solon also had the intuition of a problem that has obsessed science for the past three centuries. It is called the problem of induction. I call it in this book the black swan or the rare event. Solon even understood another linked problem, which I call the skewness issue; it does not matter how frequently something succeeds if failure is too costly to bear.

Yet the story of Croesus has another twist. Having lost a battle to the redoubtable Persian king Cyrus, he was about to be burned alive when he called Solon’s name and shouted (something like) “Solon, you were right” (again this is legend). Cyrus asked about the nature of such unusual invocations, and he told him about Solon’s warning. This impressed Cyrus so much that he decided to spare Croesus’ life, as he reflected on the possibilities as far as his own fate was concerned. People were thoughtful at that time.

If You’re So Rich, Why Aren’t You So Smart?

An illustration of the effect of randomness on social pecking order and jealousy, through two characters of opposite attitudes. On the concealed rare event. How things in modern life may change rather rapidly, except, perhaps, in dentistry.

Nero Tulip became obsessed with trading after witnessing a strange scene one spring day as he was visiting the Chicago Mercantile Exchange. A red convertible Porsche, driven at several times the city speed limit, abruptly stopped in front of the entrance, its tires emitting the sound of pigs being slaughtered. A visibly demented athletic man in his thirties, his face flushed red, emerged and ran up the steps as if he were chased by a tiger. He left the car double-parked, its engine running, provoking an angry fanfare of horns. After a long minute, a bored young man clad in a yellow jacket (yellow was the color reserved for clerks) came down the steps, visibly untroubled by the traffic commotion. He drove the car into the underground parking garage—perfunctorily, as if it were his daily chore.

That day Nero Tulip was hit with what the French call a coup de foudre, a sudden intense (and obsessive) infatuation that strikes like lightning. “This is for me!” he screamed enthusiastically—he could not help comparing the life of a trader to the alternative lives that could present themselves to him. Academia conjured up the image of a silent university office with rude secretaries; business, the image of a quiet office staffed with slow thinkers and semislow thinkers who express themselves in full sentences.

Unlike a coup de foudre, the infatuation triggered by the Chicago scene has not left him more than a decade and a half after the incident. For Nero swears that no other lawful profession in our times could be as devoid of boredom as that of the trader. Furthermore, although he has not yet practiced the profession of high-sea piracy, he is now convinced that even that occupation would present more dull moments than that of the trader.

Nero could best be described as someone who randomly (and abruptly) swings between the deportment and speech manners of a church historian and the verbally abusive intensity of a Chicago pit trader. He can commit hundreds of millions of dollars in a transaction without a blink or a shadow of a second thought, yet agonize between two appetizers on the menu, changing his mind back and forth and wearing out the most patient of waiters.

Nero holds an undergraduate degree in ancient literature and mathematics from Cambridge University. He enrolled in a Ph.D. program in statistics at the University of Chicago but, after completing the prerequisite coursework, as well as the bulk of his doctoral research, he switched to the philosophy department. He called the switch “a moment of temporary sanity,” adding to the consternation of his thesis director, who warned him against philosophers and predicted his return back to the fold. He finished writing his thesis in philosophy. But not the Derrida continental style of incomprehensible philosophy (that is, incomprehensible to anyone outside of their ranks, like myself). It was quite the opposite; his thesis was on the methodology of statistical inference in its application to the social sciences. In fact, his thesis was indistinguishable from a thesis in mathematical statistics—it was just a bit more thoughtful (and twice as long).

It is often said that philosophy cannot feed its man—but that was not the reason Nero left. He left because philosophy cannot entertain its man. At first, it started looking futile; he recalled his statistics thesis director’s warnings. Then, suddenly, it started to look like work. As he became tired of writing papers on some arcane details of his earlier papers, he gave up the academy. The academic debates bored him to tears, particularly when minute points (invisible to the noninitiated) were at stake. Action was what Nero required. The problem, however, was that he selected the academy in the first place in order to kill what he detected was the flatness and tempered submission of employment life.

After witnessing the scene of the trader chased by a tiger, Nero found a trainee spot on the Chicago Mercantile Exchange, the large exchange where traders transact by shouting and gesticulating frenetically. There he worked for a prestigious (but eccentric) local, who trained him in the Chicago style, in return for Nero solving his mathematical equations. The energy in the air proved motivating to Nero. He rapidly graduated to the rank of self-employed trader. Then, when he got tired of standing on his feet in the crowd, and straining his vocal cords, he decided to seek employment “upstairs,” that is, trading from a desk. He moved to the New York area and took a position with an investment house.

Nero specialized in quantitative financial products, in which he had an early moment of glory, became famous and in demand. Many investment houses in New York and London flashed huge guaranteed bonuses at him. Nero spent a couple of years shuttling between the two cities, attending important “meetings” and wearing expensive suits. But soon Nero went into hiding; he rapidly pulled back to anonymity—the Wall Street stardom track did not quite fit his temperament. To stay a “hot trader” requires some organizational ambitions and a power hunger that he feels lucky not to possess. He was only in it for the fun—and his idea of fun does not include administrative and managerial work. He is susceptible to conference room boredom and is incapable of talking to businessmen, particularly the run-of-the-mill variety. Nero is allergic to the vocabulary of business talk, not just on plain aesthetic grounds. Phrases like “game plan,” “bottom line,” “how to get there from here,” “we provide our clients with solutions,” “our mission,” and other hackneyed expressions that dominate meetings lack both the precision and the coloration that he prefers to hear. Whether people populate silence with hollow sentences, or if such meetings present any true merit, he does not know; at any rate he did not want to be part of it. Indeed Nero’s extensive social life includes almost no businesspeople. But unlike me (I can be extremely humiliating when someone rubs me the wrong way with inelegant pompousness), Nero handles himself with gentle aloofness in these circumstances.

Nassim Nicholas Taleb spent twenty-one years as a risk taker before becoming a researcher in philosophical, mathematical, and (mostly) practical problems with probability. Although he spends most of his time as a flâneur, meditating in cafés across the planet, he is currently Distinguished Professor at New York University’s Tandon School of Engineering. His books, part of a multivolume collection called Incerto, have been published in forty-one languages. Taleb has authored more than fifty scholarly papers as backup to Incerto, ranging from international affairs and risk management to statistical physics. Having been described as “a rare mix of courage and erudition,” he is widely recognized as the foremost thinker on probability and uncertainty. Taleb lives mostly in New York.

Fooled by Randomness, The Black Swan, The Bed of Procrustes, Antifragile, Skin in the Game 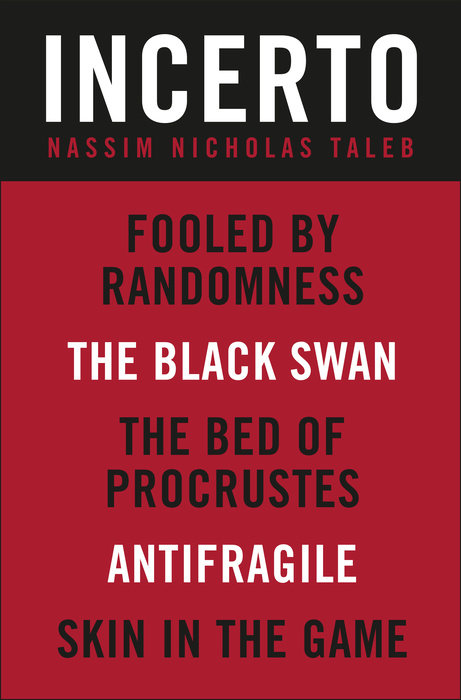