Why White Evangelicals Worship at the Altar of Donald Trump

A “masterful and meticulous”* feat of reportage that explains one of the central mysteries of the Trump era: the unholy marriage of Trump and the evangelicals, as officiated by the alt-right.

Why did so many evangelicals turn out to vote for Donald Trump, a serial philanderer with questionable conservative credentials who seems to defy Christian values with his every utterance? To a reporter like Sarah Posner, who has been covering the religious right for decades, the answer turns out to be far more intuitive than one might think.

In this taut inquiry, Posner digs deep into the radical history of the religious right to reveal how issues of race and xenophobia have always been at the movement’s core, and how religion often cloaked anxieties about perceived threats to a white, Christian America. Fueled by an antidemocratic impulse, and united by this narrative of reverse victimization, the religious right and the alt-right support a common agenda–and are actively using the erosion of democratic norms to roll back civil rights advances, stock the judiciary with hard-right judges, defang and deregulate federal agencies, and undermine the credibility of the free press. Increasingly, this formidable bloc is also forging ties with European far right groups, giving momentum to a truly global movement.

Revelatory and engrossing, Unholy offers a deeper understanding of the ideological underpinnings and forces influencing the course of Republican politics. This is a book that must be read by anyone who cares about the future of American democracy.

An excerpt from Unholy

The Blueprint for an Assault on Civil Rights

Less than two weeks into Trump’s presidency, I was leaked an explosive document: a draft executive order “establishing a government-­wide initiative to respect religious freedom” that was under White House consideration and that was being circulated inside federal agencies. As I digested the four-­page draft, I saw in it an audacious attempt to end-­run the democratic process to create, with the stroke of Trump’s pen, rights for conservative Christians that exceeded what the courts, Congress, and nearly every state legislature had ever granted them. The draft envisioned giving any person or organization—­including government employees, contractors, grantees, and not-­for-­profit and for-­profit corporations—­permission to refuse to transact virtually any type of business with someone based on their sexual orientation, gender identity, or marital status, or because they had had premarital sex or an abortion. It would have permitted such exemptions in nearly every facet of life, “when providing social services, education, or health care; earning a living, seeking a job, or employing others; receiving government grants or contracts; or otherwise participating in the marketplace, the public square, or interfacing with Federal, State or local governments.” The document derided the government as the enemy, an arrogant tyrant to religious people. “Americans and their religious organizations,” the draft read, “will not be coerced by the Federal Government into participating in activities that violate their conscience.”

Taken out of context, the draft executive order might have seemed chock-full of legalese, perhaps paranoid and excessive, and completely out of touch with mainstream twenty-­first-­century American social mores. It was not a fresh brainchild of the new Trump administration; it represented the culmination of decades of Christian right legal and political advocacy for “religious freedom.” The draft’s framing—­that an imperious, secular government was bent on stripping Christians of their rights—­had been years in the making, dating back to the 1970s. Then, in the religious right’s formative years, activists first formulated arguments that government policies promoting school desegregation were an infringement on Christians’ freedom to educate their children. But this time the government “social engineering” that was provoking the backlash was not school desegregation and associated policies but reproductive rights and the more recent, rapid advance of LGBTQ rights, including marriage equality.

The draft executive order that I had in hand seemed to capture every possible permutation of the ever-­expanding list of wrongs that religious right ideologues claimed, over several decades, had befallen Christian America. Even though it bore no indication of its author or authors, I knew it wasn’t the work of a lone zealot taking the pulse of a brand-­new administration, spitballing in the hope of getting Trump’s attention. Having monitored the methods of Christian right advocacy over the course of the preceding decade, I was well acquainted with the warnings of pastors, pundits, and politicians—­in legislative hearings, Supreme Court arguments, political rallies, and sermons—­to their foot soldiers that the government was poised to crush their religious liberty by making pharmacists fill prescriptions for emergency contraception, by forcing Christian adoption agencies to place children with same-­sex couples, or by compelling Catholic social service providers to refer clients who had been sexually assaulted for reproductive health care.

The draft executive order would allow a Christian adoption agency to refuse to place children with a non-­Christian couple. It would allow a social services contractor with the federal government, one that received taxpayer funding, to turn away a client because it objected to her private sexual activity or because she was a lesbian. It would permit a psychologist to refuse to treat a patient based on their gender identity. It would allow a landlord to evict a tenant who had had an abortion, or an accountant to refuse to prepare a lesbian couple’s tax return. It would enable every imitator of Kim Davis, the Kentucky county clerk who refused to issue a marriage license to a gay couple and became, in the process, a national Christian right hero. The draft order was the Christian right’s wish list for the Trump presidency.

When I shared the draft with constitutional law experts and civil rights lawyers, they were astounded, using words like sweeping, staggering, and blunderbuss to describe it. And while they believed the document, as drafted, was an unconstitutional violation of the separation of church and state because it would give special privileges to a particular set of sectarian religious beliefs, they still feared its impact. The Trump presidency had already begun to test all customs and norms, including the rule of law, as never before. If Trump signed the executive order, the force of that act would expose some of the country’s most vulnerable people—­including children, immigrants, and LGBTQ youth—­to religion-­driven discrimination in social services like foster care and other settings where vindicating one’s rights can be bewildering, challenging, and often impossible. “They would say this is a nondiscrimination order,” Jenny Pfizer, a lawyer at the LGBTQ rights organization Lambda Legal, told me. “We disagree. We would say being denied the ability to discriminate against others is not discrimination against you.”

The disclosure of Trump’s executive order draft rattled a civil rights community already on edge over Trump’s election, but the controversy only energized Christian right leadership to press Trump to sign it. “Mr. President,” the Heritage Foundation’s news site The Daily Signal pleaded, “Don’t Cave to Liberal Fear mongering. Protect Religious Freedom.” Leading conservatives on the powerful, agenda-­setting Council for National Policy, pleaded with the president to sign the order to protect earnest, hardworking Christians. Religious humanitarian relief organizations, adoption placement agencies, schools, and small businesses with religious owners who claimed religious objections to LGBTQ rights, abortion, and contraception were suffering under the weight of “Obama era antireligious regulations,” the letter read. They needed “protections that you can grant through an executive order to prevent federal discrimination against them for acting in accordance with their beliefs.” Fifty-­two Republican members of the House and eighteen Republican senators also weighed in, pressing Trump to sign the order. The House lawmakers’ letter echoed the charges that an overbearing, coercive federal government under Obama had stolen away God-­fearing Americans’ religious freedom. “We look forward to coordinating with your administration,” they wrote, “so that critical religious liberty and conscience protections may finally be restored to millions of Americans who have been harmed and unprotected for far too many years.”

Despite these appeals, Trump took months to make a decision. In the end, he opted for a more general edict, signed in a jubilant, sun-­drenched Rose Garden ceremony on the National Day of Prayer, which falls each year on the first Thursday in May. He gathered a dependable entourage of Christians who would vouch for his piety and dedication. Jack Graham, pastor of Prestonwood Baptist, a Southern Baptist megachurch in Plano, Texas, delivered a prayer “in the dear name of Jesus.” Pence, in an unmistakable dig at Obama, pointed out that while every president, since Harry Truman instituted the National Day of Prayer in 1952, had issued a proclamation commemorating it, “not every president has done so in the Rose Garden at the White House.” Pence then praised Trump’s piety. “Our president is a believer,” he said. “He loves his family, and he loves his country with an unshakable faith in God and the American people.” With his top spiritual adviser, the televangelist Paula White, standing behind him, smiling, nodding, and clapping with approval, Trump spoke about the importance of faith and religious tolerance—­platitudes even more empty given his executive orders designed to ban Muslim refugees from entering the United States. “We will not allow people of faith to be targeted, bullied, or silenced anymore,” he said to applause. “And we will never ever stand for religious discrimination. Never ever. Tolerance is the cornerstone of peace.” The president who, during his campaign, could not bring himself to condemn white nationalists and anti-Semites and regularly vilified Islam, consecrated an executive order granting legal protections specially crafted for his Christian right allies by inveighing about his commitment to religious tolerance.

Sarah Posner is a reporting fellow with Type Investigations. Her investigative reporting has appeared in Rolling Stone, VICE, The Nation, Mother Jones, The New Republic, HuffPost, and Talking Points Memo. Her coverage and analysis of politics and religion has appeared in The New York Times, The Washington Post, The American Prospect, Politico, and many other outlets. She graduated from Wesleyan University and has a law degree from the University of Virginia. Her story "How Trump Took Hate Groups Mainstream," published before the 2016 election, won a Sidney Hillman Foundation Award.

Why White Evangelicals Worship at the Altar of Donald Trump 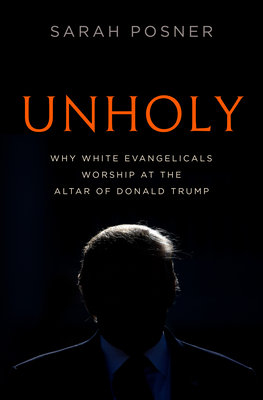