Practices in Living the Awakened Life

For the past thirty years, Deepak Chopra has been at the forefront of the meditation revolution in the West. Total Meditation offers a complete exploration and reinterpretation of the physical, mental, emotional, relational, and spiritual benefits that this practice can bring. Deepak guides readers on how to wake up to new levels of awareness that will ultimately cultivate a clear vision, heal suffering in your mind and body, and help recover who you really are. Readers will undergo a transformative process, which will result in an awakening of the body, mind, and spirit that will allow you to live in a state of open, free, creative, and blissful awareness twenty-four hours a day.

With this book, Deepak elevates the practice of meditation to a life-changing quest for higher consciousness and a more fulfilling existence. He also incorporates new research on meditation and its benefits, provides practical awareness exercises, and concludes with a 52-week program of meditations to help revolutionize every aspect of your life.

An excerpt from Total Meditation

If someone asked me what to expect from meditation, I’d reply, “Anything and everything.” Meditation involves transformation. It affects every aspect of your well-­being and can bring about positive change in your body, affect your mental outlook, increase your decision-­making ability, and eliminate worry and anxiety. Meditation techniques are numerous—­they can take you in a hundred different directions—­but at heart they aim to answer one not so obvious question: Can existence take care of itself? If the answer is no, then all the struggle and frustration that enters everyday life is justified. You believe that nothing and no one are going to take care of you except yourself. That is why you are under so much stress.

However, if the answer is yes, a new life awaits everyone. The idea that existing—­just being here right now—­can bring fulfillment sounds objectionable, almost alien. It’s not outlandish to your body, however. By their very nature, the cells in your body operate effortlessly. Likewise, your tissues and organs are effortlessly self-­sustaining. In an average lifetime the heart beats a billion times, a prospect that baffles the mind, especially if you think of the heart as a machine that must keep pumping blood seamlessly without a glitch. No computer can be turned on a billion times and no airplane take off a billion times without the risk, or even certainty, of mechanical failure. But in the web of life, the heart—­if, of course, it is healthy—­undertakes its labors with complete lack of struggle. On average, our heart beats between 60 to 100 times a minute. Fascinating when you truly think about it. But then consider a shrew’s heart, which beats 1,000 times a minute, or a hummingbird’s, which can reach 1,250 beats per minute. The wonder is, their hearts work effortlessly, too.

The heart, while extraordinary, is by no means exceptional. In a normal healthy person, the community of organs—­skin, heart, lungs, liver, brain—­remains in balance and harmony quite effortlessly. But as we go about our daily activities, we rarely experience effortless harmony, either inside ourself or between ourself and others. Wars and domestic abuse have the same source in disharmony. Our worries are a symptom of disharmony, and if depression arises, it can sap the will to carry on. The notion that existence is enough seems ludicrous. But we can experience moments of equanimity, or even an extended period of equanimity, that at their fullest bring body, mind, and spirit into harmony. These interludes suggest that something more lasting can be achieved. That’s why meditation is a journey and not just a calm break from one’s daily routine.

If we can live knowing that existence can actually take care of itself at the level of the individual person, a radically new element will be added to modern life. We can live in a world in which there are no inner enemies like fear and anger roaming the mind beyond our control. Painful memories and unacceptable feelings will no longer be shoved down into the secret hiding places in the unconscious. We will be stirred from a state of virtual sleep that befalls us as mental dullness and inertia. (If you don’t think we live in a state of virtual sleep, just look around at the expressionless faces of people glued to their smartphones or waiting at the airport.) The awakened life is energetic and fully conscious, erasing the woes that so often arise through our unconscious ways.

Personal transformation is what meditation provides once you embark on the journey. The first step is realizing that awareness in some form is always present. Thinking (in essence, judging) isn’t the mind’s true character. Awareness is. In the background of everything you do, the heart beats ceaselessly. In the background of everything you think, awareness watches ceaselessly as well. We take both for granted, but that doesn’t remove their mystery and power. A research career can be spent in cardiology just to get a few steps closer to the hidden intricacies packed in a single heart cell. (It was recently discovered, to everyone’s bafflement, that the heart has twelve taste receptors of the kind usually found in the mouth, and these receptors are most strongly attuned to bitter taste. No reasonable explanation exists, but then, we don’t even know how the heart and circulatory system manage to maintain the same blood pressure in our toes and our head, despite the force of gravity.)

Recorded history has spent millennia trying to unravel the secrets of the human mind. Still, there is no consensus about how to explain consciousness and the ability to be aware of ourselves and the world around us. There is no alternative but to delve into your own awareness, which is where meditation begins. Meditation is practically the only human endeavor that explores the mind when it has no thoughts. Everything else in philosophy and psychology—­or any other field of study—­is about thoughts. Awareness precedes thoughts, but in modern life we have reversed things so completely that everyone’s life is built upon mental activity without having the faintest idea where thoughts come from. Certainly, the brain is involved, but it hardly holds the key. Though we have made great strides in trying to understand the three-­pound gray mass in our skulls, nothing about a brain cell indicates that it is processing thoughts, feelings, and sensations. There are some amazing medical cases in which a person’s cerebral cortex, the thin layer on the outside of the brain responsible for higher thought, has been radically compressed by fluid pressure (so-­called water on the brain, or hydrocephalus) beginning in infancy, and yet the person grew up without any sign, either to themselves or to others, that mental activity was impaired. Even more rarely, a benign growth can take over half of the cranial space or more, and yet once again the person seems mentally unaffected.

We think we get along well enough not knowing where thoughts come from, but that’s not really so. In a fascinating TED talk in April 2019, a British theoretical physicist, David Deutsch, pointed out that throughout history the universe has been characterized as a war zone. In ancient societies, this war was envisioned as a war between good and evil, which became internalized in humans as good and bad impulses struggling inside us. In modern times, science has abandoned the old mythology but kept the war, making it a war between order and chaos. If this analogy sounds abstract, we can see it humanized in the current climate-­change crisis as the struggle between a sustainable planet and a wasteland.

These are all mental models, however, and they have persisted for so long, Deutsch says, that we are victims of “cosmic monotony.” Science has unwittingly continued the Old Testament notion that there is nothing new under the sun. What is the solution? Deutsch proposes that human beings are uniquely able to bring novelty into existence, which we do through new and deeper understanding. Thus as we wake up, the cosmos wakes up. In fact, Deutsch believes, the waking up has already begun, after billions of years of monotony.

The notion that human beings can make the universe wake up is very bold, but here is a physicist, someone who primarily deals with mathematical equations, putting consciousness front and center in the creative process. This extends a famous idea offered in the 1950s by the noted American physicist John Archibald Wheeler, who was the first to say that we live in a “participatory universe.” In other words, everything we think is real “out there” depends on our beliefs, perceptions, observations, interpretations, and expectations “in here.”

Leaving aside the cosmic implications, humans certainly create personal reality one individual at a time. What you make from the raw “stuff” of consciousness is unique to you. Therefore it makes perfect sense to explore how consciousness operates. There are rules and principles to be discovered, and what they determine is crucial to the way we all live our life.

DEEPAK CHOPRA™ MD, FACP, founder of The Chopra Foundation, a non-profit entity for research on well-being and humanitarianism, and Chopra Global, a modern-day whole health company at the intersection of science and spirituality, is a world-renowned pioneer in integrative medicine and personal transformation.  Chopra is a Clinical Professor of Family Medicine and Public Health at the University of California, San Diego and serves as a senior scientist with Gallup Organization. He is the author of over 90 books translated into over forty-three languages, including numerous New York Times bestsellers. His 90th book and national bestseller, Metahuman: Unleashing Your Infinite Potential (Harmony Books), unlocks the secrets to moving beyond our present limitations to access a field of infinite possibilities.  For the last thirty years, Chopra has been at the forefront of the meditation revolution and his next book, Total Meditation (Harmony Books) will help to achieve new dimensions of stress-free living and joyful living.  TIME magazine has described Dr. Chopra as “one of the top 100 heroes and icons of the century.”

Practices in Living the Awakened Life 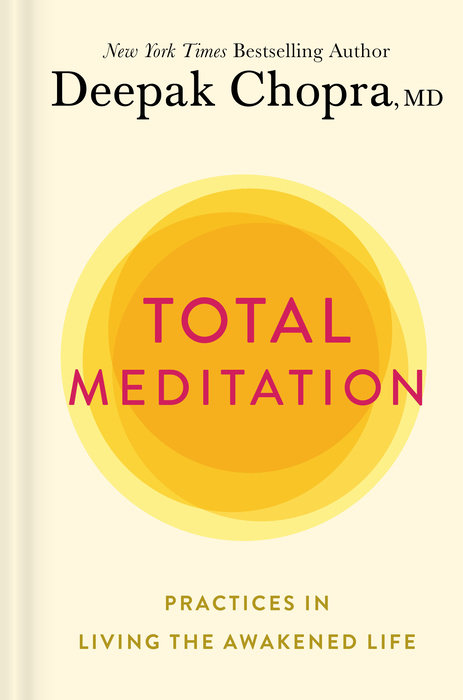